New York restaurants A to Z 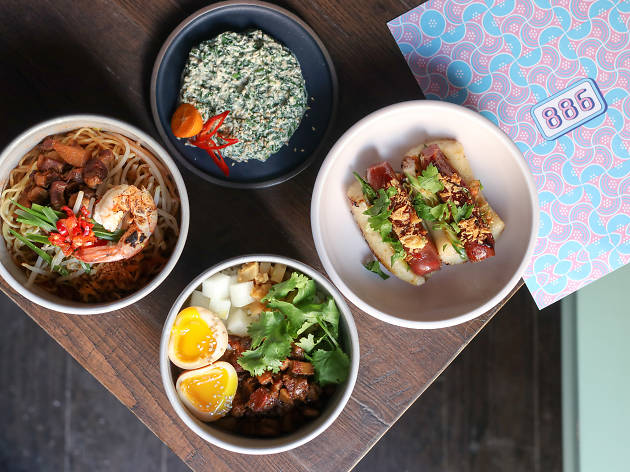 This modern Taiwanese restaurant specializes in izakaya (informal comfort fare) but with a funky twist. Chow down on playful eats, like a black-pepper steak sandwich or homemade pork sausage with cured duck yolk, in a space decked out in neon-accented decor and a multiwall mural. 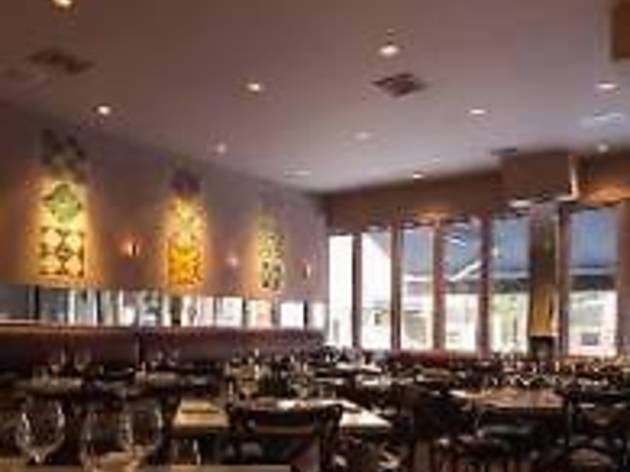 Peripatetic chef Ryan Skeen rises from the ashes yet again to head this 40-seat restaurant, decorated with handcrafted tiles on the walls and zinc-covered tables. Look out for carnivorous dishes like pig's-head-and-lobster terrine, as well as the five-seat chef's counter. Renowned sommelier Jean-Luc Le Du is behind the wine list. 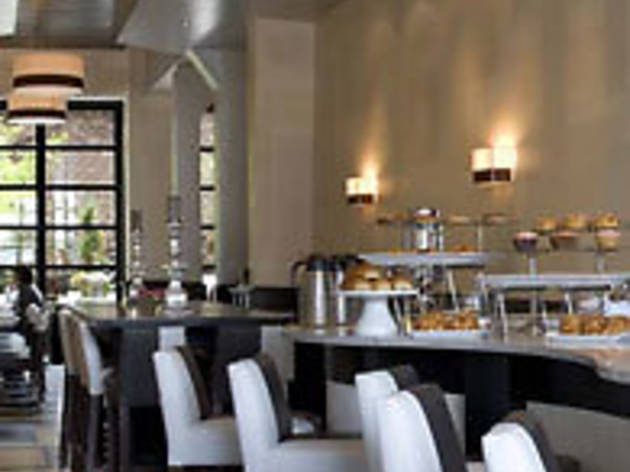 When Scott Hart and Bruce Horowytz moved to Hell’s Kitchen 15 years ago, they couldn’t find a fun bar nearby, so they opened Xth Ave Lounge. Later, they thought the neighborhood lacked fine dining, so they built 44 & X. You can guess what happened this year when they wanted a local café: It’s called 44. Like 44 proper, the space is bright and modern. You can grab a seat at the bar and down a breakfast pastry or a chocolate-and-caramel tart with malted-milk-ball ice cream, or fill up on a lunch of a roasted garlic-glazed chicken breast with Swiss chard and home fries. When warmer weather arrives, you can dine in a tranquil Japanese garden. 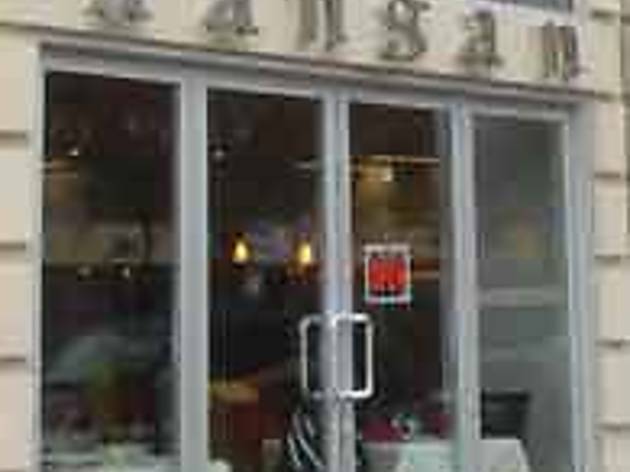 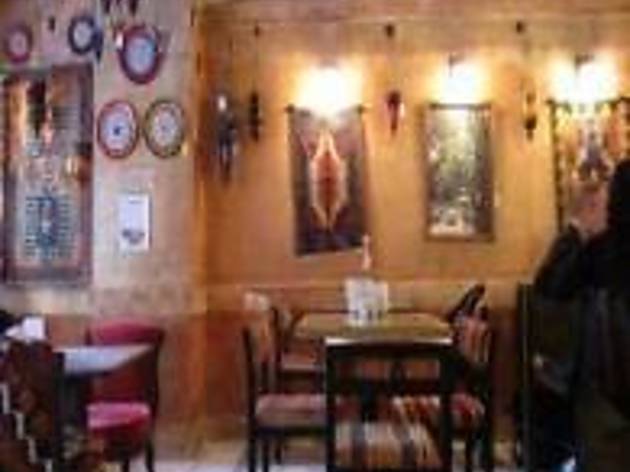 This café offers a variety of Mediterranean and Turkish dishes. 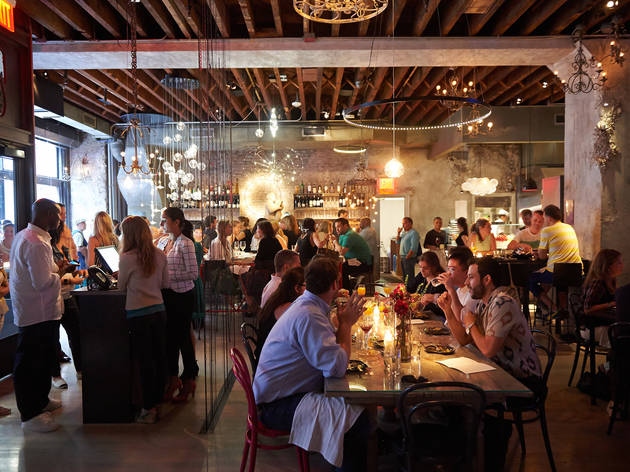 You’re sitting at a cramped communal table—the half-eaten beef-slider taco before you long soggy and uncleared—as you stare wistfully at the restaurant where you wish you were eating. Where you are is ABC Cocina, the seasonal tapas-cum-tacos spot from Jean-Georges Vongerichten and executive chef Dan Kluger; where you’d rather be is ABC Kitchen, the duo’s farm-to-table restaurant that shares a glass wall. The ABCs—both located inside ABC Carpet & Home—are the latest additions to a Jean-Georges restaurant empire as varied in cuisine as it is in execution. It includes faultless high-end French at Vongerichten’s celebrated flagship, Jean Georges; Japanese without staying power at the now-closed soba temple Matsugen; and New American that can be whimsical and deft at Perry St., but underwhelming at the sleek and snobby Mercer Kitchen. With ABC Cocina, Vongerichten has meandered out of his wheelhouse to Latin America and Spain, straying unnervingly far from the standard of excellent seasonal cooking that he and Kluger established next door. This is his Spice Market of Latin cuisine, a boisterous fun house of culture designed to please the Meatpacking crowd in a different locale. The clamorous room’s splashes of colored light, striking chandeliers and dangling woven chains smack of a G-rated bordello. Unless you snag a reservation or a table on grimy 19th Street, be prepared to wait among those drinking at and around the bar, a young crowd of tanned legs and short white dresses à la 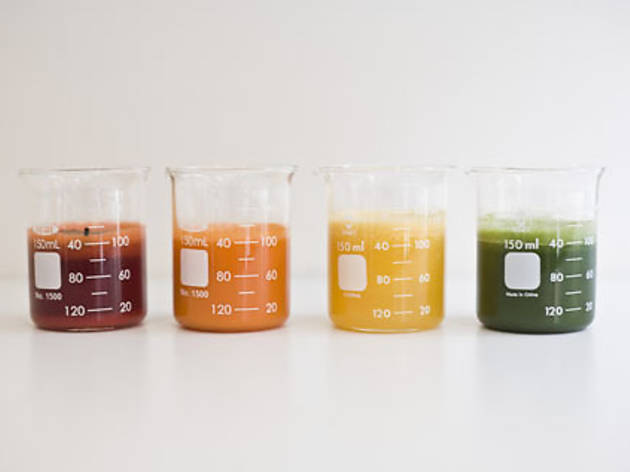 A juice and smoothie extension to Jean-Georges Vongerichten's market-driven restaurant ABC Kitchen has opened, with a similar focus on organic, seasonal produce, much of it purchased from the nearby Union Square Greenmarket. The philosophy couldn't be clearer than in a drink called the Local (pear, apple, carrot, beet, lemon, ginger and local bee pollen); other concoctions are a little more flexible in their sourcing, such as a smoothie made with hemp protein, Thai coconut meat, pineapple, agave, lime, cilantro, kale and avocado. Baked goods from the restaurant's pastry chef, Cindy Bearman, include muffins, scones and biscotti. 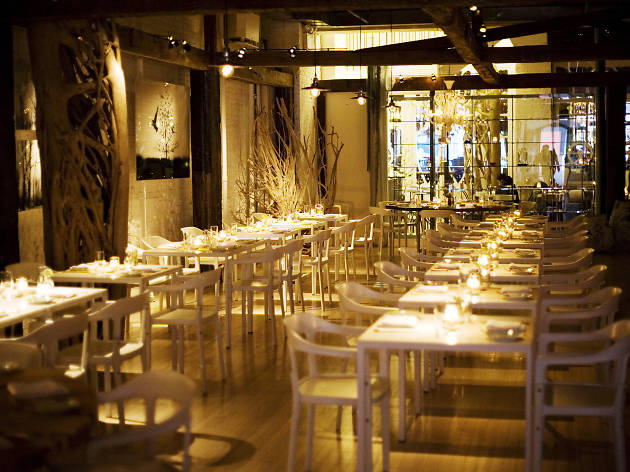 While plenty of New York restaurants have lately made the environment a priority—sourcing their ingredients locally and crafting dining rooms from salvaged materials—none have done so with quite as much visual and gastronomic panache as chef Jean-Georges Vongerichten’s ABC Kitchen. Everything, including the antique armoires, reclaimed-wood tables, porcelain plates and chandeliers entwined with flowering vines is gathered from area artisans. Though the restaurant’s sustainable ethos is outlined on the back of the menu like an Al Gore polemic, the cooking, based on the most gorgeous ingredients from up and down the East Coast, delivers one message above all: Food that’s good for the planet needn’t be any less opulent, flavorful or stunning to look at. It’s haute green cuisine. In step with fashion, the menu is a sprawling collection of small and large shareable plates—but unlike so many, it features reasonable pricing and dishes that all seem to work well together. After passing around pastas, salads, maybe a bowl of fried calamari—beautifully encrusted with crushed Martin’s Pretzels, lending an extra-crispy saline crunch—you might covet an entree all for yourself. A supremely buttery arctic char fillet, featuring skin that’s as crisp as a kettle-fried chip and nutty florets of roasted Romanesco, is certainly worth hoarding. As is a flattened golden roasted half chicken, its juicy flesh bathed in a vinegary glaze with wilted escarole and heady, butter-sopped potato puree. While 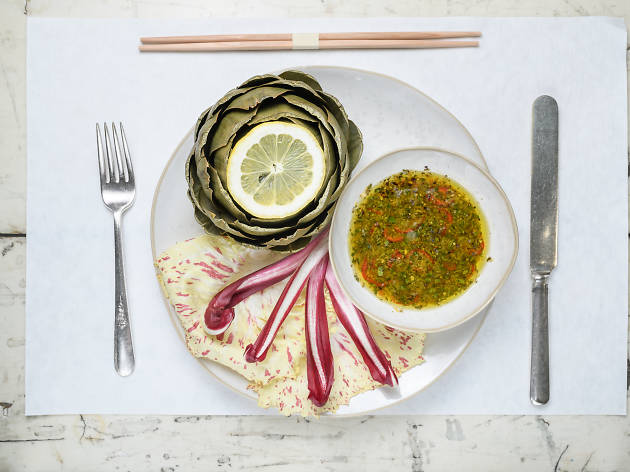 It looks like the inside of Gwyneth Paltrow’s brain: The crisp, spacious room is a Goop-y stretch of all-white furniture, with pops of color courtesy artisanal ceramic plate ware, millennial-pink wall panels and boho banquettes draped in handwoven Andean textiles that likely cost more than your rent. Each menu—already littered with wellness buzzwords like “restorative tonics” and divided into categories that include Energizing & Fresh and Warm & Sustaining—arrives with a supplementary insert chart detailing the health benefits of various vegetables. (Eggplant is “an ally to your arteries and circulation,” FYI.) This chia-bowl wonderland is ABCV, the latest expansion of Jean-Georges Vongerichten and Paulette Cole’s ABC restaurant empire (ABC Kitchen, ABC Cocina) inside Flatiron’s ABC Carpet & Home complex, and the V stands not for “vagina steaming” (sorry, Paltrow) but for “vegetables.” Though the ABC brand has always been taken with hyperfresh produce—no doubt buoyed by the complex’s proximity to the Union Square Greenmarket—ABCV is Vongerichten’s first meat-free spot, and his first ABC project without Dan Kluger in the kitchen. (Kluger left the group in 2014 to open Loring Place.) Instead, chef de cuisine Neal Harden (formerly of the prominent raw-food restaurant Pure Food and Wine) oversees the burners and challenges vegetarian eating’s bland, Bikram-yogi connotations with bold flavors and global zest. Beluga lentils thrum with black vinegar ($13), carpaccio-thin slices of 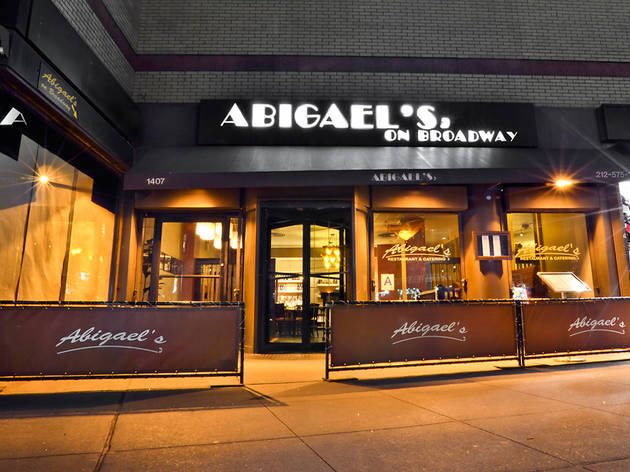 Kosher food is served with a sneer at this midtown bistro. Despite the perpetually empty dining room, we were asked to wait more than 20 minutes for a two-top. Got a question about the baffling steakhouse-sushi-Thai-Mexican-American menu? Prepare for rolling eyes from your put-upon server. The food isn’t worth the tude: Though a glistening, bone-in rib eye was rich and tender, the international fare largely flopped. We could barely tolerate cloying pad thai or gummy polenta with rubbery mushrooms. Cocktails, served in comically oversize martini glasses, are dreadful—the fruity frozen daiquiris are spring-break-style sugar bombs. But faced with a meal this unpleasant, downing a quart of booze may be the only suitable response.