The casual follow-up to Bar Bête down the block.

Almost every restaurant space in NYC has its little history—weird midtown developments notwithstanding. There are the “cursed” ones, the curious ones and the classic ones. The one at 241 Smith Street, recently the cooly warm and wonderful Jolie, is now Ruthie’s. Proprietor Marc St Jacques also operates great Bar Bête, which opened down the block in 2019 with partner Joe Ogrodnek, who ran the excellent Battersby located between those two spots for seven years until 2018.

So, at the corner of Smith and Douglass sits a building recently vacated by a beloved neighborhood bistro and newly occupied by a respected area chef with implied local market knowledge. That it oozes family-friendliness, especially before dark, is not unexpected in the area. And there wasn’t a very good burger place anywhere on Cobble Hill’s one-time restaurant row until Ruthie’s assumed the role in August.

The interior is newly stripped of its previous lived-in richness and looks about as plain as the inside of an egg carton. This is less noticeable when it’s crowded at primetime on weekends, but its too-bright lights bounce off white walls to suffuse the air on quieter school nights. The seats at the bar—which feels more oriented to dining than hanging out and drinking in spite of the rest of the place’s overall apparently casual conceit—are now fixed to the floor. There’s a long communal high-top with backless stools near the center of the room, and leathery banquettes have been swapped with wooden ones and tables to the right, and a few large, cozier (and more private) booths to the left. There’s covered seating outside.

Although only five of its one-page menu’s 23 items (which you could count as more considering variations on a grilled cheese or baked potato) are burgers, Ruthie’s is a capital Burger Place. The cheddar pickle variety’s ($20) thickly portioned patty has a mild funkiness that punches above an everyday blend, topped with horseradish mayo, sharp cheddar and the titular sweet pickles. The s.o.b. ($21) is delightfully untidy with Swiss, caramelized onions and bacon. The blue cheese is cloaked in that distinctive flavor and best left to those who have acquired the taste. And the tuna burger’s ($22) fish is so expertly prepared to a beautiful pink finish, it wishes to be unhooked from its bun, avocado, spicy greens and chili aioli and enjoyed on its own. None include fries, which is always worth an eye-roll, but, for $5 as an addition or $11 as a side, the medium-gauge beef fat potatoes are archetypal; each one possessing the ideal texture dynamic of crisp and soft, brilliantly seasoned and constructed to retain a good temperature to the last one.

The rest of the menu’s divided into snacks, plates (which are basically sides or apps), soups and salads, “the rest” (those baked potato and grilled cheese options, plus a beer-battered fluke, again, sans its soulmate chips) and weekly specials. Its occasional incongruity (honey-roasted peanuts and popcorn would make more sense at a dedicated drinking bar, and we can save discussion of their $7 and $6 price tags for another day) helps Ruthie’s jump out as a Burger Place, even though those are outnumbered a few times over. Some of the majority are perfunctory, if tickling comfort notes, like the spinach and cheese dip with tortilla chips ($12).

That same “plates” section’s seafood cocktail ($15) is a terrific mix of octopus, scallops, squid and avocado, all at the right firmness and brimming with freshness even in its cloak of zingy, low-heat-teasing sauce. It’s served in a functionally appropriate sundae glass that suffers the same aesthetic fate as most clear food vehicles, perhaps the most famously horrific of which is martini mashed potatoes and gravy: looking like a whole mess just a few bites in. This one’s tasty enough to gaze the other way, and it’d be even easier to do so if, again, the lights were lower. The Thursday pasta special ($23) also notably meets or exceeds much of what you’ll find at the many old and new Italian restaurants from here to Red Hook. Skinny spaghetti is made in-house, tossed with a mellow marinara and topped with one large, masterfully cooked, Parm-dusted meatball.

Ruthie’s printed cocktail menu is limited to whiskey drinks like the smooth and not-too-sweet Toronto ($15), which incorporates Cynar, demerara and sassafras, and the bright smash ($16) with blackberry shrub, mint and lemon. It’s a little restrictive, but, being that it’s still a bar, you can order whatever, like the perfectly fine gin martini ($15). Beer on tap includes brews from nearby Threes and Other Half. Its sensible wine selection lists a couple of chilled reds that pair nicely with burgers.

The Vibe: An everyday kind of place with better-than-routine food; busy on Fridays and Saturdays and a little quieter on weeknights.

The Drinks: Cocktails, wine and beer.

Ruthie’s is located at 241 Smith Street. It’s for dinner Tuesday-Sunday from 5pm-10pm. Brunch begins at 11am Saturday and Sunday. 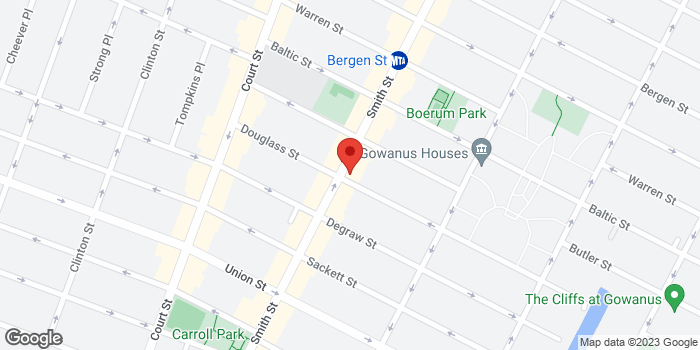 Opening hours:
Tuesday-Sunday from 5pm-10pm. Brunch begins at 11am Saturday and Sunday.