This is why people love eating in New York.

As, perhaps, the internet’s loudest “nothing is off the beaten path!” crank, I will admit that Sushi 35 West is a little hard to find.

Do not enter the office building clearly marked 224 West 35th Street. Do not take the elevator to the second floor and peer into office spaces. Instead, pass that address by a few narrow storefronts and stop at what could be confused with a service entrance if the doors were closed. This is also 224 West 35th Street, where Sushi 35 West has been operating for about four months.

On a recent visit, the doors were open, and Republican candidate for mayor Curtis Sliwa was blocking the entrance, red beret like a beacon. A small crew filming him with an iPhone moved on quick enough, revealing a couple of printed signs for the place and a staircase.

Take the staircase to the second floor and emerge into next to nothing. Head toward two patio tables and and a friendly voice might call hello from the kitchen behind a sliding window. Order the salmon roe ($6), the sea urchin ($10) the Spanish mackerel ($5) and the striped jack at a minimum, and on every return. Yes, you’re probably getting some set that ranges from a couple of rolls for $18 at lunch to the 35-piece omakase for $100, and it will all be excellent, but these four selections are essential to Sushi 35 West.

The translucent red pearls of roe gleam like gems and burst in your mouth like they should, with an exceptional, lightly saline brightness. Popping each effervescent egg is, to borrow a few phrases, like kissing a mermaid who’s high on Champagne. The rich urchin, which is more commonly described with that metaphor’s first half, is also exceptional, softening in your mouth like briny buttercream. The Spanish mackerel, too, seems to dissolve into a smoke that perfumes the space between your tongue and your palate, and the striped Jack’s peak-form texture, achieved by feathery knife work, is evidence of an expert kitchen. And it’s all served on plastic trays.

Sushi 35 West is primarily a takeaway. It just so happens that two of its owners worked at NYC’s very top sushi restaurants before the pandemic, before finding this sparse space. When you’re good, you're going to shine in any setting, and these two are great. They’re serving their beautiful, meticulously sourced fish, sliced à la minute, to people ordering mostly take out and delivery. It’s like those stories you hear about retirees finding Warhols at a yard sales.

You can dine inside, too, at those two patio tables, but they can only accommodate four total, and there is very little to look at. While some element of exposed brick, often painted white, has come to signal fledgling trendiness for restaurants that aspire to that sort of thing, that is all there is at Sushi 35 West. That and exposed pipes, a grey floor and a little peek through the window into its incredible kitchen. But it’s a peaceful blank slate compared to the chaos of midtown downstairs–one that makes it easy to be fully absorbed by the food.

The Vibe: In spite, or maybe because of its design paucity, dining in still feels warm and pleasant, and sitting there alone, eating fish eggs one by one because I didn’t want them to end, just as some goofy but effective pop song came on over unseen speakers, I’d have sworn I felt my heart move. It’s the kind of effusive atmosphere that can only be created by greatness in the kitchen.

The Food: The first time I went to Sushi Nakazawa, still one of the best sushi restaurants in NYC, I felt like I’d finally gained access to some other, better species of fish that was secretly only available to the moneyed. At Sushi 35 West, I felt like I hadn’t had anything as exquisite as what they’re serving in a long time. And, in addition to Sushi 35 West’s essential menu items, the salmon and fatty tuna are impeccable.

Time Out Tip: Even if you endeavor to dine indoors, have a back-up plan. Consider landing one of the four available seats unearned luck, not a given. Maybe the people in the offices at the other 224 West 35th Street will lend you a spot if you offer to share the 35-piece omakase. 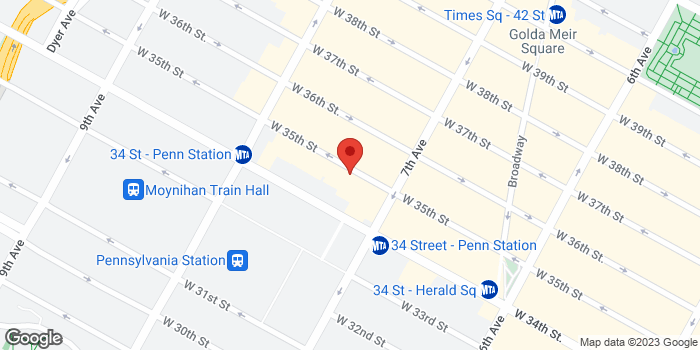