1. Don’t meet people at bars
“If you’re looking for a random fuck, going to a bar is a good idea. Bars are basically human meat markets. But if you want to meet someone you could potentially date long-term, well, news flash: Smart, successful people don’t hang out at bars. They’re too busy doing important-people stuff. Meet people through friends, at dinner parties, at gallery openings or at one of those random NYC events that always happen where someone you vaguely know is deejaying. Or just meet someone online. It’s 2012.”

2. Just ask.
“Don’t stress out about the best way to ask someone out on a date. If they like you, they’ll say yes. And if they don’t, they’ll just make fun of you to all their friends behind your back.”

3. Eat on a first date.
“Restaurants are good for first dates because you can talk and it’s not an environment centered on getting wasted. You can tell a lot about a person by where they take you. For example, if you’re headed to Chick-fil-A, get out now. Cafe Gitane(242 Mott St at Prince St; 212-334-9552, cafegitanenyc.com) is a great date spot. It’s cute, good for people-watching and it has watermelon juice. For Brooklynites, Cafe Mogador(133 Wythe Ave, between North 7th and 8th Sts, Williamsburg, Brooklyn; 718-486-9222, cafemogador.com) has total date vibes. There’s an outdoor patio that makes you feel like you’re in a different country, and the lighting is low, so you don’t have to worry about looking gross.”

4. Control your word vomit.
“Feelings are cool, but having too many too soon is creepy. No one should be using the l-word until at least three months into a relationship. That also goes for talking about babies and suburban houses—ew, total Charlotte [on Sex and the City] vibes! Also, try and save your first ‘I love you’ for when you’re drunk or high.”

5. Facebook feelings are not the same as real feelings
“Unless you’re married (or 15 years old), there is no need to blast your ‘in a relationship’ status on Facebook. If you break up, you run the risk of multiple people ‘liking’ the fact that your ex is now single, or all your cheesy friends commenting such things as ‘you go, girl’ on your newly single status (#embarrassing). And speaking of Facebook, just because you’re in love doesn’t mean you have to start updating your status with Goo Goo Dolls lyrics—thanks.”

8. Ladies, own your orgasms.
“Did you know that only 30 percent of women have an orgasm during intercourse? That’s not a high percentage. (Thanks a lot, evolution!) If you can’t come during sex, don’t worry. Your vagina is not broken. Most guys still don’t get this. They think they can just shove their dick in a bunch of times and we will have an orgasm, but actually it just feels like we’re inserting a tampon on repeat forever. Don’t be afraid to masturbate in front of a guy, or touch your clit during sex. Most guys can’t get you there by themselves, so it’s up to you to help them out.”

9. Kink: Just do it.
“Generally speaking, it’s a good idea to be curious and try new things. This goes for sexual stuff as well. If you’re dating someone and you find out they have a weird fetish, don’t freak out. This is a good thing. Think of it as an opportunity to not be so boring for a second. Be spontaneous! Unless your lover’s fetish involves shit or flowing blood, I say suck it up and try it.”

10. Be fabulous.
“Finally, the real secret to dating—and life—is to be the most amazing version of you possible. It sounds corny, but it’s true! Don’t be one of those people who sit around smoking weed, doing nothing and hating the world all day because you don’t have someone who loves you. Be the sort of person who takes vitamins, reads books, goes jogging and gives mind-blowing head. All you have to do is be fabulous, and everyone will want to fuck you.” 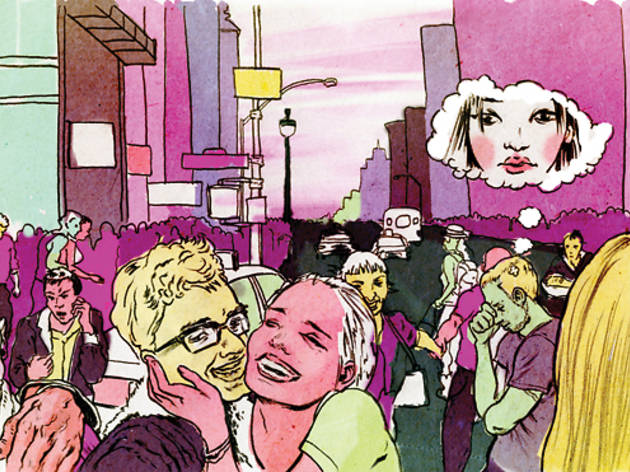 We examine characteristics of various NYC singles and couples. Recognize anyone? Chastity belters Likes: Serious talks, vetting engagement party photographers, buying the cowDislikes: Loose morals, giving away the milkAnalysis: The chastity belters are not old-fashioned, per se, but they subscribe to a neo-Victorian urban philosophy: While some discuss their sex lives ad nauseam among friends, they demur. While others plan a night out boozing in search of the next lay, they prefer nesting. Wanna mess around after the third date? Great. Wanna stick the p in the v? Give me a drawer and change your status on Facebook. Then we'll talk. Likers Likes: YouDislikes: N/AAnalysis: Likers are defined primarily by their puppy-dog-like interest in anyone and everyone who displays the slightest bit of affection for them. These individuals may mask wavering self-esteem by being too eager about life, which can come across as strange and suspicious to hardened, cynical New Yorkers. They are often drawn to one another, engaging in a "we adore everyone!" mentality that makes breakups close to impossible. They smile at strangers on the street. Unlikers Likes: Making shit happen, being awesomeDislikes: Articles in highbrow publications that advocate settling as the only way to navigate the dating scene in NYCAnalysis: A strong fringe group among individuals who champion refusing to settle, the unlikers are defined by their roving eyes. Call it the Goldilocks syndrome, call it the need to sow wild oats so much that their entire dating history consists of wild oats. They are the beating heart of the NYC dating world, searching not only for someone to build a life with, but someone to build a life with who is superior to the person whom you have built a life with. For the unliker, trading up is a necessary survival skill, especially when it comes to romance. Power couples Likes: The affirmation from friends and loved ones that they are, in fact, a power couple; comparisons to Jared and Ivanka, Jonathan Safran Foer and Nicole Krauss, Jay-Z and Beyonc, etc.Dislikes: Routines, quiet nights at home, noneponymous business venturesAnalysis: The shining star of any social gathering is an expertly coiffed power couple: They make you and your friends look cooler for hanging out with them, even though you're all wildly jealous of everything from their haircuts to how you imagine their sex lives, which surely must be as passionate as the secret Tumblr they share to document the various unspeakably hip things they do. Suburban urbanites Likes: Connecticut Muffin, Zipcars, the 10 o'clock newsDislikes: When people walk fast, bodegasAnalysis: The suburban urbanites genuinely love New York City, but would actually be a lot happier if they lived in Connecticut, Long Island or Westchester. They move here primarily to prove to everyone that they can live here, citing the urge to take advantage of all the "wonderful culture" and our "amazing nightlife," not to mention the "fantastic bar and restaurant scene." Then they wind up eating regularly at Max Brenner and shopping at Woodbury Commons. Exhaustion, an overwhelming distaste for crowds and an allergy to hipsters are common excuses. Long-term ballers Likes: Rocking out with their collective cock out, using the terms boyfriend and girlfriend well into middle age, rehashing the glory days of their misspent youthDislikes: Societal partnership labels, rings, cohabitation, breeding, when her friends ask why he hasn't "locked it down" yetAnalysis: In the wild, this unique breed is often misidentified as serial monogamists. But the long-term ballers don't necessarily favor lengthy, committed relationships over quick-hit hookups and one-night stands. Often they are simply content labelphobes who may have taken months (or years) of dating and screwing, exclusively, to grudgingly admit that they are, indeed, in a relationship. See more in Sex + Dating