In order to make a small business work in New York, you need all the help that you can get. Luckily, these New York restaurants and stores have a secret weapon. From paintings to Storm Troopers, these five objects bring positive energy to these New Yorkers’ place of work, in some cases just by sitting on a shelf. 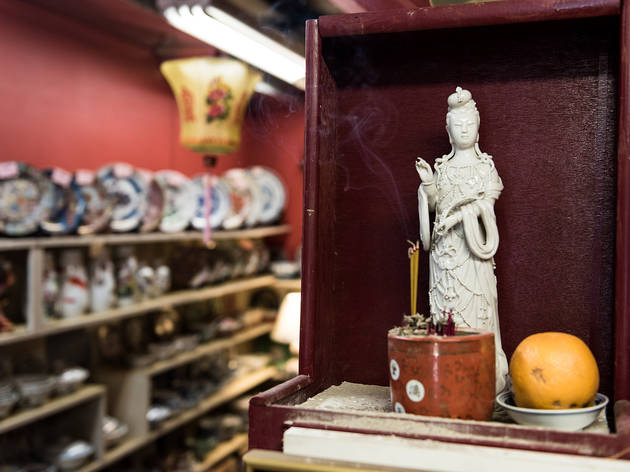 Among the many antiques and porcelain items for sale in Chinatown’s oldest store sits this statue (or Kwan Yin as she’s known in Buddhism) representing compassion. Store operator Gary Lum says his mother-in-law Nancy brought her back from one of the many trips to Hong Kong she and her husband made in the early ’70s in search of items to import for the business. This particular object was the biggest out of a special stock of Kwan Yin that Nancy found and brought back to sell, so she decided to keep it instead, as a token of prosperity and good luck. Lum says his father-in-law would bow to Kwan Yin three times every morning to ask for good blessings for every customer that the day. It’s a tradition they still keep, more than 30 years later. “It’s a way of connecting to what is bigger than us and appealing to the universe for assistance in living the best we can,” says Lum. The family considered selling the store (or “their family living room” as Lum calls it) last year, but they’re keeping it open, extending that good energy to the neighborhood—and beyond. 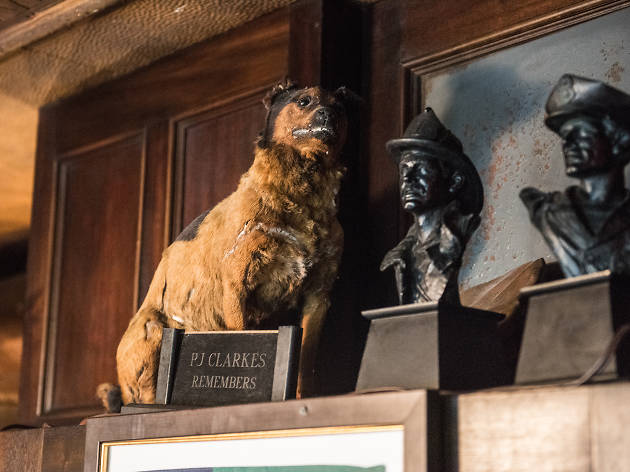 Talk about pouring one out for your dog. Above a little ledge at the entrance to the handicap bathroom at this classic midtown watering hole, next to plaques remembering police officers and firefighters killed on September 11, sits one of the bar’s most beloved patrons, a deceased, stuffed collie named Skippy. “Rumor has it, Skippy used to run the numbers to the bookie across the street while the guys were drinking here at the bar,” says general manager Mike Long. Skippy was a stray that died in the mid-’60s. Before that, and like many who’ve frequented the bar since it was first established in 1884, he always found a cool drink and familiar faces whenever he popped in. Long says the bar’s patrons felt a kind of collective ownership of Skippy, and when he died, a number of them chipped in to get him stuffed by a taxidermist. P.J. Clarke’s then became Skippy's permanent home, one over which he keeps watch day and night. “I like to joke with people that sometimes you can still hear him bark,” says Long. Good boy. 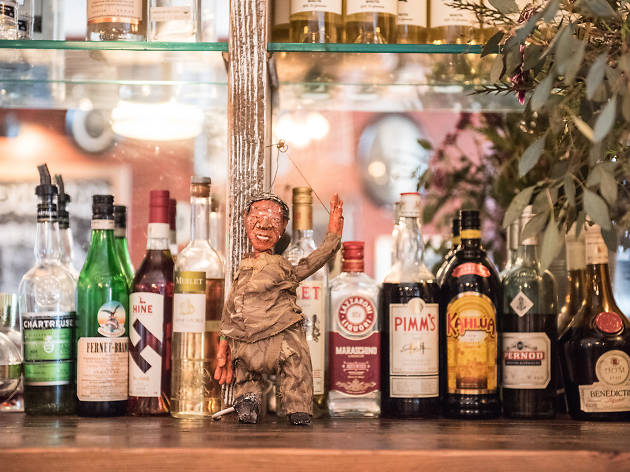 Just inside this hip Italian restaurant on the Upper East Side, you can spot a small papier-mâché figure of the first democratically elected president of South Africa, Nelson Mandela. The African icon seems a bit out of place in an establishment dedicated to pasta and sauce, but the piece has a special meaning: It was made by chef and co-owner Daniel Holzman’s artist mother, Sherry, as a unique guardian to watch over the store and, in a greater sense, the neighborhood. The figure was installed in the restaurant back in 2013, coincidently, shortly after the former president died. “Humanity can still learn much from him, and some Upper East Siders can tend to be a little insular,” says Holzman. “So we put him in as a catalyst to never forget about other things that are going on around the world.” Turns out, meatballs can widen your perspective and your waistline. 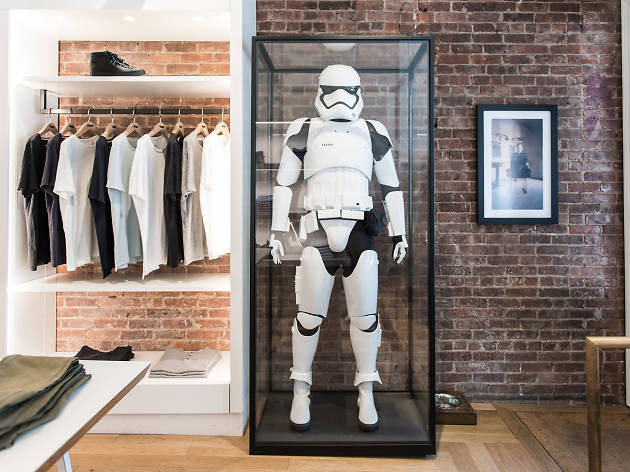 Chances are, you’ll do a quick double take while walking past the Rag & Bone men’s store on West Broadway. In the entrance stands a giant Stormtrooper, a symbol of CEO, Founder & Creative Director Marcus Wainwright’s love of—you guessed it—Star Wars. In fact, the treasured object comes directly from Lucasfilm: It was a surprise gift after Wainwright visited the studio. “I think [the company’s executives] could see I’ve been a huge fan of Star Wars for so long,” he says. When it came time to open the brand’s first Tribeca store last year, Wainwright wanted to make sure the life-size action figure, a hundred times bigger than one you’d find in a toy store, occupied a prominent space. But it seems the Stormtrooper hasn’t thwarted members of the Resistance: Luke Skywalker himself, Mark Hamill, was part of Rag & Bone’s 2016 artist profile series: “Men’s Photo Project.” 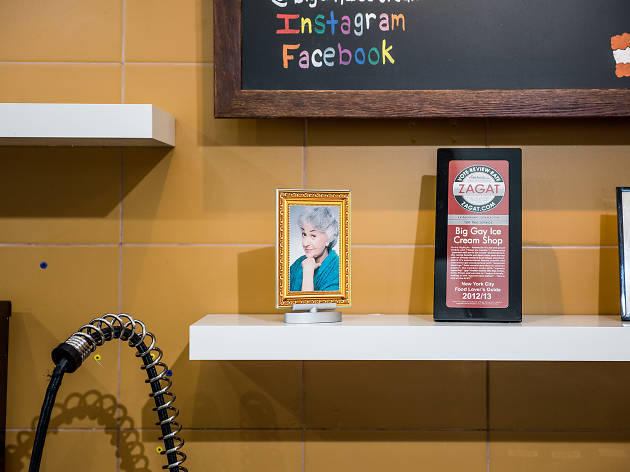 The Golden Girls has always meant a lot to Big Gay Ice Cream cofounders Doug Quint and Bryan Petroff, but when the duo heard Bea Arthur (GG’s Dorothy Zbornak) left a generous donation to the Ali Forney Center for LGBTQ youth in her will, they named their most popular ice cream creation after her. “As a young gay boy growing up, The Golden Girls was comforting to me,” says Quint. “They were like grandmothers in Florida who would always get me.” After starting their business from a food truck, Quint and Petroff decided to use that comforting spirit to guide the opening of the company’s second brick-and-mortar store in the West Village in 2012, just as it did their first in 2011 in the East Village. A customer gave them a framed picture of Arthur making her trademark did-you-really-just-say-that expression. That photo’s been sitting on the West Side store's counter ever since, and if you swing it around, you’ll see a famous (and controversial) 1991 nude portrait painted of the actress when she was 69. And the Bea lovefest doesn’t stop there: The unicorn in the window also has a picture of Arthur, fully clothed, on a necklace it wears.

Looking for your own lucky charm? 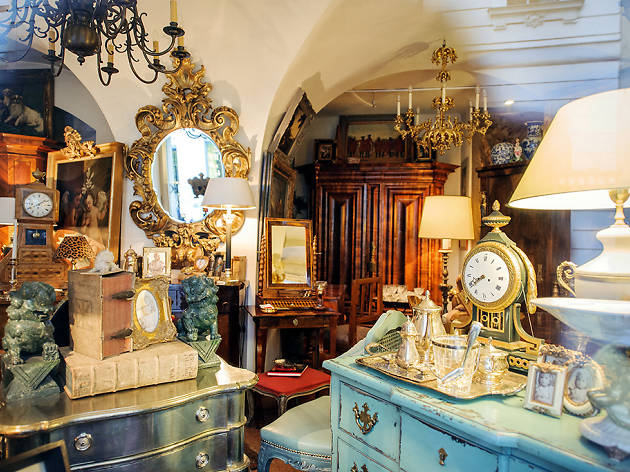 At the best antique stores in NYC, one-of-a-kind treasures are waiting to be unearthed and added to your apartment