From Death of a Salesman to All My Sons, we rank the ten best plays by the great American dramatist Arthur Miller

Arthur Miller plays—20 full-length dramas and several one-acts—form one of the greatest bodies of work of the American stage. Miller (1915–2005) was America’s Aeschylus and Ibsen, a writer of tremendous moral authority and integrity who sought to catch the conscience of a nation in tough-minded, idealistic dramas. His project was huge, and if the plays didn’t always live up to the mission, Miller left a shining example of a playwright trying to change the world and the theater. From the 1940s to the 21st century, he changed the shape of American theater. Writers such as Tony Kushner, August Wilson and Aaron Sorkin might not have found their diverse, impassioned voices if not for the example set by Miller. Miller wrote about self-deluding businessmen, morally rotten patriarchs, great men undone by their own hubris or weakness—in other words, tragedies. Many of his plays are family dramas. In his long career he won three Tony Awards (plus one for lifetime achievement) and he earned a permanent spot in the pantheon of great American playwrights. The work continues to attract great actors, such as Saoirse Ronan. Below we rank his ten best full-length plays.

The best plays by Arthur Miller 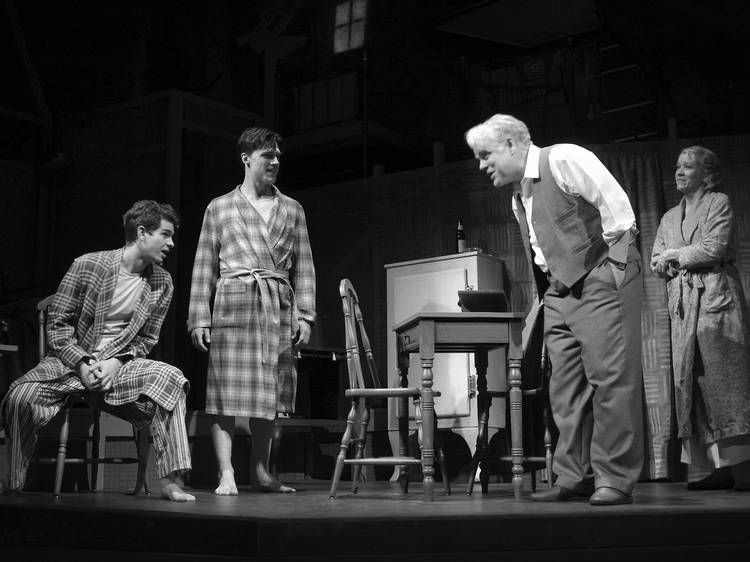 As Hamlet is to Shakespeare, so is Salesman to Miller. It’s the play that people associate foremost with him, due to its deep impact on postwar American theater and flat-out perfection in terms of construction and climax. Traveling salesman Willie Loman consoles himself and his sons Biff and Happy with lies about the American Dream, even as it becomes, for him, a waking nightmare. Expressionist in its dramaturgical design and finely psychological in its depiction of father-son conflict, Salesman is about capitalism, masculinity and the rotten foundations of modern society. It’s the blueprint for American stage tragedy. 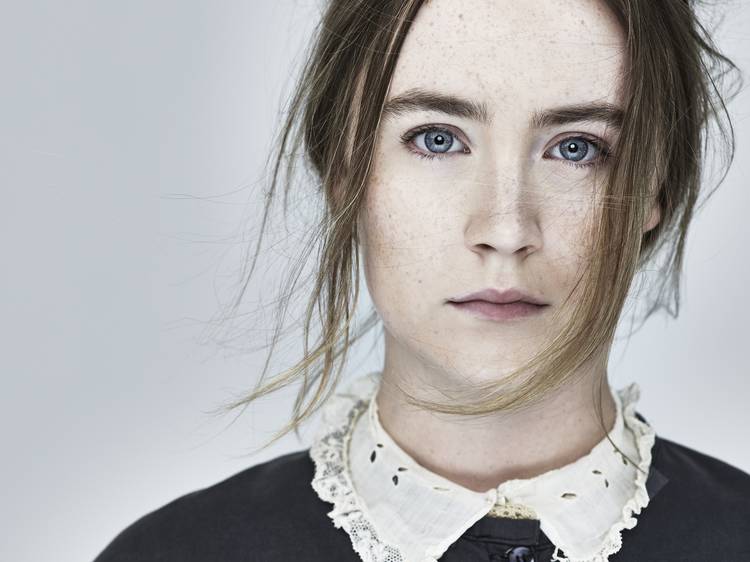 Miller’s diligently researched study of the 1692 Salem witch trials was understood as a covert critique of rampant McCarthyism and anti-Communist paranoia. Luckily, McCarthyism died and a masterpiece lives on. Farmer John Proctor, a one-time adulterer, finds his real sin grossly contrasted with the hysterical fantasies of witch-accusing children and a totalitarian court. Society tears itself apart in the attempt to balance power and freedom. The Crucible is a rigorous, emotionally wrenching political parable, and as such, speaks to any age. 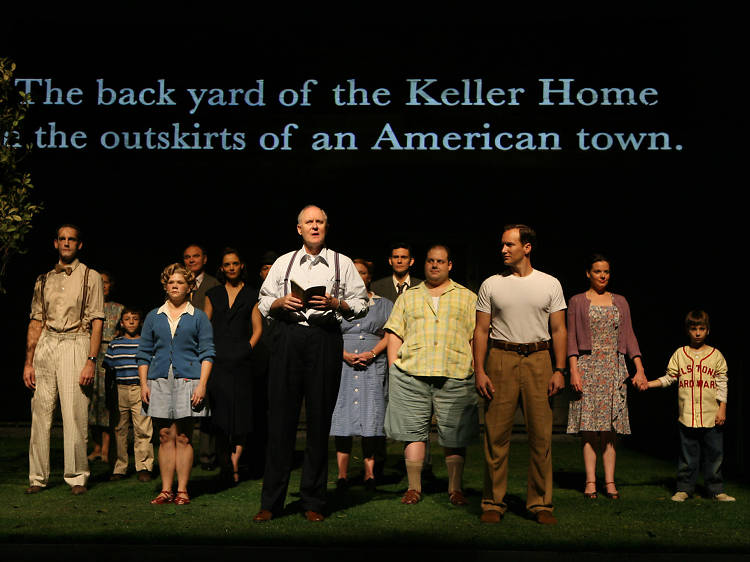 Imagine a play opening on Broadway a few years after we invaded Afghanistan and Iraq, about a government contractor and father were held accountable for negligence that led to the deaths of soldiers—including one of his sons? Hard to imagine? Well, Miller did it in 1947. His hard-hitting Ibsenite drama still stands as a gauntlet thrown down to today’s playwrights who wish to stay relevant and provocative. 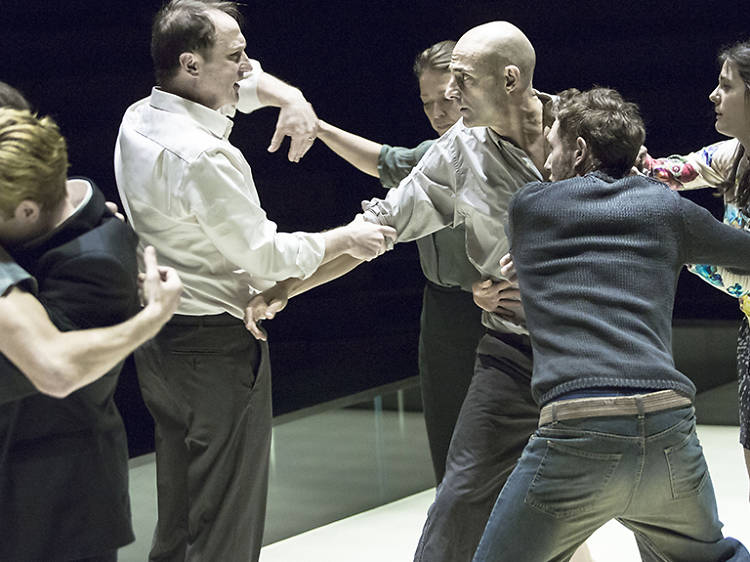 Miller always drew inspiration from ancient tragedy, and this story of an Italian-American longshoreman fatally obsessed with his young niece is as Greek as he got. He uses the Brooklyn lawyer Alfieri as a one-man chorus, and the action has the swift and terrifying inexorability of an Oedipus or Antigone. Along the way, Miller explores the strict social codes of his working-class milieu, immigration and sexual confusion. Ivo van Hove’s 2015 revival on Broadway distilled this fierce drama to its brutal essence. 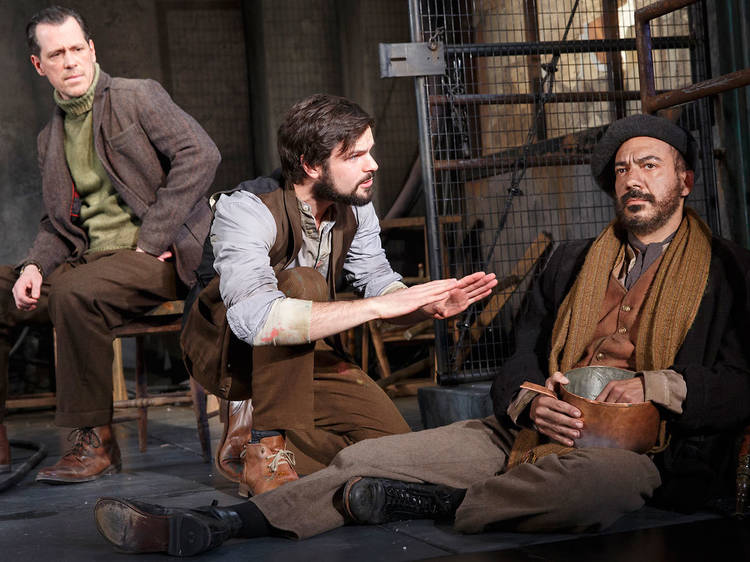 The moral questions that arose after World War II—why didn’t more Europeans resist the Nazis?—are dramatized in Miller’s one-act study of a group of detainees in occupied France suspected of being Jewish. One by one the men, culled from all levels of society, go into an office to be physically examined and questioned. The harrowing drama shows how total strangers, each with his own history, are dehumanized and demoralized by racist ideology. Only empathy can save humanity. 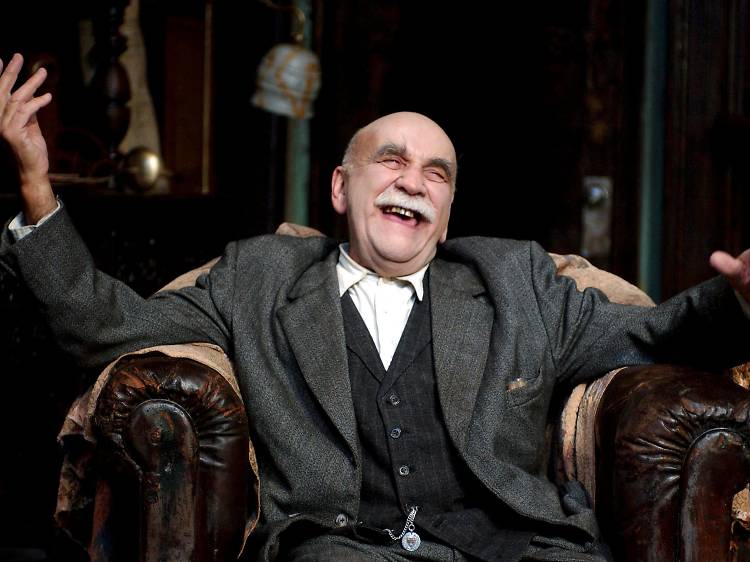 Like many of Miller’s works, The Price is a family drama, the prism through which he examines society. A middle-aged policeman enters a cluttered attic to sort through his dead father’s possessions. An aged antiques dealer arrives, and later the cop’s estranged brother, a wealthy surgeon. What follows is an inventorying and appraisal not so much of objects as people. If Miller’s political agenda was less on display than his skills as a dramatist, the piece still digs at larger social relations. 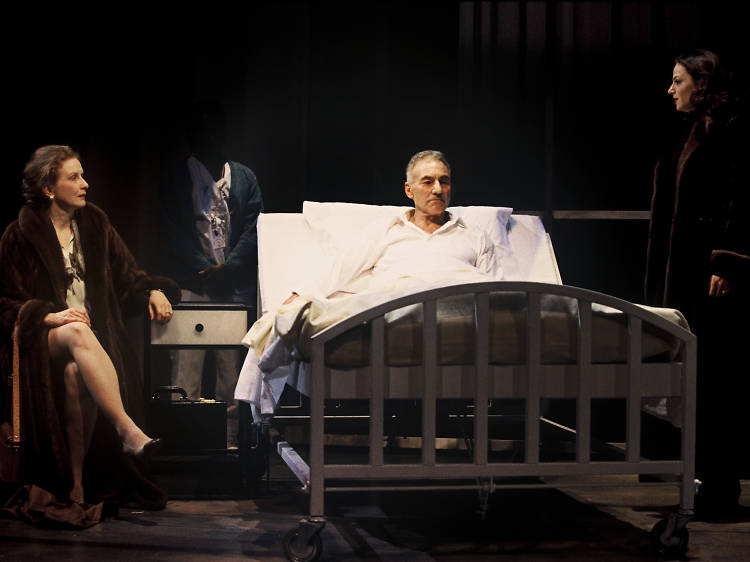 What did Miller have to say about the go-go Reagan ’80s? It’s right here in this surprisingly comical tale of Lyman Felt, an insurance agent and bigamist who keeps a wife and family in New York and another upstate in Elmira. After he survives a near-fatal car accident, both wives visit the hospitalized Lyman, and his tidy double life implodes. Despite being bedbound, Lyman (played by Patrick Stewart in Ride's 1998 U.S. debut) is up and about commenting on the action. The plot might sound like that of a French farce, but it continued Miller’s exploration of personal and public morality, especially in Reagan’s America. 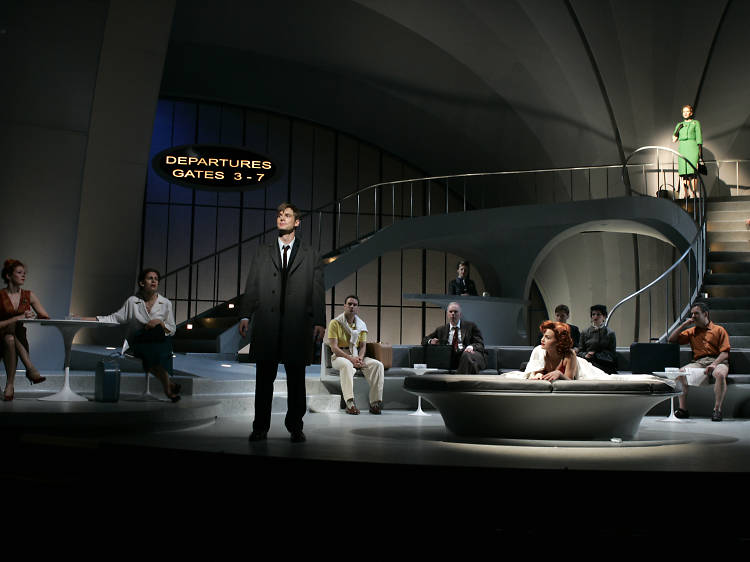 It’s no secret that this nonlinear psychodrama was the playwright’s way of making peace with his short, tempestuous marriage to Marilyn Monroe. She’s called Maggie in the play, and portrayed as an irresistible but damaged woman. Miller’s avatar, Quentin, searches his soul trying to decide whether to remarry (a different woman). While the play struck some as self-indulgent and self-serving, it offers another finely etched portrait of Miller’s favorite character type, the tormented great man. 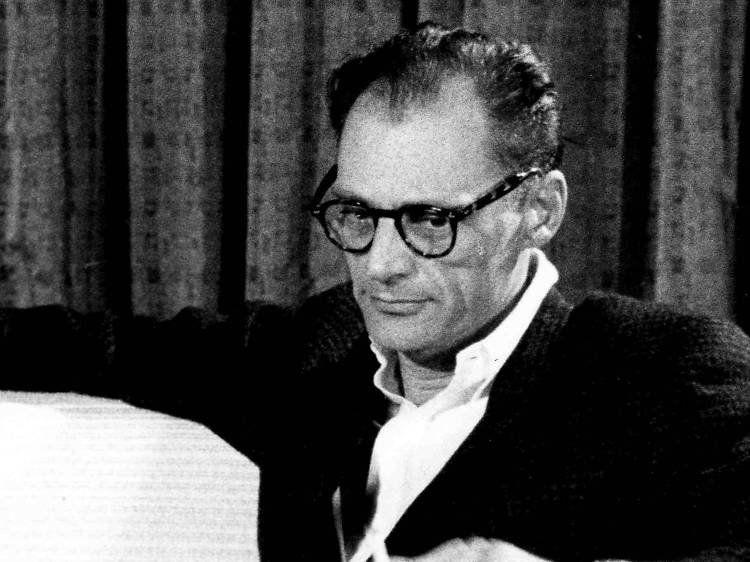 Arthur Miller. Biblical comedy. Experiencing cognitive dissonance yet? Yes, in the early ’70s, the elder statesman of social drama veered into Scripture-riffing allegory—ground already tilled by Milton, Blake and Shaw. This seriocomic retelling of the first four books of Genesis deals with one of the humankind’s greatest moral conundrums: original sin. It’s an odd but unique blend of anachronistic jokes, college-dorm philosophizing and family tragedy. 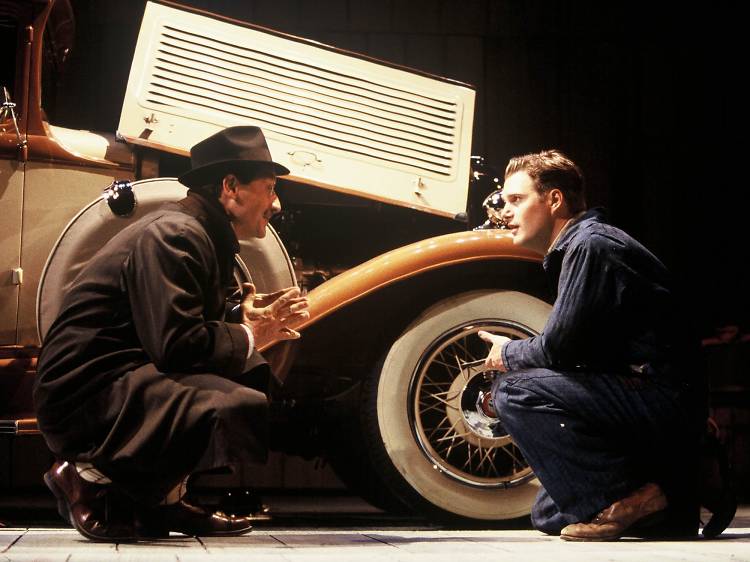 At the tender age of 29, Miller has his Broadway debut—and biggest flop—with this curious fable about an Ohio car mechanic whose uncanny good fortune leads to crippling guilt. Is the main character an allegorical stand-in for false optimism in America? Since it closed after four performances, let’s count ourselves lucky Miller didn’t give up playwriting there and then. (The Roundabout revived Man for a limited engagement in 2002.) Failure or not, the play has Miller's DNA: The promise and heartbreaking reality of success in America, the tortured relations between fathers and sons and the moral need for personal responsiblity. 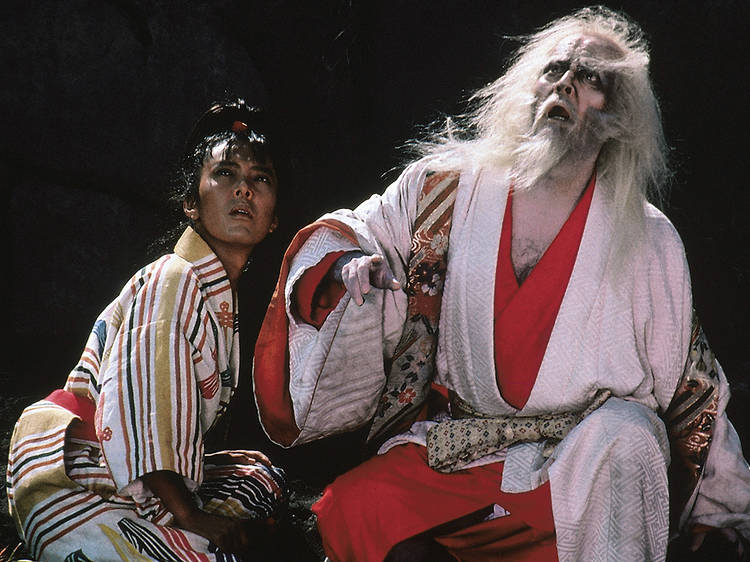 The 25 best Shakespeare movies of all time

It would seem a no-brainer: Combine the world's most revered dramatist with today's most popular medium. Alas, translating the Bard to the big screen has proved trickier than anyone ever thought. In ranking the 25 most successful attempts at Shakespeare movies, we tapped our Film and Theater experts. Their only ground rule: No plots about the playwright himself would be eligible. (Sorry, Shakespeare in Love fans). But any adaptations of the plays themselves, loose or faithful, were fair game. On our way, we found Oscar winners, foreign films and even a science fiction movie. So if top-25 lists be the food of love, read on. And if we've forgotten your favorite title, please flourish your poison pen in the comments section below.