Gary: A Sequel to Titus Andronicus 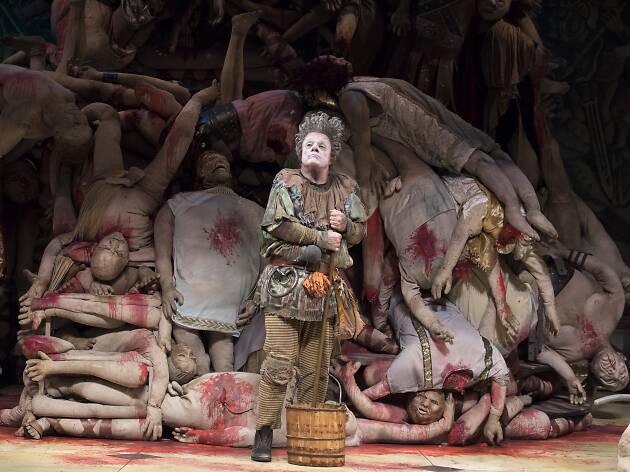 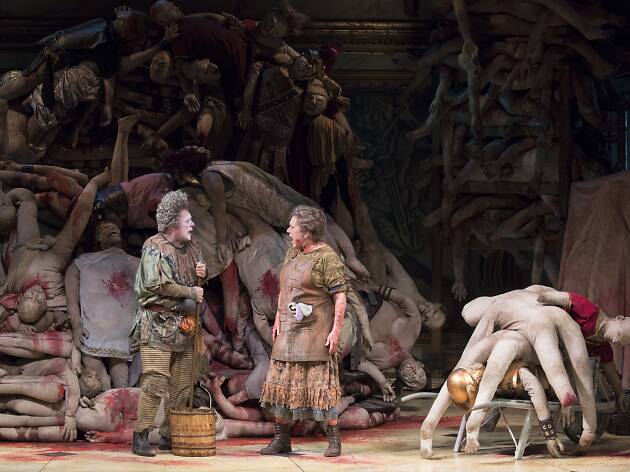 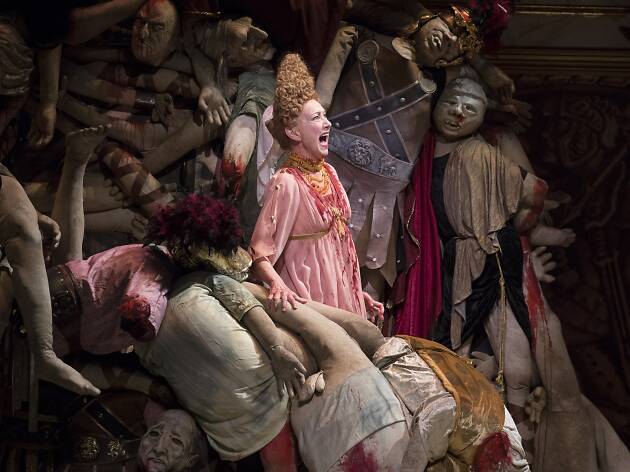 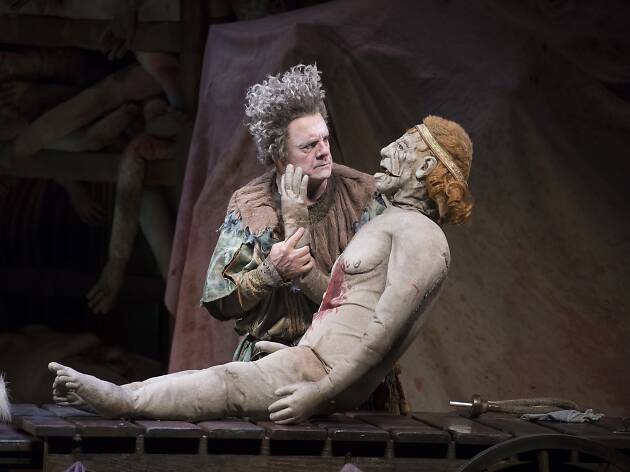 “A fool’s ambition is to change the world,” says Gary, the title character of Taylor Mac’s zany, bloody, audacious new play. Who but a fool would even try? But as Mac imagines him, Gary is not even a real fool—the worldly-wise and feeling jester familiar from Shakespearean drama, who bends the ear of the king toward justice. Rather, he is a lowly clown tasked, in Gary’s hilarious conceit, with cleaning the heaps of mutilated bodies left by the gory end of the Bard’s Titus Andronicus. (His plot summary of the earlier play: “Long story short most everybody dies.”) Beyond Gary’s white makeup, honking gag horn and Cockney accent, however, there is latent greatness, in part because he is played by the matchless stage comic Nathan Lane, whose very face suggests a composite of the classical masks of comedy and tragedy. Gary doesn’t want to stay a clown. He wants to play the fool.

Much of Gary is an outrageous mix of the grotesque and the absurd, designed to make audiences gape. Lane is joined onstage by Kristine Nielsen as Janice, a maid and a veteran of multiple massacres who has become inured to the routines of casualty maintenance: the mopping of blood, the sorting of cadavers, the draining and squeezing of fluids and gases. As in Rajiv Joseph’s Guards at the Taj and Martin McDonagh’s The Lieutenant of Inishmore, the volume of the slaughter has its own dark humor—it piles up on itself—onto which Mac shovels low-comedy shocks: fart jokes, pee jokes, penis jokes galore. But Gary is not just dirty; it is actively anticlean. “Cleaning is immoral,” Gary concludes, before concocting a plan to “revolt against tragedy” by ignoring the safe prettification that he and Janice have been assigned, and creating a grand show out of the mess instead: a more-is-more pageant of carnage. “We’re gonna make a spectacle that is its own kind of coup,” he explains. “Not a violent coup. An artistic one.”

Gary, in other words, isn’t fooling around. Like its hero, it has big plans, and like its hero's plans, they do not come off with perfect smoothness. Lane is tremendous, and Julie White is screamingly funny as the play’s third character, Carol: a middle-class midwife racked with guilt over her bystander role in one of Titus’s many subtragedies, in which her own throat was nonfatally slit. (She’s a bleeding-neck liberal.) But although Nielsen—who took over the role of Janice just before previews—wrings laughs from her signature facial aftershocks, the performance lacks variety; not all of the story’s beats play out clearly, and while George C. Wolfe’s production delivers all the flatulence a person could desire, there are stretches where it runs out of gas. Mac dreams big, as those who saw The Lily’s Revenge or the daylong marathon A 24-Decade History of Popular Music know, and Gary is a fever dream of theater that may be impossible to enact in a literal way. (According to the stage directions, “There are at least 1,000 corpses on the stage.”) The design elements, starting with Santo Loquasto’s set, are all first-class, but impressive through Wolfe’s staging is, a smaller and scrappier production might better capture Gary’s essence—the idea that plays, and the animating spirit of play itself, can be healing. But if staging Gary on Broadway is in some sense a folly, it’s the kind we could use a lot more of.