While most theatergoers spend January waiting for the spring season, with all the Tony Awards hoopla it brings, folks who attend the best Off-Off Broadway shows have other plans. Yes, festival season has rolled around; it’s Carnival for performance lovers, the Saturnalia of theater nerds. Some of the best NYC events in January are happening in Under the Radar, Coil, Prototype and other festivals. The best approach is simply to dive in: if you concentrate, you can hit your avant-garde quota for the year, rub shoulders with Scandi-glam presenters shopping for their European seasons and widen your artistic horizons as far as your brain can stand it. I’d argue that the scattershot approach is best—drop in for some radical-queer dance here, dabble in Australian performance there—but we’ve also provided this small guide, if you prefer to approach the festivals with a bit more...aim. 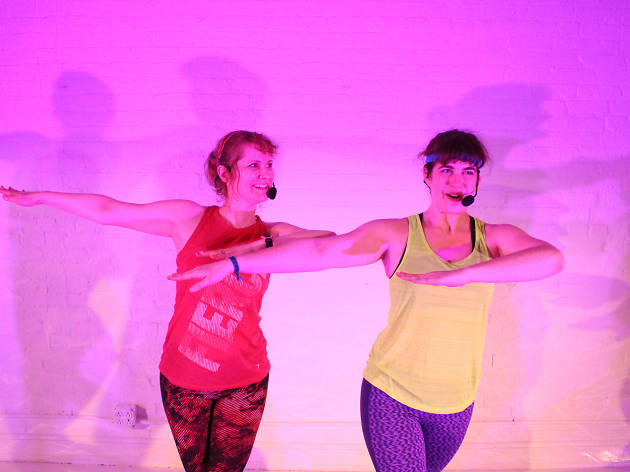 Start with the newest kid on the block: The Exponential Festival (Jan 4-31). This Brooklyn-based smorgasbord (the L is still running! Don’t be afraid!) is only in its second year, but it’s got several can’t-miss things on its roster already. The Exponential folk have the made-on-a-shoestring, aggressively odd work that has largely left the more polished Manhattan theater festivals, so your risks (and commensurate rewards) are more extreme.

WHERE TO GO: The organizers spread the work across spaces in Kings County, including the Bushwick Starr, The Brick, Chez Bushwick, JACK, and Vital Joint.

BEST BETS: The deeply strange Title:Point people have a new play Chroma Key, and if the work-in-progress showing is anything to go by, it’ll be another hilarious weird-a-thon from the folks who made last year’s brilliant Biter (Every Time You Turn Around). Other draws: Serious playwriting talent Kate Benson serves up [Porto] at the Starr, and Megan Hill offers an encore presentation of her quasi-participatory The Last Class: A Jazzercise Play, which can double as an aerobics session. Multitasking!

IF YOU WANT TO GAMBLE: For those hoping to see a host of fringe artists in quick succession, the omnibus performances at The Brick called Featuring... will let you get a crack at artists like Peter Mills Weiss and Lorelei Ramirez in appetizer-sized portions. 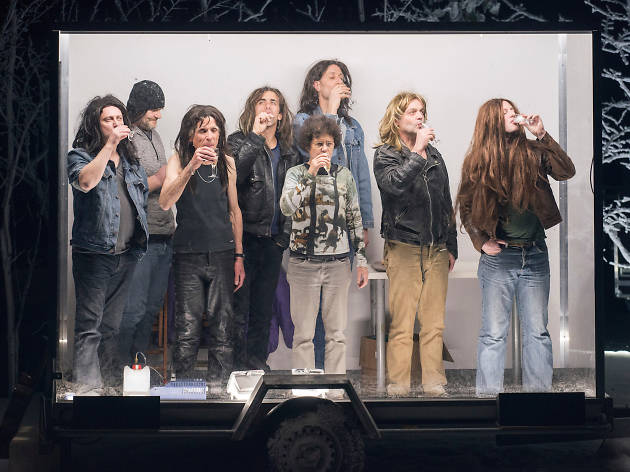 The grandpappy of ’em all is the Under the Radar Festival (Jan 4-15)—it’s the flagship that’s still afloat. Steered by its longtime curator/director Mark Russell, UTR has two main threads: it is best for those with an international, image-rich, movement-theater sort of palate or for those who enjoy autobiography filtered through boundary-pushing performance.

WHERE TO GO: The Public, mostly, though some programming is across the street at 440 Lafayette or around the corner at NYU. The events at partner venues farther afield are major, though. Waterwell is producing on the Intrepid itself, and the superstar German theatrical tricksters Rimini Protokoll will be hosting a game-slash-show called Top Secret International (State 1) at the Brooklyn Museum.

IF YOU WANT TO GAMBLE: Indonesian theater-maker Eko Nugroho’s God Bliss (In the Name of Semelah) looks like a mind-twisting mix of shadow-puppetry and video-game reality, and Tania El Khoury’s sound installation Gardens Speak lets us walk into an aural memorial for the Syrian dead—here are two multimedia works that seem to be challenging the form itself. 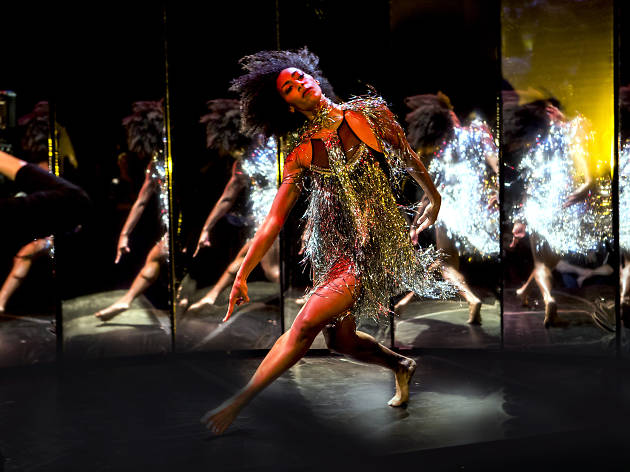 The great experimental venue P.S. 122 is just on the cusp of opening their newly refurbished space, so this is the last Coil Festival (Jan 3-22) that will be spread higgledy-piggledy all over the city. Departing P.S. artistic director Vallejo Gantner is bidding farewell with buckets of interdisciplinary movement-infused works that try to remodel the brain from the inside out—this is a good festival for audiences who like short, sharp shocks to their interpretive system.

WHERE TO GO: Where not to go? From a gallery on West 18th to La MaMa to Baryshnikov Arts Center to the School for Visual Arts to Invisible Dog in Brooklyn...Coil winds its way across the city.

BEST BETS: Start with Yehuda Duenyas’s virtual reality experience CVRTAIN (pictured above),which “puts” you on “stage” and gives you realtime feedback for your performance. Once you’ve blown your own mind, you can move on to MEETING, the robot-choreography by Australian makers Antony Hamilton and Alisdair Macindoe, or Belgian Britt Hatzius’s sensation-expanding Blind Cinema, in which a child explains a film to the blind-folded audience member. Finally, the buzziest company coming to COIL is Tim Etchells’s long-lived Forced Entertainment, who bring Real Magic, a deconstructed cabaret act that will likely be one of January’s most confident pieces.

IF YOU WANT TO GAMBLE: Smart money is on Yara Trevieso’s La Medea, which films a Latin disco-pop version of Euripides' tragedy live, and downtown auteur Daniel Fish’s mysterious project Untitled, which is seemingly indescribable. Gantner tried to explain it, and only got as far as saying, “There are screens...” before he  started making sounds and helpless gestures. Color us intrigued. 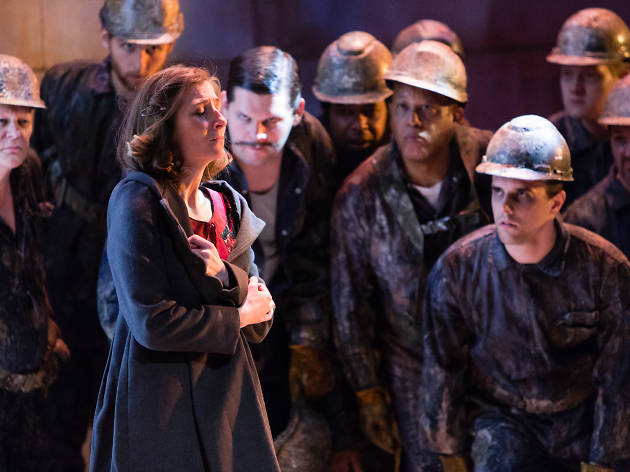 The subtitle for the comparatively small Prototype (Jan 5-15) is Opera/Theatre/Now, which has a nice demanding ring to it, right? It has the bracing effect of reminding theater-monomaniacs to get their heads the heck out of the sand and notice what's happening in what are supposedly “other” genres. For the fifth year running, Beth Morrison, Kristin Marting and Kim Whitener curate this intimate music-theater works fest, which is best for audiences who want to see chamber operas that launch the form past its gilt-and-Valkyrie past.

BEST BET: The Pulitzer Prize-winning David Lang composes anatomy theater, a musical investigation into 18th century medical texts and their attempts to locate criminality in the body. A new Lang piece is cause for celebration, even if it does entail an onstage autopsy.

IF YOU WANT TO GAMBLE: Adventurous spirits will also want to see Afrofuturist opera Funeral Doom Spiritual by M. Lamar and Hunter Hunt-Hendrix, a monodrama that moves musically from Negro spirituals into Apocalypse and back again. 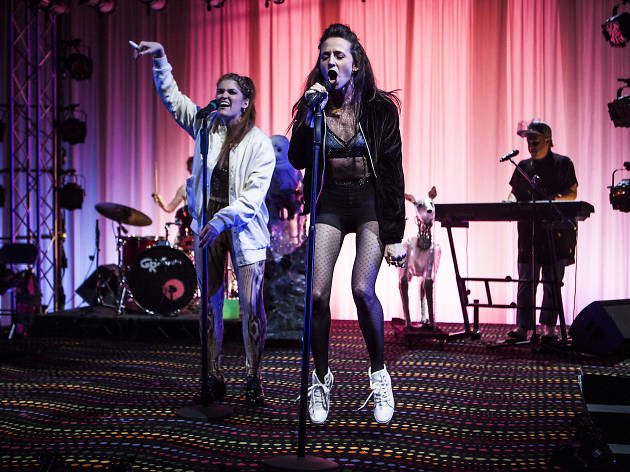 The works in the dance-forward American Realness (Jan 5-12) festival tend to lead with transgression. If someone isn’t naked and screaming at you, check your program—you may be at the wrong place. Realness rips the last shreds of decorum out of the theater and makes a joyful noise doing it; this is a performance lineup for those who want their certainties subverted and the old boring strictures of the dancing body exploded with lots of glitter.

WHERE TO GO: Founder Thomas Benjamin Snapp Pryor is taking the top position at Gibney Dance, so the festival will now include its original home at Abrons Arts Center as well as the beautiful studios at Gibney’s Agnes Varis Performing Arts Center near City Hall.

BEST BETS: The festival offers some crucial second chances: Trajal Harrell’s important voguing-meets-postmodernism work Twenty Looks or Paris is Burning at the Judson Church (S) returns to a hungry public, and while Tina Satter’s nutty rock-fable Ghost Rings seemed a little lost at New York Live Arts, we’re very eager to see if its loopy charms intensify in a space better suited to it. Other draws: Big Dance Theater puts the inimical Paul Lazar through a series of John Cage exercises; Ivo Dimchev performs a catalogue of songs from his long life in art; the great Meg Stuart returns from life abroad with selections from her solo choreography.

IF YOU WANT TO GAMBLE: Ah, here we’re spoiled for choice, but if we have to just pick one....let it be Ligia Lewis, who presents her minor matter, a dance work that models a new minoritarian politics. This January, that may be just what we need.