Every summer, people flock to Central Park in New York to score Shakespeare in the Park tickets. This beloved free annual tradition is produced by the Public Theater at the open-air Delacorte Theater. Sure, you could stay at home and stream Shakespeare movies, but the live outdoor theater experience is unique—and certainly one of the best free things to do in NYC. This year’s Shakespeare in the Park production is Jocelyn Bioh's Merry Wives, an intermission-free adaptation of Shakespeare's The Merry Wives of Windsor directed by Saheem Ali.

As has been the case since Shakespeare in the Park began in 1962, the Public distributes free tickets, but it takes some dedication to secure those seats. This year, the system is in a continual state of flux that reflects ongoing shifts in technology and COVID policy.

RECOMMENDED: Complete guide to Shakespeare in the Park

1. Via digital lottery a week in advance

In recent years, you could get tickets to Shakespeare in the Park in several different ways: by lining up in Central Park, by entering live or digital lotteries, or through vouchers distributed in the outer boroughs. This year, to accomodate COVID-19 safety protocols, the entire system has largely shifted to advance lotteries hosted by Goldstar. Here is the lottery's website; you can also access the lottery through the Goldstar app on their Apple and Android devices.

Here is how it works:

Starting on Tuesday, June 29, ticket lotteries will be held every Tuesday and Friday for performances the following week. Mondays through Wednesdays are covered in the Tuesday Draw, Thursdays through Saturdays in the Friday one. (For example, on Friday, July 2, you'll be able to enter the lottery for the performances on July 8 through July 10.) Consult the full Entry Calendar for exact dates.

You can enter at any time from 12am through 12pm ET on the day of each lottery draw, and you can request up to two free tickets. You'll be asked to indicate which date or dates you'd like the tickets for, and which seating section is right for you: Full Capacity if you've been vaccinated, Physically Distanced if you haven't.

When the window for entry closes at noon, you'll need to be ready to take action. If you win, Goldstar will email you a confirmation and a push notification, after which you will have only 60 minutes to claim your tickets. If you do not do so within an hour, your tickets will not be saved for you. You can only win or receive tickets to the production once.

2. Through the text-to-standby line on the day of the show

In past years, there has been a standby line at the Delacorte each night for tickets that go unclaimed. Because of shifts in safety policy, the Public has partly moved a virtual standby line this year.

Starting at noon on the day of the show—the earlier the better—send a text to 914-409-9815. That text should say "Join Standby" followed by the date of that night's performance. (E.g., Join Standby August 10). You can request up to two tickets, and you can make a request any day on which there's a performance. Reply quickly to any prompts you may receive after sending your text to fill out your request form, including setting up a Public Theater ID.

At some point later in the day, you'll get an email telling you whether or not your request has been successful. If it has, your tickets will be waiting for you at the Delacorte box office, where you must pick them up in person (with government ID) between 4pm and 7:30pm. If you don't pick up your tickets in time, they get released to the in-person standby line.

3. By waiting on the in-person standby line on the night of the show

There is a standby line at the Delacorte each night for tickets reserved through the lottery or the text-to-standby line that have gone unclaimed. If you're lucky, you may be able to scoop up seats half an hour before the show, though you'll want to get there a while before then to secure a decent position in line.

Before you go, you'll need to register for a Public Theater ID. Tickets are limited to two per person, and the number of available tickets varies from day to day. There’s no cutting, saving spots or leaving the line for any extended length of time.

If you're planning to wait for a while, bring a chair or a blanket, as well as an umbrella in case it rains. (Shows are very rarely rained out, but there will probably be a smaller turnout if it's drizzling, which will increase your chances of snagging a ticket.) Lines tend to be shorter toward the beginning of a given show's run, before the reviews have come out and word of mouth has spread.

4. By donating money to the Public

Okay, this one isn't free. But if you have the money and don't want to leave anything to chance, you can guarantee yourself a ticket by making a tax-deductible donation to the Public Theater. A donation of $300 will earn you a single reserved ticket to Shakespeare in the Park, and $500 will get you a pair. (Each donation will also give you the right to secure two additional seats for $300 a pop.) 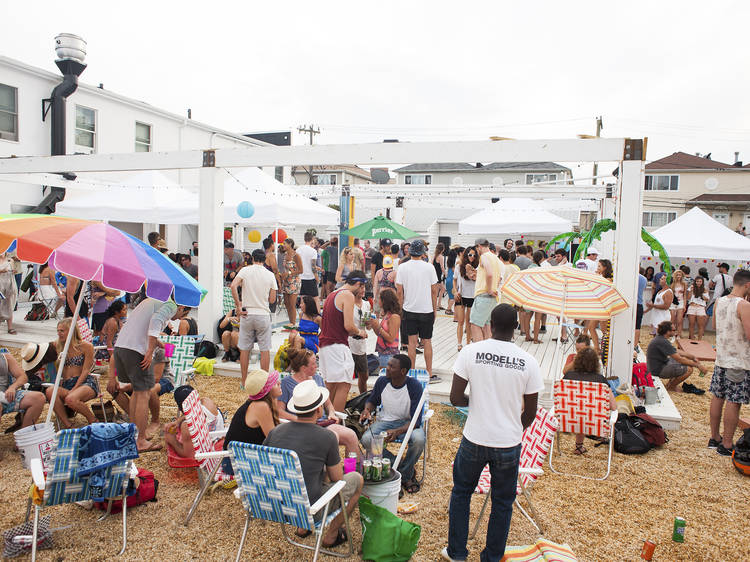 Things to do outside in New York

There are so many great reasons to get outdoors this season—poolside cocktails, a cool night flea market, tacos on the boardwalk and much more