It’s been more than a decade since Sonya Tayeh’s athletic, hard-hitting choreography on So You Think You Can Dance catapulted her to national prominence. The brief pieces she created for that show earned her two Emmy nominations—but also hinted that she had far more to offer. Since then, she’s fulfilled that promise in an impressive array of projects, and this summer she made her Broadway choreographic debut with the extravagant Moulin Rouge! The Musical. Next up: working with director Rebecca Taichman (Indecent) on the Off Broadway musical Sing Street, adapted by Enda Walsh from John Carney’s 2016 film about teenagers who start a rock band in 1980s Dublin. We caught up with Tayeh to talk about what she’s been up to and what lies ahead.

Moulin Rouge! was the first musical you’ve worked on that’s gone to Broadway. What has been your takeaway from that experience?
Courage. Moulin Rouge! is my baby. My innate way is excess—that’s where my body goes when I want to make dances—and that show thrives in excess. But it took a lot of courage to hold onto my sensibility with the movie as such a strong reference point. Over time, I was able to move past the pressure. Holding onto that, and seeing it realized—when I left I really felt like I could do anything. The opening number is 13 minutes long! 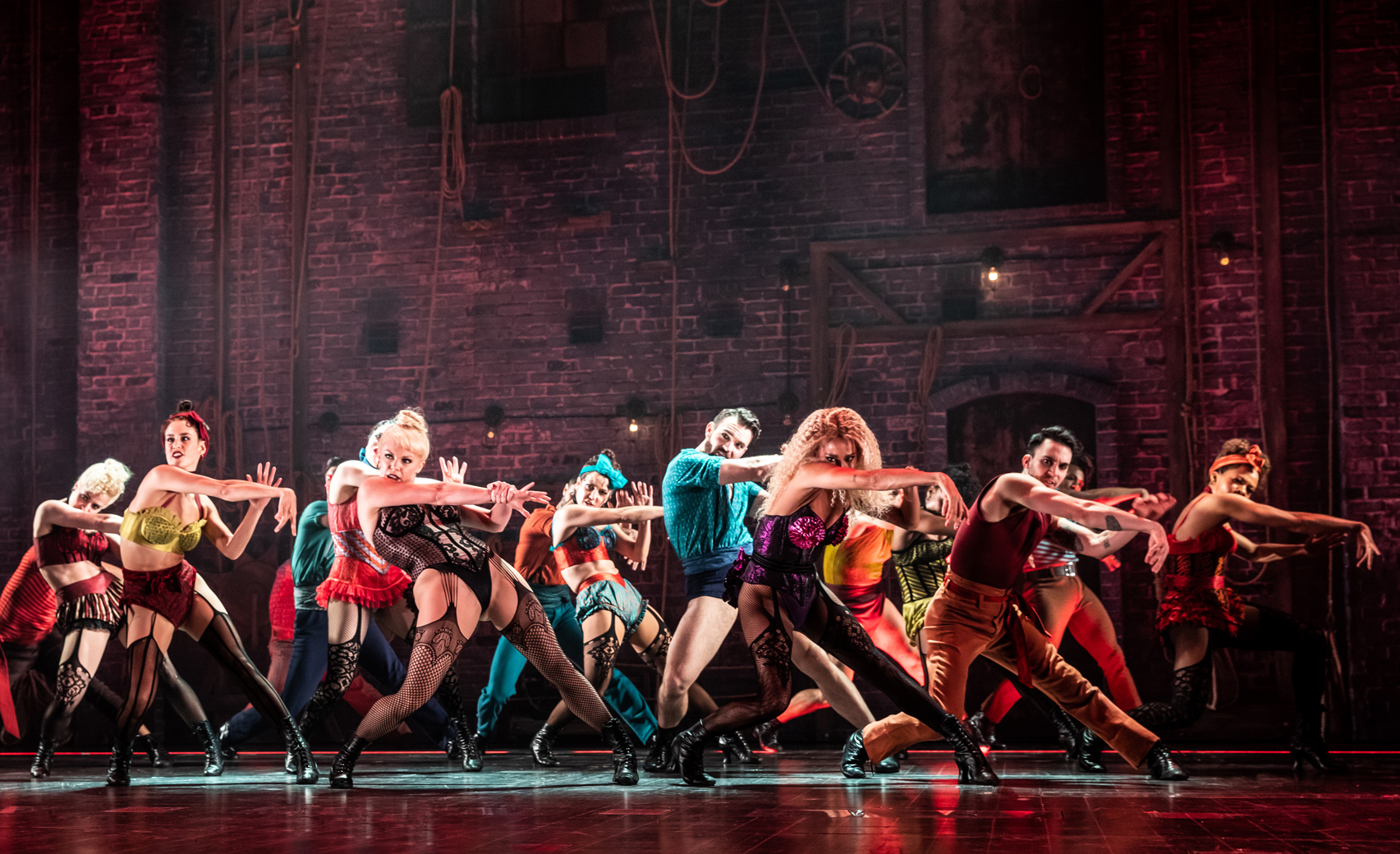 So much happens in that number. Where do you even start with something like that?
I was gifted with so much preproduction. When I got the job, I told [director Alex Timbers], There’s no way I can walk in and provide you with all of this in five weeks. It’s not possible. There are 30 iterations of “Roxanne” in the preproduction archive—I counted them!—and at least 10 to 12 iterations of the opening. I always work really hard, but for this I really, really lived in the studio. I don’t know how else you could’ve done it, because of the movie. The swift cuts, the energy, momentum and adrenaline you feel when you watch the movie—those were my driving inspirations. How can I make the feeling of all that shifting in the movie happen on a live stage?

It’s great seeing so much serious dancing, and at such a high caliber, on Broadway.
I’m so proud of the excellence of the ensemble. I wish someone had that audition on film. Because my reference points are Twyla Tharp, Martha Graham, in terms of not just the work, but the discipline, drive, inventiveness, ambition—those are my pushers. It wasn’t a Broadway dream. I just want to do inspiring things, and do art with people I’m inspired by. You have all these incredible dancers who are hungry to show off all of that training, all of the excellence that they carry. That’s what I wanted to see. They’re not placeholders. They are dancing. This ensemble can carry the story. You can feel emotional content and intention, by dancing.

I completely believed that each of them had their own stories happening in the background.
I wish I could give you all the backstories! Creating the world, we talked so much about holding onto their characters inside the unison moments, so you get a glimpse of who they are. It’s not polished. It has a grit and a roughness to it. That’s what’s so beautiful: You see a world of people who have their own lives inside the movement.

Like the moment at the end of “Backstage Romance” when they drop the final pose and collapse back into being exhausted performers in a rehearsal.
That’s a genuine release, too, because they’re dying. [She laughs.] They’re like, I’m so happy you guys are applauding for so long, but trying to hold this pose is killing me! That opening of Act Two is my pride and joy. I really love it. You feel the performers’ pride, too, and there’s nothing more satisfying as a choreographer.

The way the different groups overlapped and occupied space was so smart. It was big and over the top, but in a way that felt necessary.
The root of what we’re talking about here is what the piece needs and wants. Moulin Rouge! needs and wants excess. When there was any space in between, it was like the stage was screaming. Sing Street needs and wants simplicity; it wants you to pull back, to show the heart of it. To come from such an excessive show to a more simplified, human-experience type of show—I was really excited to show that I can do that.

How did you get involved with Sing Street?
I was in L.A. working on Rent Live, and I got an email from my agent that Rebecca Taichman was interested in having me choreograph Sing Street. I’d been wanting to work with her for so long. She’s a genius—such a poetic, emotionally invested director. We chatted on the phone and had this amazing connection, and then we had to work through the puzzle of scheduling. We had a three-and-a-half week lab in the summertime, and now we’re here in rehearsals.

What has your collaboration been like?
We both work in excess: throwing so many ideas out, not having any clue if any will work. And then from there you have conversations: What affected you, what did you feel, what is the most unusual approach or choice that can take us to another place? This piece wants—needs—simplicity. That was jarring at first, to have all this stuff inside it and squint and say, No, no, too much. I’m not one to map it out strategically. I have to feel it all.

What was your entry point into the show?
I love the movie. I watched it a few months before I got the call. But I read the script—this incredible, beautiful pop-up storybook about these kids who come from really terrible homes and who are finding their way and want to dream big—and I was weeping. That’s what was intriguing for me: to find that for them.

Were you inspired by the early-’80s music videos that come up in the film?
Duran Duran, the Cure, all those videos that had so much inside them but didn’t fully have a through line. How they moved their bodies when they were playing—that was a big one. We had a video party, we’ve had dance parties, we had tons of conversations with the cast, and just tried to build the vocabulary from there, referencing that time while also digging into who they are in the story. Because in the show, these kids come from dysfunctional, reckless families. Too much structure, too much formality in terms of the choreography—that doesn’t work. How do you choreograph a band that has never played together?

There are some marked similarities between this project and Once, which was also adapted by Enda Walsh from a John Carney film, and which had such a beautiful way of moving the musicians without it feeling choreographed. Was that a reference point?
Totally. All the instruments are mobile, and you want to create the world that way. The stage is really bare. How can you find creative ways to shift the scene musically? I use the instruments as people too. It’s like a duet: When you’re walking, how can you put the guitar on your back in a beautiful way, or tuck under it like you’re hiding? You’re seeing the kids moving through the world, trying to find a different path. All those questions are based on focusing on the music, too—like in Once!

Your choreography is known for its physical intensity and rigor. What is your approach when you’re working with people who might not consider themselves dancers?
My training is very limited. I didn’t start dancing until my teenage years. So the way I describe movement is very much not dance vocabulary, and I’m able to articulate it regardless of your dance experience. It should feel like your knees are buckling, like your shoulders are lifting so high they touch your ears. What does it feel like when you’re singing a love song and you’re holding a guitar, or giving that person you love a hug? Those types of real questions. I didn’t even ask how much dance experience there is in the cast. They’re all inside their bodies in the most beautiful way.

One of the key lines in the film is, “Rock & roll is a risk.” What risks are you taking with this production?
Doing it. When you have a film that is so loved, everyone walks in with all their favorite parts. The things I would hear about Moulin Rouge! while sitting in the audience… [She laughs.] But that’s what’s so beautiful about it: You have a beautiful reference point to topple over, not just carry from the screen to the stage. You turn it upside down. Luckily, the world has given me jobs with risk-takers who want to dig deeper, and who thrive on innovation.

You’ve seemingly tackled every type of choreographic project there is. What’s left on your to-do list?
Movies! I want to do a film so badly. I’m a big horror-movie buff. I would love to get inside of that world. So You Think You Can Dance was fast. I’m not after that type of swiftness, but I miss being behind the camera.

Across these different types of projects—musical theater, television, concert dance work—what stays constant for you?
My reference point is always discipline and preparation. That doesn’t mean I walk in with all the right answers, but my channels are open and I’m trying and trying. That doesn’t ever stop, and it’s sometimes too much sizzle in my mind.

Do you find that one type of process comes more easily?
For theater, the mood takes a minute. You’re in a space creating and you have to look back at the creative team behind you and ask, “What do you think?” You can’t just hold onto an idea and have it realized, because it’s not just yours—it’s a collaborative process. I really love sharing, so I don’t sweat it, but it takes a minute. When I’m doing my concert work, it’s all me. It can be a bit more selfish in terms of where the content comes from. Sometimes it can feel super lonely. But I enjoy both, I really do. I take them as big challenges, and I love being challenged. It makes me feel alive, you know?