This year, Hanukkah 2012 doesn’t overlap with that other well-known December holiday, Christmas: It takes place from sundown on December 8 until sundown on December 16, giving you eight days full of music, latkes, dreidels, booze, burlesque and some stale gelt (chocolate coins) left over from last year. Here’s where to celebrate.

RECOMMENDED: Guide to Hanukkah in NYC 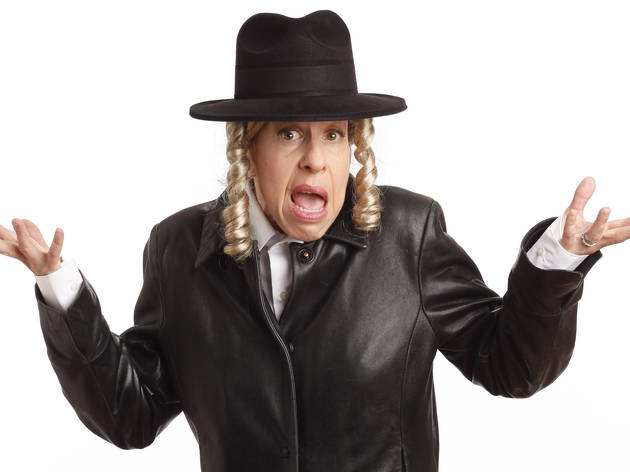 Comedian and Broadway vet Jackie Hoffman—most recently she played Grandmama in The Addams Family—reprises her one-woman semiautobiographical take on Dickens’s classic Christmas novel. Hoffman plays every role in the hit show, delivering kvetchy comedic monologues and riffing on Jewish identity. TONY Theater associate editor Adam Feldman describes it as “one of the funniest things I’ve ever seen in a theater.” Take your parents when they insist on visiting, and finally solve the mystery of exactly how many things rhyme with oy vey. jackiehoffman.com. $39.50–$59.50. 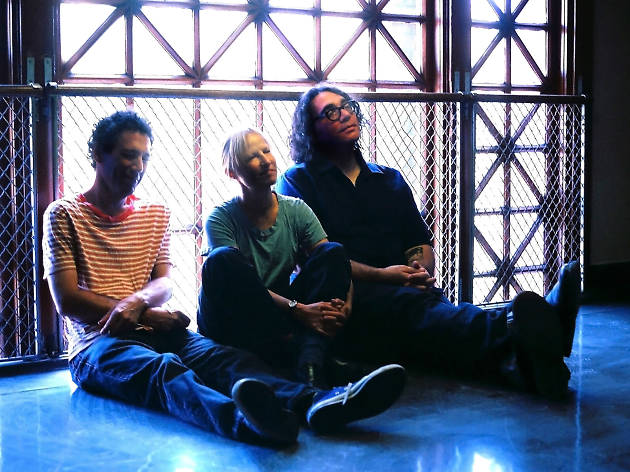 Every year, the indie-rock trio returns to Hoboken to tear it up with surprise guest performers in tow. Though the lineup changes annually, the shows usually feature a mix of YLT’s own songs, covers, traditional Hanukkah tunes and comedy sets (H. Jon Benjamin and Jon Glaser made appearances last year). Tickets for all eight crazy nights have already sold out, so either hit up StubHub or mark your iCal for next year’s dates. Sold out.

At the Jewish Museum's celebration, little revelers can decorate dreidels, craft Hanukkah lamps and use the stories of Ezra Jack Keats for scene-inspired artwork. Don't miss a performance from Ben Rudnick and Friends or the museum's iconic collection of Hanukkah lamps. Ages 3 and up.

Meet at the LESJC Kling & Niman Family Visitor Center, 400 Grand St at Suffolk St Prep for Hanukkah by joining the Lower East Side Jewish Conservancy on a two-and-a-half-hour walk. The tour visits the ’hood’s historic synagogues and ends with gratis coffee and sufganiyot (traditional jelly doughnuts). Go to nycjewishtours.org for more information. 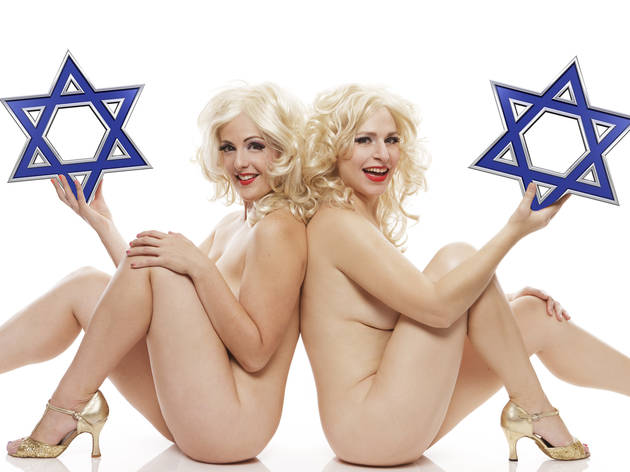 Want to spend the holiday with some hot Jewish girls—most of whom aren’t wearing clothes? Hosted by Sherry Vine and judged by burlesque stalwarts the Schlep Sisters (Minnie Tonka and Darlinda Just Darlinda), this event welcomes everyone from honorary Jews to “bacon-loving heebs,” so expect a crowd that’s almost as rowdy and diverse as the performers. The pageant-style event features Little Brooklyn, the Evil Hate Monkey and others battling it out for the title of brightest candle on the menorah. $20–$35 plus $10 minimum. Purchase half-price tickets through December 6, 2012 at ny-offers.timeout.com/deals/hanukkah-burlesque.

Families can celebrate the Festival of Lights by taking a spin around the ice rink in Central Park and watching as a giant ice menorah is lit for the first night of Hanukkah. A light dinner, donuts and hot beverages are included in the evening's festivities. All ages. 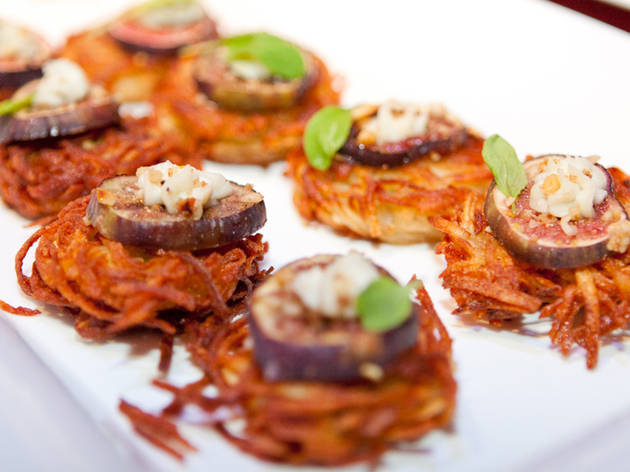 The beloved fried potato pancake takes center stage at this Jewish comfort-food jamboree. Chefs from 16 local restaurants—including A Voce, Balaboosta and Veselka—descend on BAM to vie for the ultimate latke award, judged by a panel that includes Brooklyn Flea cofounder Eric Demby and Saveur senior editor (and former TONY Food & Drink editor) Gabriella Gershenson. In addition to latkes, nosh on mini bialys from Hot Bread Kitchen and sufganiyot (jelly doughnuts) from Dough. Plus, an open bar serves beer from Shmaltz Brewing Company, vodka and wine, as well as Brooklyn Roasting Company coffee and fermented drinks from Kombucha Brooklyn. Profits will be donated to the Sylvia Center for childhood nutrition. 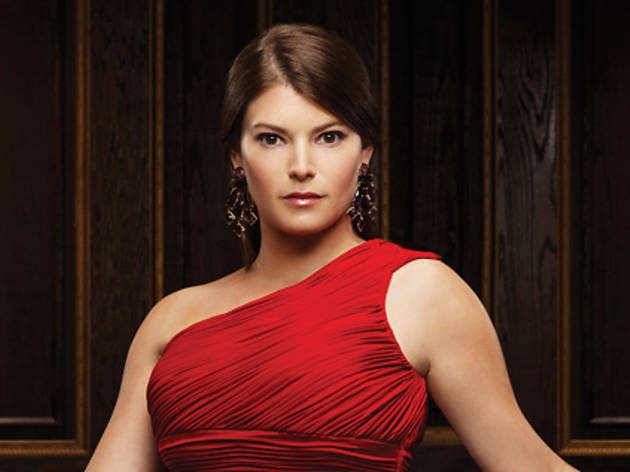 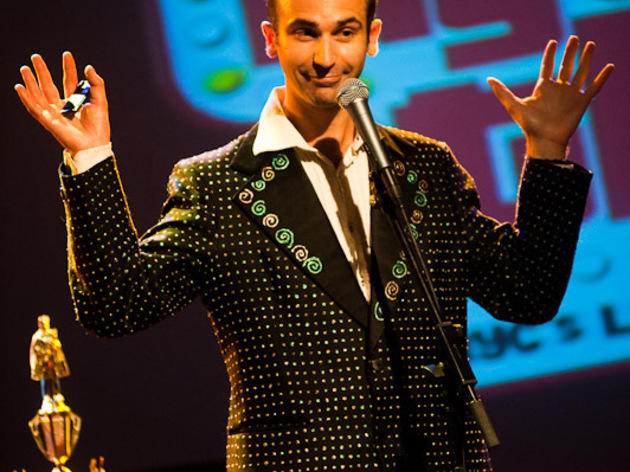 Noah Tarnow serves as host and MC at the holiday edition of his long-running multimedia quiz show, where your impressive stash of trivial knowledge (or ability to come up with smart-alecky witticisms) just might snag you a $200 grand prize. EDP serves as the between-round DJ. 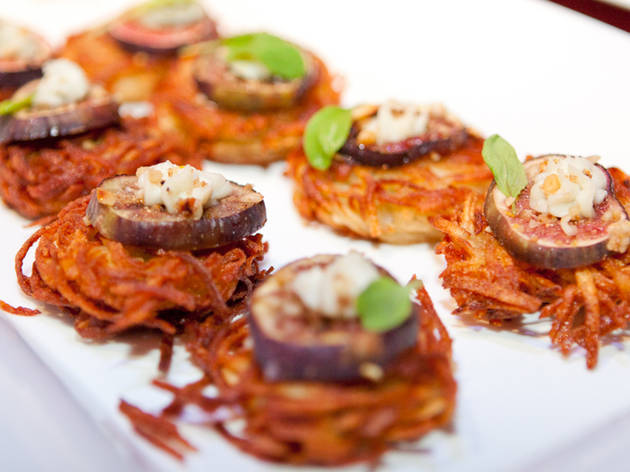 Potato pancakes with sour cream and applesauce are for amateurs. Instead, try chickpea latkes with peanut butter and frankincense, or yucca with sour cherry and anise. Freelance craft brewer Dan Moss, formerly of Brooklyn Brewery, and 92YTribeca head chef Russell Moss (nope, they’re not related) will team up to pair carbs for the fifth year. Tickets include at least five beer-and-food pairings; there’s also some traditional candle-lighting and dreidel-spinning, plus the Y’s rabbi-in-residence Dan Ain will lead a round of Hanukkah trivia. $25, advance $22.