“Meeting people in NYC is especially hard,” says UCB comedian Carly Ann Filbin. “Everyone has their guard up 100 percent of the time. I usually assume that if someone makes eye contact with me, they are going to hit on me, ask for directions or guilt me into donating to something.” Tell me about it. How do you get to know new people here? And how—heaven forbid—is anyone supposed to meet men around these parts?

After spending my first two years in New York in anxiety-induced social isolation, I decided something had to change. So I attended Never Sleep Alone, a hilarious interactive show at Joe’s Pub, in which host Dr. Alex Schiller (played by comedian and gal-about-town Roslyn Hart), basically, tries to get audience members laid. One of the good doctor’s key approaches for meeting new and attractive people? Ditch your friends. “If your friends are around, you will be very self-conscious experimenting with different personas and sociosexual roles,” she writes in Never Sleep Alone, the book. “Go out and meet new people, and invite them to your dinner party.”

A dinner party. Interesting. Sitting down with Hart a few days after her show, I toyed with the idea of hosting my own gathering. But I’d never go through with it: My apartment is too small, my roommates are completely useless, and I have no game. So she challenged me: I had 10 days to meet 10 men and invite them to one. She’d host it at her dope Upper West Side pad (passed down to her from the late great musician Dave Moon) and even balance it with a few interesting people from her network. The moment I accepted, I could feel a surge of anxiety pumping through my veins. But I did pull it off.

I decided that I’d only approach strangers who seemed interesting, regardless if they fit my absurd standards of attractiveness, whether they were gay or straight, whether they’d say yes or no.

Recruiting began immediately. At House of Yes later that night, I gave my card to a few guys. There was Dexter, a blond with powerful eyebrows, and Fixx, a bearded man of mystery in a leather fringe jacket. Approaching them on a mission of friendship, I didn’t have to use pickup lines and feel creepy about it. The next day, the subway became my watering hole, and I invited a few dudes between stops. I spotted Terrell on the Q train. I noticed Luca because of his fur coat. It seems single people in New York are just waiting to be discovered on public transit.

After receiving a few confirmations, it dawned on me that this thing was actually happening. And to deliver on the night of mystery I’d promised, we’d have to go big. Hart enlisted her friend and artist Ventiko to bring her emotional-support animal—a real, live peacock—as an honored guest.

The big day rolled around, and soon the sun was down. There were knocks at the door, and I greeted everyone with champagne. Though the conversations started in fits, the group began to take care of itself as more strangers arrived. Terrell, the prince of style, instantly won over the crowd. Binh, a striking catch I blindly invited via the app Scruff, was knocking everyone out with a strong malt liquor he brought. Hart recruited guests to help her make a bruschetta, while the rest of us talked about astrology, transcendental meditation and Get Out. Between servings, we made everyone get up and sit with someone else. I was seated next to Cyler—a makeup artist by day and a go-go dancer by night—who told me he had recently moved from Austin. “People value their time here more,” he said. “It takes effort to stay connected.”

Midnight loomed, and limoncello was poured. The evening had gone well enough for me to get a little too confident, so I asked Binh about his relationship status. “You’re getting ahead of yourself,” he said. (So my game still needs work, apparently.) As the last remaining guests got cozy in the living room—this was apparently such a good soiree that peeps decided to sleep over—I called it a night and was tucked into bed by two of my new friends. It felt like summer camp. (And just as at summer camp, I learned the next morning that people were hooking up while I was out like a light.)

So okay, maybe I didn’t get laid that night. But I did make at least one friend, someone who’d been a stranger just minutes before. And since that night, New York has felt a lot smaller. I’ve struck up conversations with men at restaurants and on planes, buses and trains without that same fear of rejection. And for this New Yorker, that may be an even bigger score.

Looking to meet your own strangers? 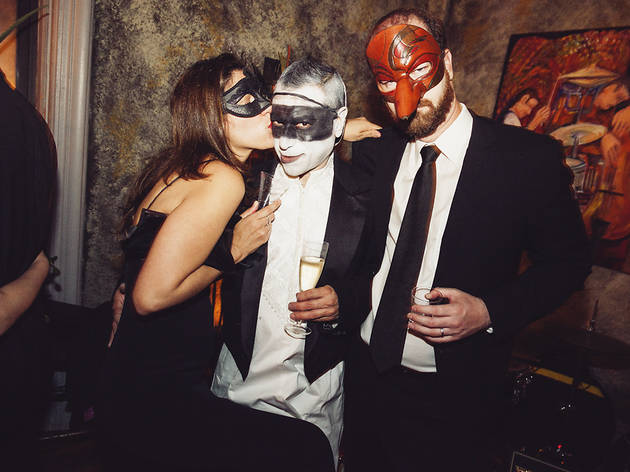 Never Sleep Alone’s Dr. Alex Schiller (Roslyn Hart) and performer Alfredo Guenzani invite you to join 100 mysterious strangers for an unpredictable tour through some of downtown’s most decadent bars, restaurants and party spots. Show up in a mask and a getup worthy of The Phantom of the Opera to win the costume contest.