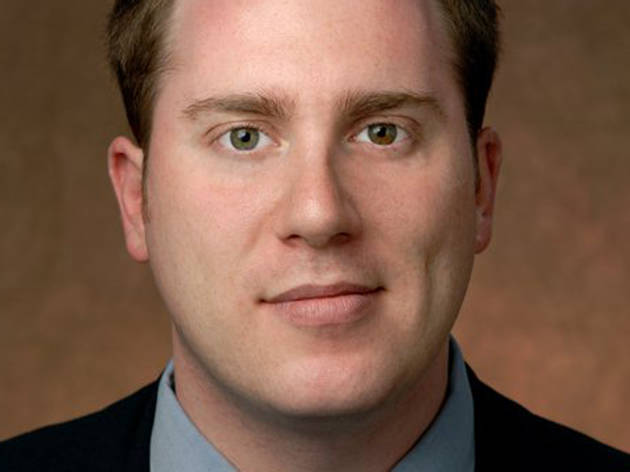 (buzzfeed.com)
“I grew up here, and aside from a few years reporting from foreign lands—Indianapolis, Latvia—after college, I haven’t really left. But I’ve always felt that being from here made me a bit of an anomaly, less of a New Yorker than the people from elsewhere who really drive the city. I didn’t really feel like I was fully part of the city until I started raising my kids in Ditmas Park, Brooklyn, which is a small town where everyone knows your name.” 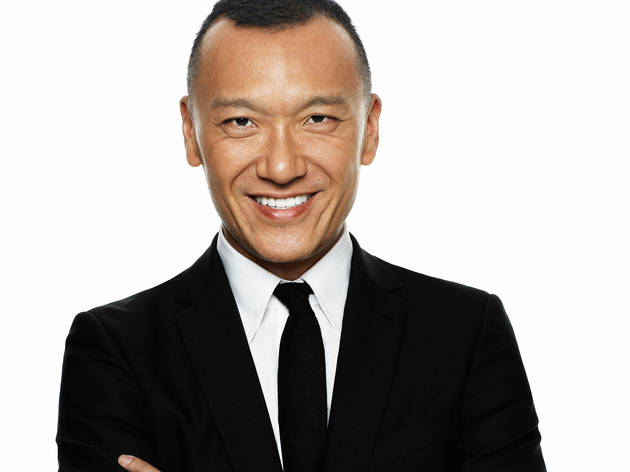 “The cliché of ‘The City That Never Sleeps’ is the best description of a city where you can get anything you want, anytime you want. My first real feeling of being a true New Yorker was when I walked around on New Year’s Day the first year I arrived and realized everything was open.”

“A true New Yorker will always have an early Sunday morning breakfast—whether it’s coming home super late from a party or waking up early to enjoy the quiet of the city—in the greasiest diner-dive possible, with the Sunday papers. I love going to La Bonbonniere(28 Eighth Ave between 12th and Jane Sts; 212-741-9266) in the West Village with my Sunday Times and New York Post on early Sunday mornings. There’s nothing more special than [getting] eggs and bacon from there and leaving smelling like the food.” 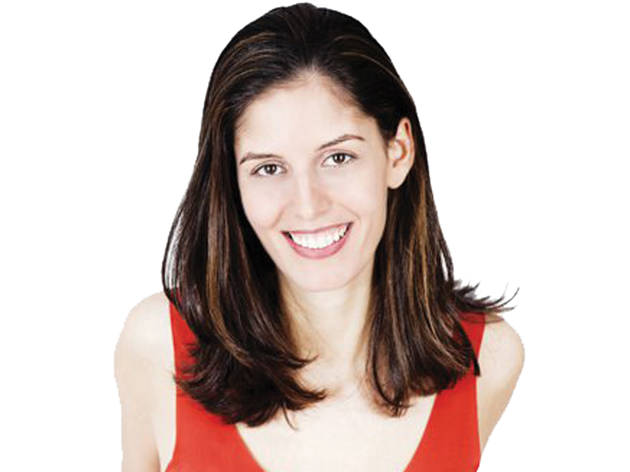 Photograph: Elk Studios
(foodspotting.com)
“A trip to the Apollo Theater (253 W 125th St between Adam Clayton Powell Jr. [Seventh Ave] and Frederick Douglass Blvd [Eighth Ave]; 212-531-5305, apollotheater.org) is a must for any true-blue New Yorker. A friend and I went the night Michael Jackson died, and danced with about a thousand locals to Thriller in its entirety.”

“I also suggest spending a summer afternoon walking from Jackson Heights, Queens to Red Hook, Brooklyn. It’s not so hard and, in fact, my sister runs a walking tour called GoldNight (facebook.com/goldnightwalks), that she leads each summer. You begin by eating authentic samosa chaat in Jackson Heights, shop for saris and end up near Sahadi’s (187 Atlantic Ave between Clinton and Court Sts, Brooklyn Heights, Brooklyn; 718-624-4550, sahadis.com) for quality hummus or at the Red Hook Ball Fields (155 Bay St between Clinton and Henry Sts, Red Hook, Brooklyn; 718-722-3211, nycgovparks.org) if your feet are up for it. Finish the day with a cup of fresh squeezed watermelon juice, watch kids play soccer or jump in the Red Hook pool. New York extends far past Manhattan, and I encourage friends to visit the outer boroughs as much as possible.”

“Honestly, I’ve felt like a New Yorker my whole life. My parents moved to the city in the ’60s, and I grew up listening to stories about Studio 54 and Palladium. According to my father, this city hasn’t been any fun in more than three decades. I spent junior high and school in Minnesota, and I went to college in Washington, D.C. I moved back to New York six years ago.”

“As an adult, I solidified my love for New York with short road trips to Arthur Avenue in the Bronx for quality cannoli; to the Brooklyn Botanic Gardens (900 Washington Ave at Crown St, Crown Heights, Brooklyn; 718-623-7200, bbg.org) during its cherry blossom homage in April; to Central Park for the annual outdoor New York Philharmonic (nyphil.org) performance; to the Met Opera House (Lincoln Center Plaza at 65th St; 212-362-6000, metoperafamily.org) for the opening night of the American Ballet Theatre (abt.org); to the High Line the week it opened; and to the Columbia University Library steps any day, week or month. Those are some of my fondest, true-blue New York memories of recent years.”

“To be a New Yorker, you don’t need to be born and raised in the city; but you do have to feel like there’s no other place on earth you’d rather live.” 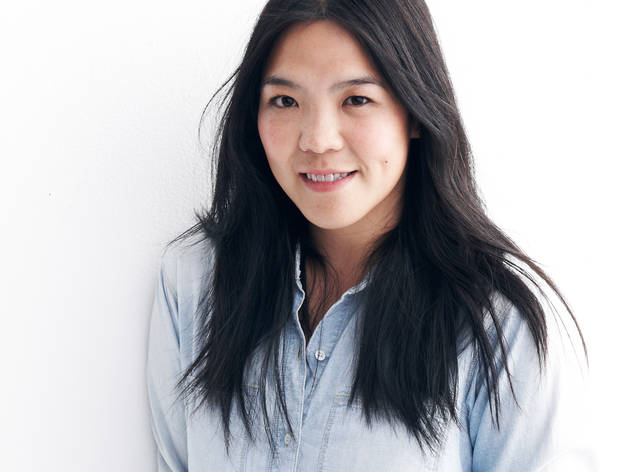 (madewell.com)
“Visit Brooklyn. You can’t call yourself a New Yorker if you have only seen Manhattan and not explored the other boroughs. This neighborhood is especially important to me because I live there with my family. It is where we landed after moving here from Ohio. I love Williamsburg for its industrial vibe. It is full of creative people and has become such a great place to bring up kids. There are amazing restaurants and cool boutiques. You get a bit more space, but it is still a hop away from the city.”

“[You can] get lost while discovering new places in Chinatown, but find your way to Amazing 66 (66 Mott St between Bayard and Canal Sts; 212-334-0099), Winnie’s (104 Bayard St between Baxter and Mulberry Sts; 212-732-2384) and Joe’s Shanghai (9 Pell St between Bowery and Doyers St; 212-233-8888, joeshanghairestaurants.com). Amazing 66 has a really incredible dish that’s a whole chicken stuffed with fried sticky rice. Winnie’s is a local, no-frills, low-tech karaoke spot (they still use laserdiscs). Plus the drinks are cheap, and you only have to pay $1 per song. Joe’s Shanghai has the best soup dumplings!” 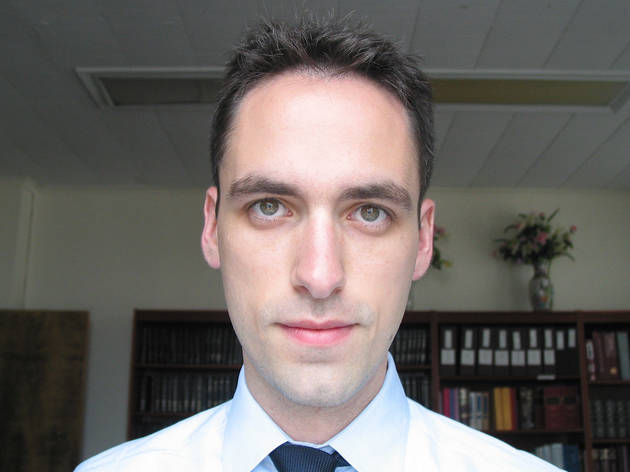 “[The day I felt like a New Yorker was…] probably the day I was born here 35 years ago. Although I think anyone who gets mugged on the subway should get an honorary citizenship. Being a native New Yorker means always having the trump card in any argument about gentrification. Like when all your friends are complaining about how their favorite restaurant became a Starbucks, you can tell them about how before it was a restaurant, it was a bodega that sold ninja stars under the counter—but really it was a front for the neighborhood cocaine dealers. That tends to shut them up real fast. Of course, that’s why most native New Yorkers have very few friends.” 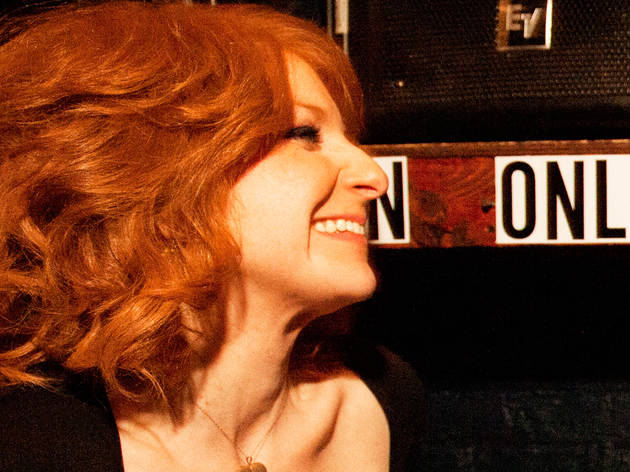 “It’s sort of impossible to be bored when you [walk around New York City], since neighborhoods change all the time—restaurants close, people wear crazy shit, there’s always something to see, even when the weather is lousy. Not every city has that built into its design.”

“See a movie in the middle of the day by yourself, because you can. I remember when Pecker came out [in 1998], and it was the first new John Waters film in a while. TheAngelika Film Center (18 W Houston St at Mercer St; 212-995-2000,angelikafilmcenter.com) was packed on its first night, which was really cool.”

“I’m what Grammy Hall [from Annie Hall] calls a real New York Jew. My mom is from Brooklyn, my dad is from the Bronx, I went to NYU and I’ve lived in the city ever since. I don’t think being a New Yorker is a something as simple as having lived her for X amount of years, figuring out which trains to take without looking at a map, or knowing when to avoid Times Square (which is all the time, unless you have theater tickets and a Klonopin prescription for the purpose of bracing yourself prior). I really do think it’s a disposition you gain with experience. You’re more guarded and cynical, but you’re also intelligent and curious. You’ve seen and heard everything so you really are genuinely ravenous for something new and fascinating—something truly great that breaks through all of the jabber. New Yorkers have friends with different kinds of jobs they’re passionate about, and they have absolutely no time for bullshit, which includes anything boring or time-sucking. When I’m away from New Yorkers or former New Yorkers for too long, I lose my mind.” 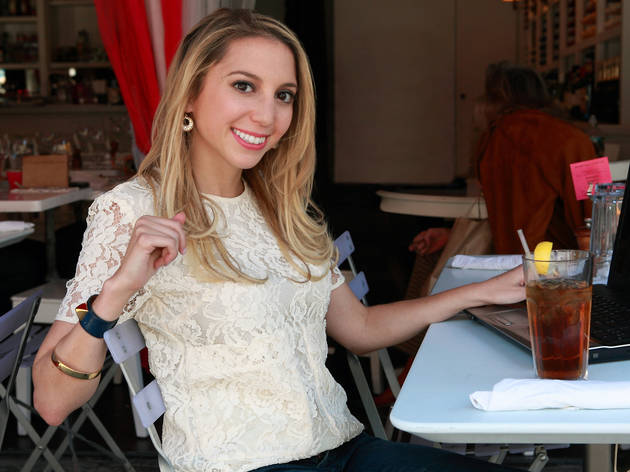 Photograph: Liza Chrust
(wherecanifindtheperfect.com)
“Anyone who lives in New York must go to the High Line (from Washington St at Gansevoort St to Tenth Ave at 30th St; thehighline.org) for a picnic. Head to Chelsea Market (75 Ninth Ave at 16th St; chelseamarket.com) first, which is just a few blocks away. You can pick up everything you need, including baskets at Chelsea Market Baskets, lobster rolls at the Lobster Place, brownie bites at Fat Witch and even some bubbly at the Chelsea Wine Vault.”

“You must eat from a food cart to be a real New Yorker, but there’s no need to settle for the typical hot dogs and pretzels. BLT’s GO Burger truck (goburger.com) offers gourmet kobe dogs for $6, topped with spicy mustard. The truck is always on the move, but you can follow it on Twitter for updated locations (@GOBurger).” 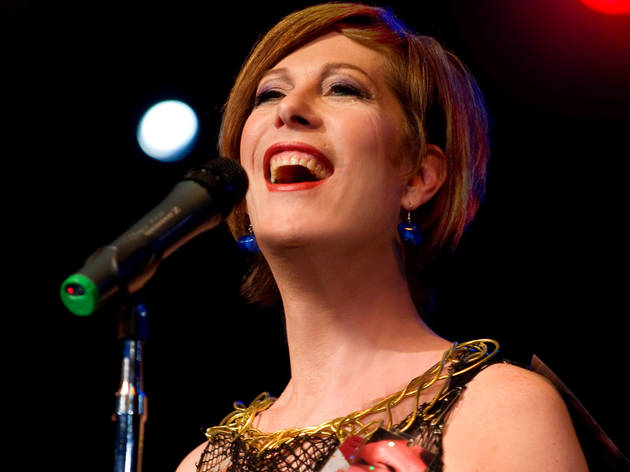 “[I really felt like I was a New Yorker…]  probably back when I was fresh out of school and living on the Upper West Side. Back then, I bought my weed from a guy named Ace who dealt [it] on 87th Street. One day he disappeared. The other guys on the street said he’d been arrested. Then, one day he was back. I realized I’d been around long enough for my dealer to be arrested, spend time in the pokey and get out. I was still there, and he was once again delivering the goods. That’s when I knew I was a real New Yorker.”
Advertising 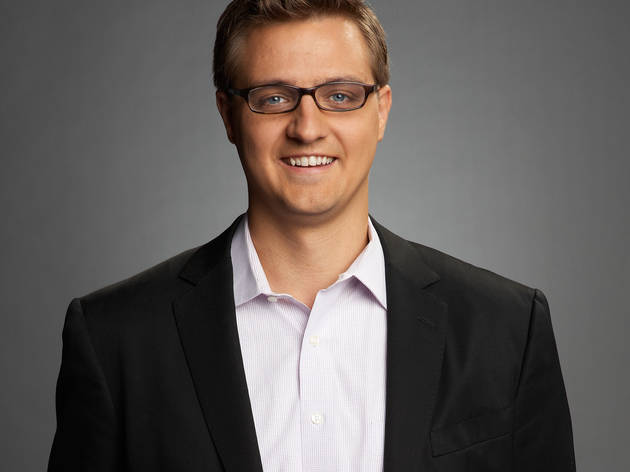 “A true New Yorker takes great, great pride in never being hit with the ‘Please swipe again at this turnstile’ message [in the subway], and can’t but feel just a little bit of bile rising in his or her throat when stuck behind someone who does get such a message.”

“I was born at Albert Einstein [College of Medicine] hospital in the Bronx, grew up in the borough, went to high school in Manhattan and my parents still live in the Bronx, so it’s fair to say I’ve felt like a New Yorker for about as long as I’ve been sentient. That said, I do have early childhood memories of going to watch the Fourth of July Fireworks down at South Street Seaport, sitting on my father’s shoulders and being simply awestruck by the crowds of people: So. Many. Humans. You still get those moments from time to time, no matter how long you’ve lived here.” 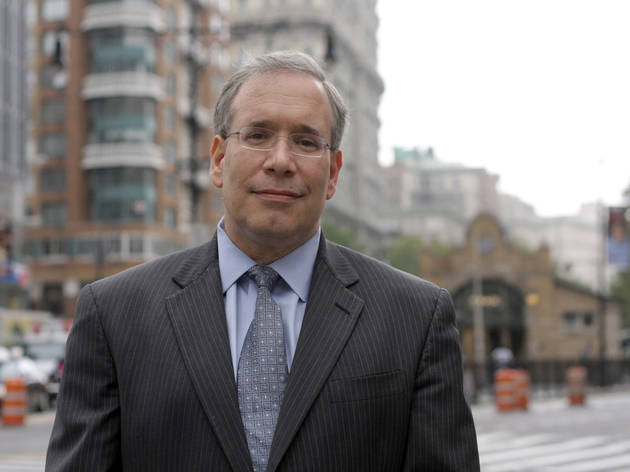 (mbpo.org)
“For me, there wasn’t a specific moment when I realized a New Yorker, because I was born this way; I’m a native. True New Yorkers have a certain moxie that can be recognized from a mile away. You know you’re a real New Yorker when you prefer the sound of honking horns to crickets in the nighttime hours.”