Remember when parts of the CBD was closed last year for a film production called Monty’s Last Stand? Well, that code name was for none other than the critically acclaimed HBO sci-fi drama series Westworld.

For the uninitiated, Westworld is an exclusive, technologically advanced, Wild Wild West-esque theme park. But forget those costumed staff you're familiar with at Universal Studios Singapore (USS) – what you get in the fictional park are android hosts programmed to keep visitors happy, even through unfavourable means. No spoilers ahead, but things hit the fan when one of the oldest working hosts starts a revolution. It has a star-studded cast including Evan Rachel Wood, Thandie Newton, Jeffrey Wright, James Marsden, and Aaron Paul.

With such intricate storylines and characters, it comes as no surprise that Singapore was selected as a shoot location with our unique juxtaposition of modern skyscrapers and heritage buildings, beautifully blending the old and new. Parts of the third season were filmed at popular shopping belt Orchard Road, futuristic buildings like Lasalle School of the Arts, and iconic architectural gems such as the Helix Bridge and Marina One. The filming process was assisted by both the Infocomm Media Development Authority (IMDA) and Singapore Tourism Board (STB).

The latest eight-episode season of the Emmy-winning series first premiered on March 22. Episodes are broadcasted at the same time as the U.S. every Monday at the same time at 9am (SGT) exclusively on HBO Go and HBO, with a second telecast at 9pm on HBO. Spot as many locations as you can when you catch it on your favourite small screen. 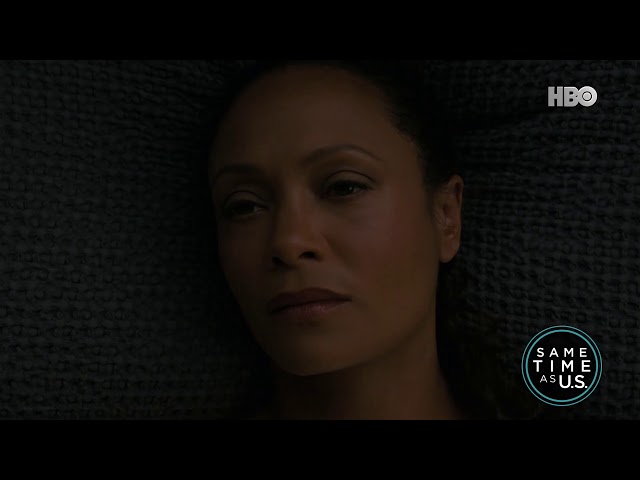 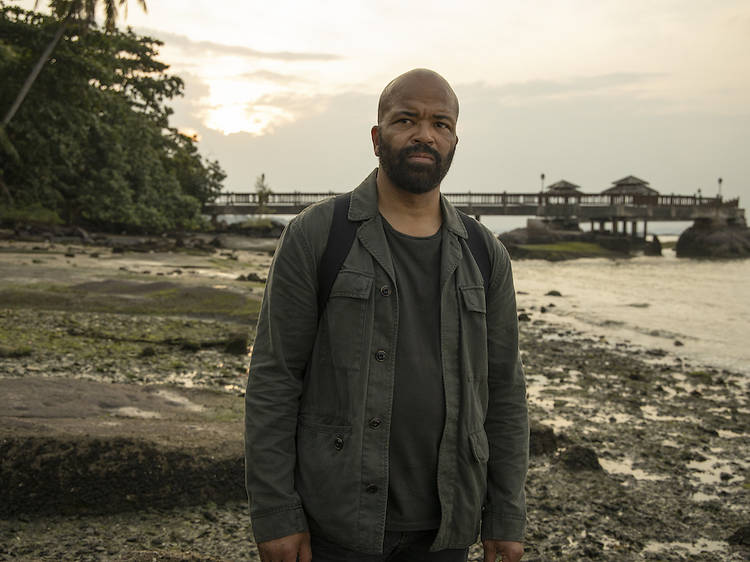 You don't need to take a long take for this one – that jetty behind Jeffrey Wright's character looks oh-so-familiar. If you guess Pulau Ubin, you're absolutely wright (see what we did there). More old school than new school, the offshore island features one of Singapore's last surviving kampongs. At a sprawling 1,020-hectares, it boasts greenery and abundant wildlife, drawing nature lovers and outdoor enthusiasts to explore the many wonders of the granite island. The episode is peppered with scenes from Pulau Ubin, so keep your eyes peeled.

Lasalle College of the Arts

If you catch Aaron Paul's character maneuvering around a contorted building with full-length windows in earlier episodes, you'll know he's been in Lasalle College of the Arts. A work of art in itself, the institution is designed in a way that greets visitors with a black monolithic exterior of stone and aluminium that looks contorted. This illusion then disappears as visitors enter the building to find more seven-storey-high buildings that are connected by an atrium and sky bridges, which capture an overall natural landscape. 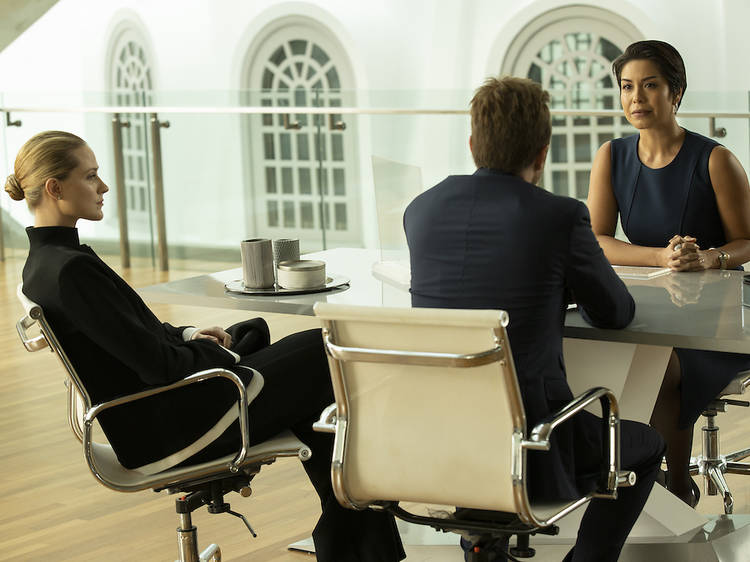 Spotted in episode four, the Rotunda dome (one of the two domes of the Supreme Court) can be seen in the background behind a meeting between Evan Rachel Wood and Aaron Paul's characters. The small dome can be found in the National Gallery Singapore which is a combination of the former City Hall and Supreme Court buildings. The gallery cleverly blends contemporary architecture to the old buildings, balancing heritage and modernity. It is the largest visual art gallery in Singapore and is mostly dedicated to local and South-East Asian art from the 19th century to today. 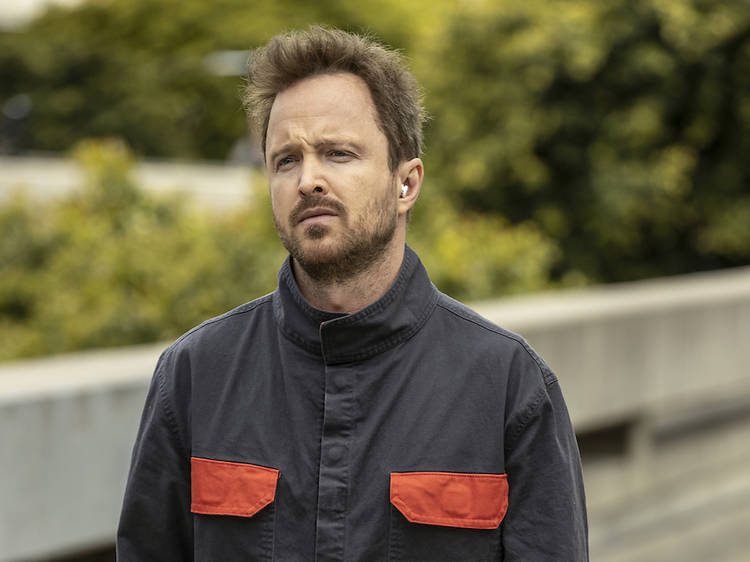 Remember when a blurry shot of Aaron Paul (in this costume, specifically) walking around Tanjong Pagar went viral? We reckon the shoot took place within the area, including the Oasia Hotel Downtown Singapore. This 27-storey towering pillar embraced by green vines is utopian dream come true – it has three different swimming pools under one angular roof where guests can soak up the breathtaking views of the city skyline while having a dip in its infinity pool or rooftop pool. 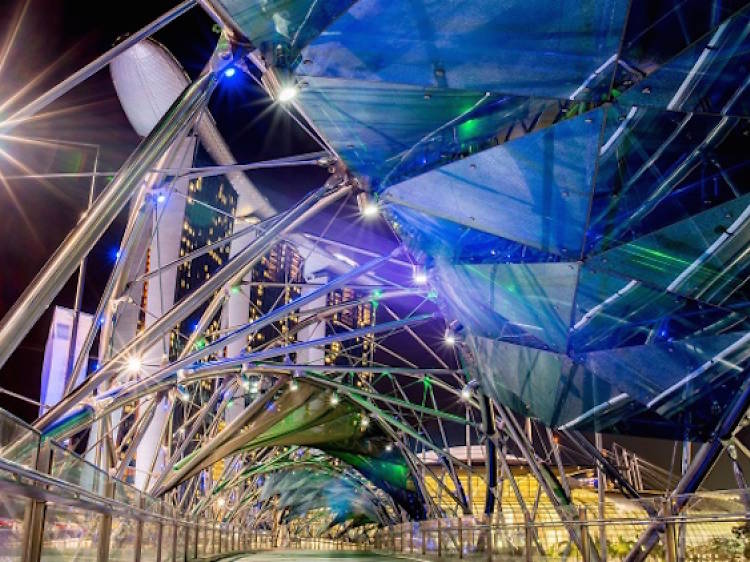 The Helix Bridge aptly looks like something out of a sci-fi film with its futuristic design. Canopies made of fritted-glass and perforated steel mesh are built along sections of the inner spiral to provide shade from the beating sun or heavy rain. The bridge links the Marina Centre with the Marina South, and has four viewing platforms for pedestrians to catch stunning views of the Singapore skyline. Come night time, it lights up as an illuminated double-helix-like structure, creating a visual experience for pedestrians – and the Westworld characters, we're sure. 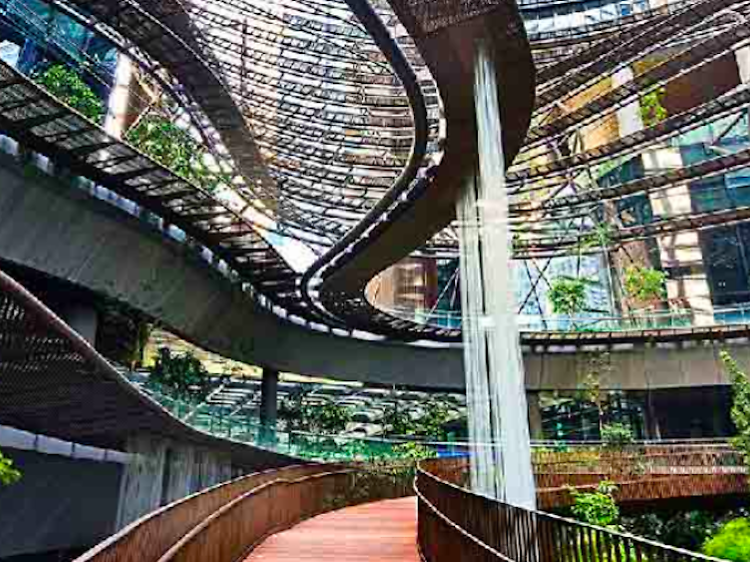 A stunning piece of architecture surrounded by foliage, the award-winning Marina One is an approximately 3.67-million-square-feet space that features two 34-storey residential towers, two 30-storey office towers, and a retail podium called the Heart. Beyond the lush greenery adjacent parks, the Heart also houses a myriad of shopping, lifestyle and gastronomic outlets. 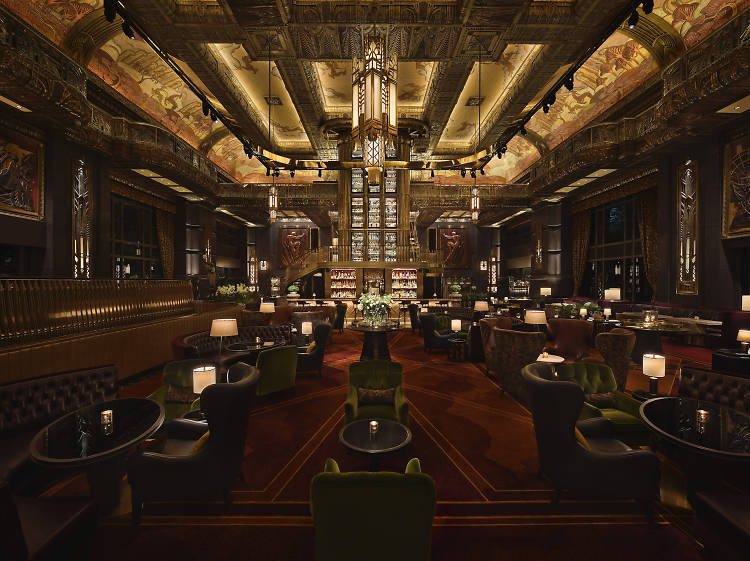 It’s hard not to be impressed when you first step into Atlas. The grand art deco-inspired bar looks exactly like a European hotel lobby of the era. Magnificent champagne-hued tapestries line the ceiling, intricate gold and bronze balconies surround the space, and, of course, a massive gin tower stands imposingly at one end. Said to house over 1,000 bottles of gin, Atlas has the most diverse collection of the spirit in the world. 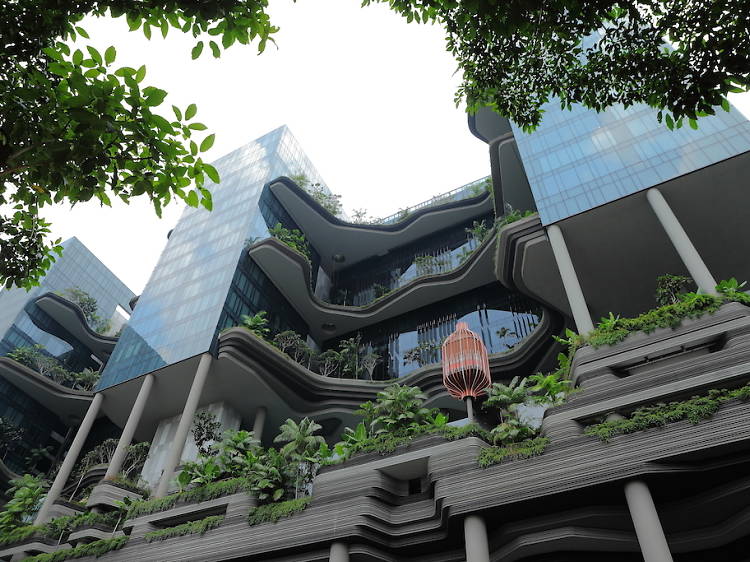 This sanctuary in the CBD makes the perfect balm for your exhausted soul. The hotel is surrounded – inside and out – by lush greenery. Guests can also enjoy a relaxing garden stroll. This is no typical walk in the park, but a 300 metre-long walk above street level on the hotel’s dedicated ‘wellness floor’. Close your eyes and be soothed by the trickle of the surrounding mini-waterfalls, take in the smells of the herb garden, or enjoy views of the CBD – try and spot landmarks such as the Esplanade and Boat Quay in the horizon. And no stay is complete without an #infinitypool shot. Its infinity pool is also featured in the Hollywood blockbuster Hitman Agent 47. 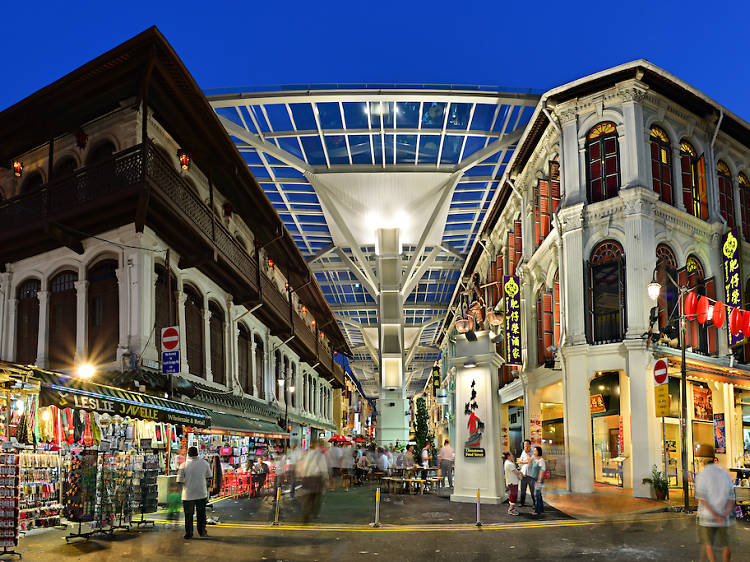 Popular among locals and tourists alike, the pedestrianised Chinatown Food Street features seating for up to 700 diners, an overhead glass shelter for rain protection, and service hours that extends to include all-day dining on the permanently closed-off street. It offers a crop of hawker stalls, even the big guns from local franchises. 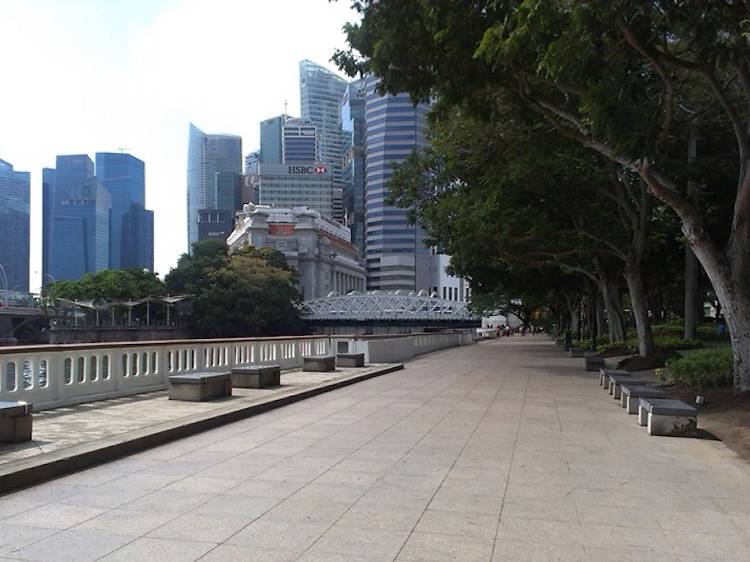 This historic green space is located by the Esplanade – Theatres on the Bay, and is considered one of the oldest parks in Singapore. There are many historical landmarks located within the lush space including Queen Elizabeth Walk, the former Indian National Army Monument site, The Cenotaph, Tan Kim Seng Fountain, and the Lim Bo Seng Memorial. With various memorials and a gorgeous waterfront view, Esplanade Park also makes a great backdrop for photographs – and film, in the case of Westworld. 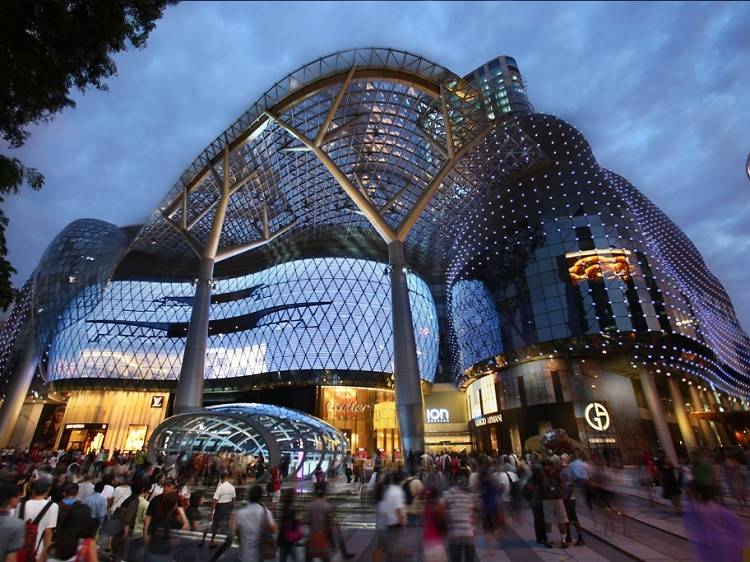 It claims to be the ‘centre of gravity’ in the Singapore retail scene – and with jaw-dropping frontage, cutting-edge design, and more than 300 stores, it makes a good case. Apart from the obvious reason for coming here – shopping – be sure to check out the extra bells and whistles. There’s ION Sky, a double-storey observation deck on the top two floors, an art gallery that boasts 4000-square-foot of art space, as well as shops that house designer brands such as Cartier, Dior, Dolce & Gabbana, Giorgio Armani, Louis Vuitton, and Prada, as well as the dependable staples from Uniqlo and Zara. 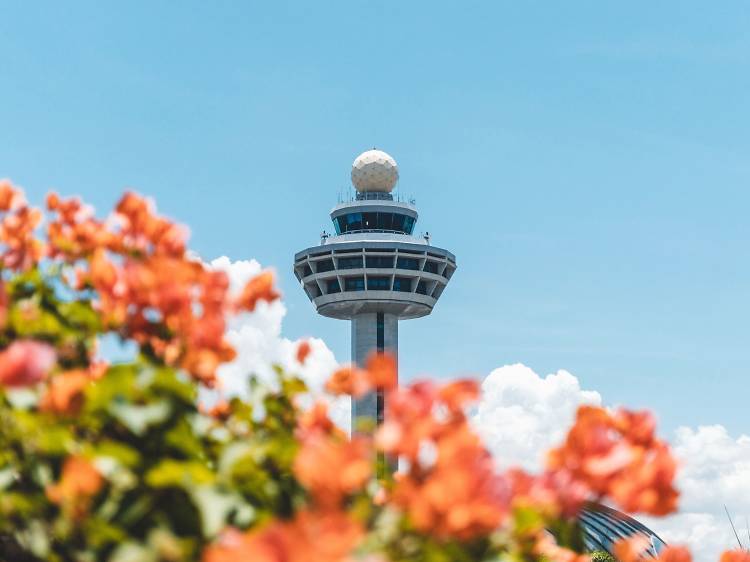 Where to see interesting architecture and landmarks in Singapore 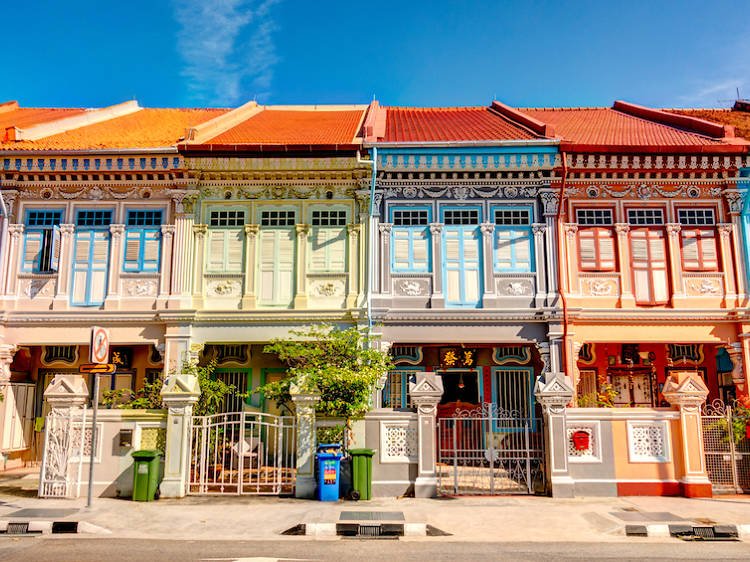 Where to see the most Instagram-worthy shophouses in Singapore 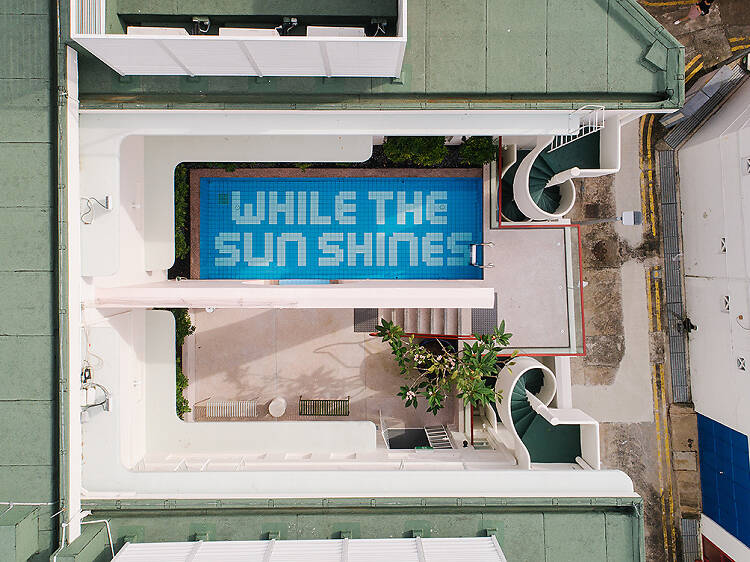 The best boutique and shophouse hotels in Singapore