Eastman, better known as Beastman, is at Time Out HQ, recalling his youth – at high school in Castle Hill, NSW, filling exercise books with drawings that few people ever saw; studying graphic design at Hornsby TAFE; and those early, unsatisfying dalliances with gainful employment. Eastman worked in retail, designing for a real estate company and building “crappy” websites; all the while skating, skating, skating. “I never thought, I’m going to  be an artist. I never thought, I’m going  to make money selling paintings.”

But, along with contemporaries Numskull, Roach and Phibs, he was making paintings, and these days they sell very well, thank you very much. Indeed, Beastman is one  of the most recognised street artists in Australia, constantly in demand to create murals, ‘lowbrow’ art prints (buy them at easteditions.com) and more recently, rugs and clothing. “I definitely say no to more opportunities that come to my inbox than  I say yes to,” he says. 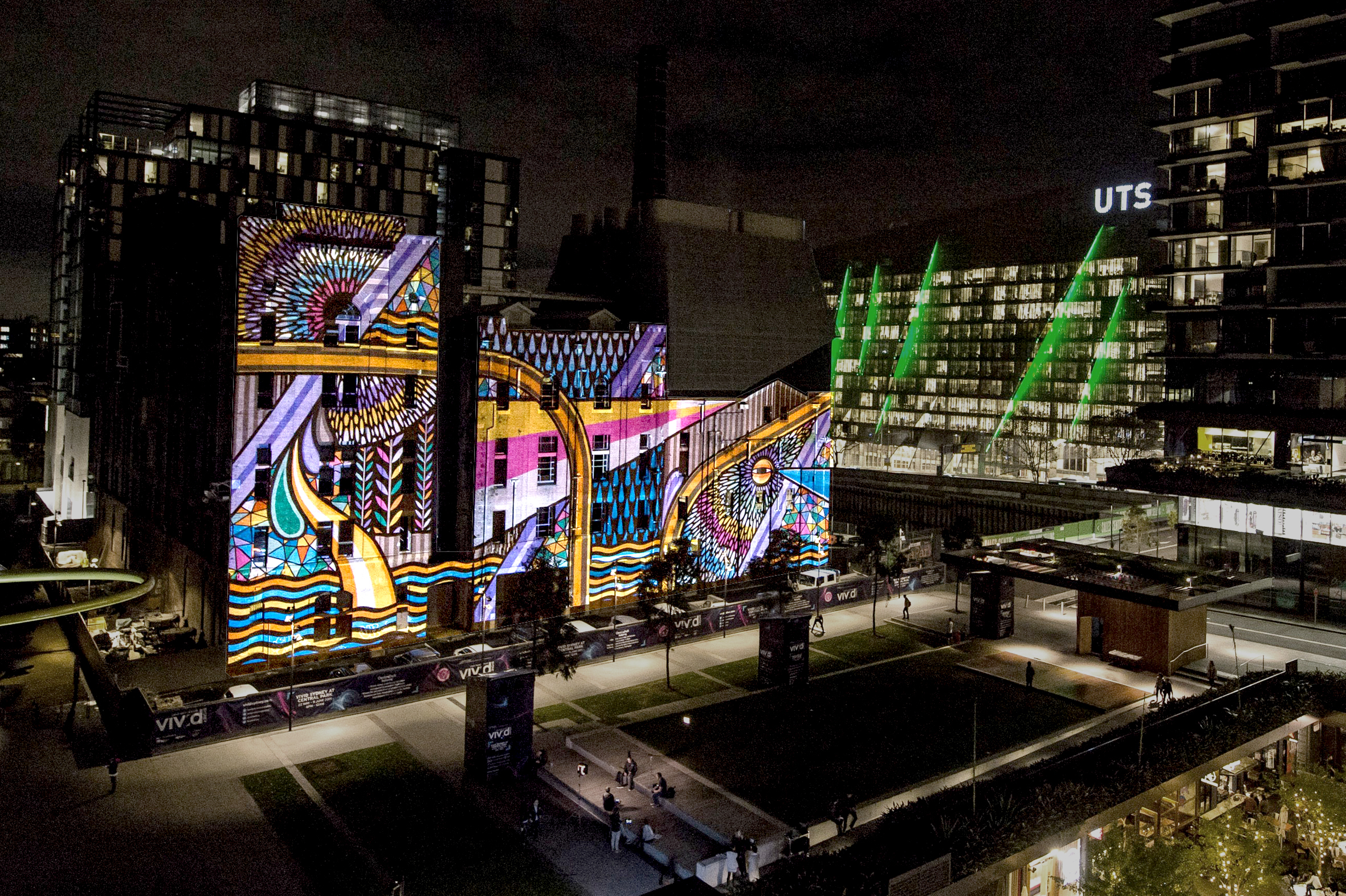 You may know his work even if you  don’t know the name. Beastman’s most recognisable motif for many years was  a lovable reptilian creature made up of raindrop shapes and with a gaping mouth. Painted with heavy black outlines and bright blocks of bold colour, his work makes a big impact from a distance.

“When I was younger I just wanted to draw monsters and stupid stuff,” he says. “As I’ve grown older my taste in art has become more mature. I am more interested in geometry, balance and colour theory.”

Indeed, you could find kindred spirits to the Beastman of now in Australian art of nearly a century ago. While working with shellshocked World War I veterans in  1919, Sydney modernist Roy de Maistre developed a colour-music theory. He and fellow artist Roland Wakelin created some of the earliest examples of abstract act produced in Australia: essays in bright colour and simple shapes. 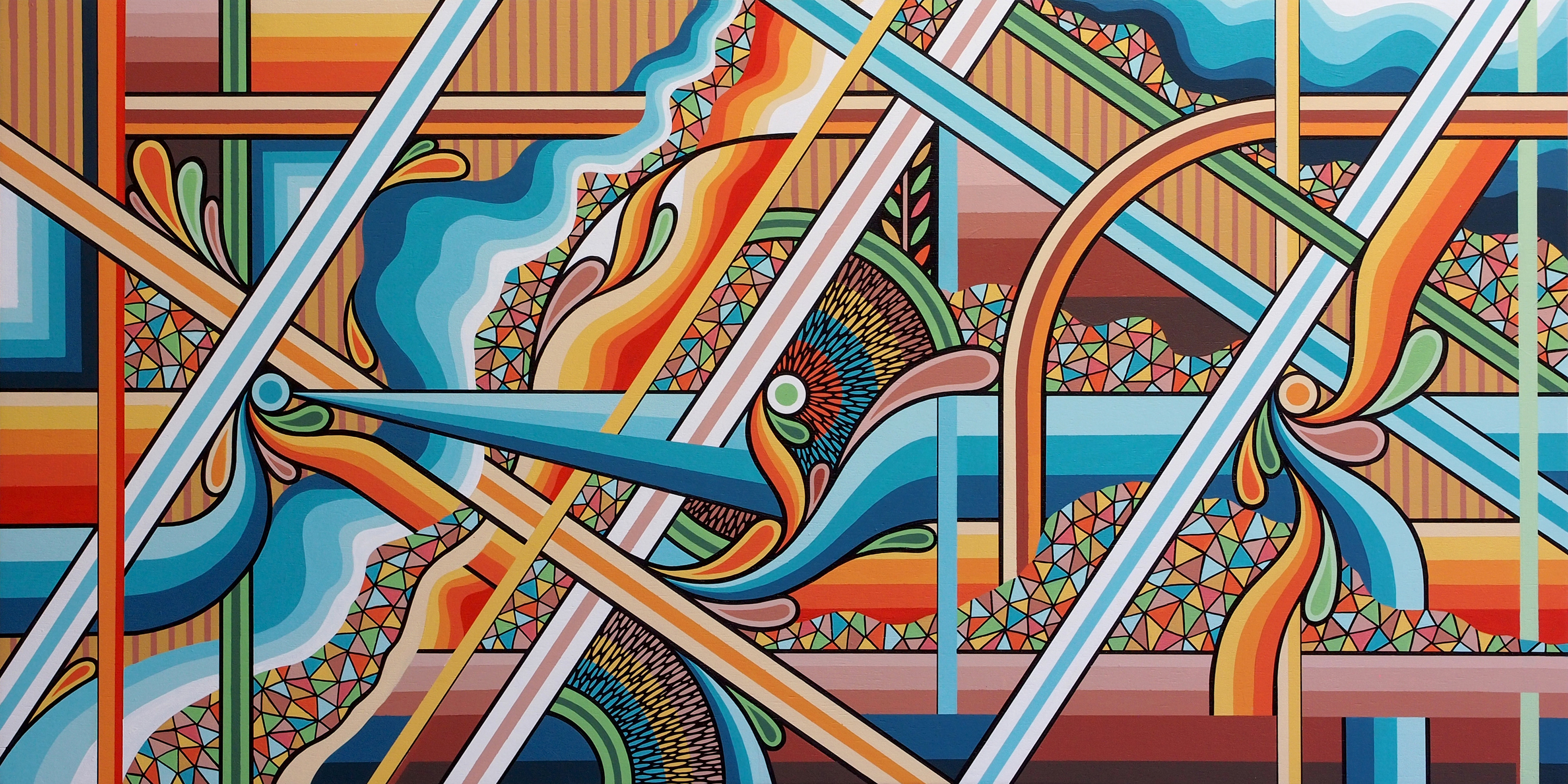 These days, Beastman’s art deploys simplified organic shapes: raindrops, triangular grids, leaves, eyes, pipes and rays. “The underlying theme of all the  work is ‘new life forms’. All the patterns are pulled from nature, stylised down: brown tones to represent the earth, blue for water, and the triangle is like a cluster of life. People have said the triangles look like stained glass – and that’s great.”

Time Out recently commissioned Beastman to create a mural inspired by  the company mission statement: ‘promoting those who drive positive cultural change; to inspire readers to lead a richer life, to know their city, and to have more fun.’ The results, which now grace the wall of Time Out HQ in Sydney, are reproduced here as a limited edition poster. “Everything that mission statement is about is what I’m about. I’m about cultural change, I’m on a constant mission to evolve my artwork… There are futuristic themes of what nature could become. My paintings are about  the future.”

There is a lot of Beastman out in the world. Original paintings are available  on his website (beastman.com.au) and the murals have popped up from Melbourne to Port Hedland, Adelaide to Brisbane, from neglected exterior walls to chic interiors. Collaborative murals with other artists  such as Numskull are among his favourite projects. “It pushes you to do something new and it’s more fun – there’s the  social aspect.” 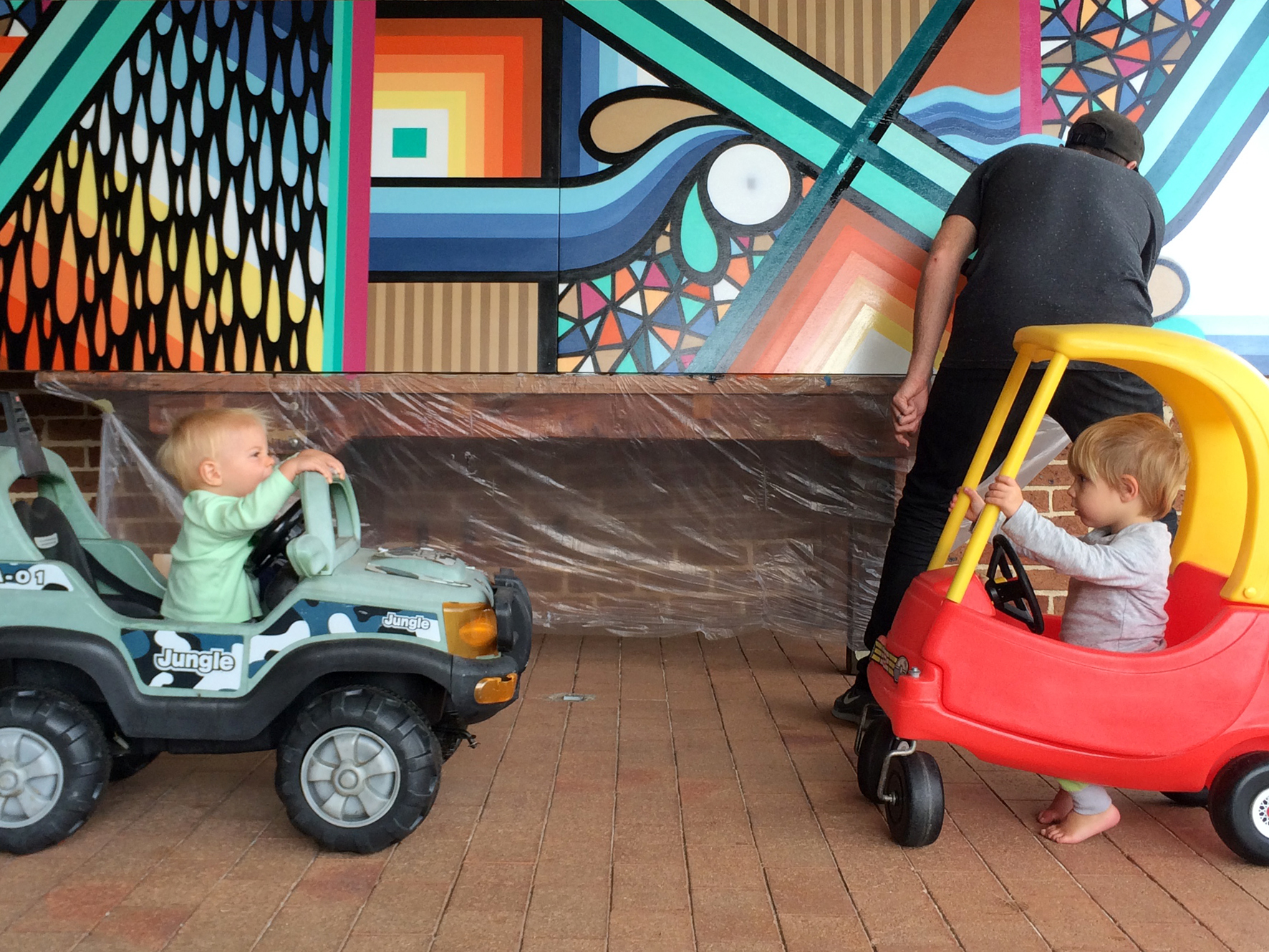 Painting the Time Out artwork, at home with sons Evander and Eamon

It’s been a big year for the artist.  For Vivid Sydney festival in May-June,  a huge Beastman animation was  projected onto the wall of Central Park  in Chippendale. In December he’ll be attending the Scope Art Fair in Miami  with the limited-edition print company 1xRun, which markets his work. He’s also negotiating with longtime friends at Ambush Gallery, Sydney to hold a multidisciplinary solo show in 2016.

In May, Beastman relocated to Canggu, Bali, to take advantage of a quiet, affordable, family-friendly way of life (he is married with two young sons, aged one and two).  He commutes to Australia and other countries where his work is in demand:  New Zealand, the US, Hong Kong, Israel, Germany. When Time Out catches up with him he has just completed two other mural jobs in Australia (one in Maryborough, Queensland, and another in Hobart) and was preparing to head home for the  opening of his first Indonesian exhibition.

Does his current lifestyle afford  him much skateboarding time? “I was obsessed right up to my late twenties,  but my kids don’t allow me to much,”  he says. “But I already teach my two  year old, so he’ll be skating soon.  He’s a fearless little guy.” 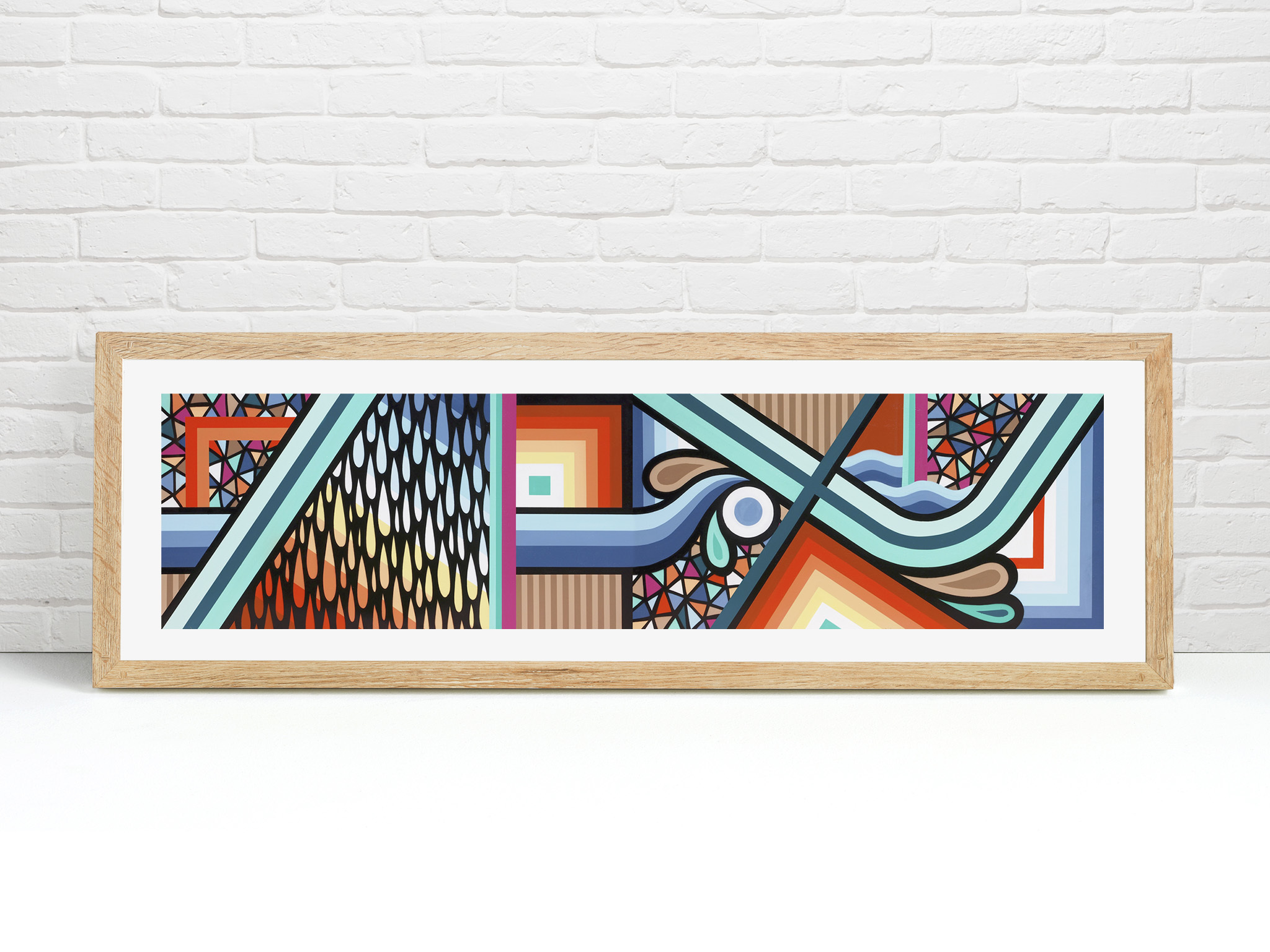 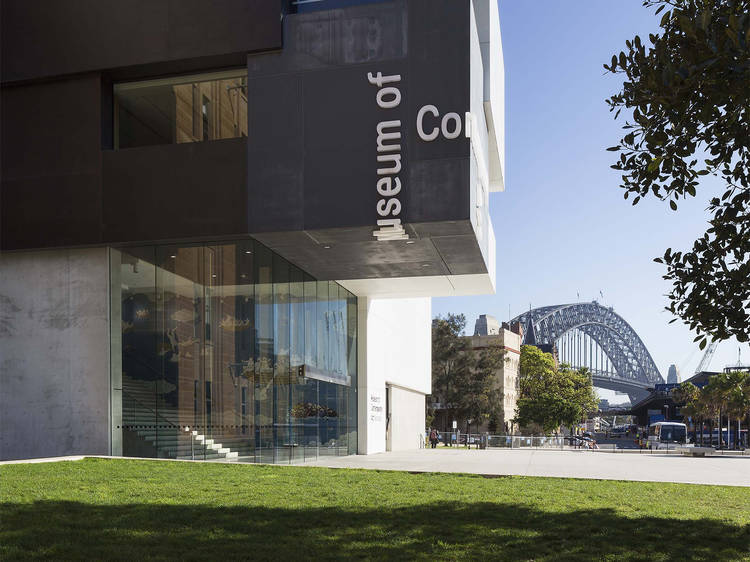 The best art galleries in Sydney

From contemporary art to classic Australian paintings, these are the best places to get your visual culture on in Sydney.