We often talk about art exhibitions going off with a bang, but the Museum of Contemporary Art’s summer blockbuster takes that phrase rather literally. Cornelia Parker’s solo exhibition (until Feb 16) features genre-defying works, like the blown-up garden shed that makes up Cold Dark Matter: An Exploded View (1991), steamrollered silver objects in Thirty Pieces of Silver (1988–89) and thousands of dried lumps of earth from one famous leaning tower in Italy for Subconscious of a Monument (2001–05).

These installations invite an Australian audience into Parker's world through the most extensive survey exhibition of her works in the southern hemisphere. Born in 1956 in Cheshire, Parker is one of Britain's most established artists. In 1997, she was shortlisted for the UK's most prominent art award, the Turner Prize, and in 2010 was awarded an OBE from the Queen and was elected to the Royal Academy of Arts, London.

The MCA’s exhibition presents 40 artworks from the late 1980s to the present, dealing with metaphors of war, violence and politics throughout epic installations, photography, films, drawings and installation. It’s all about the instability of the object and how we attach meaning to things, drawing from ideas of the Fluxus movement. “I wanted to make work that was ephemeral to describe the way I felt about the world,” Parker shared in an interview with curator Rachel Kent, “which wasn’t about being grounded at all.” 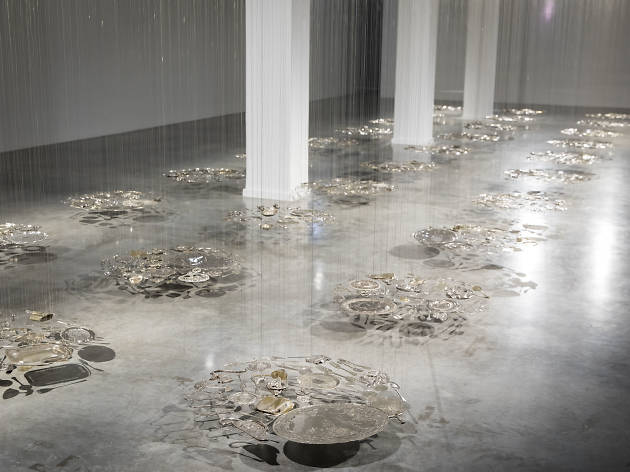 One of Parker's early breakthrough artworks is a perfect example of the connections between the object and its history. Titled after the 30 pieces of silver that brought Christ’s betrayal, this work consists of 30 circular formations of steamrollered silver-plated objects, collected from car boot sales, charity shops and friends. In 30 sets, 900 items are horizontally hung just above the ground level, putting the displaced volume back into the objects. The orientation also means with a breeze or passing visitor the installation gives off a light chiming noise – a peaceful sound offsetting the aggression of the work. “I was brought up with this chill of violence,” Parker explains. “'Thirty Pieces of Silver' was the first piece where I used destruction as a process.” 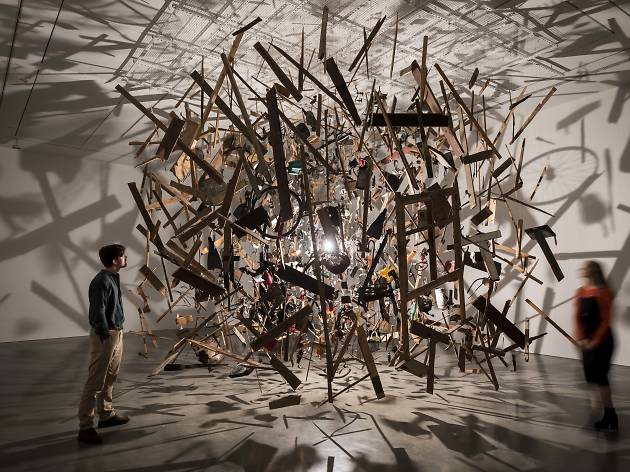 Parker was raised in the countryside of Britain, working the farm from a young age in the shadow of her father’s brutality. 'Cold Dark Matter: An Exploded View' (1991) explores this violence; the artist took a garden shed, filled with familiar household objects, and asked the British Army to blow it up. The artwork takes the remains, over 2,000 pieces – burned wooden shards, a diving fin, badminton racquet, a wrench – and suspends them around a single light bulb casting eerie shadows across the gallery walls. Like the IRA’s attacks throughout Britain that were happening at the time of the artwork, “it’s me trying to make sense of things that are unpalatable,” Parker shares, “like watching explosions daily on the news.” 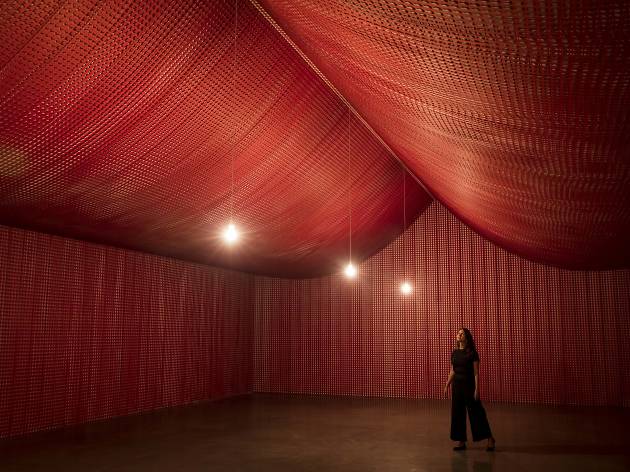 Taking these themes of violence and war, Parker was invited to make a work responding to World War 1, using what she called a “ready-unmade”. In 2014, the artist visited the Poppy Factory in Richmond, London, where she noticed the leftover paper from the poppy perforations. The machine churns through the material offering a solemn reflection on the gaps, the holes left by lost soldiers. 'War Room' (2015) uses the discarded red poppy paper, with over 30,000 perforations, for an installation in the gallery which takes the shape of a war tent. 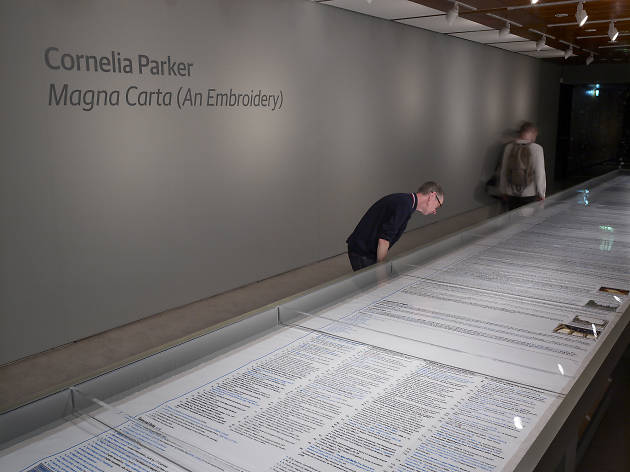 Ignoring the advice set by teachers across the world, the artist turned to Wikipedia for a commissioned artwork celebrating the Magna Carta’s 800th birthday. Spanning 13 metres, 'Magna Carta (An Embroidery)' (2015), is an epic embroidery of the Wikipedia entry for the Magna Carta –with over 200 names as collaborators, including Julian Assange, Edward Snowden, MPs and prison inmates from across the country. Looking closely at the artwork reveals several contributors’ distinguishing marks, like a small blood stain from Alan Rusbridger, the then editor of the Guardian UK. Parker shares, “I like the idea of the piece being stained with the blood of an editor.” 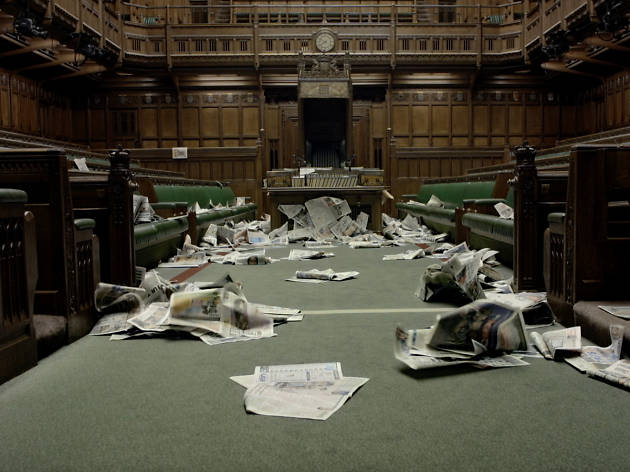 In 2017, Parker was named the official election artist for the UK’s general election. The MCA is displaying three of her works from that time, including the explosive video work 'Left Right & Centre' (2017). The artist sets the scene with three stacks of newspapers, descending in height from the MP’s reading list, right-wing, the middle, and the smaller left-wing pile in a darkly lit House of Commons. “The drone comes [in] with a vengeance: flying through the door, scattering all the newspapers everywhere,” Parker shares. “The newspapers all merged together in a large mess, becoming a tangle of left, right and centre.” 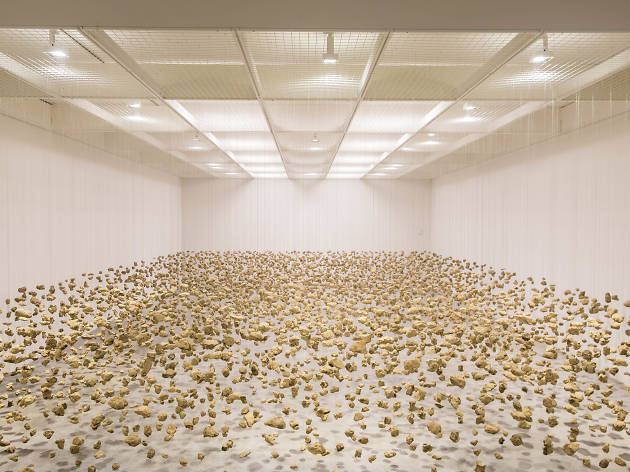 In an unusual turn of events, in 2001 Parker found out that the ground was being excavated from underneath the Leaning Tower of Pisa in Italy. She knew she had to make an artwork with the matter. To an almost hypnotising effect, 'Subconscious of a Monument' (2001–05) seems to dance in the gallery space; Parker collected and hung 7,800 lumps of earth, which give the supporting substance “its own chance above ground.” 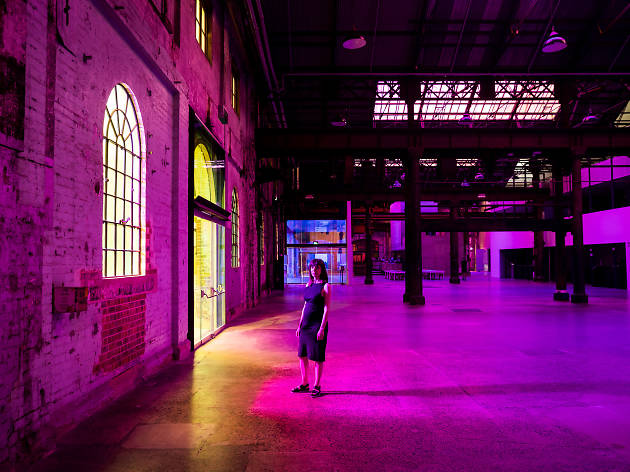 There's art in every corner of the city this month.