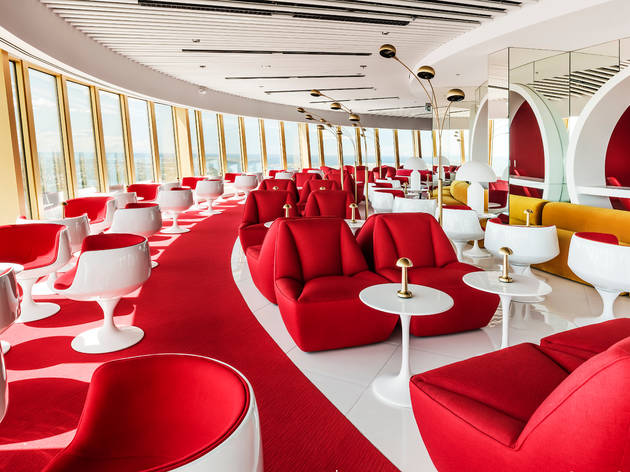 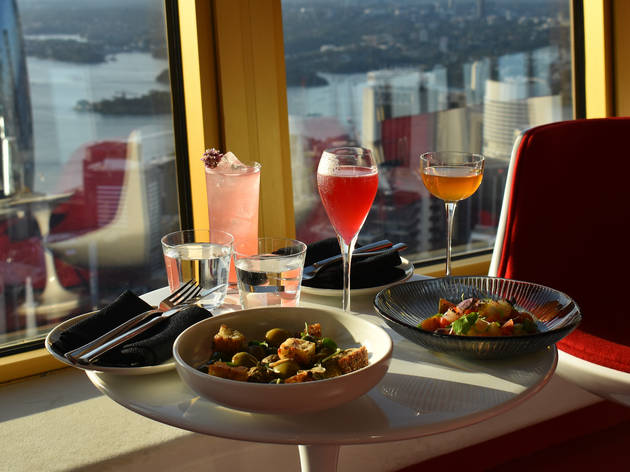 83 storeys above the streets of the CBD, this retro-styled '60s cocktail lounge boasts the best views in town

Stop me if you’ve heard this one: Barbarella, the Jetsons and Austin Powers walk into a bar…

The vibe of the top-to-bottom refurbishment of Sydney Tower’s top floor, now home to the loftiest cocktail lounge in the city, is not so much an ode to the ‘60s as it is a full-throated power ballad to the kitschest, campest, most swingin' design trends of the age. Sitting 83 storeys above street level, Bar 83's transformation involved removing internal walls to ensure that you can see breathtaking views of Sydney from any seat in the house, as well as a complete retrofuturist refit by Loopcreative that was more than two years in the making. The upgrades are part of a grand reimagining of the Golden Bucket’s three hospitality venues, including the complete overhaul and rebrand of the restaurant formerly known as 360, now named Infinity, and the casual diner and buffet restaurant, SkyFeast.

Bar 83 is a playful and eye-popping space, and while it leans hard into period references that predate the opening of the Sydney Tower by more than two decades, the aesthetics somehow feel entirely apt for this somewhat dated hero of Sydney's skyline. The design choices are fearless in their bold and uncompromising details: think lobster-red bucket chairs a la Eero Aarino’s unmistakable ball loungers; plush, velour-upholstered booths; glossy white tiles and brushed gold light fixtures.

All this could well have seemed a misstep on the drawing board – such bullishly specific decor might risk overwhelming the main selling point of the Sydney Tower, namely its iconic views. But far from wrestling attention away from the horizon, the design offers a pop art frame for these spectacular vistas, and a very comfortable and surprisingly intimate atmosphere for a drink.

Surrounded by such consummate dedication to period detail, you might assume the ‘60s time hop would extend to the bar menu. But apologies to those White Russian or Sidecar fans – this is an entirely contemporary cocktail offering, save for a rum, matcha and rose-infused creation called the Hal, a cute wink to Stanely Kubrick’s sci-fi epic 2001: A Space Odyssey, a film that shares more than a few design cues with Bar 83’s refit.

It’s a small selection – a total of eight signature cocktails – but features options to suit most tastes. The Jasmine Jasmine is a delightfully refreshing and subtly complex tall drink mingling gin, native bitters, lemon and hints of, you guessed it, jasmine, perfect as a sundowner after work. On the other hand, the Pain Pleasure Principle is a more robust fusion of cognac, cacao and lemon myrtle, that would make for an excellent nightcap.

The snacks menu is largely made for sharing, with local produce and fresh, accessible flavours front of mind, such as the cured crystal bay prawns, a take on ceviche, with the sweetness of papaya and heirloom tomatoes tempered by silken curds and a subtle parsley reduction. There are also less complicated, although still expertly executed, crowd-pleasers on offer, such as the lamb & chilli sausage roll or the roast beef sandwich. These seem tailored to a late-night crowd in need of a bite between beverages - shrewd thinking, given Bar 83 has a late licence until 2am.

It's these telling hints of forethought that speak to the future ambition of this bar, and the team behind it. Its quirky decor and knock-out views are a highly 'grammable draw; its cocktail list can go toe-to-toe with the best in the city while still appealing to a broad range of punters; and its bar menu has a weather eye on its future rep as a late-night one-for-the-road type establishment. Persuading the bar-hoppers of Sydney that the Tower is more than a tourist attraction could be a tall order, but as Sydney’s nightlife reawakens, not just after the national shutdown but after four years under the tyranny of the lockouts, this is an ideal time for a new venue such as this to stand proud as the kind of bar an aspiring 24-hour city needs.