Quentin Tarantino on The Hateful Eight

Written by
Nick Dent
Sunday 14 February 2016
FacebookTwitterPinterestEmailWhatsApp
Advertising
Interviewing Quentin Tarantino is like going to meet a Mexican drug lord and being ushered into the presence of Santa Claus. He is surrounded by publicists and handlers, not to mention the fug of his own personal legend, but in person he swiftly wraps you in the warm embrace of the love of movies and the unconditional desire to talk about them.
While a tropical storm brews outside Sydney’s Park Hyatt Hotel, Time Out files in to speak to the director about his epic new film The Hateful Eight, which just opened in Australia. It turns out that the mind that writes the most brilliant dialogue in movies is just as scintillating in conversation: how many other interviewees would come up with a phrase like “Zeitgeistery happenstance” on the fly?
Quentin, you’re a director who sits through screenings of his own work, as you did last night for the premiere of The Hateful Eight. What did you learn about Australian audiences from that?
What I learned about Australian audiences I actually learned at the premiere of Kill Bill Volume One [in 2003]. And I was kind of surprised. Australians seem to be a real fun-loving, gregarious people in almost every aspect, except when it comes to cinema going. They’re very similar to Japanese audiences. American audiences are very quick to laugh out loud. Australian audiences are too, but it usually has to be a broader comedy. We had laughs last night, but people aren’t laughing super-out loud or to make other people laugh – that kind of forest fire that can happen in audiences. It’s mostly laughing to themselves, or laughing to their partner.
Any key moments in The Hateful Eight where they responded unusually?
I was very gratified by the response to Sam Jackson’s monologue about Smithers’ son. A lot of audiences I’ve seen the film with really didn’t expect it to go where it went, and I think there was a lot of appalled shock and then guilty laughter. But one of the things that got me in particular was when Jennifer Jason Leigh’s character, Daisy Domergue, spits on the Lincoln Letter. There was an actual gasp in the theatre when she did that. [laughs] Even in Australia, they hold the Lincoln Letter sacred!
This film harks back to your debut, Reservoir Dogs. Is the character Jennifer plays in some way an apology for not having a strong female character in that film? Would you do Dogs differently now?
No: I literally cannot imagine Joe Cabot hiring a woman to be part of that gang. I cannot imagine him hiring a black guy to be part of that gang. Those racist white males are exactly who Joe Cabot would hire; who he would consider professionals. But The Hateful Eight does seem to me to be a bit of a full circle from Reservoir Dogs. You could describe this movie as a bit of a western Reservoir Dogs. Especially in the structure of the story, which really wasn’t intentional at all, but I recognised it by the time I was finished.
The film is fuelled by the racial tensions in the wake of the Civil War, and it has resonated in America for tackling that topic right now. Do you think that perhaps it also tackles gun control? Perhaps like a cautionary tale?
I know how I feel about gun control, but I don’t think the movie deals with gun control any more than any western, because [in the Wild West] people walked around with guns on their hips everywhere. That was the unfortunate by-product of that society: fortunate for me, as a scenario writer, unfortunate if I had to live through it!
But I do like the idea that I have dealt with race – particularly when it comes to black and white – in westerns. Because I actually think it’s a subject that hasn’t been dealt with by any of the great western directors in any serious way.
I do actually believe that I did touch on a bit of what’s going on in America today. I think that’s a by-product of westerns doing a really good job of showing you the decades in which they were made. Look at when westerns were most popular, in the ’50s. Those Randolph Scott and John Wayne westerns very much presented an Eisenhower-era American ideal, or perceived American exceptionalism. Whereas the westerns made in the late ’60s and through the ’70s lived under the shadow of Vietnam, lived under the shadow of Watergate. And I think, not by accident, but by I think Zeitgeistery happenstance, to be plugging in to the current vibe without necessarily trying to.
Maybe it’s asking for a needle in a haystack, but do you recall a film you saw as a kid that made a big impression on you, and perhaps set you on your course as a filmmaker?
One of the first movies that I saw as a kid that really, really blew me away was [1963 all-star comedy] It’s a Mad Mad Mad Mad World. I thought that movie was fantastic. It was such a great experience. I knew who most of the eight lead actors were. I knew who Mickey Rooney was. I knew who Buddy Hackett was (he was in The Love Bug). And I had the fun of watching it with my stepfather. If you remember the movie, everyone in the movie is famous to some degree. And my stepdad was pointing everybody out: “Oh, that’s ZaSou Pitts, she was a famous comedy actress from the ’30s…” It was really so much fun and so cool and when the movie was over, I couldn’t believe that we were leaving. It was a three-hour movie, and I would have just stayed there and watched it all over again. And that movie was made with the exact same lenses that we used on The Hateful Eight. Not just like them: the exact same ones.

The Hateful Eight is now showing. 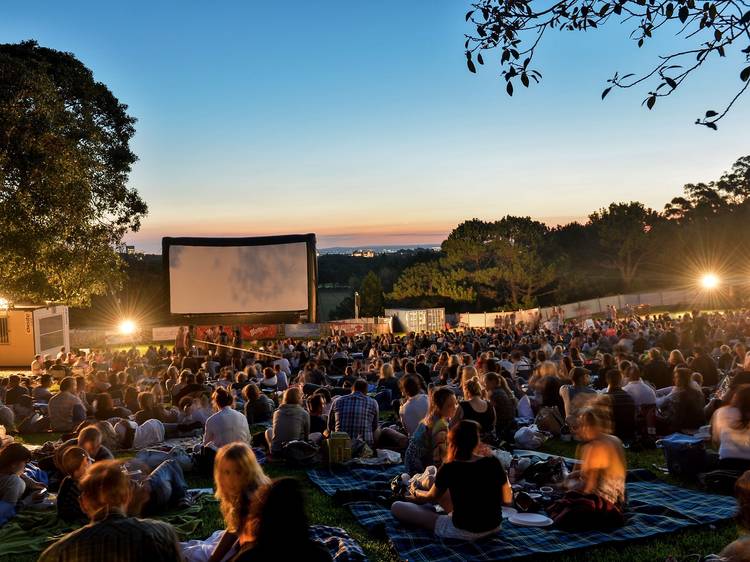 Pull up a pew at one of Sydney's best outdoor cinemas, from the Eastern Suburbs, to drive-ins way out West.