See Egyptian mummies and much more at this museum of art, science, history and ancient cultures

Art, science, history and ancient cultures meet under one roof at the purpose-built Chau Chak Wing Museum, whose collections are 150 years in the making. The museum combines three powerful collections from the vaults of the University of Sydney – including three ancient Egyptian mummies. The Chau Chak Wing Museum is open seven days a week, and entry is free. It is well worth setting aside a couple of hours (at least) to explore this treasure trove.

While mummies and the tomb artefacts that accompany them are no doubt a major drawcard for visitors to this crown jewel in Sydney’s museum scene, there’s plenty more to hook you into its 18 exhibitions – from curious taxidermies (you can get up close to some of Australia’s oldest natural history specimens) to contemporary and traditional art. Walk in the footsteps of ancient Romans, Greeks, Cypriots, Italians, Chinese and Indigenous Australians – and peek back even further with artefacts that predate history. If the array of historical objects somehow don’t quite immerse you, the Lego model of Pompeii, one of the largest Lego historical models ever built, just might.

“I think we’ve got an incredible diversity of material and exhibitions, but we’re small enough to really not feel as though you’re missing anything,” deputy director Paul Donnelly tells us as he walks us through the museum. “You can wander through here in the relative luxury of knowing you’re going to see the whole thing, without any sense of pressure."

The new facility brings together the university’s existing collections, including the Nicholson Collection of antiquities (founded in 1860, it’s the largest collection of antiquities in the Southern Hemisphere), the Macleay Collections of natural history, ethnography, science and historic photography, and the University Art Collection – 70 per cent of the items on display have not been seen publicly in more than two decades.

The contemporary architecture of the museum stands in harmonious opposition to the traditional sandstone buildings of the Camperdown campus, and the interior design across its four public floors (there’s a fifth, for storage) is sophisticated. Donnelly explains that there was a conscious decision to use four different designers to create a range of tempos and styles and to prevent tediousness as you move through the exhibitions.

The true beauty of the Chauk Chak Wing Museum, however, is in the way it combines its collections and prompts the viewer to look at the world in new ways. It’s more poetic than clinical. Natural history specimens are grouped with art and artefacts. The Aboriginal and Torres Strait Islander collections are not sidelined in some box-ticking small gallery off the side, which is how it can often feel at major museums. Instead, Indigenous art and artefacts are interspersed throughout the exhibitions. Indigenous curator Matt Poll has worked with people from eight regions of Aboriginal Australia on the Ambassadors series, so that their own voices are prominent in the display of artefacts from their culture.

“If you’re going to have an incredibly diverse collection, why not maximise the potential of that?”

The incorporated approach of the museum is an extension of the University of Sydney’s groundbreaking interdisciplinary approach to degrees. “The university and our increasingly globalised world are very interdisciplinary. We’re no longer in our little silos, so this museum is really a great way of demonstrating the benefits of that approach.

Donnelly’s Object/Art/Specimen exhibition is a good inroad to this incorporated approach. “It demonstrates how our objects talk to each other, the kinds of conversations they can have between themselves, but also the kind of issues that they raise from our audience,” he explains. In one grouping, a 16th-century Flemish oil painting of Adam and Eve juxtaposes one of Robert Indiana’s iconic pop-art ‘LOVE’ screen-prints from the ’60s. Between them, a row of vibrantly coloured eclectus parrot specimens fill a glass case, the size and colouring of the two sexes vastly different. “Up until the early twentieth century, taxonomists thought these were two different species, such were their expectations of the gender relationship,” explains Donnelly. “Don’t judge a bird by its feathers.”

Elsewhere, Sydney-based Indigenous artist Daniel Boyd’s temporary exhibition Pediment/Impediment is the first in a series of contemporary art commissions. In the darkened Penelope Gallery, pinpoints of light veil classical plaster casts with his signature dot designs, a reference traditional Aboriginal dot paintings. Boyd’s design literally and figuratively casts new light on the artefacts, which are symbolic of western civilisation and the Enlightenment, decolonising their significance in an act of resistance.

Over in the Egyptian Galleries, each mummy is called by name. As an archeologist, Donnelly has “dug up lots of skeletons” in his time, but he still feels displaying human remains requires deep consideration. “I see the difference between research and then, voyeurism," he says.

"If you’re going to look at these mummified people, then it should be done with the utmost respect"

“The reason they were mummified is because the Egyptians believed that you only maintained the afterlife as long as your body, your corporeal being, survived in some recognisable form, so your spirit could come back... If that stopped, then you were gone forever. Another part of that was having your name said, so we call these mummies by their names.”

Donnelly has had a hand in the curation of all the exhibitions, and he has stories to tell about each and every item on display, like a hand axe dating back 500,000 years (predating homo sapiens by 300,000 years). His favourite item, however, is one of the last mechanical computers invented, showing as part of the Instrumental collection.

“These exhibitions are all responses to design and cultural and artistic output. Whether it's the 1970s or 1600 BC, it's still interpreting artefacts and looking for meaning in those artefacts. I’ve enjoyed [helping to curate] the ancient parts but also the contemporary.”

The new museum is a gateway into the university grounds for people who are not students or academics, and it demystifies one of Australia’s greatest places of academic significance. Take the time to explore it.

The Chau Chak Wing Museum, along with the museum café and shop, is now open seven days a week. Entry is free, check the website for admission requirements. 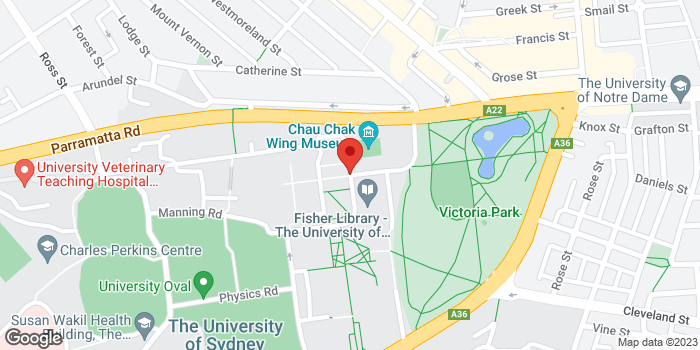