There's no need to sulk if you can't make it up to Byron Bay for Bluesfest – many of the international artists are paying a visit to Sydney along the way. We've rounded up the best Bluesfest Sideshows coming to town. There are legendary names from the formative eras of R'n'B and punk, contemporary rockers, world music pioneers, exciting prodigies and much more. 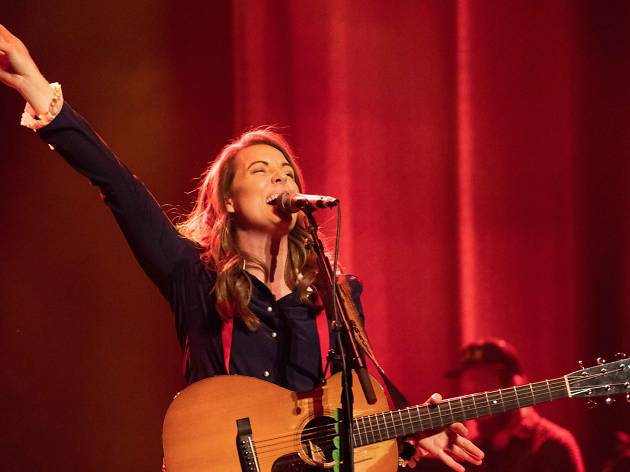 American singer-songwriter Brandi Carlile has locked in headlining shows across Australia amid a landmark year. Carlile's style is grounded in alternative country and spans many genres including rock, pop and folk. Arguably one of the biggest names in the US right now, Carlile has won three Grammys for her sixth album By the Way I Forgive You, sold-out Madison Square Garden, and collaborated with the likes of Dolly Parton, Mavis Staples, Sheryl Crow and other greats. You can catch her at the Enmore Theatre on April 8; tickets start at $101.50. 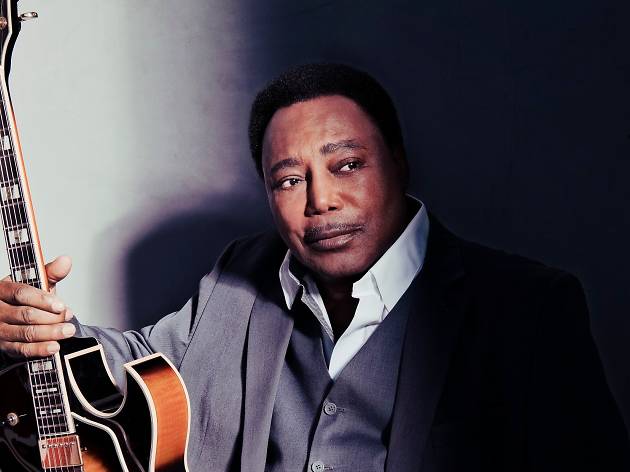 One of the world's greatest guitarists is coming to Sydney for headline shows ahead of his performance at Bluesfest. George Benson has won ten Grammys (and been nominated for a further 15) throughout his expansive career, which began in the '60s. His first Sydney show sold out in ten days, prompting a second show at the State Theatre on April 5 – you'll want to get in quickly for the remaining tickets, starting at $109.50. Benson will be crooning out hit songs including 'Turn Your Love Around', 'Inside Love' and 'Nothing's Gonna Change My Love for You'. 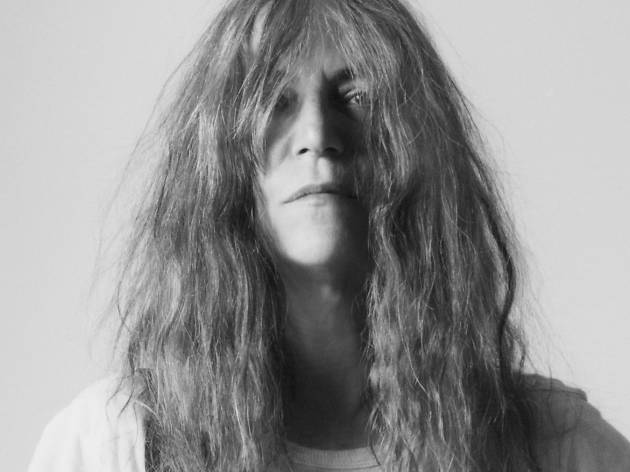 The godmother of punk returns after an award-winning sell-out Australian tour in 2017, and this time her son Jackson is joining the band. Living legend and Rock'n'Roll Hall of Famer Patti Smith is playing two intimate shows at the Enmore Theatre on April 15 and 16, and they're selling out fast. Smith has plenty to draw on: her 1975 debut album Horses was followed by another nine albums, books of poetry and a best-selling memoir Just Kids. Smith is just as excited to return to Australia as her fans are to have her, saying: "I really thought that I wouldn’t be able to come back – so I’m delighted that I was wrong." Tickets start at $162.30. 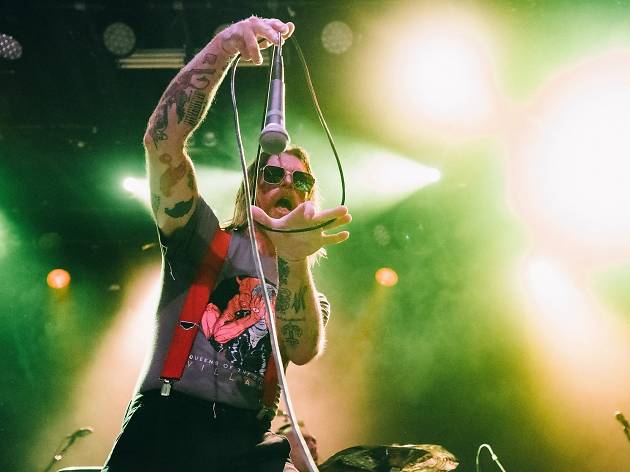 This big, brash rock band returns to Australia for a good time. Founded by Palm Desert best friends, frontman Jesse Hughes and Josh Homme (also of Queens of the Stone Age fame), the Eagles of Death Metal do what they say on the tin – serving up a bold show and a sound that is what a cross between the Eagles and a death metal band would sound like. Jesse Hughes and band will be smashing out tunes from their brand new studio album Eagles of Death Metal Present Boots Electric Performing the Best Songs We Never Wrote, featuring 13 cover versions of songs that inspired Hughes over the years. They'll be at the Metro Theatre on April 16; tickets are $72.50. 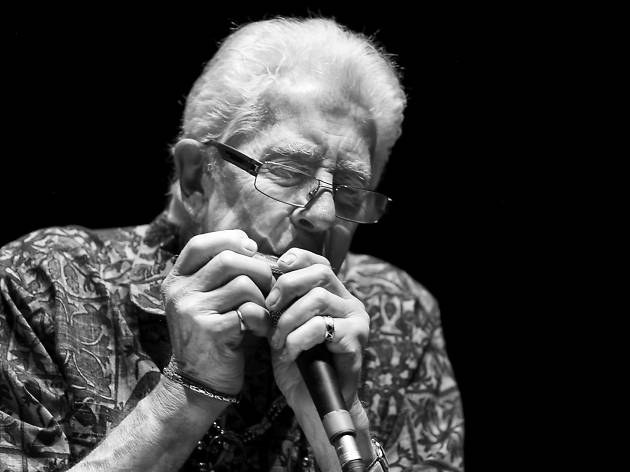 The ‘Godfather of British Blues’, John Mayall is returning to the land down under. This 86-year-old singer, songwriter, multi-instrumentalist, producer, front man and self-professed "road dog" has released a staggering 62 albums. He famously hates a day off and even carries his own gear at gigs. As a musician, Mayall backed blues greats John Lee Hooker, T-Bone Walker and Sonny Boy Williamson on their first English club tours before creating the Bluesbreakers in 1963 where he initiated future stars such as Eric Clapton to the scene. Mayall comes to the Factory Theatre on April 18 as part of a ten-date Australian tour; tickets are $94.95 and selling fast.

Blues sisters Larkin Poe are back after a sell-out run in 2019 to play even bigger venues in both Melbourne and Sydney. The Lovells are a breath of fresh air in the blues scene – multi-instrumental artists with a unique brand of
gritty, southern-fried blues, roots'n’roll. Making music under the name of their great-great-great-grandfather, Larkin Poe, the sisters are also distant relatives of mystery and suspense writer Edgar Allen Poe. The pair's high-profile fans include Elvis Costello, Keith Urban, Bob Seger and Russell Crowe. They'll be tearing up the Factory Theatre on April 15; tickets are $66.40. 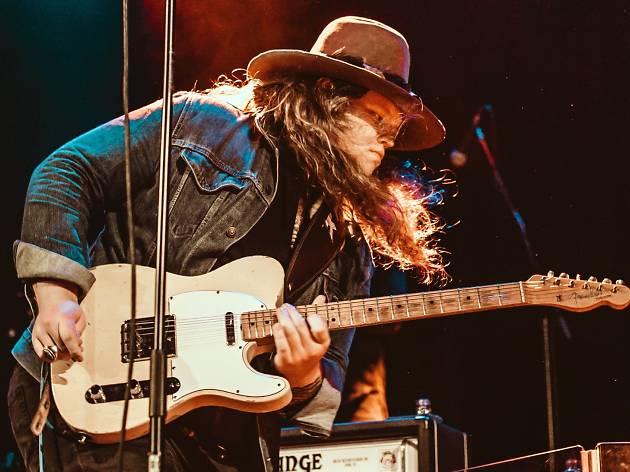 The frontman of this South Carolina blues/rock band is fast becoming one of the most soulful voices of his generation, at only 23 years old. This six-string hotshot has appeared on The Late Show with Stephen Colbert, at the Grand Ole Opry and in sold-out headline shows across the US. King and his band return to Australia stronger than ever to play bigger venues after selling out their last sideshows. They play the Metro Theatre on April 13 and tickets are $66.70. 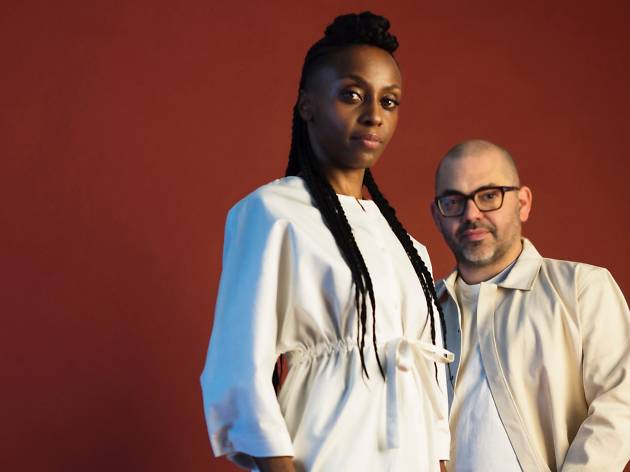 Emerging from the mid-'90s trip-hop scene, this English electronic band played an integral role in defining the chill-out genre. You would be remiss not to recognise their break-out 2000 hit ‘Rome Wasn’t Built in a Day’. Frontwoman Skye Edwards will be enchanting crowds with her velvety tones as she croons hits from their more than two-decade history and 2018 album Blaze Away. They'll be at the Enmore Theatre on April 9 where tickets are $87.30. 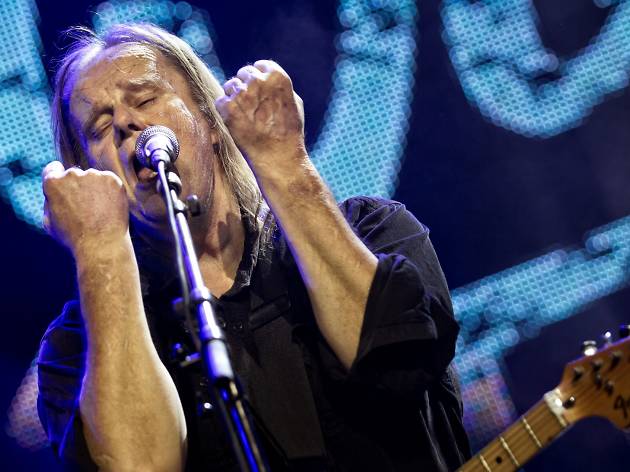 American blues guitarist and singer-songwriter Walter Trout has a music career spanning back to the late '60s and a fiery passion for his craft. He was worked with and inspired greats including Joe Bonamassa and Coco Montoya. Thirty years sober and having rebounded from near-fatal liver disease in 2013, Trout is back touring in Australia with well-earned blues and a lust for life. You can see him at the Factory Theatre on April 8; tickets are $71.50. 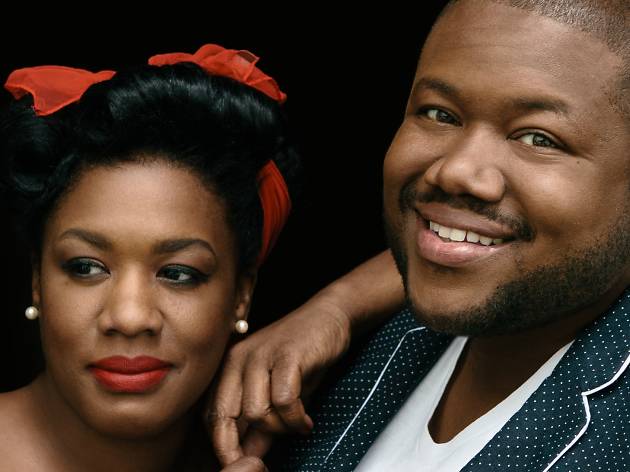 The War and Treaty are back for more in 2020 after enchanting crowds at Bluesfest last year. This husband-and-wife duo blends roots, folk, gospel and soul and has a fascinating backstory. Shipped off to serve in the Iraq War, Michael Trotter nurtured his gift for music on a piano left behind in one of Saddam Hussein's abandoned palaces. Having come from a musical theatre background and a role in the movie Sister Act 2, Tanya is no stranger to performance. The pair met and fell in love at a music festival in 2010 and thus began their passionate journey. Catch them at the Factory Theatre on April 9; tickets are $56.20. 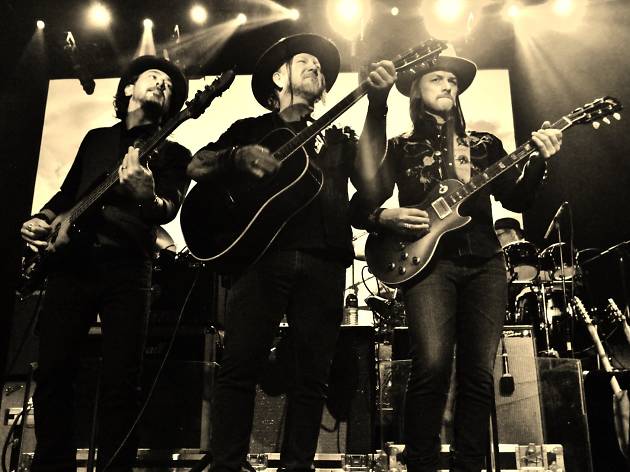 In honour of the 50th anniversary of classic rockers the Allman Brothers Band, their sons in the Allman Betts Band are treating fans down under to debut Bluesfest sideshows. Fronted by Devon Allman (son of Gregg Allman) and Duane Betts (son of Dickey Betts), the band will be performing a repertoire gleaned mostly from their respective solo careers as well as a handful of Allman Brothers gems and their 2019 number one rock chart hit debut album, Down to the River. They play the Oxford Art Factory on April 8; tickets are $61.71. 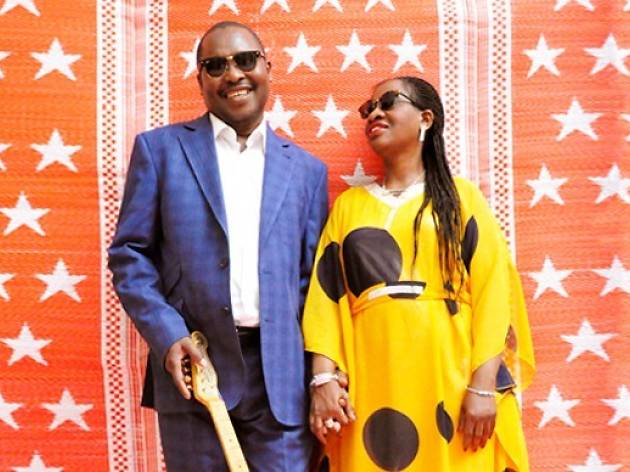 Get your dancing shoes ready for some bangin’ Afro-pop
beats from Amadou and Mariam this April. For the past 40-odd years this duo have managed to joyfully combine their love story with a musical career while becoming the world's most famous ambassadors for Malian and African music. They've worked with producers and artists like Damon Albarn (Blur, Gorillaz), Manu Chao, Santigold, Miike Snow and the Yeah Yeah Yeahs. They've also influenced the likes of Four Tet and Jamie xx. Get down to this tenaciously positive duo at the Factory Theatre on April 12 – tickets are from $70. 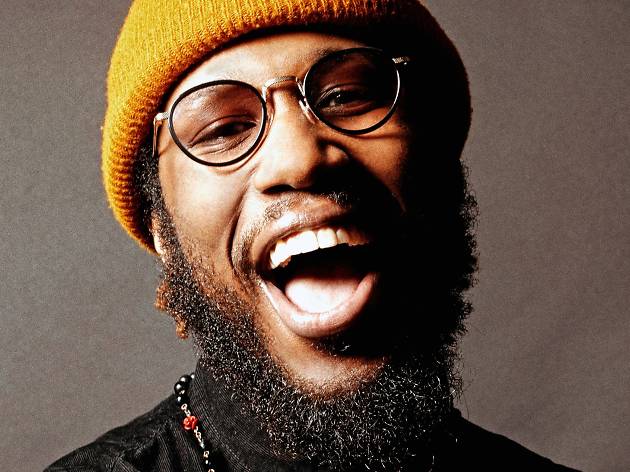 Among modern music’s most inventive minds, Cory Henry brings his Funk Apostles to Australia for the first time in April. Dominating the stage as a former member of Grammy-winning Brookyln jam-band Snarky Puppy, Henry was personally selected by Quincy Jones to headline his curated Soundtrack of America in New York City. He was worked with the likes of Lauryn Hill, Frank Ocean, J Cole and Vulfpeck among many more. See this powerful singer-songwriter and multi-instrumentalist in his element at the Metro Theatre on April 9; tickets are $73.55. 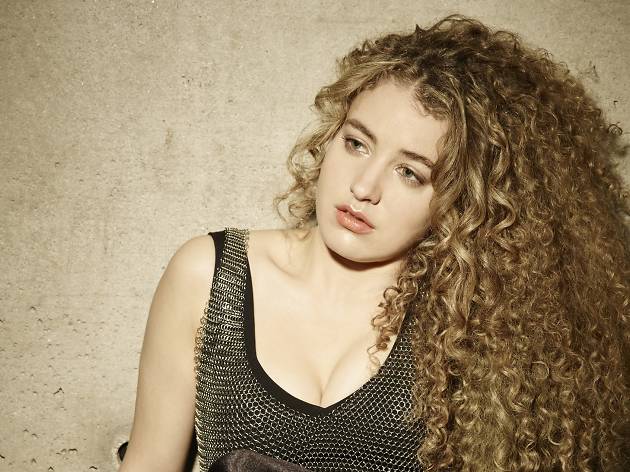 Supremely talented singer, songwriter, guitarist and bassist Tal Wilkenfield returns to her hometown, Sydney, with her debut album. Wilkenfield has spent the bulk of her career playing with veteran rock musicians like Jeff Beck, Prince, Herbie Hancock and Eric Clapton. She picked up a guitar at 14 and it wasn't long before she dropped out of school and emigrated to the States to study electric guitar where she then began making a name for herself in New York’s jazz clubs. Wilkenfield dropped her vocal debut album Love Remains earlier this year and it reached No 1 on the Billboard Heatseeker charts on the first week of release. Catch her at the Oxford Art Factory on April 16 – tickets are $60.69. 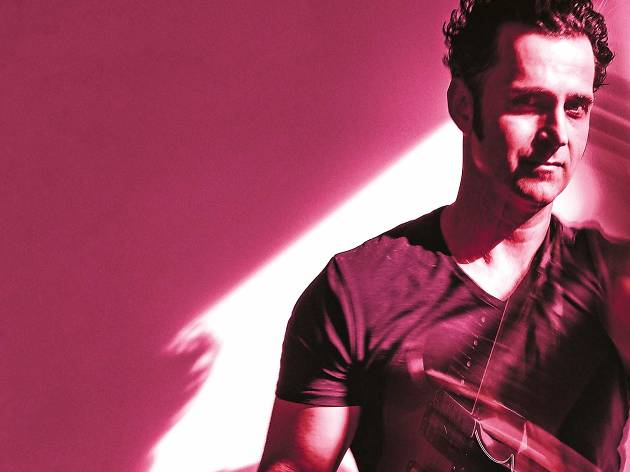 To celebrate the 50th anniversary of Frank Zappa's legendary 1969 release Hot Rats, his son and master guitarist Dweezil Zappa will perform the album in its entirety. He has long made it his mission to celebrate the sounds of his infamous father in a fresh context, whilst keeping true to Zappa Sr's unique and impeccable sonic heritage. In addition to the album that was dedicated to him upon his birth, Zappa Jr will also perform other Zappa musical marvels with a full band of ultra-talented performers. See it all unfold at the Enmore Theatre on April 12, tickets from $89. 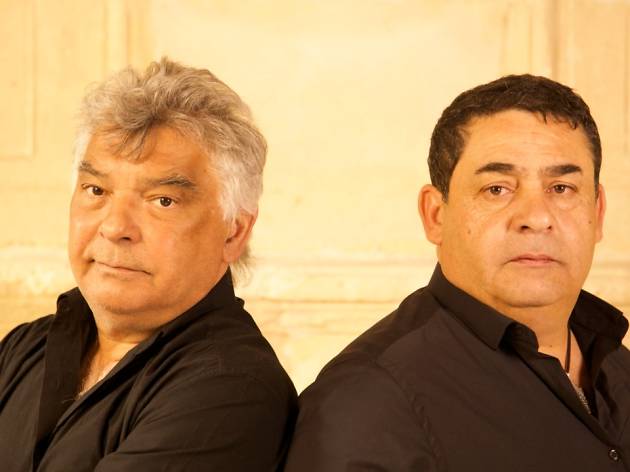 It's been five years since the Gipsy Kings toured Australia and we're more than ready to get our hips moving once again to their unique brand of upbeat flamenco pop. The band's two original singer-songwriter-guitarists, Nicolas Reyes and Tonino Baliardo, are still fronting the Gipsy Kings, performing infectious hits such as ‘Volare’, ‘Djobi Djoba’, ‘Bem Bem Maria’ and the worldwide smash hit 'Bamboléo'. Their irresistible blend of traditional flamenco with Western pop and Latin rhythms takes over the State Theatre on April 12, and tickets start at $99.95.

Read more
Book now
Get us in your inbox