Australia’s most prestigious art award and exhibition will soon be open to the public for its 2022 iteration, but in the meantime, the Art Gallery of NSW has given us a tasty sliver of what to expect of the 2022 Archibald Prize with the announcement of the winner of the Packing Room Prize. Judged by the Art Gallery staff who receive, unpack and hang the entries, including head packer Brett Cuthbertson, who holds 52 per cent of the vote, the Packing Room Prize is a $3,000 cash prize awarded to the entry that really catches the team’s eye.

This year the honour goes to British-born, Sydney-based, self-taught artist Claus Stangl for his 3D-style portrait of Academy Award-winning and Emmy-nominated New Zealand writer, director, actor (and everyone’s crush) Taika Waititi. Waititi sat for the painting while he was in Sydney filming the upcoming movie Thor: Love and Thunder (released on July 8) which he wrote, directed and portrays the character Korg in.

“We tried a few poses, but I wanted to allow him the feeling to play and express himself,” says Stangl. “This piece is part portrait and part performance – an apt execution for a man that is as comfortable in front of the camera as he is behind it.

“After sharing some concepts with Taika, we landed on the idea of making a 3D-style portrait using the icon reds and greens from '80s retro cardboard glasses. Painting in 3D style was the hardest thing I have ever painted, because there are two of everything, two of each pupil, two noses, everything shifted. But I learnt so much and it was worth it.”

This is the fourth time Stangl has entered the Archibald Prize, and the second time he has been a finalist. The first was in 2020 with his portrait of Sydney hip-hop musician Sukhdeep Singh Bhogal – better known as L-Fresh the Lion.

In a bittersweet twist, this is Brett Cuthbertson’s final year as head packer as he retires from the Art Gallery after 41 years. Cuthbertson says he was thrilled to award his final Packing Room Prize to a portrait of one of his favourite movie makers. 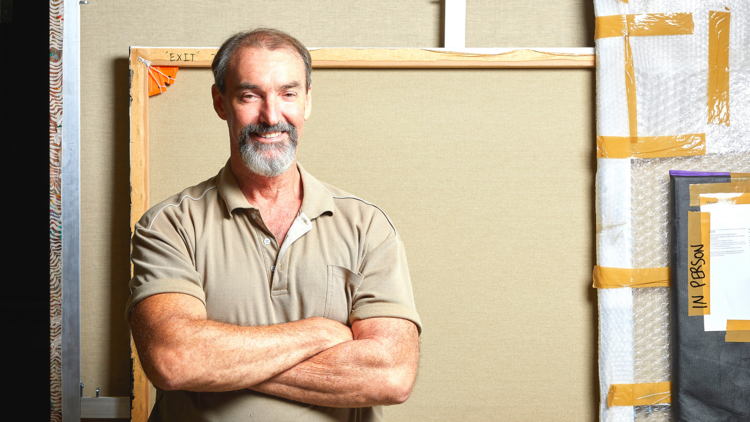 Photograph: Supplied/AGNSW | Head packer Brett Cuthbertson is due to retire

“The painting immediately grabbed my attention, I love the look on his face and his pose," he says. "It’s the first time I’ve seen a 3D painting come in, but it’s kind of a fake 3D. I’m very happy this is my last Packing Room Prize choice. I think people wouldn’t have expected me to pick this one, I usually pick more realistic-style portraits, so it’s nice to go off with a bang!”

The Archibald Prize, along with the Wynne and Sulman Prizes and the Young Archie competition will be open to visit from May 14 to August 28 at the Art Gallery of NSW. Find out more here.

Want more art in your life? The Biennale of Sydney is still taking over nooks and crannies all over the city.