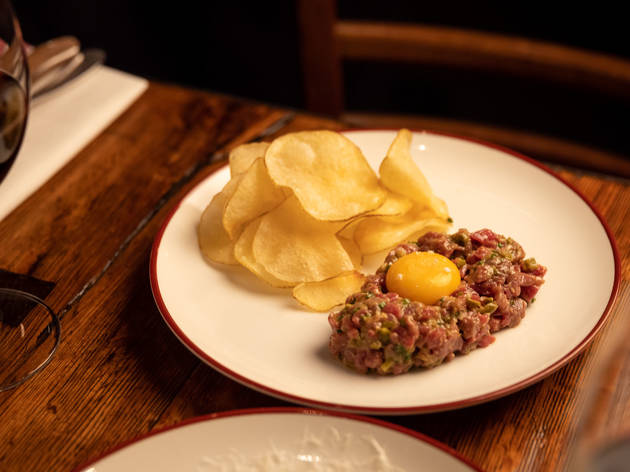 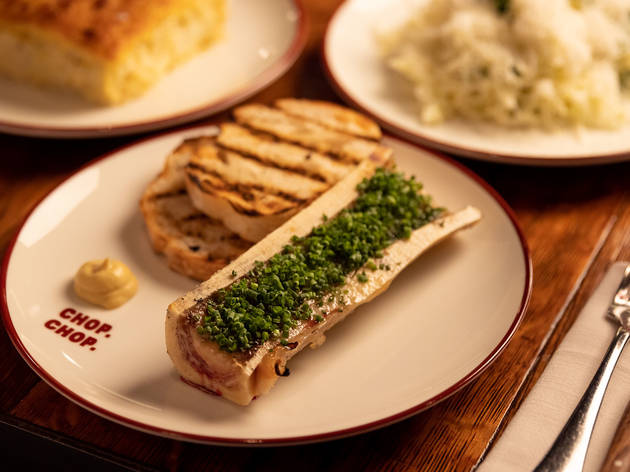 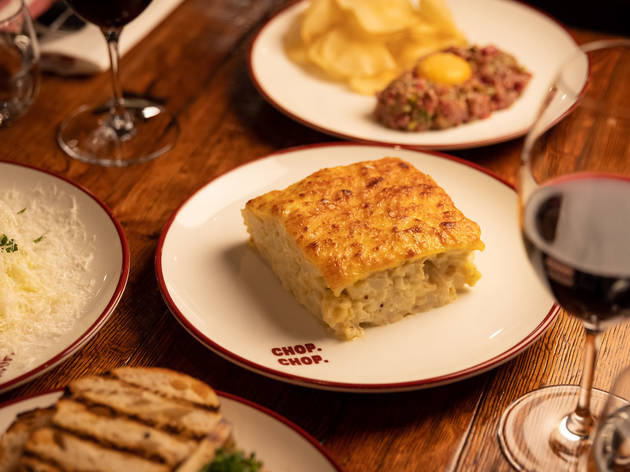 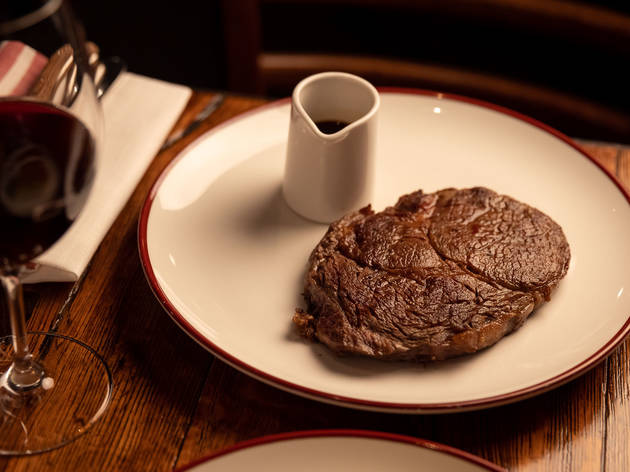 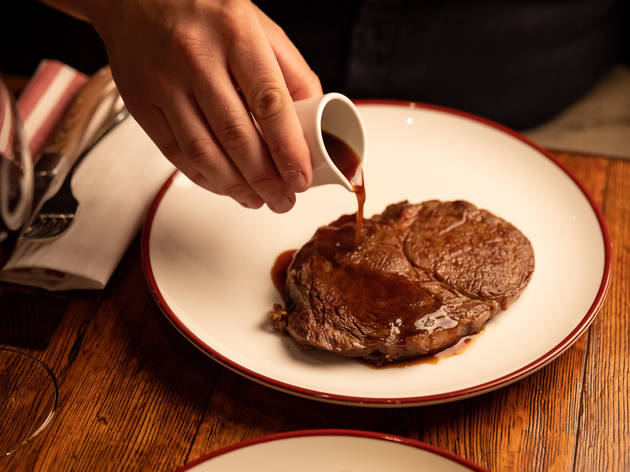 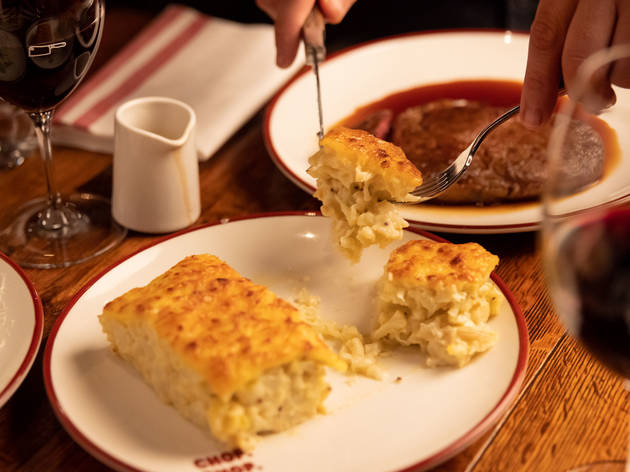 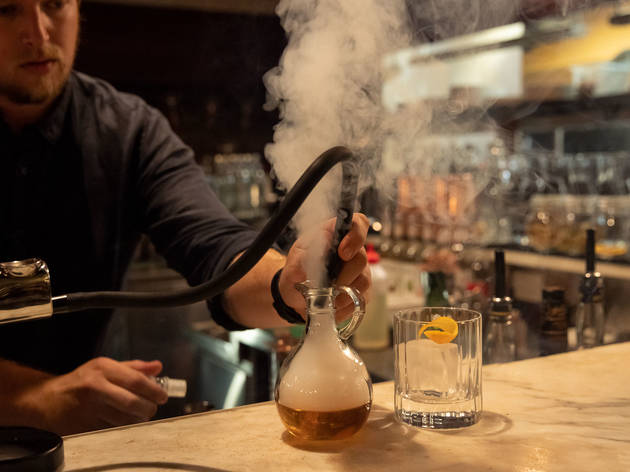 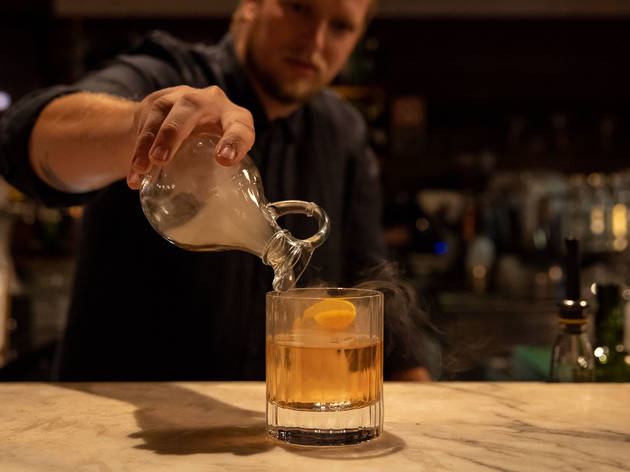 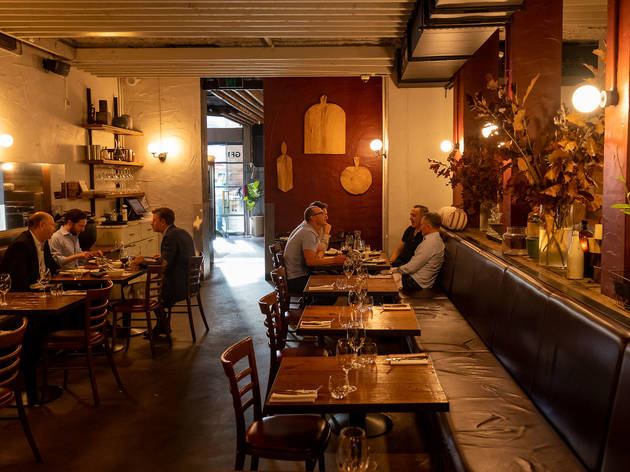 At this city steakhouse, they cut straight to the good bits and don’t mince words

The arching ribs that line the vaulted ceilings of Matt Moran's Chophouse might put you in mind of Jonah and his biblical whale, but unlike that poor repenting soul, you’re probably sitting in this richly masculine dining room because you deserve a reward, not punishment. Business celebrations seem to be the order of the day at surrounding tables where one group swaps tales of heroic negotiation, while another toasts financial success. Who doesn’t love an excuse to crack a big, expensive bottle of shiraz and order all the sides with your steak – the midlife answer to a pick’n’mix.

The joy of a steakhouse lies in its simplicity. Curveballs are not welcome on a single page menu with laser-like focus that deftly skips from appetisers to steak and sides with nary a detour. Entrees are a roll call of familiar faces – oysters, crab on toast, burrata, king prawns, charcuterie and house-cured salmon. In the animal kingdom, carnivores prize bone marrow as a rich source of calories. On the more domesticated streets of Sydney, we order it because it’s a profoundly indulgent way to kick off a devotional to all things protein. The sharpness of mustard and fresh chives help even the keel, but there’s no denying that two very generously topped crisp breads could have easily stretched to four with more bread. For more primal thrills, order a steak tartare that’s as smooth as suede (thanks to a whole egg yolk) and balanced by confident pickle and caper application.

The single divergence permitted on the menu is the grilled pink snapper, for your lone pescatarian. For everyone else, the aim of the game is clearly earmarked by the dry-aging fridge set into one wall as you walk in – this is beef country, and they take the rules very seriously. Do you not share well with others? Do you shudder at the thought of someone taking that perfectly pink piece of centre steak from you? You can order your own fully-contained cut from a selection of four from the grill – no sharing obligations attached. But to get your hands on the Moran family beef from their farm in Oberon, you need to level up to the ‘on the bone’ menu, where meat is priced by the 100g and minimum weights are enforced. You won’t get much change from a greenback (or any, really) down this route, but if you can’t go past the flavour rewards of meat cooked on the bone, this is the rib-eye you seek.

Steak, like a roast, does its best work with a cast of supporting actors, and at Chophouse, the chief amongst them is the cauliflower and comte gratin – a ratio of perfectly tender veg to cheese sauce that triggers the ‘more’ reflex – and a downy undulation of finely shredded sugarloaf cabbage that harnesses the savour of grated parmesan to tarnish the good reputation of its brassica base.

Steakhouses have a tight script and at Chophouse they leave no room for ad lib. If a daily changing menu is the restaurant equivalent of a surprise party, then a meal at Chophouse is like returning to your regular year on year. You come back because you know it and you like it. It’s a crazy world out there, so get your reliability where you can. Ideally with a side of cauliflower gratin.