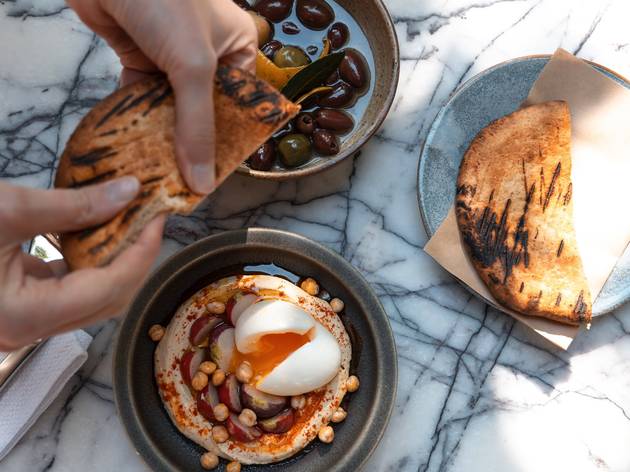 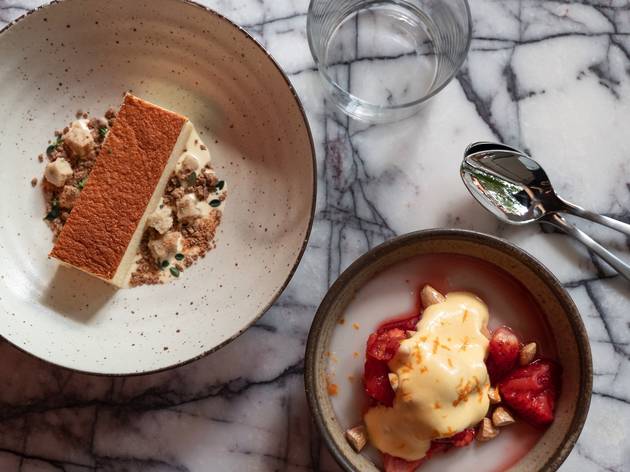 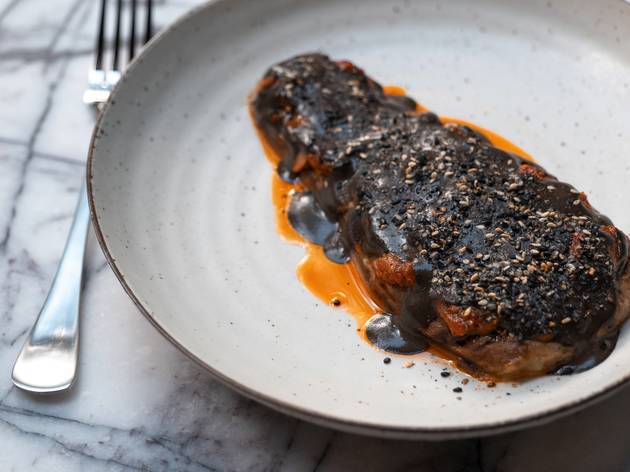 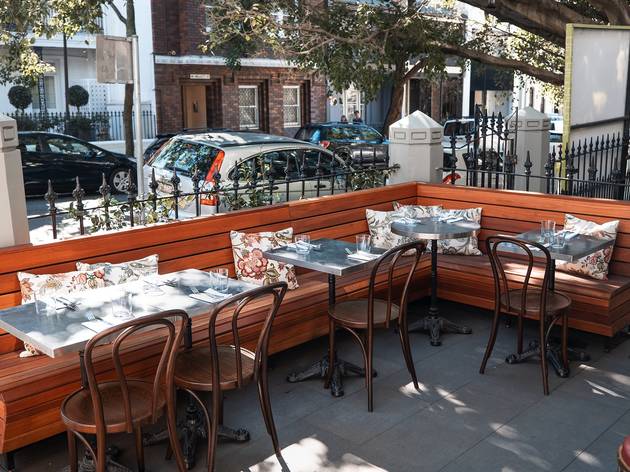 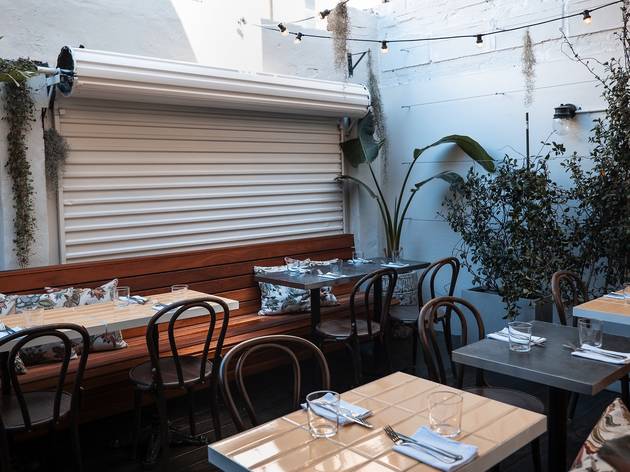 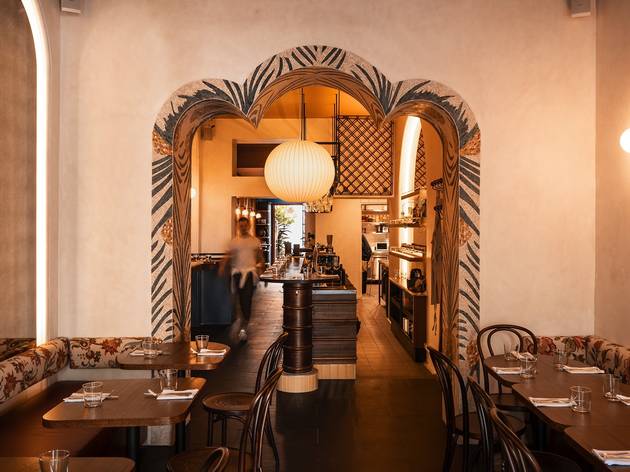 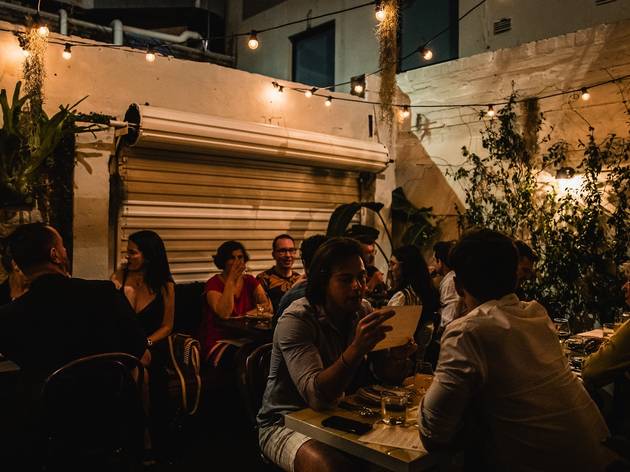 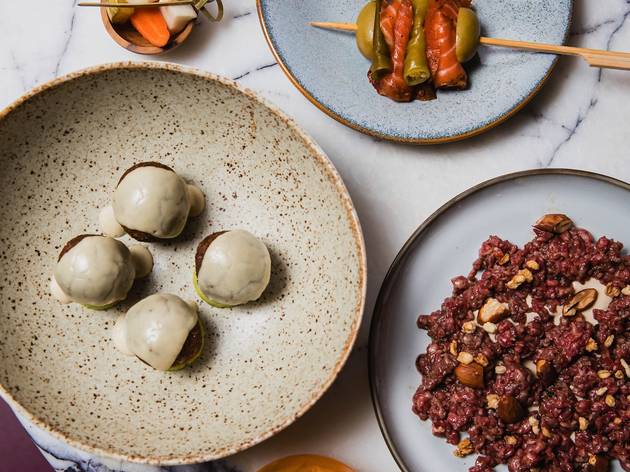 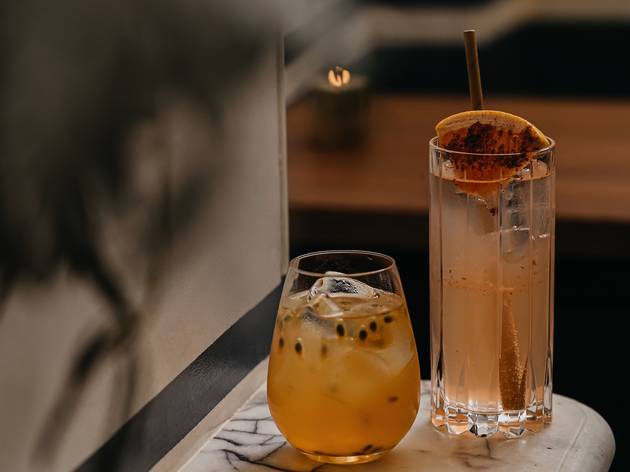 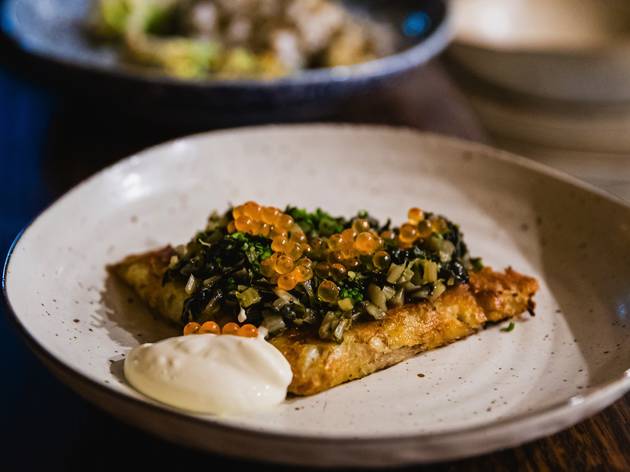 It is an area usually brimming with backpackers, but these are strange times and so Ezra has taken it upon itself to bring a little of the outside world to the heart of Potts Point. A luridly pink neon sign tells you that the little corner terrace house is not a share house or hostel, but rather a new, 90-seat restaurant importing Tel Aviv's street food culture – heavily influenced by Palestinian and other Middle Eastern countries' cuisine – to a city sorely in need of faraway adventures.

Plates, like so many in the city, are ‘designed to share’ but we’re talking smaller bites rather than big platters. Dips have a starring role on the compact menu. A spicy, sweet macadamia muhammura packed with bell peppers, pomegranate arils and chunky, roasted nuts requires fresh bread: try the bagel for a more traditionally Ashkenazi Jewish experience or pull apart some pillowy pita. Herb-packed spanner crab falafels (and the classic, vegetarian ones) are dressed to thrill in smoked-egg-topped hummus; and labne gets a wild, tart refresh with a dose of zhoug, a Yemeni hot sauce made with green chilli and fresh coriander. Love snacks on sticks? A pepper-crusted wiggle of salmon pastrami skewered between pickled peppers and green olive cheeks is a two bite palate party.

No one behind Ezra is Israeli. Rather, there’s an eclectic mix of culinary experience at the helm: Bistro Rex's Nick and Kirk Mathews-Bowden have a background in French cuisine, while Ben Sears whiled away six years making Asian fusion dishes at Paper Bird and before that was at Moon Park and Claude's. It explains why the menu veers off course from Middle Eastern flavours at times, like when a whole flounder is baked in earthy miso. The roasted cauliflower with haloumi, honey and za'atar is a crisp, light return to the stated goal, as is charcoal-grilled chicken dressed in vine leaves, topped with red grapes and served with a heady, garlicky toum. All those big flavours are balanced with a salad of cracked green wheat, fresh broadbeans, peas and mint.

Ezra's wine list is a natty-loving, modern selection with enough pinks and oranges to get you through a sweltering summer in the front courtyard. Those are the primo seats – the venue is narrow, so if you're on one of the corridor tables you'll have to eat your dishes in order of arrival – they won't all fit at once. Don’t fancy shelling out for a full bottle of Sicily’s Cos Rami? They do a 250ml serve for $41. And cocktail list is basically a global summit. Taking the floor is a Paloma with tequila, grapefruit and paprika, followed by a Spritz made with passionfruit-husk-infused cocchi, while the Ezra Gibson with pickles and brine delivers the final talking points.