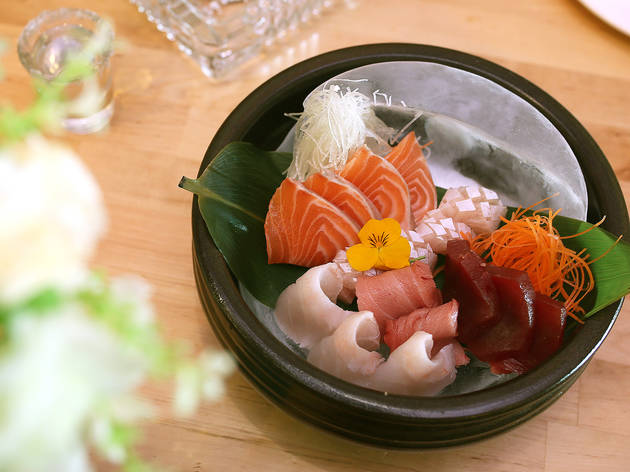 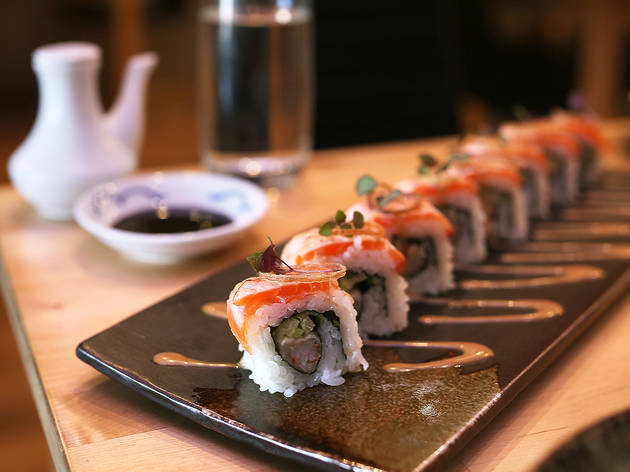 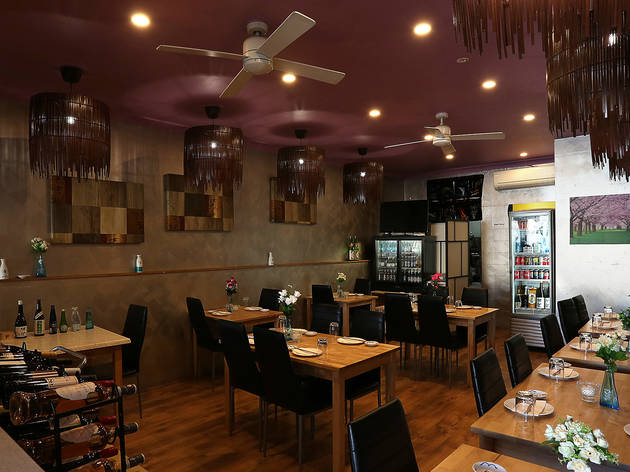 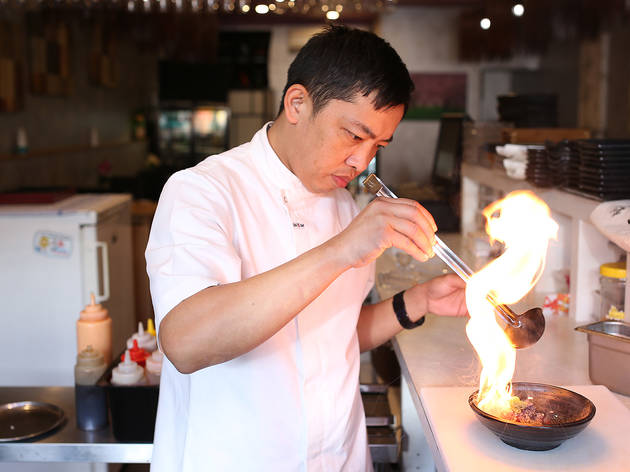 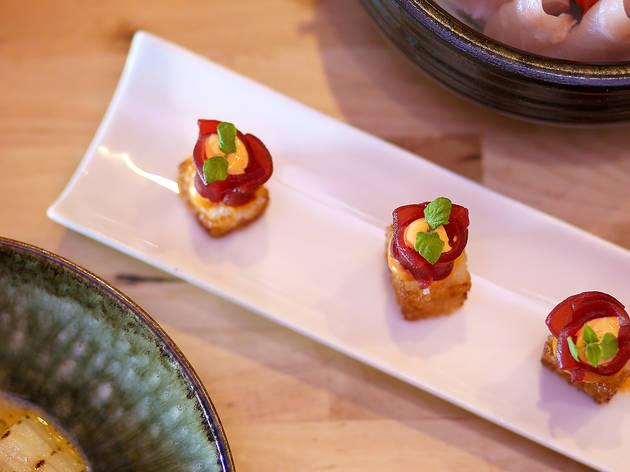 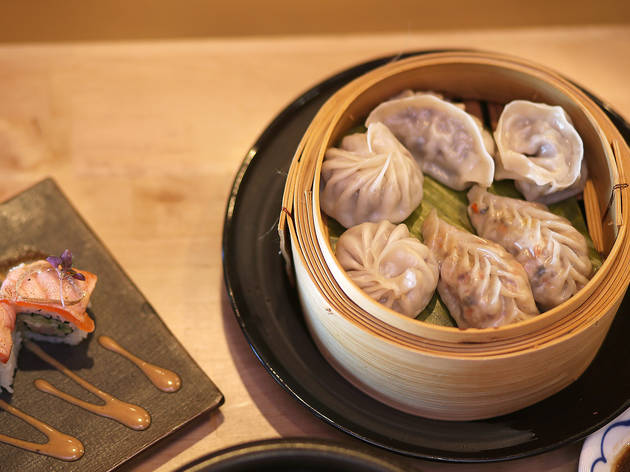 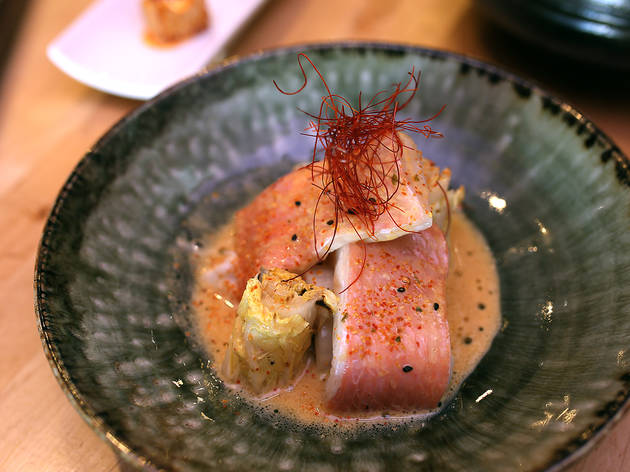 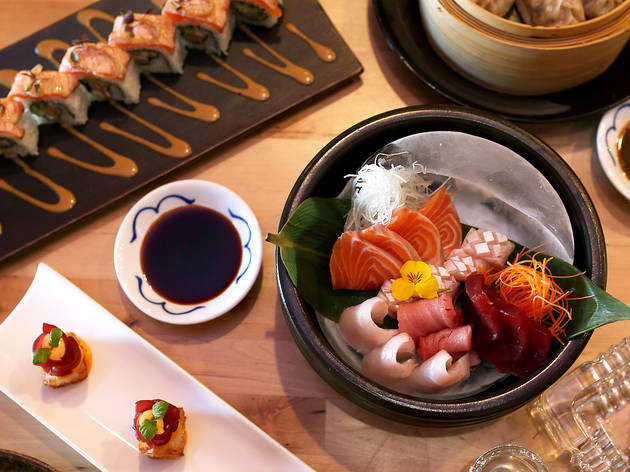 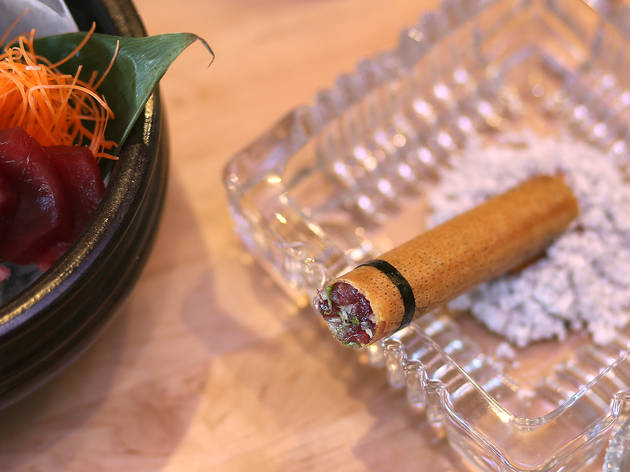 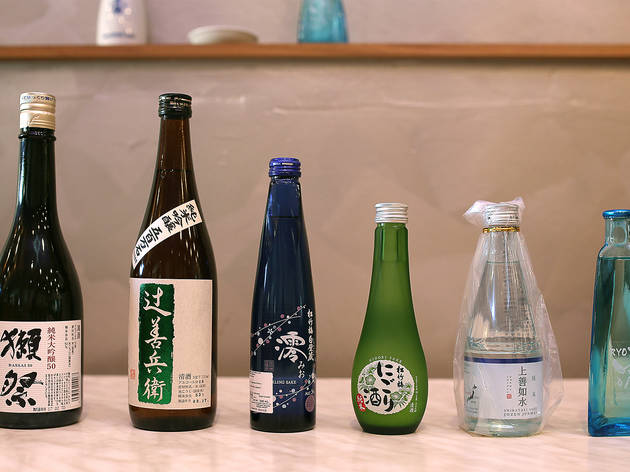 This little sushi joint on the southern fringe of Surry Hills has the makings of a winner. Chef RK Tamang has traded his time among the Sydney sushi glitterati – Soyko, Flying Fish and Saké at the Rocks, where he was executive chef – for his own little shop with a pared-back, low-key feel that’s more suburban haunt than hatted resto.

On a weeknight, Tamang is the sole chef in the open kitchen, calmly moving between the sushi bar and deep fryer, turning out elaborate maki rolls filled with fresh prawn tempura and tuna tartare. The menu is a favourites list, from nigiri, sashimi and hand rolls, to skewers over the robata grill, and a few ‘RK San Classics’.

One classic – the maguro hana – is a throwback to his Soyko days, with sashimi tuna atop deep-fried sushi rice cubes with a whack of spicy mayo, and rides heavy with that LA-style crunchy sushi vibe.

The best approach here is to order up and settle in with a bottle of sake for the wait. There’s five on offer, including a crowd pleasing Kikumasamune Kimoto Junmai ($19 for 370ml) and a sweeter, sparkling Takara number. Nearly all the wines on the list come in under $50, including a Tasmanian Cape Bernier chardonnay and a Z Wines Eden Valley riesling – hello, cheap date night.

Forget crisp-based gyoza. Here, a steamy basket of Tibetan momos will land on your table: round, plump and home style, with coarse-ground pork mince and chunky red onion at the centre, and achar, a tangy Tibetan dipping sauce, to the side. Tamang says these, along with his sashimi cigars and lamb cutlets, are a nod to “contemporary fusion”. It’s a bit off-piste but we’re running with it because momos are delicious.

There’s a generosity to the place (we spied the chef slinging a few gratis plates to ours and other tables) that makes you want to come back, despite a few niggles with the food. The smallest sashimi platter, at $21, gets you ten pieces of three kinds of fish. Our serving had 13 fat curls of salmon, tuna, kingfish, and snapper, making it easy to forgive the odd bit of sinew.

Steamed snapper is served with grilled cabbage and a buttery yuzu soy sauce, but heads up: it comes with a hit of unannounced truffle oil. It’s a big bowl of fish, cooked well, but that chilli-laced sauce steals the show, proving that butter makes everything better.

You can eat well on small coin at RK San: the tasting menu is only $30 a pop, with five courses including tempura prawns, kingfish carpaccio and seared salmon rolls. If you want to see what the chef can do, the omakase menu is $75 a head, and we bet you’ll leave clutching your stomach.

RK San’s menu hits that price point that makes it perfect for rolling up on a weeknight for snacks and sake. Hopefully, with a few more staff members on deck, RK will be able to iron out the kinks and show Cleveland Street what he is capable of.