What I learned about opening restaurants in Sydney

From spotting a mile-wide gap in Sydney’s dining market to getting electrocuted in the course of following his dream, Brody Petersen, the Canadian-born owner of the Parlour Group of venues, has had a wild run

In January of 2015, Brody Petersen, a Sydney-based restaurateur, walked into a junk shop in Long Beach, 37 kilometres south of downtown Los Angeles. Petersen and a friend were looking for items of Americana to decorate a new Sydney restaurant they planned to open, and were in the process of filling a rented truck with beer posters, artworks, knick-knacks and tchotchkes to ship back across the Pacific. An item in the store immediately caught Petersen’s eye: a big, yellow neon sign flashing a frosty beer mug, a Martini glass with an olive, and an eight ball.

Petersen loved it, so he went to unplug it, unthinkingly placing his thumb on the bent earth prong. “I electrocuted myself,” Petersen says with a laugh. “I had a numb arm for about eight hours... I got the neon sign for half price because they thought I was going to sue them. It’s such a funny memory.”

Going the extra mile to bring North American things to Sydney is one of the recurrent themes in the life of Petersen, a twinkly-eyed, dark-bearded Canadian in his thirties who owns and runs three Sydney venues: Riley Street Garage (in Woolloomooloo), the Village Inn (in Paddington) and Stanton and Co (in the Cannery building in Rosebery).

Born in Vancouver, Petersen first came to our shores as a teenager in the early 1990s when his father, who worked for Pepsi, was transferred here. He went to school at Redlands in Neutral Bay, and on graduating decided to move back to Canada under his own steam.

“I wanted to be a ski bum, a snowboard bum,” he recalls, “so I moved back to Whistler at the ripe old age of 18.” Having worked as a dish boy on Sunday nights at Beaches, a small restaurant in Balmoral under chef Hamish Ingram (Bar H), he was able to get hospitality jobs in Whistler to finance his daytime adventures on the snow, which led to a more serious gig at a restaurant in Vancouver.

Petersen’s family had remained in Sydney, however, and it was during a 2006 return visit that he had his light bulb moment. “I’d come back to Sydney to visit my friends and it was always about hanging out in an old-school pub with bright lights, shitty music, shitty food. In Vancouver, when you went out at night you’d go to a restaurant bar: a restaurant with a really cool bar on one side. I came here and saw that gap in the market.”

Petersen went back to Vancouver, packed up his life and moved back to Sydney. Just nine months later he opened his first restaurant bar, the Flying Squirrel on Bondi Road. It was an immediate hit. He was 25.

“People wanted small, intimate places where you can drink and have food. It was easy to run, I didn’t have many staff, the rent was cheap, and it worked.” The review in Time Out’s 2009 Bar Guide advised aspiring Flying Squirrel customers to “look for the sign/lightbox filled with sand and the remains of unloved Barbie dolls”. Petersen’s love of quirky design touches had arrived. “I had stuff everywhere, and people came in just to look around. It was just so different.”

He subsequently opened the Stuffed Beaver in Bondi, but by 2013 he realised that if he wanted to make a career out of restaurants they would have to be big ones. And that was when the opportunity to buy an Art Deco former automotive garage in Woolloomooloo came along. Following a $2 million renovation, Riley Street Garage emerged as a 200-seat Japanese-accented restaurant inspired by New York’s Meatpacking District.

“When we first opened Riley Street we had a lady came in, she was probably in her early seventies. Her dad used to work in the garage in the ’30s and she brought me a staff photo dating back to the ’40s. I’ve got it on the wall of the restaurant, along with some of the original photos of the building delivered by this lady.”

There’s a similar story about Stanton and Co, Petersen’s Rosebery 120 seater named after a turn-of-the-century developer, Richard Stanton, who left his mark on the suburb. Stanton’s grandson heard about the Modern Australian restaurant and drove down from the Hunter Valley to lend Peterson a stack of Stanton Sr’s vintage sales brochures and posters that the delighted restaurateur had framed and hung around the restaurant.

Petersen says that his three hospitality pillars are Product, Service and Atmosphere. “Those are always front of mind for our whole team. How can we make the atmosphere better? Is the right music playing? Is the lighting right? When you come to one of our venues, we want it to be an experience.”

1. Have a nice, big, friendly bar in your restaurant.
“We always said we’d rather our guests feel like they are eating in a bar atmosphere rather than drinking in a restaurant. Crank up the music, dim the lights and have a bit of fun. We want people to think that you can come and just hang out.”

2. Waiters are sales makers, not order takers.
“This is where I try to bring my North American experience. You’ve gotta give people good service. I don’t think there is such a thing as over serving. Make sure you talk to your guests. Make sure everything is good and if it’s not, fix it.”

3. Starting out? Take over an existing venue.
“Make sure the place already has a kitchen, all the plumbing. Otherwise you could be spending half a million before you even start.”

4. Listen to what your customers want and be flexible.
“We tried going a bit fancy with the food at the Village Inn but the demographic didn’t like it. They like a good schnitty. So now we focus on quality pub meals done by a chef, not a cook. At Stanton and Co we originally had just an à la carte, two-hour sit-down lunch menu but we brought in a Bowls and Buns lunchtime menu for the local workers – burgers, ramen or poke for $15 to $18 bucks, and you still get table service.”

5. Venue design is key.
“I like exposing all the natural features of a building – brick, timber and steel. Creating beautiful interiors and watching people go ‘wow’ – that’s a good feeling. A lot of restaurateurs might say ‘put tables everywhere’. No – you’ve got to create sections, walkways, little areas.”

More about the Parlour Group... 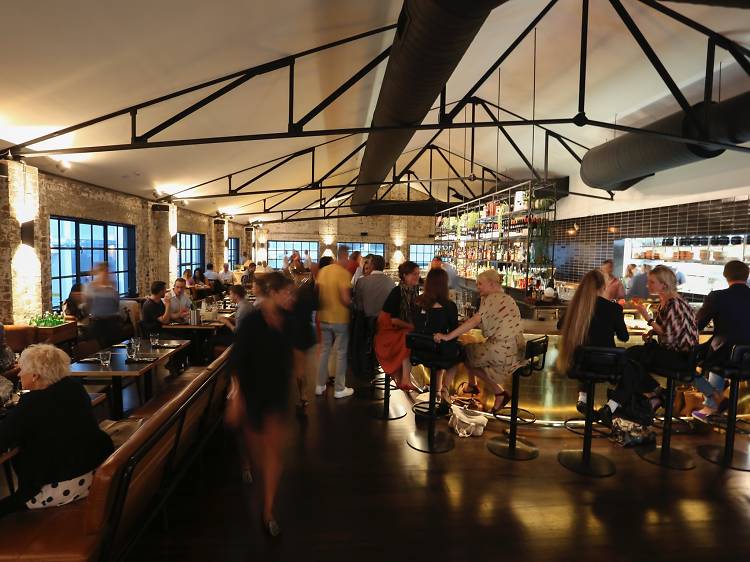 Three Sydney restaurants ideal for your next group get together