Vax and the City: how sex, love and intimacy feel different now

As the world emerges from lockdown, people want all the sex, none of the sex or a wildly oscillating mixture of the two

Now that Aunt ‘Rona is apparently here to stay, the more intimate facets of our lives may have been changed for good. Ever since that ill-fated, unexpected guest unpacked its bags and got settled, the ways we explore love and lust now come with added limiting factors, regardless of whether you’re living in close quarters with an intimate partner, in a relationship with someone you can’t physically see, or you’re navigating (or avoiding) the dating scene.

Certified sex coach Georgia Grace, who is also part of the team behind Aussie sexual wellness brand Normal, has noticed three distinct camps emerge in the libido stakes. There are those who are using the change in schedules and time indoors to board the caboose of the sex-centric steam train all the way to pound town, using all the extra time to get physical with their partners or burn out the batteries on their toys. There is also the complete opposite of that: “Others have just felt so completely stressed out and overwhelmed that sex is the furthest thing from their mind right now. They don't want to engage with it. They don't want to touch themselves. They don't want to have sex with others,” Grace explains. The third group, have a foot in each of the first two camps: “Lots of people, they're identifying that their libido is up and down. One minute, they're really, really aroused and really turned on and thinking about sex. And then the next moment they're not at all.”

When we looked at how love, lust and romance had changed under iso in June 2020, as Sydney was tentatively re-emerging from its first lockdown, we found that there was a plethora of new obstacles and issues on the table when it came to online dating. Now, as Sydney and Melbourne size up the promise that we’ll soon be out of our final lockdowns, there are myriad new considerations and interferences when it comes to sussing out intimacy. The game-changing Delta variant and Australia’s scrambling vaccine rollout has put the jab front of mind for pretty much everyone, both in the streets and between the sheets. 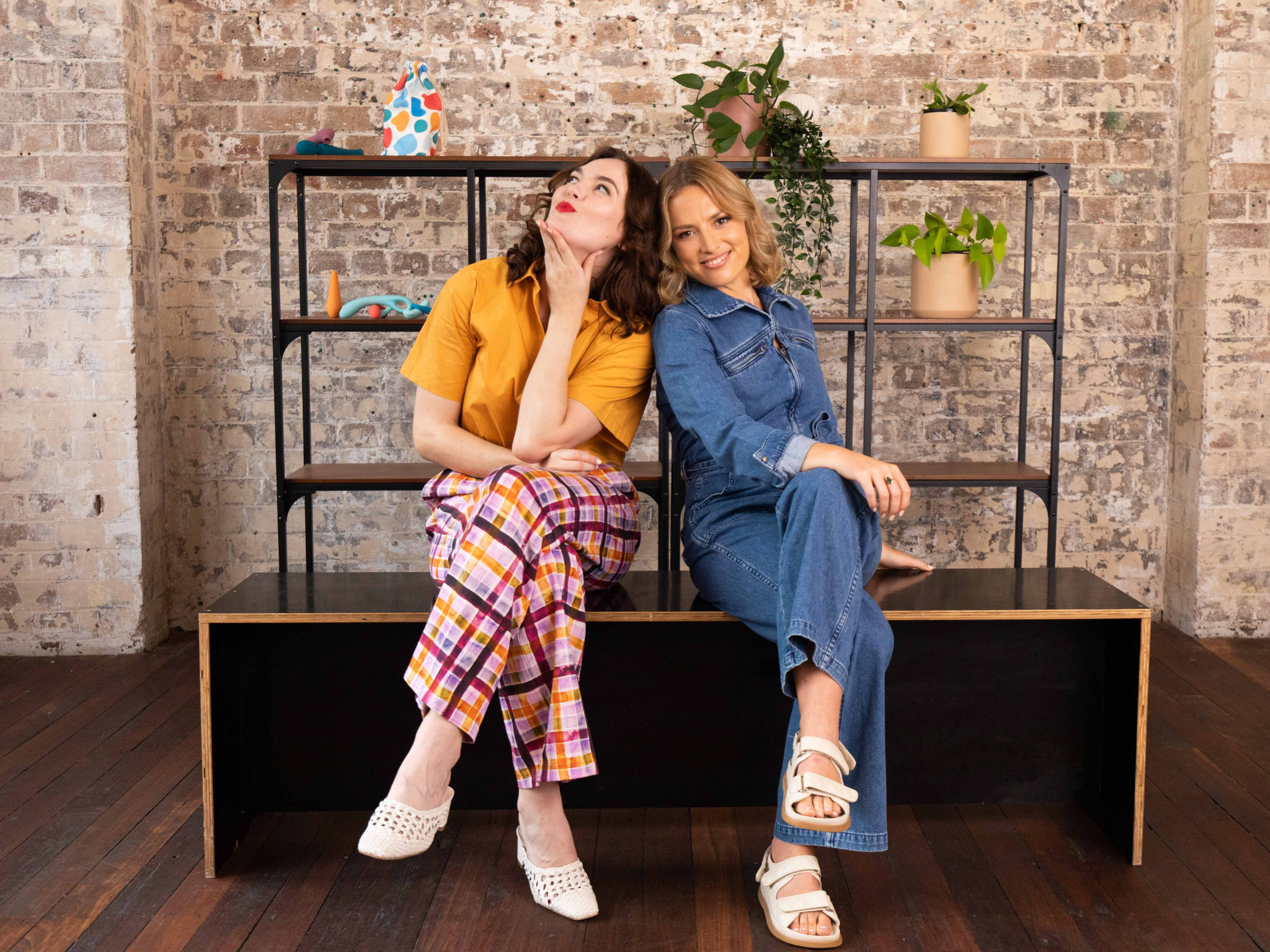 “Certainly everything about us and our sexuality and relationships and how we date is informed by things around us. [Vaccination], it’s political, it’s social, and it’s cultural to be speaking about it,” says Grace. “It does shape perspectives and opinions on others. If you are adamantly anti-vaccine and you're not getting vaccinated, then a lot of people perhaps will be quite nervous to go on a date and to be exposed."

Three of Australia’s major dating apps, Tinder, Hinge and Bumble, are prompting users to display their vaccination status and preferences upfront with ‘stickers’ or ‘badges’ on their profile. This follows suit with the practice in other countries where Covid vaccines have been more accessible and front of mind for longer. Papri Dev, the senior director of APAC communications at Tinder says: “Vaccinations have become a popular talking point on Tinder, and mentions of ‘vaccine’ in member bios in Australia increased by 220 per cent between January and July 2021, and an additional 30 per cent between June and July – this is a new all-time high”.

Bumble, the women-first dating app, started rolling out a ‘vaccinated’ badge in Australia and New Zealand in July, after reporting a 45 per cent increase in users asking potential dates if they have had the vaccine or have Covid symptoms. Hinge found that 58 per cent of Aussie users say the Delta variant has affected their sex life, with almost half of users also indicating they were less likely to have one-night stands now. Hinge also notes that almost half of its users are keen to try new things in the bedroom this summer, and 34 per cent have developed a new sexual fantasy. Each of the apps has also collected data that shows that within the last year, users have been talking to matches for longer before meeting up and waiting longer to have sex.

We don't need to feel sexy to survive, but it's really fucking nice.

While exercising some caution and safety protocols when navigating dating is a sensible thing, especially in a world where a highly transmissible virus is lurking, Grace has also found that low sexual self-confidence, or a lost sense of “pizazz for life”, has crept up on people of all genders and orientations who have spent a lot of the past two years not really feeling like themselves.

“When I speak to people, they identify that going out, meeting new people, whether that is on a date, or whether that's just being at a bar with new people having those random conversations – maybe it's flirty, maybe it's not – but that is a huge part of them feeling alive, feeling human, and feeling like themselves. Because they haven't had access to that for the past two years, on and off, they've really lost a sense of sexual self-confidence, or they've lost that skill that is dating and is flirting. That takes time to refine and to practice."

This yearning for connection has also been identified by Jenna Love, an independent Blue Mountains-based sex worker who was forced to pivot her business online during lockdowns. Her virtual girlfriend service, which is more platonic in nature than sexual, has been her most popular new offering. Clients will pay to text with her for an afternoon, a day, or a week. They’ll talk about how they’re feeling, what TV shows they’re watching, they’ll also exchange non-explicit photos. Love says: “The fact that that has been a popular service, I think is quite telling about what people's needs are during this time. For sex workers, sex is in the title, it's a part of the job. But really, I think what the job is, it’s about creating human intimacy and connections, allowing people to feel seen, to feel valued, and to feel desired.”

Love adds: “I think that sex and intimacy are beautiful and crucial to having a happy, healthy life. I think some people will say ‘Oh, well, sex is not a need, you can survive without it.’ Sure. But I don't know if you can survive without human connection. And we don't need to feel sexy to survive, but it's really fucking nice.”

Grace adds: “I can imagine as we move back into the world, there will of course be excitement to be there and to be able to move more freely. But there will also be stress, and there'll be anxiety, and there'll be a period of time where people are needing to really practice these skills that they've maybe not had the chance to use for the past few years.”

As we emerge from lockdown, double-jabbed and ready for the new normal, it’s like everyone is starting to step back out as they detangle themselves from an expired long-term relationship, rediscovering their confidence and awkwardly trying on social scenarios they haven’t participated in for some time. But that crappy ex-partner is a pandemic, and everyone else dated the same guy. So you have a mutual connection, but you also have the same cloud hanging over you. Be gentle with each other, and yourselves, as you start to feel the sun on your face again.

Georgia Grace and Jenna Love are both speaking at Sextember, a totally free virtual festival about sex, intimacy and relationships. Find out more here.

You can follow Georgia Grace on Instagram at @gspot._. If you’re interested in more direction on navigating sex with others, check out The Modern Guide to Sex ($29) an online sex-ed course from Georgia Grace and Normal, which includes a workbook of practical exercises. If you’re playing solo, check out Georgia’s book The Pleasure Journal ($35) a colourful, illustrated diary about sexual wellness and orgasmic potential for vulva owners.

You can find out more about Jenna Love at jennalove.net. You can find Love’s podcast with Holly Harte, Somebody You Love, a show that aims to demystify sex work and give a human voice to sex workers, on most platforms where you listen to podcasts. You can find the pod on socials at @somebodyyoupod.