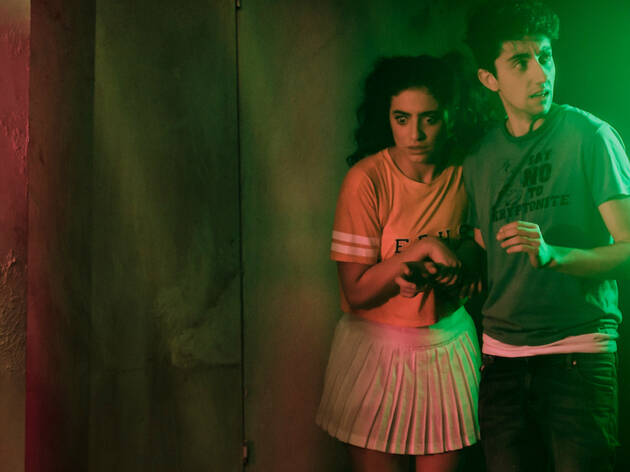 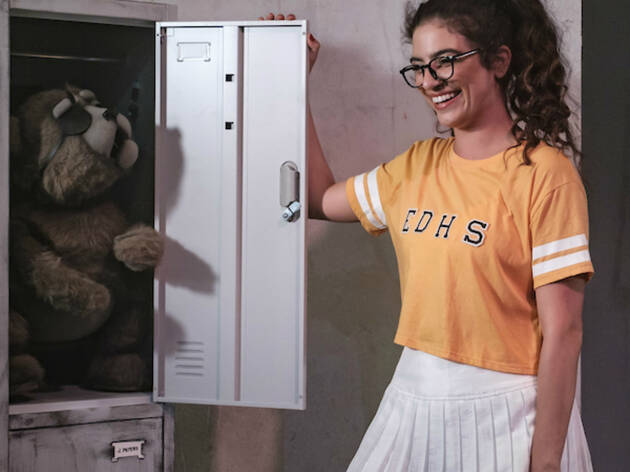 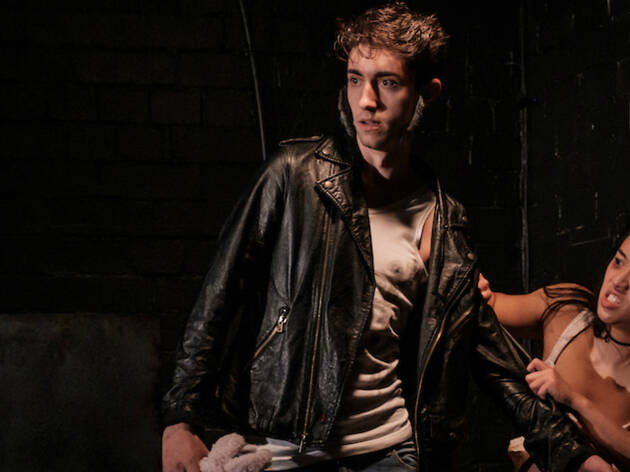 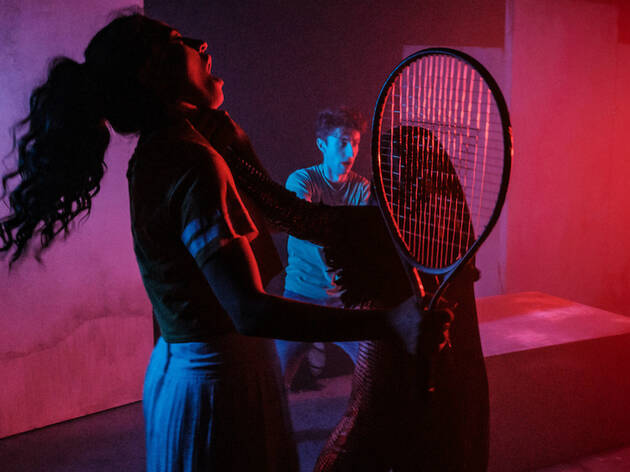 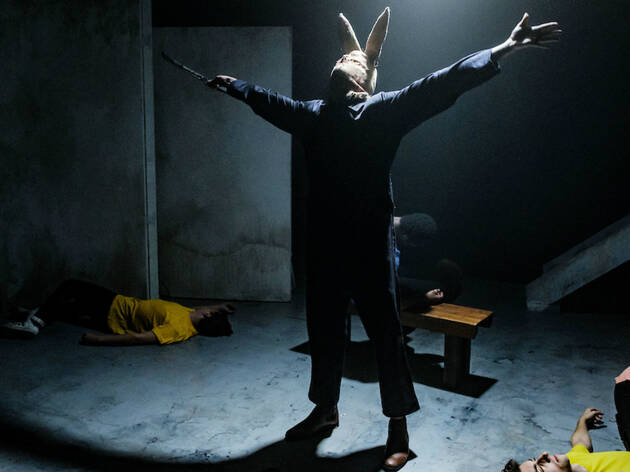 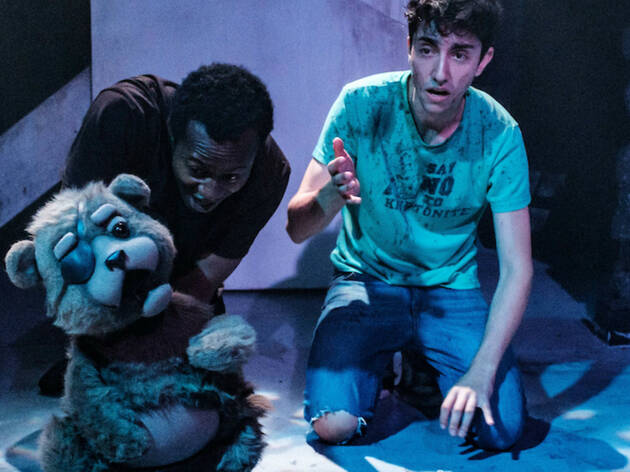 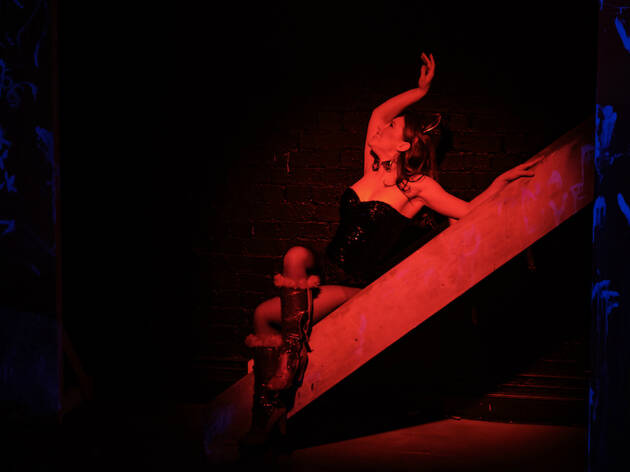 This blood-splattered comedy is miles from Wonderland

Uncover your eyes for Qui Nguyen’s American high school slasher comedy Alice in Slasherland, a wacky crossover where the dark witticisms of Heathers meet the tacky underworld monstrosities of Buffy the Vampire Slayer. With badass teens fighting demons wielding bladed tools and donning bunny heads, there’s much to lap up in this campy and gorily fun production that feels fresh and fiery as hell.

But before the pits of hell are quite literally unleashed, there’s just a normal teenage boy – Lewis (Bardiya McKinnon) – making bad internet vlogs, declaring his love for his cheerleader best friend, Margaret (Mia Morrissey). Of course, anyone who’s seen any type of teen rom-com starring an awkward adolescent knows this confession doesn’t play out so smoothly – especially when he’s pigeon-holed as the highschool geek. What perhaps isn’t as predictable is for a quasi-apocalypse to manifest itself in the form of a groaning, laconic Alice (Stella Ye) – a slain schoolgirl who emerges from the dead. This end-of-the-world situation soon spirals into an action-adventure quest that calls on Lewis, Margaret, Alice and a Teddy Bear (puppeteered and acted by Justin Amankwah) to find a way to close the rift between Los Angeles and the Hades underworld, all the while trying to not be eaten up by demons dressed up in some pretty grotesque morphsuits. So, you know, just your typical school week.

Nguyen, whose play premiered in New York in 2010 and now makes its Australian premiere, writes with lively wit infused with Gen Y and millennial pop-culture references (sly Wolverine and Sailor Moon cosplay costumes are a nice touch from costume designer Kate Beere), and he taps right into teen speak that’s both authentic and funny. There’s also plenty to rollick over for slasher fans too, though it’s without the actual fear factor; the show instead opts for a more satirical approach to the genre with its light-hearted jabs at the film genre's clichés.

Director Rachel Kerry takes heed to Nguyen’s innovative script and injects an unabashed extravagance that stretches the boundaries of the tight space granted by the Old Fitz theatre. This is a production that pulls no punches, with fake blood splurging out in the most ridiculous moments (front row-ers, you have been warned); kickass hand-to-hand combat sequences (choreographed by Nigel Poulton) meticulous enough not to come off too cheap or perhaps more importantly, too realistic; and hammy musical numbers – one set to Bonnie Tyler’s ‘Total Eclipse of the Heart’ is a playful nod at the killing spree montage.

This indie production’s relatively low budget is key to making this play all the more endearing because of the very silly conventions of B-grade horrors it borrows from – ones that horror fans have laughed at, been scared shitless by and loved over time. Though the sound levels of the bloody killing screams can become a bit overbearing, and the story often takes second-place to its gimmicky, showy theatrics, the production’s design elements more admirably embrace the play’s loopy world and all its infernal absurdities. Lauren Peters’ panel set design keeps things stylishly mobile, moving scenes easily between school locker rooms to teen bedrooms; and Benjamin Brockman’s lighting design is appropriately lurid with brightly coloured hues that drench the stage with gorish overindulgence.

The cast keep the energy terrifically high, with both McKinnon and Morrissey superb as the lead protagonists, and Laura Murphy switching between Tina, the mega horny high school stereotype and Lucifer/Lucy with a gleeful twinkle in her eye. Ye is less convincing as Alice despite her impressive fight movements, but that could be attributed to her underwritten character that doesn’t nearly spend enough time figuring out her very real internal demonic conflict. Amankwah steals the show here though: his foul-mouthed “I’m a fucking talking Teddy Bear” Edgar is a sassy, brazen sidekick – and he embeds this stuffed animal with so much personality that it feels like it could have inspired Seth Macfarlane’s Ted.

Besides a few self-referential lines, Nguyen’s play doesn’t exactly inch close to resembling Lewis Carroll’s Alice in Wonderland in any sense, but Red Line Productions’ show never tries to be anything close to ultra-serious, and that’s why it works. This is a rambunctiously good time. You could even call it a scream.