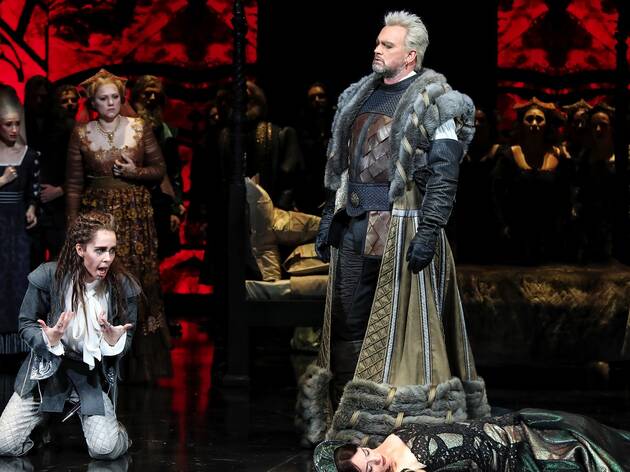 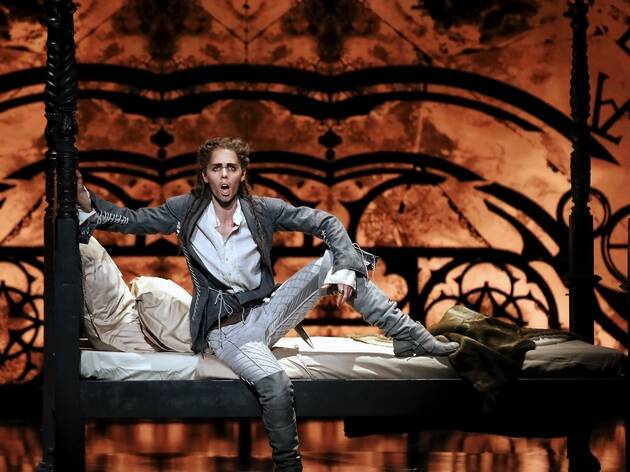 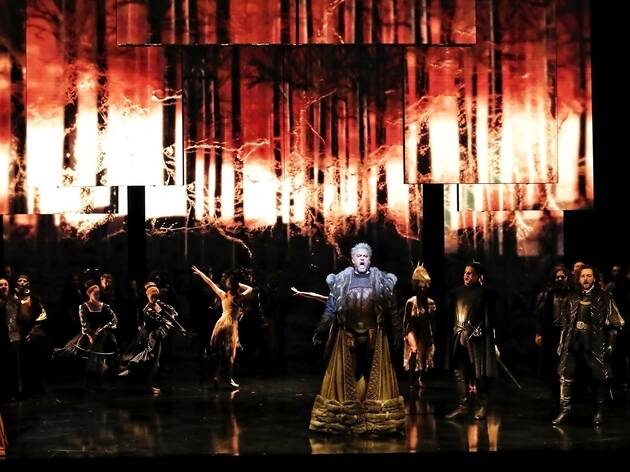 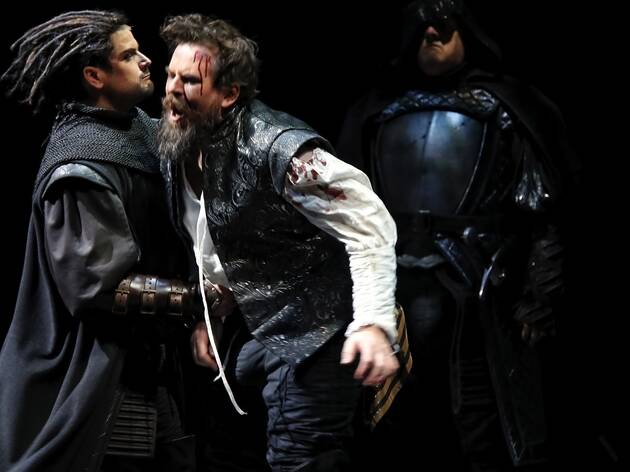 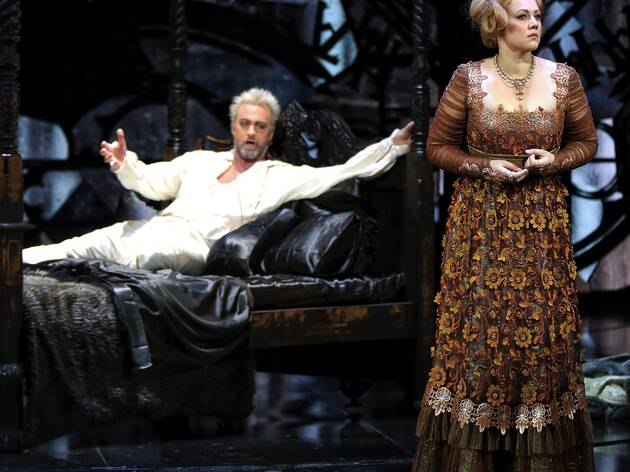 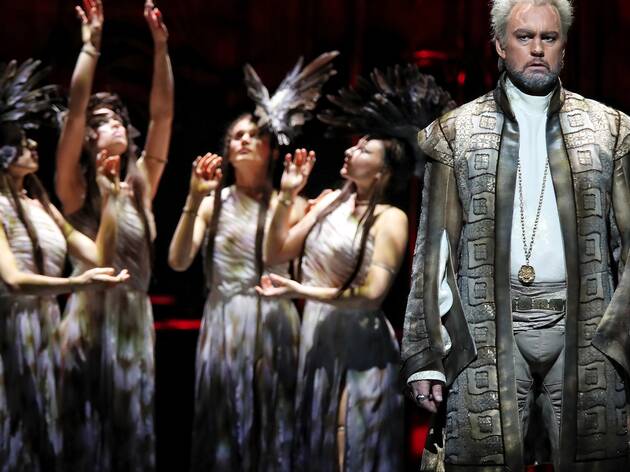 At first it seems an incongruous pairing: Donizetti’s elegant historical tragedy about the downfall of Anne Boleyn at the hands of King Henry VIII, and a tech-heavy digital production using 12 high-definition LED panels as sets. This is Opera Australia’s big gamble on the future of opera, and their third production using the technology. Surprisingly, it’s quite a seamless melding of mediums, bringing a piece from almost two centuries ago into our digital age.

Director Davide Livermore, whose bombastic production of Aida was utterly thrilling, this time matches the elegance of the music in a bold, visually striking but mostly sensitive production.

We say mostly sensitive because it gets off to an inauspicious start: as the overture begins, the curtain opens on a misty video of London’s ‘Gherkin’ building. A young woman dressed in a Tudor-inspired punk outfit struts to the front of the stage, taking a selfie in front of the landmark. We then see the tower being deconstructed, followed by the London Tower Bridge and a series of symbols of British wealth and power. The idea is interesting as it takes us back to the time of Boleyn, but leaning into the “millennial bimbo” stereotype is in bad taste and completely unnecessary in an artform that’s already so dominated by men.

Once we’re past that significant misstep and into the world of Henry’s court, this production is a delight right to its final moments, as Henry (Teddy Tahu Rhodes) plots to remove his wife Anna (Ermonela Jaho) from the throne and replace her with her own lady-in-waiting, Jane Seymour (Carmen Topciu). Its success is thanks in large part to Albanian soprano Ermonela Jaho, who brings extraordinary fire to Anna while tackling all the bel canto coloratura arias with accuracy and a sparkling upper register. It’s exciting when she really lets loose, but the greatest pleasure in her performance is when she holds back and employs an impossibly delicate, light edge to scale the heights of Donizetti’s score. It’s some of the best singing we’ve heard on the Joan Sutherland stage in recent years.

She’s well-matched by Topciu, who deploys her lusty, well-rounded mezzo to strong effect as she watches the horrors that Anna suffers unfold. Their second act duet, when Jane visits Anna in prison, is entirely engrossing.

While these two women shine brightest, there’s decent support from Leonardo Cortellazzi, who sings with great agility as Jane’s former flame Lord Percy, and Rhodes, who might lack some nuance but brings plenty of power and terror to Henry. Anna Dowsley, a mezzo who specialises in “pants roles”, brings an appropriate swagger to Anna’s lovesick suitor, Mark Smeaton.

Conductor Renato Palumbo drives the Opera Australia orchestra through the three-hour score at a fast pace but allows each of the singers their moment in the spotlight, while the chorus sing and act their hearts out as the members of the court who are devastated by Anna’s destruction.

It turns out the screens – which spin, fly in and out, and move slowly across the stage – are the perfect backdrop for the type of opera in which the action frequently halts to allow a singer a moment to show off. The imagery (set design is credited to Italian collective Giò Forma) conjures up courtly scenes without ever being too literal, using slowly evolving and warped historical images, complete with some scurrying black beetles. The screens allow Livermore and his designers to track the mood and texture of the music with colour and tone in a way that enhances its emotional impact.

Mariana Fracasso’s costumes are the other key visual element and they don’t disappoint, mixing Tudor period fashions with a contemporary, rock’n’roll edge. The gowns for Anna are all absolutely stunning, and there’s a brilliant reveal that would make any RuPaul’s Drag Race contestant proud.

John Rayment’s lighting is moody and unobtrusive, but there were a few problems with missed spotlights on opening night. But it’s hard to be too disappointed when Jaho is letting rip in this massive role, such a perfect fit for her you could be fooled into believing it was written specifically for her talents. This is the type of performance you always hope to see at the opera, and the standing ovation she received at the opening performance was entirely deserved.