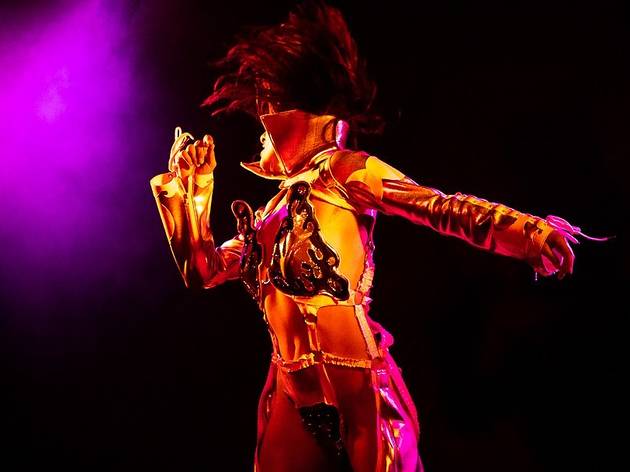 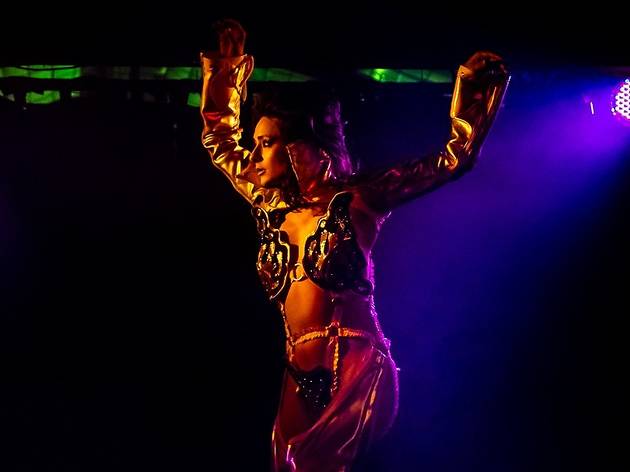 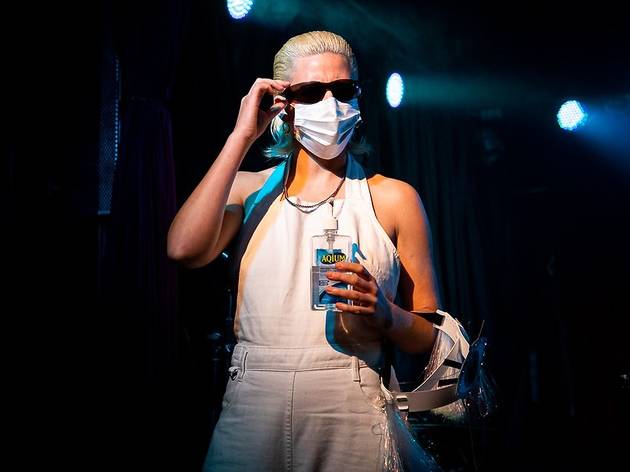 Funny, filthy, deeply felt, unapologetic, full-frontal. Sex clown Betty Grumble is up to all her usual shock and awe tricks in the world premiere of her latest (strictly 18+) show, Enemies of Grooviness Eat Shit.

If you’ve seen her previous one-woman show, or womanifesto, Love and Anger (or Sex Clown Saves the World Again!) you might wonder if she has anything left to bare. Where do you go after opening a show with vagina puppetry before excavating wells of personal grief, and summing up with a call to arms to save mother earth? In this new marathon theatre experience, she takes her driving force as an artist to new, unignorable levels.

“When the reviewers say this show is a big wank, they won’t be wrong,” she says at one point, and she means it quite literally.

Shock tactics and nudity are common tropes for her performances, but in this show she strips away any remaining sense of the demure and placative. The woman behind the big stage persona, Emma Maye, becomes less opaque. You could say that appearing on stage without her signature, humongous blonde matted wig and face paint (the latter to be added during the show via audience-interaction) is just as, if not moreso, exposing than the lewd-ity.

So much of performance, art and entertainment alludes to sex and pleasure, and so much of that is catered to the male gaze. In performing her own unfiltered pleasure, Betty reclaims her sexuality and her body for herself, and for all people who have had their bodies weaponised against them. This is an important development in the throughline of the show, in which she exhumes a personal journey with intimate partner violence and the hostile nature of the adversarial court system. Enemies of Grooviness is also part heartfelt tribute to a lost friend, spoken word artist and activist Candy Royalle. Through a series of performance art rites, she reclaims pleasure and joy as a pathway to catharsis, and parallels the personal with the political.

For those who’ve boarded the groove train before and who follow Betty’s work, there are nods to previous acts, familiar mantras that mesh warmly with new ones. If you’re unacquainted with the Grumble, you’ll still have plenty to get from it – if you’re open to one-woman shows that involve full-frontal nudity and body paint, that is.

There are flashes of elation, and elongated moments of endurance where she dares you to sit with discomfort. She dares you to stare her in the nethers, both bare naked before you and supersized and bannerized in artwork that echoes the “pussy prints” that have become synonymous with her art.

In the series of vignettes she demonstrates on stage, she provides a framework for healing, self care and self love. The brazen and scandalising are central to Betty’s craft, but it is the meaning and healing she attaches to all the naked dancing, labia-bearing, ‘shit’-smearing antics that have garnered her a following. And it is her self-awareness that maintains her currency. She acknowledges her privileges as a white, educated, cisgender woman, and she makes her show a welcoming place for people of a range of gender identities and sexual persuasions.

She also acknowledges the privilege we have to congregate in the theatre. The time and place in which we are witnessing the show is a context of its own. Enemies of Grooviness opened a few months after Sydney opened back up and we tentatively began to explore the new normal of theatregoing. Melbourne began to step out of a prolonged lockdown two days after the first show and the reopening of its arts venues are still a distant promise. The Red Rattler Theatre, in which the show is staged, would usually be hosting raves and big queer dance parties between gigs, poetry circles and shows like Betty’s, but that kind of revellry is not allowed right now.

You can tell that a village that has assembled to actualise this show, this experience. Betty’s longrunning lighting designer Alex Torney was in the booth, creating depth and dimension on the lightly dressed stage through light and sound design. Dance music pioneers stereogamous teamed up with Betty on the immersive sound design. Friend and collaborator Megana Holiday (aka moustachioed king Craig Slist) is part stage manager, part co-performer. Local ethical clothing label Haus of Hellmutti produced Betty’s enviable costume, all chaps and straps and silver flames. The list of collaborators goes on, see the zine-like program (collaged personally by Betty, naturally).

While Love and Anger seethed with rage and grief, Enemies of Grooviness leans more into the healing of personal and collective wounds, into hope, and into togetherness. There is still grief there, and it is raw, but it is softer, it is being let go – and this is important, because progress cannot be made on the force of blind rage alone. As well as calling out the shiteaters in this world and the systems that protect them, we must also acknowledge (and eat) our own shit too – as Betty very viscerally demonstrates in one act. Enemies of Grooviness may be confronting but it rewards you for that passing discomfort, and for those willing to brave that challenge, it might just be the baptism of fire 2020 needs.

Enemies of Grooviness Eat Shit, produced by Performing Lines, is playing at the Red Rattler Theatre, Marrickville, until November 5. Tickets are currently sold out, but you can join the waiting list here.