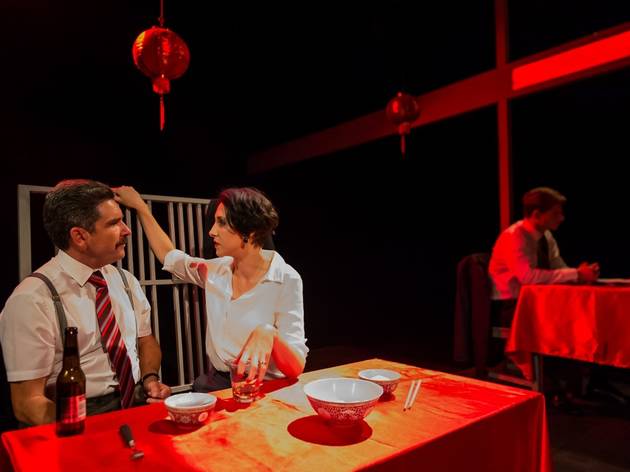 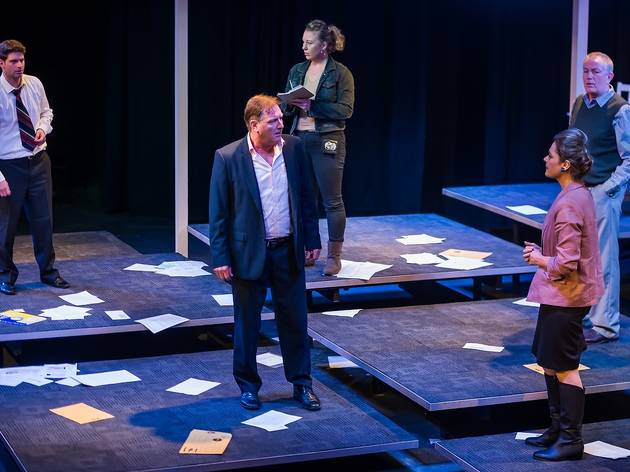 Skewering the savagery of real estate agents who'll do anything to seal the deal, this new staging of the classic confronts

David Mamet wrote Pulitzer-winning Glengarry Glen Ross in 1983, satirising the cutthroat world of real estate sales and the toxic masculinity that fuels it. Taking place over two days, it primarily follows two salesmen, past-it former gun Shelley Levene and his young protégé, Ricky Roma, who is the firm's top closer. The stakes are thrown into stark relief when company man Blake (made famous by Alec Baldwin in the film) is sent from head office with hot new leads and a clear directive: the top man on the board gets a Cadillac, the bottom gets the boot. It became a cultural touchstone for a distinctly 1980s flavour of machismo, filled with angry men in power suits, obscene language (it’s jokingly called Death of a Fuckin’ Salesman) and little regard for empathy.

The 1992 film is like the Vanity Fair Oscars party for sheer star power. Jack Lemmon played Levene, with Al Pacino, scenery-chewing as always, as Roma (he gained an Oscar nod for Best Supporting Actor but lost to Gene Hackman that year, instead picking up the Best Actor gong for Scent of a Woman). Ed Harris and Alan Arkin also appeared as disgruntled salesmen who plan a ham-fisted office robbery to get their hands on the new leads, with Jonathan Pryce as Roma's milquetoast mark and Kevin Spacey as office manager Williamson, who is stingy with the new leads but not opposed to a spot of bribery to part with them for the right salesman and the right price.

And yes, we do mean salesmen. Misogyny, racism and homophobia are part and parcel of the mid-1980s booze and testosterone-fuelled world these men inhabit, and in 1983 its casual application of the same might not have been quite as disquieting as it is now. This production of Glengarry Glen Ross, staged at New Theatre, takes the bold step of casting three women among the cast: Caroline Levien as Williamson, Hannah Raven in the Ed Harris role of Moss, and Meg Shooter as the detective interviewing the salesmen about the office robbery.

New Theatre artistic director Louise Fischer, who also directs this production, says she decided to gender-swap some characters to emphasise the play's gender politics. “I wanted to revisit this classic through a new prism, to underscore that it’s still relevant today,” she says. “In the play, the real estate agents are the great seducers; clinching the deal provides a similar euphoria to making a sexual conquest. I wanted to push this metaphor further. There have been productions that cast all the characters as women, but I felt that a gender mix would be far more challenging and create a sexual tension which, we have discovered, is actually present in the text.”

"The presence of women in this world of balls-to-the-wall masculinity changes the dynamics, perhaps more than audiences will be comfortable with"

While it's certainly the case that gender politics and misogyny are present in the text, the presence of women in this world of balls-to-the-wall masculinity changes the dynamics, perhaps more than audiences will be comfortable with. Although they retain their first names and are given male pronouns, costume designer Claudia Lafoy has chosen red lipstick, nail polish and clothing that would make sense in a 2021 professional context, but has no reference point in 1983. This look, and some deliberately provocative staging, make them look like women playing women, not women playing men. And when Roma calls Williamson a 'stupid fucking cunt' and asks her 'how many dicks did you have to suck to get this job', well, it lands very differently than the way Mamet envisioned when he wrote the role for a man.

Levien, as Williamson, handles the insults and misogyny with an exasperated tough-it-out attitude that would not be foreign to many women in male-dominated environments today. Her performance is measured and nuanced, managing to walk the tightrope between being forced, through professional roles, personality and now gender, to accept abuse as part of her job while also having the upper hand as the keeper of the sought-after leads. She also nails the American accent, though in this production the cast are going for New York, not the play's actual setting of Chicago. This is also the case in the film version, though one suspects that was less an artistic choice and more a result of the immovable force of Pacino's natural Bronx inflection.

"The filmed version looms large over every single production of the play, and the New York accents almost force the audience into a point-by-point comparison"

The filmed version looms large over every single production of the play, and the New York accents almost force the audience into a point-by-point comparison. Although Mark Langham inhabits the role of Levene with more self-doubt and meekness than Lemmon brought, it's very difficult not to compare Oliver Burton’s Roma to Pacino’s. It’s not an impression, certainly, but the film seems to be front of mind here. That's both a blessing and a curse. Every member of the cast absolutely excels at the rat-a-tat dialogue, talking over, to and through each other seamlessly. They are often in motion, standing, sitting, passing each other, climbing steps and changing direction. The frenetic energy perfectly captures the world of a 1980s real estate office, where hustling hard is the only way to live.

Tom Bannerman’s stepped set design helps, changing from a seedy, alcohol-soaked Chinese restaurant to the ransacked office in a few instants. Michael Schell’s lighting also plays a big part, with the neon red of sex, power and dirty deals in the restaurant at night becoming the almost literal cold light of day when the sun comes up on the messy aftermath.

There’s a lot to like about this production, though the introduced elements of gender politics brought about by diverse casting are perhaps more jarring than they need to be. Although comparisons to the film are inevitable, the actors absolutely nail the whirlwind pace and toxic culture of that testosterone-soaked world. Thankfully those days are behind us forever, hey?