Theatre Sydney Opera House , Sydney Until Saturday May 15 2021
Recommended
4 out of 5 stars 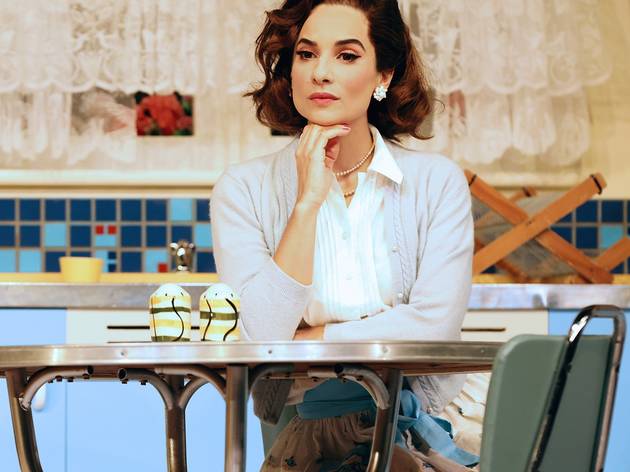 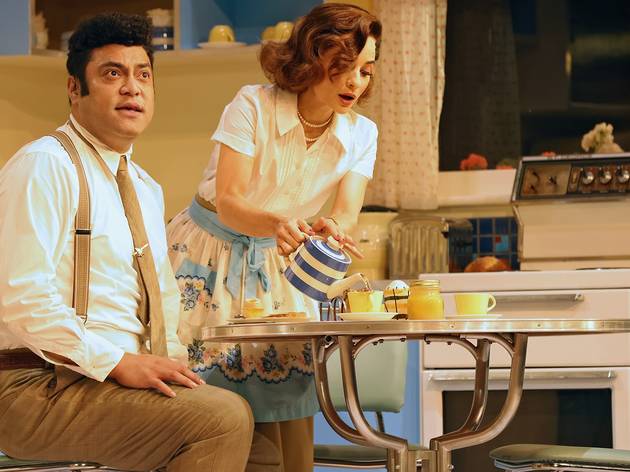 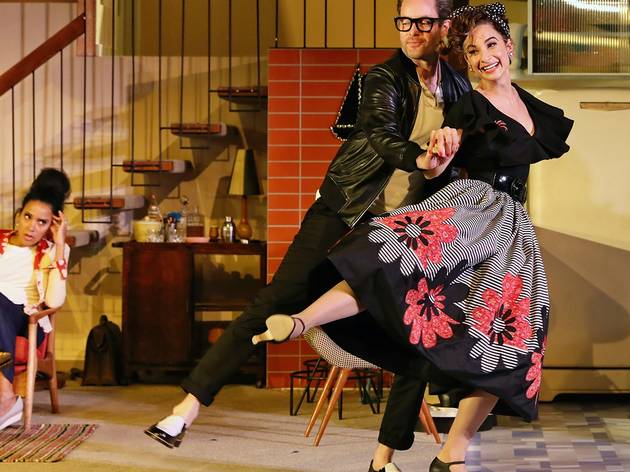 Judy appears to live the most idyllic existence, shaping her life after the prototypical 1950s British housewife. From her head to her shoes, from her kitchen to her bathroom, everything is authentic of the era. Even her meals are prepared with historical accuracy. Her husband Johnny, a realtor, is also required to adhere to these rules, dressing in suspenders and a trilby hat, driving off to work in a vintage car with his lunch box.

Judy’s world is quite strange indeed, considering that the year in which we meet her is actually 2018. In playwright Laura Wade’s Home, I’m Darling, we see a woman desperately trying to find a sense of harmony by retreating into a space she feels control over. Where she has decided that by moving back some 60 years in time, she is going to manufacture order out of chaos. Inside her inner sanctum, Judy wears high heels, girdles and swing skirts. She cleans behind furniture, in addition to cooking and baking all day. It never quite occurs to her, that to attain the peace and freedom that have evaded her outside in the real world, she has paradoxically locked herself into a past that we know to be anything but emancipatory, for women especially.

Home, I’m Darling is an intriguing work. Wade’s writing inspires curiosity from the outset, with Judy’s strange choices provoking us to ponder the conditions outside of her house, ergo our collective realities, that have driven a woman to seek refuge in such an extreme manner. We come up with some very big questions that the play may not necessarily be equipped to answer. It relies on our imaginations, and that intellectual process is certainly enjoyable, but a certain coyness in Wade’s style seems to prevent Judy’s story from being as deeply affecting as it should.

Actor Andrea Demetriades is nonetheless glorious as Judy. In a triumphant performance, she conveys all the difficult layers, able to accommodate our conflicting feelings about a woman and her dubious choices, keeping us simultaneously challenged, enthralled and entertained. Husband Johnny is appropriately rendered with a sheen of Disneyesque innocence by an eminently likeable Anthony Taufa. His boss, Alex, is given a refreshing effervescence by an engaging Kirsty Marillier, while Judy’s best friend, Fran, proves a welcome respite with every one of Chantelle Jamieson’s humorous and energetic appearances. Fran’s husband Marcus is played by Gareth Davies, irrepressible and genuinely hilarious, although less effective when the tone turns sombre. Tracy Mann is marvellous as Sylvia, an old-school feminist and Judy’s mother, particularly endearing when called on to deliver a pivotal and rousing speech that helps us place the story in proper perspective.

With a set and costumes by Genevieve Blanchett, the production looks like a candy-coloured concoction of cartoonish artifice, at once pleasurable and alarming. Together with Verity Hampson's lighting design, the imagery presented is exaggeratedly twee, a commentary perhaps on the conflicting ways one may feel about the very concepts of femininity and prettiness.

Home, I’m Darling is clearly about gender politics, but director Jessica Arthur takes care to prevent the show from being reduced to only that. Judy is allowed to be complicated. An inconvenient protagonist, neither a feminist champion nor a victim of misogyny. Even though we might crave easy and passionate theatrical proclamations in a more militant style, we are asked to see Judy the way she sees herself, which must be the best way to honour a central character from a feminist perspective. Even though Arthur says all the right things with the show, there’s a tendency to be overly cautious in the approach that can cause the staging to feel somewhat restrained. Judy is really quite mad, but the comedy never gets very wild.

One of the strategies of dealing with social and economic systems that are unsatisfactory or, indeed, unjust, is to attempt to withdraw from participation. It is, of course, arguable if it is ever possible to entirely extricate oneself from these pervasive systems, as evidenced in this play. Much as Judy tries to live by her own rules and stays firmly inside her own home, seepages will come through to disrupt every best-laid plan.

It is easy to be derisive of Judy’s ‘50s fantasy, but ways to attempt deviation from the hegemony are extremely limited. The real world is unsuitable for many, not just Judy, and those of us who find ourselves disadvantaged have to find ways to make do. Compromises are a constant, as are disappointments. When one comes to a realisation that the investment of time and energy does not bear fruit as promised, it is understandable that one would retreat and look for alternate courses. In breaking the mould, one can only look an oddball. For some, this is more tolerable than an enduring commitment to blind conformity.

Love theatre? Here's our guide to what's on around town.