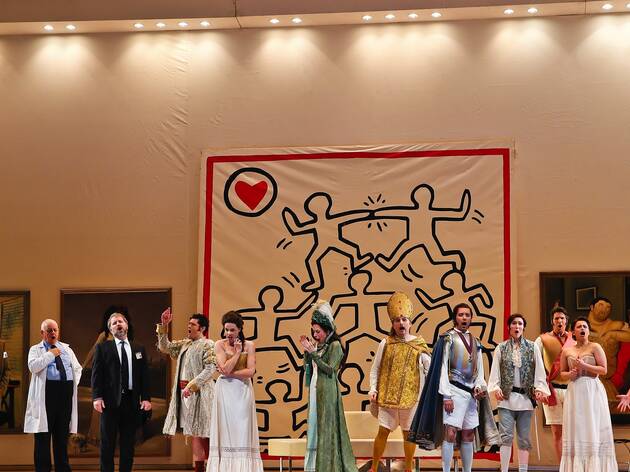 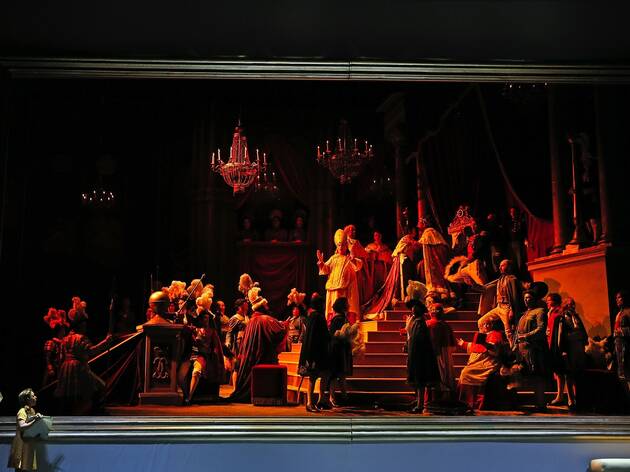 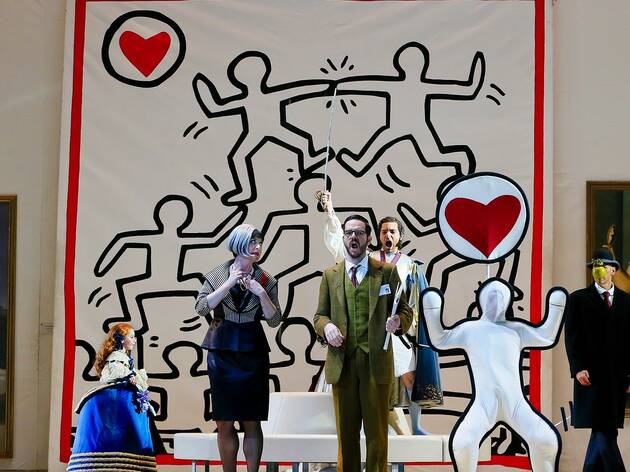 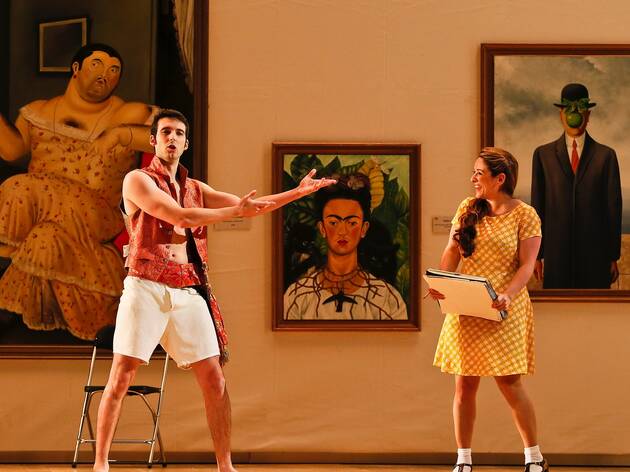 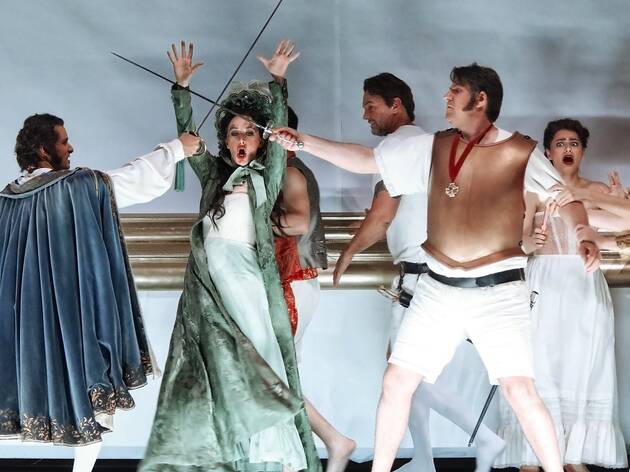 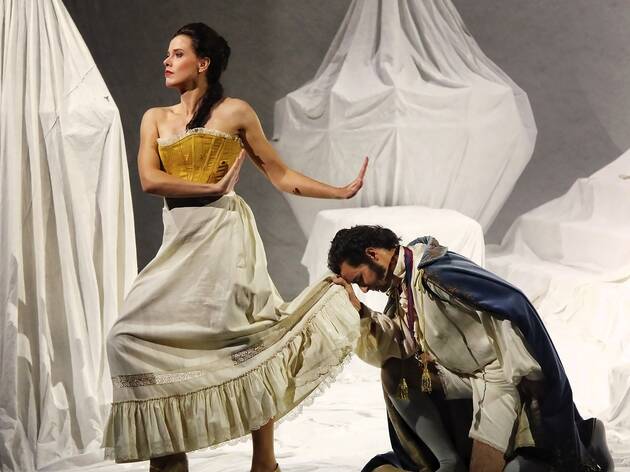 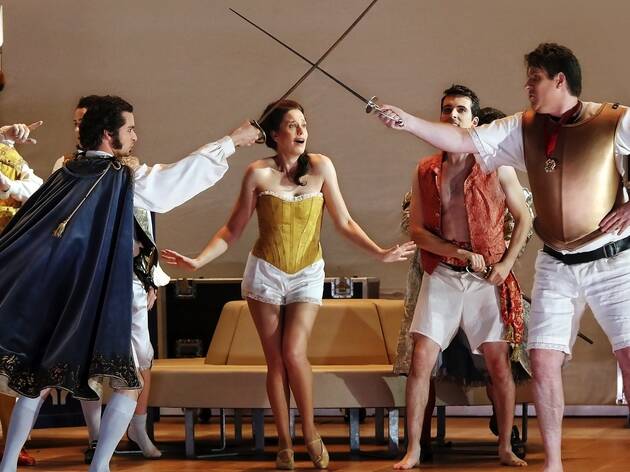 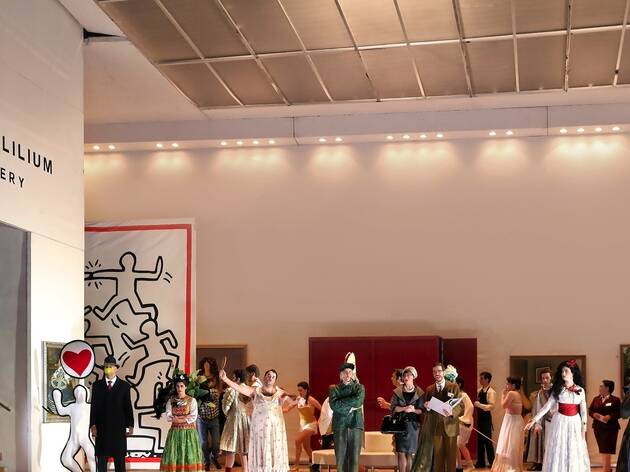 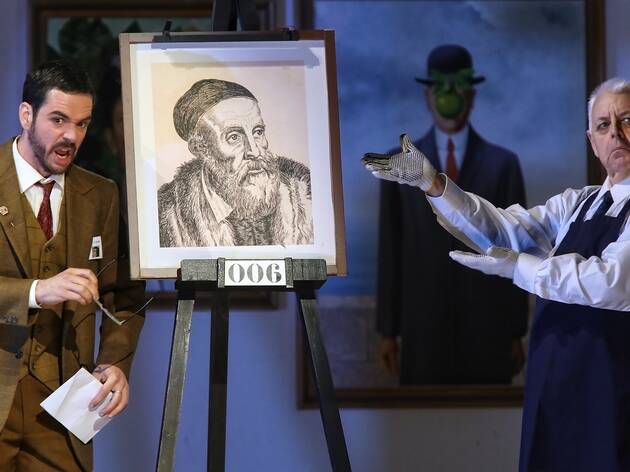 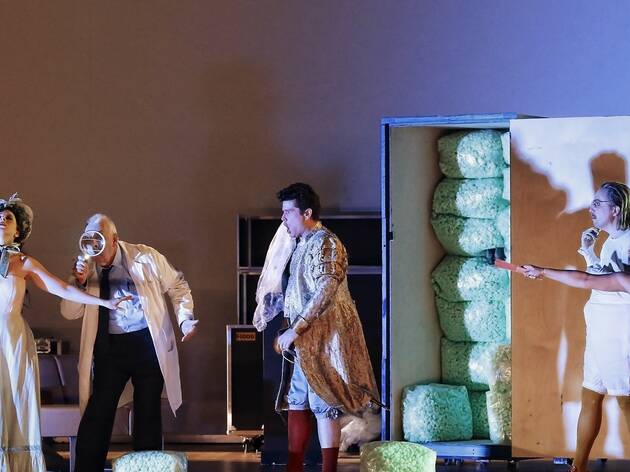 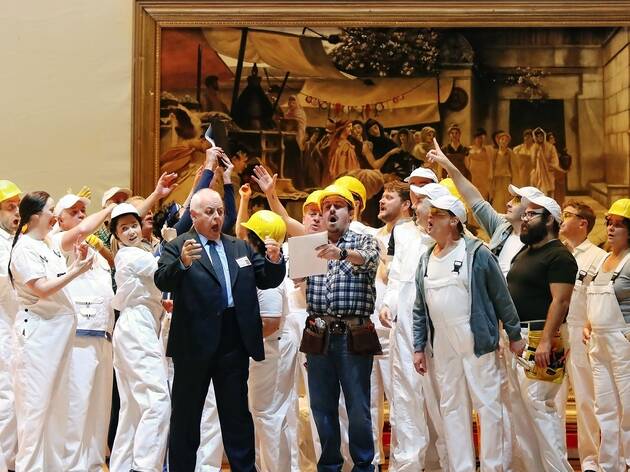 This is a review of the May 2019 Melbourne season of Il Viaggio a Reims. The production is now playing at the Sydney Opera House with almost all of the original cast. Irina Lungu plays Corinna, the role played by Ruth Iniesta in Melbourne, and Daniel Smith conducts the Opera Australia Orchestra in Sydney.

Surtitles don’t function uniformly in opera: sometimes, like in Mozart, you can afford to glance at them occasionally to get the drift; other times, like in Wagner, you really need to read every line. And then there are times when the action on stage has so little correlation to the words popping up above, you find yourself reading them as an exercise in perversity. Rossini’s Il Viaggio a Reims – at least as it appears in Damiano Michieletto’s extraordinary co-production between Opera Australia, the Dutch National Opera and Royal Danish Opera – is so wacky, the action on stage so divorced from the libretto, that you wonder if they’re referring to an entirely different opera. It should be frustrating but it’s not; it’s thrilling, and strangely liberating. If we’re not going to follow the script, then anything can happen.

Which is probably just as well in an opera where almost nothing of any real consequence does happen. Rossini’s story revolves around a group of VIPs who are intending to get to Reims in time for the coronation of Charles X, but only make it as far as the village of Plombières-les-Bains. Stranded by a lack of transport, they decide to chuck a party instead, where they perform little national ditties from their respective countries. One commentator referred to the work as “Godot for the 1820s”, but this is inaccurate: Beckett’s play is concerned with characters on the extremes of living, whereas Rossini’s mob are a bunch of pampered buffoons. It’s actually far closer to Luis Buñuel’s two masterful satires on the moral vacuity of the upper-middle classes, The Exterminating Angel and Discreet Charm of the Bourgeoisie.

Michieletto abandons the opera’s context and sets his production in an art gallery, which frees him to play all sorts of tricks with the iconography of famous paintings, not to mention the pretensions and peccadillos of the contemporary art world. Thus we get the gallery’s assistant Maddalena (Jennifer Black), the technical director Don Prudenzio (Conal Coad) and the owner Madama Cortese (Julie Lea Goodwin), decked out like an art world Anna Wintour. We get a gorgeous rendition of the Pygmalion/Galatea myth, as Teddy Tahu Rhodes’ Lord Sidney falls for the painting he’s restoring. And most charming of all, we get paintings popping out of their canvases to interact with and alarm the gallery’s wandering patrons.

And then there’s the music. Rossini was notorious for reusing his own material – in this case cutting out large chunks of it and parsing them off to other works – so there’s a sense that Il Viaggio functions like a parade of greatest hits. The overall effect, however, is astonishingly rich and varied. There are 14 major parts, and the composer has ingeniously allowed each of them to shine. Everyone, from Giorgio Caoduro and Sian Sharp in the lower registers, through the golden tenors of Shanul Sharma and Juan de Dios Mateos, to the virtuosic sopranos Emma Pearson and Ruth Iniesta, are uniformly magnificent. Pearson in particular makes a comic meal out of the batty Contessa di Folleville, and brings gorgeous texture to her long aria ‘Partir, o ciel! desio’, ostensibly a lament for her shoes. Iniesta is jaw-dropping in the final act, shifting the entire mood of the night into something pure and celestial.

Daniel Smith conducts with a surety and vigour that helps draw out the score’s grand scope, his pacing brisk but never rushed. The tonal shift in the final act is expertly handled, delicate and almost tender, with none of the bombast one could expect from a coronation scene. Orchestra Victoria plays with a joyousness and depth of feeling that seems to rub off on the entire audience; and with almost as many individual chances to shine as the singers, from solos for harp, flute and harpsichord, it often feels like an embarrassment of riches.

There’s something magic at play in this production. By abstracting the action, by contrasting the gentle pillorying of nationalistic identities with the masterpieces of those nations, and by transforming the opera into an earnest, if rollickingly silly, paean to art and art’s ability to bring people together, Michieletto has elevated, if not Rossini’s sublime music then at least his theme. It’s such a rare treat that die-hard opera lovers will not be able to resist it, but it’s also the perfect way to introduce new audiences to the joys of the form. They won’t even have to read the surtitles.