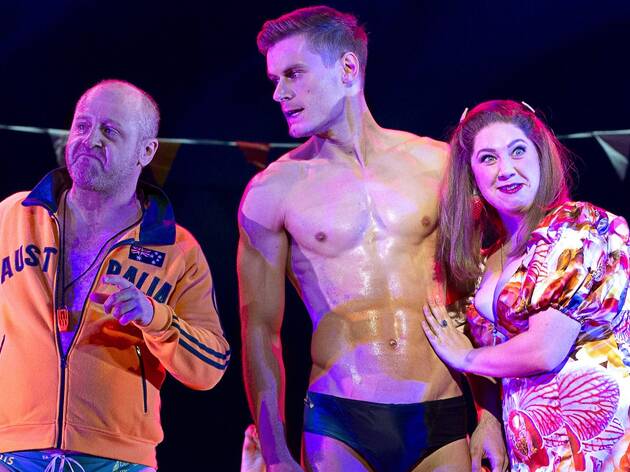 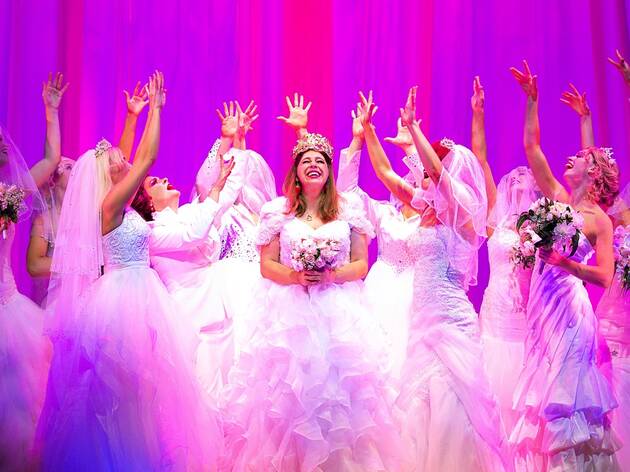 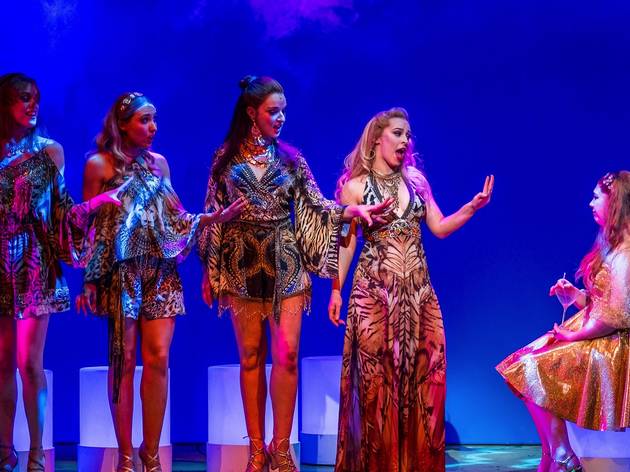 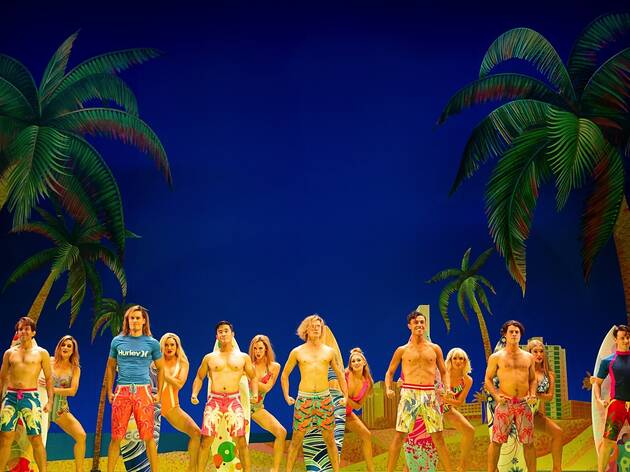 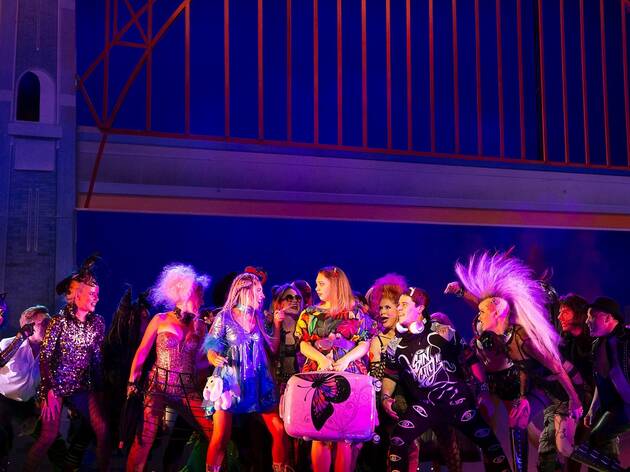 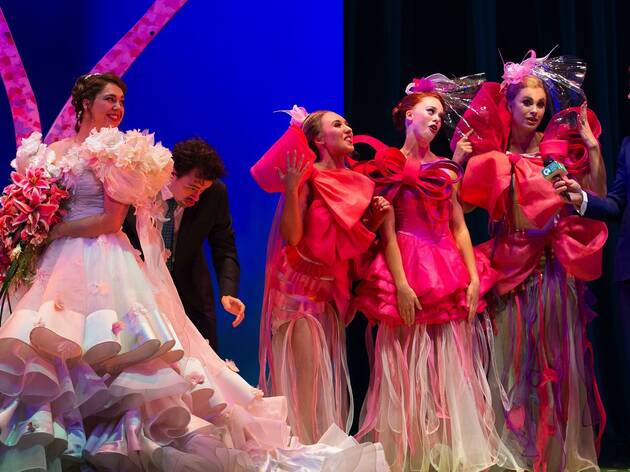 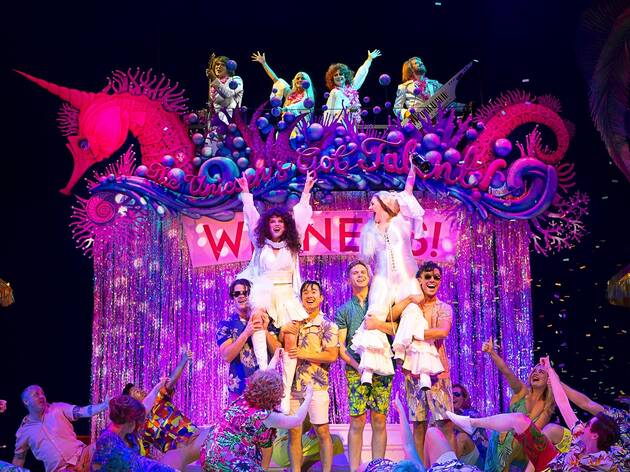 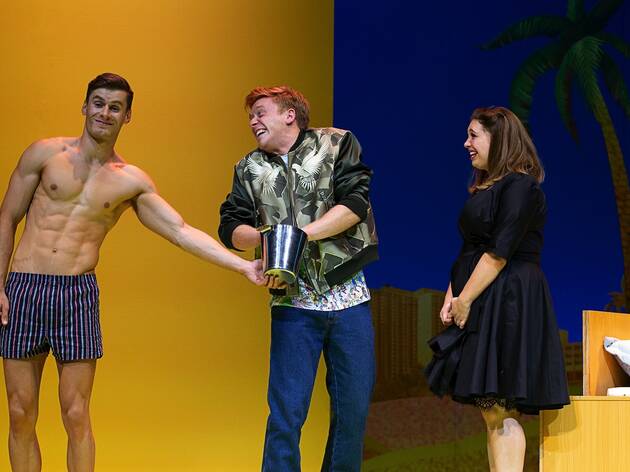 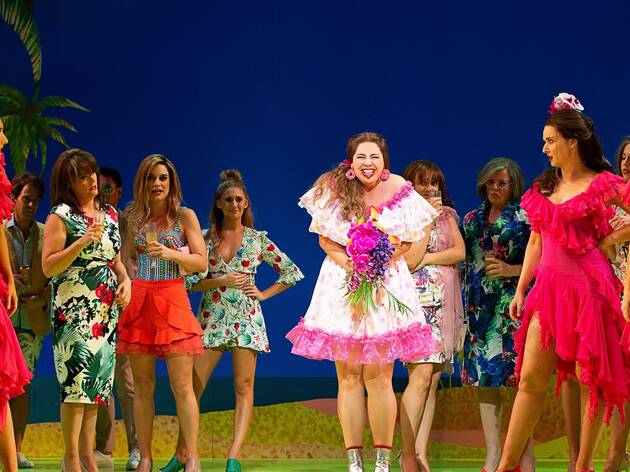 Muriel Heslop is the designated loser of small-town Porpoise Spit. She stole a dress from Target to wear to a wedding, she flies away from reality on the wings of ABBA songs, and she bamboozles her mother into handing over the family credit card by exploiting her insecurities. And yet, when she steals her family’s money and runs away to Sydney to define life on her own terms, it’s exhilarating. We root for her every step of the way.

Muriel (Natalie Abbott) is complicated and stubborn, and her actions can be thoughtless, cold or criminal. But in both PJ Hogan's 1994 film Muriel’s Wedding, and this disarmingly bold stage adaptation, she’s also deeply loveable. Muriel just wants to be loved, and don’t we all? Can’t we all understand the way her pain, and the rotten foundation of a cruel father and a small-minded community, have fuelled her to change her life by any means possible?

And don’t we all want to cheer, or laugh, or burst into tears (or all three) when Muriel finally finds an ally in Rhonda (Stefanie Jones), a fellow Porpoise Spit-expat with a hedonistic zest for life? She takes down Muriel’s frenemies with a single line, beautiful in its precise obliteration of her targets, and suddenly anything feels possible.

So off Muriel goes to Sydney, following Rhonda’s path to liberation. To her, Sydney looks endlessly exciting – a place full of queers, queens and weirdos coming together; her Sydney is a place is where you “finally get to be you.” And when she sees Sydney that way, we believe it. Later, a parking inspector shows us the pessimist’s Sydney: full of raging business-types, dotted with garbage, under construction, lacking connection. The beauty of it all is that both Sydneys exist at the same time – it just depends how you look at it.

Isn’t this a triumph of Australian musical theatre? Directed by Simon Phillips, a showman and ringleader for big, tricky stories, this is a smart, devastating, hopeful confection that runs on pop music dreams and a distinctly Australian understanding of the world.

After a five-star first season at the Roslyn Packer Theatre and a trip down to Melbourne, Muriel’s Wedding has returned to the city that sits at the centre of its beating heart. Like anyone who has gained more experience and done some traveling, it’s grown and changed a little. But the changes are good ones: the show moves more swiftly and tightly, its structure has been streamlined, and it doubles-down on the true love story of at its heart: the epic, life-altering romantic friendship between Muriel and Rhonda.

Kate Miller-Heidke and Keir Nuttall’s score, written to sit alongside and in conversation with ABBA’s colossal hits, still sparks and sparkles (Daniel Puckey is musical director), and the new cast find their way into the songs with refreshing, direct performances.

Laura Murphy now plays the role of Porpoise Spit Queen Bee Tania Degano, and she wields her power with a new kind of intimidation; there’s a scrappiness to her that suggests she might actually destroy you with her own two hands if you cross her. Pippa Grandison’s take on Muriel’s mother Betty, the musical’s truest and most heartbreaking tragedy, is genuinely moving. Stephen Madsen continues to both look charming and sing better than you remember as Muriel’s dream man, and Jarrod Griffiths, a newcomer taking on the role of Brice Nobes, has a hapless everyman charm.

But the musical belongs to Muriel and Rhonda, and Abbott and Jones are a great match as the new leads. Jones’s Rhonda has an irresistible swagger and a dirty-lovely affect that lets you understand at once that she’s too big for any town, especially Porpoise Spit. And Abbott, who must carry the whole show, does it with unstoppable energy and a clear affection for the difficult, wonderful always-striving nature that makes Muriel an enduring, iconic Australian character.

The Lyric is a big house for any story, but Muriel’s Wedding fills the space with big energy, big performances and big voices. Gabriela Tylesova’s costumes feel even smarter in a bigger space, and Andrew Hallsworth’s choreography feels clever and dynamic without detracting from essential character moments.

The show will have you laughing in its first ten minutes and then reduce you to (quiet and dignified, we swear) sobs in the second act. It’s beautiful, funny and difficult, and it feels like a miracle that something so pretty, so sly, and so smartly emotional has been developed, produced, and found its way to the Lyric. It’s better than an ABBA song, it’s better than most musicals we import from overseas, and it’s a modern classic. We’re in love.