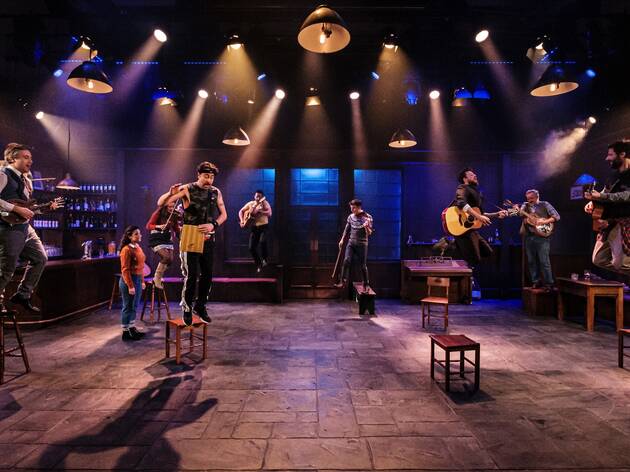 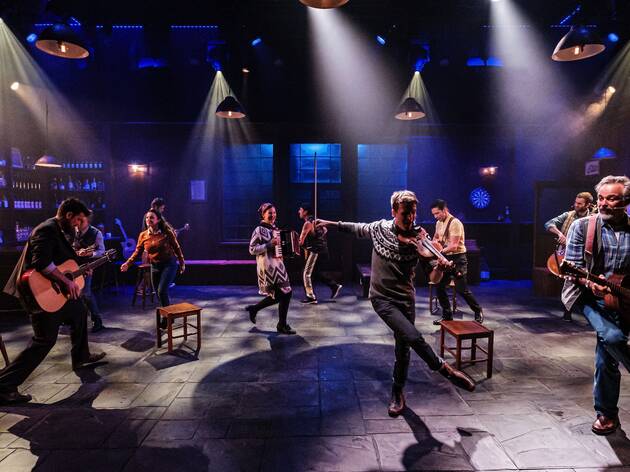 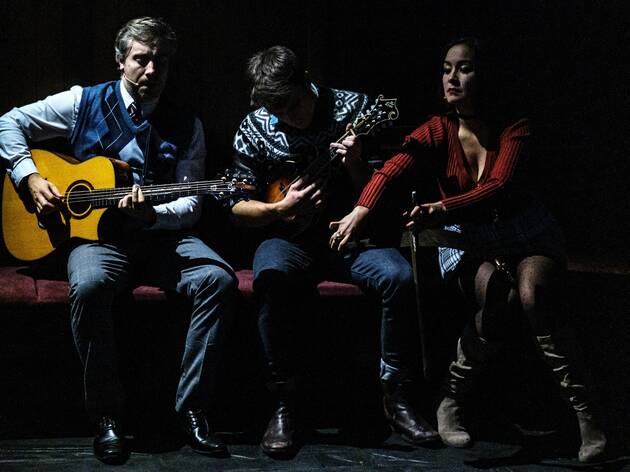 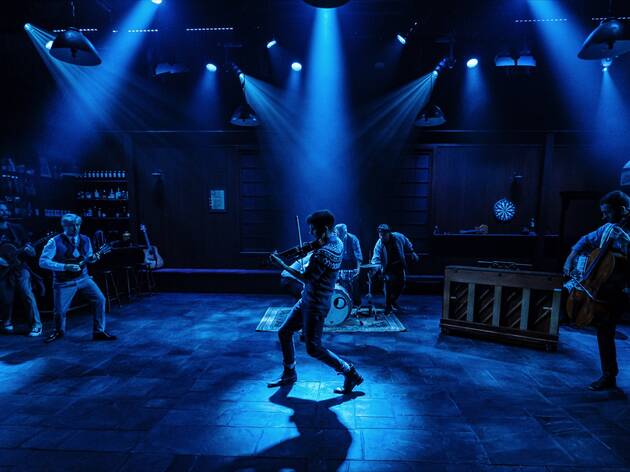 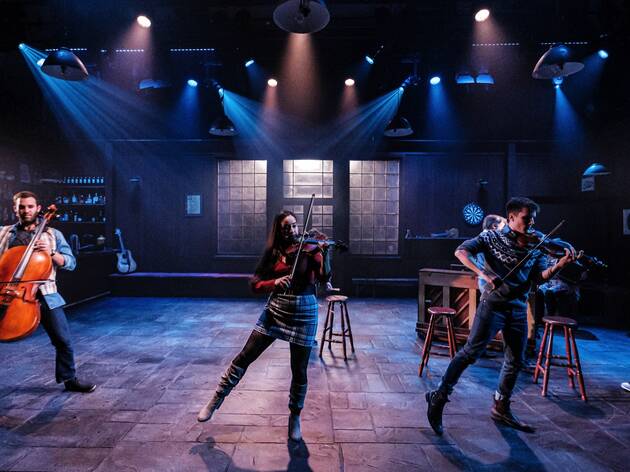 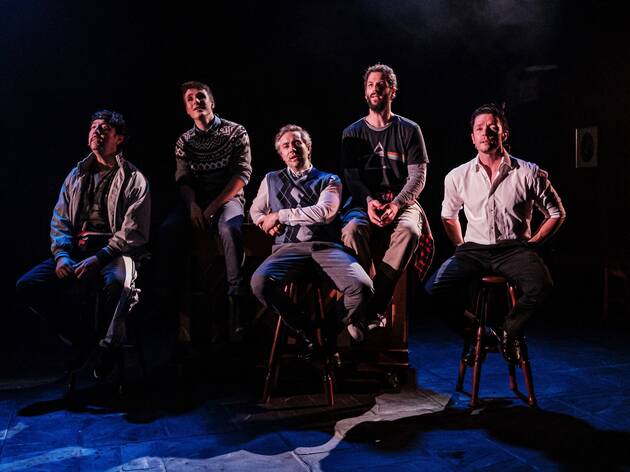 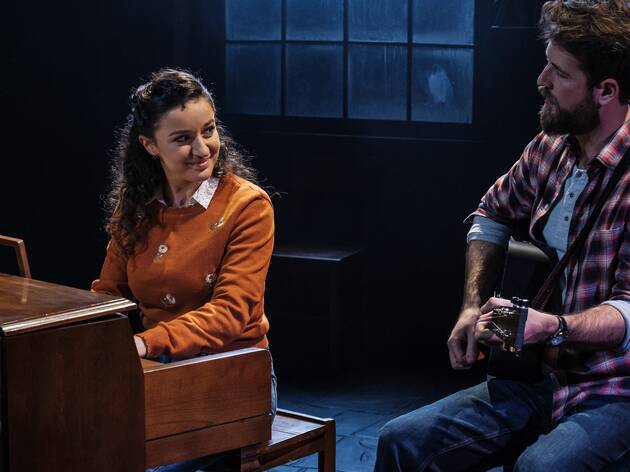 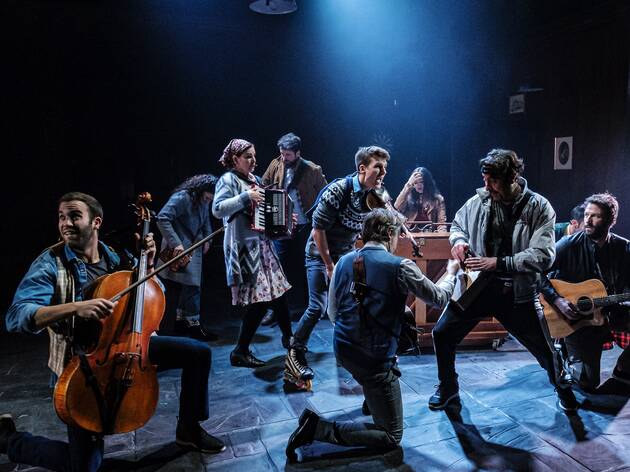 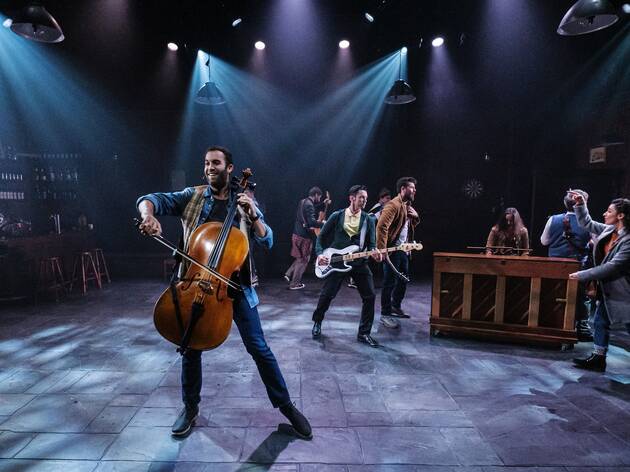 A guy and a girl meet on a Dublin street. He’s busking his last set before he gives up on music forever. She needs her vacuum cleaner fixed. Through music, a delicate, hopeful connection is forged.

Once, John Carney’s quiet and soulful movie musical, was a big hit with sensitive folks and indie-folk fans back in 2007, and at the heart of it was ‘Falling Slowly’, a duet between musicians Glen Hansard and Markéta Irglová. It won the Academy Award for Best Original song; it was recorded by Hansard’s group the Frames as well as his and Irglová’s duo the Swell Season; it birthed a thousand self-made mixtapes and beseeched whole swathes of the population to push through their hurts to find new little sparks of life.

Now a stage musical, with a book by Irish playwright Enda Walsh and eight Tony awards to its name, Once can seem improbably frail. It’s the introverted sibling of louder, showier musicals and its most spectacular moments are when the company of actors strum guitars in unison, or when tears well in a woman’s eyes as she plays the piano.

It sits beautifully inside the Eternity Playhouse, Sydney’s church-turned-theatre. On a muted, minimal set (by Hugh O’Connor), we met the Guy (Toby Francis) and the Girl (Stefanie Caccamo), and watch as they bring each other back to life.

Francis is almost dangerously vulnerable; he looks as lost as his broken-hearted, struggling character. It’s Caccamo’s Girl that propels the plot (she’s the alt-version of a manic pixie dream girl, but there’s a gravity to Caccamo that goes some way towards combating the trope), and she does with the deft confidence of a star – plus, when she sings it’s heart-stopping. She’s droll and direct, more comfortable in the world than Francis’ Guy. She pays to have her hoover fixed with music, and as she helps the Guy pick his guitar back up and go after what he wants, something impossible blooms between them.

Director Richard Carroll directs a very fine but self-conscious production; on opening night the show felt almost embarrassed by its own emotions, and seemed to brush off the too-real feelings with a too-brisk pace and broadly comic line readings. There’s an interiority to Once that can’t be avoided or tempered – it demands honesty, smallness, unguardedness. It’s better when it just lets itself feel, and this might settle over the course of the run.

When Carroll and his company do find those pure moments, it’s wonderful. They exist largely in the music, which is played onstage by the cast (the musical director is Victoria Falconer, who plays Reza). When a fiddle or a mandolin joins the melody, everything eases. In the music, there’s solace.

Caccamo is an extraordinary vocalist, full of gorgeous yearning, and she’s well-matched by Francis, who could sing Apple’s endless Terms and Conditions and make it sound profound. Even when the production around them goes ham or rushes through a moment, they hold true to their connection.

Amy Campbell is the movement director, and she keeps the musical dreamlike and swaying, suspended in its own gentle reality until it turns into raucous music-and-merry-making. It’s smartly pitched.

And there are moments that sparkle: walking into the theatre to take your seat, you’ll pass cast members playing a song just for you, and the people sat near you, on the stairs (my section was treated to, among other tracks, the Beatles’ ‘I’ve Just Seen a Face’); the ensemble cast coming together in a sumptuous vocal blend in beautiful numbers like ‘Gold’; Drew Livingston’s turn as a banker from Cork with a weakness for balladry.

Once is a musical that might make you cry – it’s wistful and hopeful and hard, like a lot of life – but it brings with it a sense of release. It’s a show for anyone bruised by love, or just by the harsh business of living. And it’s a show that believes in our essential worth, in our essential capacity to grow and to be happy once more. This production reaches out and touches a reassuring hand to your shoulder and says yes, me too, but we can get through it together. As the Guy sings in ‘Falling Slowly’: You have suffered enough, and warred with yourself. It’s time that you won.

The Darlinghurst Theatre Company production of Once has extended its Sydney season after selling out its initial run. A new week of performances are now on sale, from July 30 to August 4.