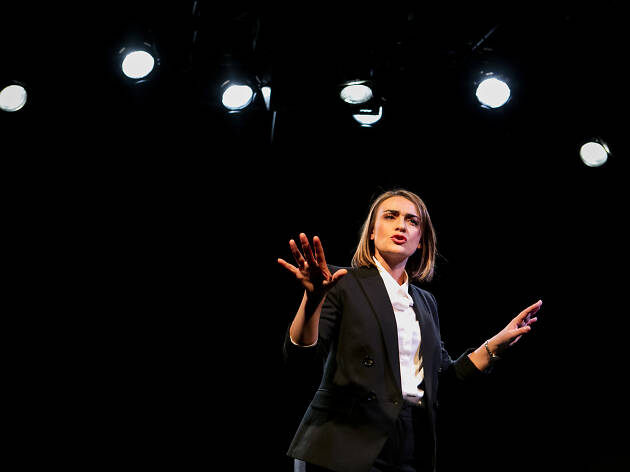 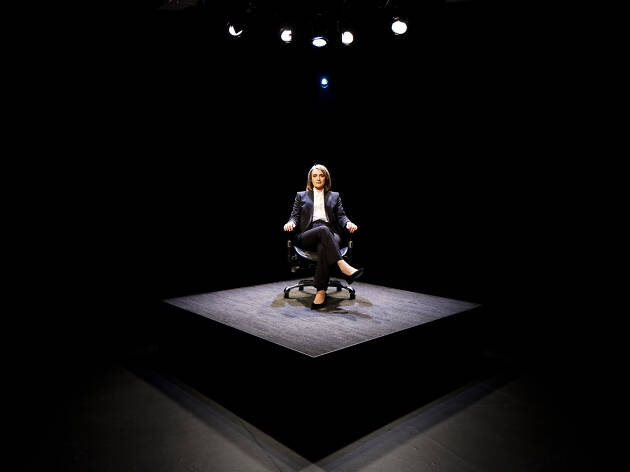 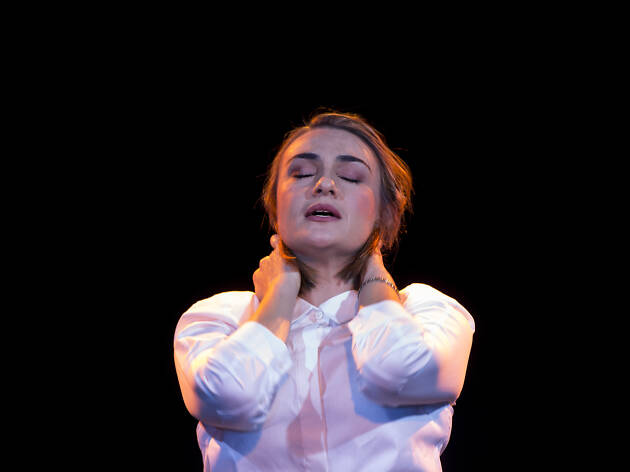 “The law is the law”, says the cool-headed criminal defence barrister Tess, with a sense of finality and a flickering dismissive hand, early on in Suzie Miller’s Prima Facie. But things aren’t so black-and-white in this hard-hitting one-woman play that takes a searing hot, clear-eyed look at the Australian legal system, sexual consent laws and their effects on victims. Picking apart the nuts and bolts of the system, Griffin Theatre Company’s production speaks directly to an all-too-familiar reality where one in three women experience some form of sexual assault, and the law’s delivery of ‘justice’ fails to account for the deep imbalances of power and gender.

In a post #MeToo world, the idea of ‘legal truth’ is left hanging in the air: in particular, whose truths have we been listening to? Who has been silenced? And how do we reform a system defined by patriarchal values? In Miller’s play, these questions are thrown into a blender – tossed around gently at first, but later swivelled around and crushed – leaving pulpier, broken pieces in the jar. This is Tess’s journey as she takes centre stage: in one act, she revels in the highs of the legal profession – the next, she’s struggling to breathe while swimming in the lows of being a part of the legal process as a sexual assault victim. It’s a momentous, life-altering shift from the lawyer initially presented as so breathtakingly ruthless that she likens her courtroom performance to a horse race. This early version of Tess sees every movement predictably running its course; the practice of law as a competitive thrillride. And why wouldn’t she? Here, she’s fully convinced that the pillars of the legal and judicial system produce results that reflect due process. But that’s all turned on its head when an incident shakes up the very doubts and judgements Tess previously placed on other victims – and she’s forced to experience firsthand a system that traumatises and re-traumatises women over and over.

Sheridan Harbridge shoulders Tess’s slight arrogance and know-it-all demeanour with a charming, off-centre approach. She’s stoic, captivating, and smart. It’s a miraculous powerhouse performance – not just because Harbridge absolutely brings to life the woman behind this confident facade, but also how effortlessly she seems to slip in and out of the characters within Tess’s life. You get close and personal into Tess’s inner thoughts – which are occasionally quippy as they are brash – and you hear and feel her interactions with others. Harbridge’s voice is used meticulously; whether it’s drawled as a mocking imitation of a colleague, or when her rapidfire words delivered with blazing energy suddenly subsides into stuttering, hot-flushed syllables.

What makes this play especially astonishing, though, is how lived-in its writing feels. Miller’s background as a lawyer shines in every line of dialogue uttered out of Tess’s mouth: from her back-and-forth wrestling of the ‘objective’ legal reasoning behind her assault, to the fine details of courtroom procedures. It feels somewhat more bulletproof because the words come straight from a lead character who knows and understands the law, but still crumbles under the weight of its pitfalls. This is no glossy Law & Order showcase, and Miller looks at but also beyond the signature cross-examination – emphasising the lengthy process that puts women through hell to prove a crime that was committed against them. “Seven hundred and sixty-three days”, Tess utters again and again – her interactions with police, the DPP, her colleagues, laying bare the onerous consequences that blames and shames women before they even take the stand.

Director Lee Lewis conjures up a production that rubs off as both shiny, polished and gaspingly raw. Renée Mulder’s minimalist set leaves only one swivel chair in the middle of the stage, and projections on the wall mark the sometimes non-linear timeline. The lighting design from Trent Suidgeest is similarly subtle, as is Paul Charlier’s warpy music – but both work in perfect tandem to amp up ominous moments and echo the trajectory of Tess’s fractured emotions.

It’s hard not to bring in the #MeToo movement, or recent cases involving high profile entertainers that saw the floodgates open wide to scrutinise a legal system and society that consistently disbelieves women. But Prima Facie gives a platform for a woman to speak her truth, asking us to look beyond first impressions and to dig deeper into the very structures and procedures that embed underlying injustices. This is an urgent and compelling work: one that should be as widely seen for its craft, just as much as its subject matter should be better understood by our politicians, lawmakers and general public. Run, don’t walk.

Read our interview with Suzie Miller and Sheridan Harbridge about what compelled them to tell this story.