The Shadow Whose Prey the Hunter Becomes 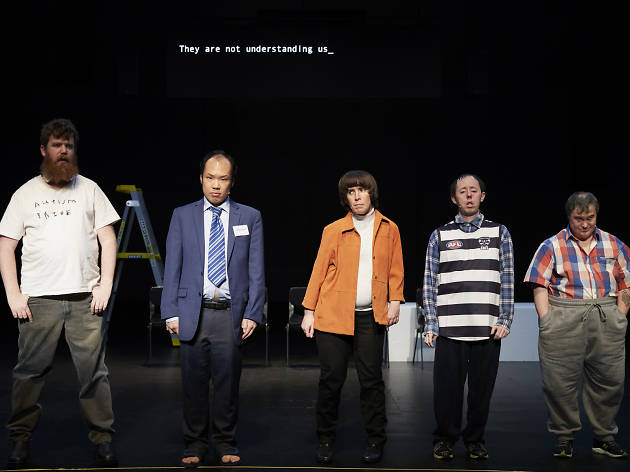 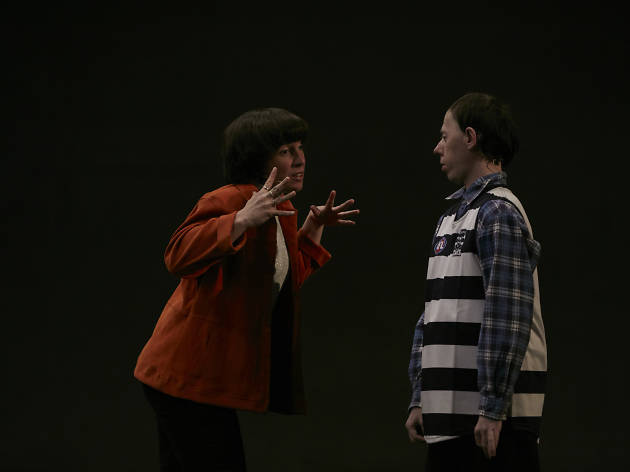 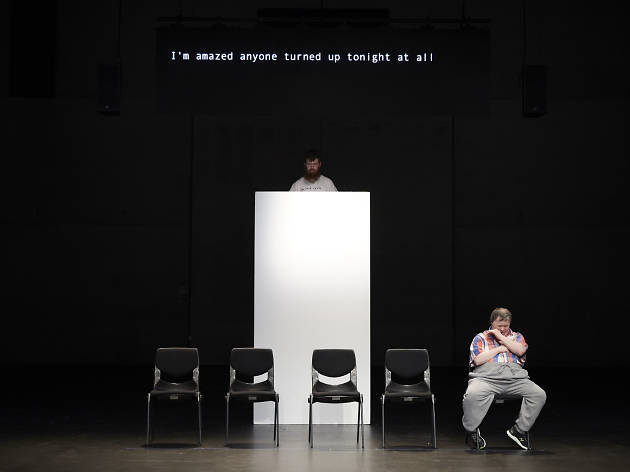 In this political era, it’s easy to play into the belief that human decency and intelligence are dwindling at a rapid pace. Deteriorating human rights and the uprising of automated technology are just some of the slow forces which threaten to crush humanity’s relevance to a pulp. In Back to Back Theatre’s The Shadow Whose Prey The Hunter Becomes, this conversation becomes ignited in a theatrical public meeting – five neuro-diverse activists challenge what’s perceived as “normal” in a time when traditional concepts of typical human existence are shifting faster than ever.

Before the actors (who play themselves) are first seen, the opening few lines of the play are shown through surtitles: “I’m going to explain to you how to touch someone”. It immediately sets up a scene of frank, tongue-in-cheek explanation on the topic of basic consent; of identifying where the line of appropriateness sits in public and private spheres. Back to Back Theatre are internationally renowned for pushing the boundaries of orthodox theatre, injecting surprising humour and authenticity into innovative, political works which champion the voices of actors with disabilities.

And here in their latest production, the ensemble’s experiences of being “othered” by wider society equips them with the tools to begin unpicking prejudices they’ve been burdened with their entire lives – vocalising their problems as a minority, as inherently ours as a collective society too. In a near-future where machines and Artificial Intelligence will inevitably surpass human intelligence, they suggest that in order to “save the world”, there’s a need to reevaluate upon how we treat each other as basic human beings.

The Shadow Whose Prey The Hunter Becomes is set in a community centre in Geelong. Five members – Mark Deans, Michael Chan, Simon Laherty, Sarah Mainwaring and Scott Price – are seated on a panel which faces its audience head on. But despite the huge expanse of  space in Bay 17 Carriageworks, the room buzzes with the intimacy of a dark auditorium. Though it’s presented as such, it’s not your typical democratic forum. You watch each of the actors in real time prepare the room; hear them rehearsing their lines; witness them struggling to come to a consensus on certain discussion points. Between their candid exchanges with each other and direct speeches to us, it becomes increasingly clear that their goal to bring everyone together in an unpredictable world, pressing for a need to “re-educate” its audience of neurotypical privilege.

The show works best when it leans into its sense of candour, and its highly collaborative and improvised mode of devised performance seeps truthfully into the dialogue between one another. The group don’t always agree with each other – they talk freely about the term “intellectual disability” and their differing views of being defined by labels. At other points, they engage in sometimes funny, sometimes fraught interactions with the artificial intelligence voice recognition machine (the surtitles reveal itself to have a Siri-like mind and voice of its own) regarded as “patronising” by one, and practical by another.

Though it’s part of the beauty of free-wheeling discourse, the squabbling doesn’t always come with a solid focus – and leaves some of its complex ideas hanging. The reveal of the “forgotten” histories of corporations and institutions who enslaved and abused people with disability is by far the most resounding issue of the bunch, but there’s not enough nuance or time given to the very messy conflict of whether we can still treasure precious childhood memories when those who were instrumental to them have committed horrific crimes. The connection made to recent allegations against Kevin Spacey and Michael Jackson doesn’t help – even if it adds dramatic fabric to this tricky predicament.

While the show intermittently flounders in between these points, the meeting is still an essential one driven by moments of empathy. It’s dramatically ramped up by an engaging score (Daniel Farrugia, Luke Howard and Jonathon Zion), and lit brilliantly by Andrew Livingston and bluebottle who bring the audience in as a mere spectator in some moments and culpable participant in others. It sets up the backdrop for the five performers to hold up a stark mirror up to its audience, and how ill-judged presumptions of the superiority of typical human intelligence can play out in the future. “It’s sinking in,” Simon says near the end of the play, describing a hypothetical that places us directly in their shoes.

Indeed, as the performers move chairs out of the space, and remove the yellow tape off the floor, it’s a reminder that theatre is momentary: a transient place for the interchange of ideas where we are encouraged to listen. The real test is how we choose to take those learnings with us into the world after the lights go out.