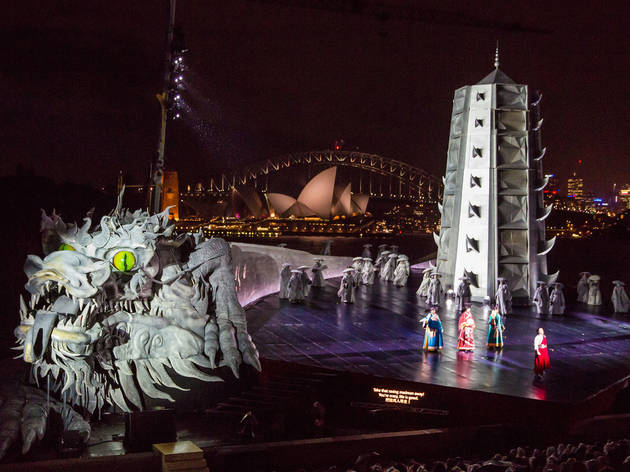 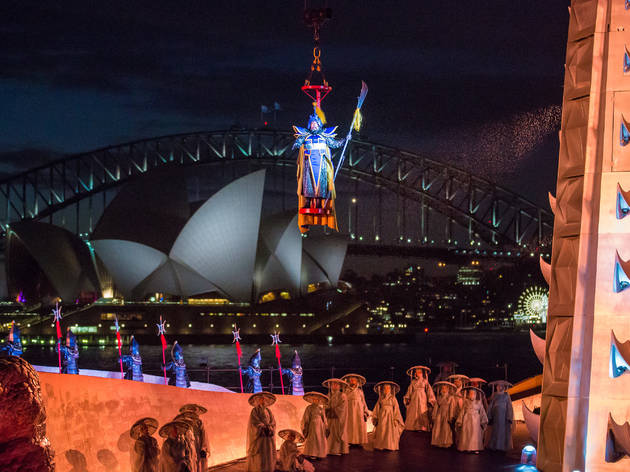 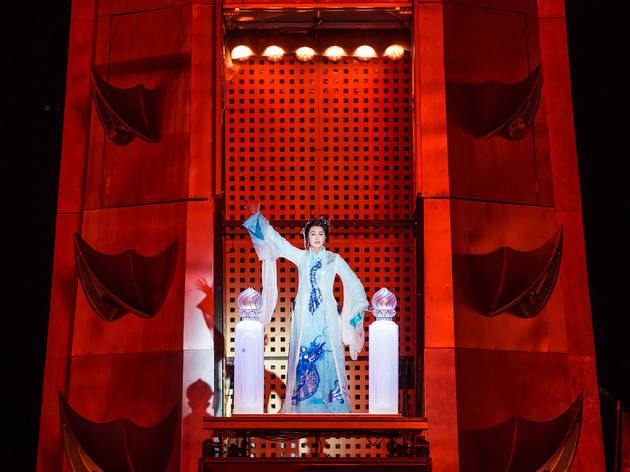 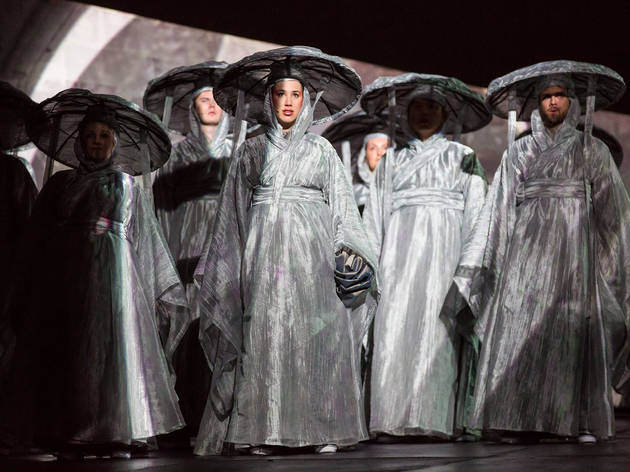 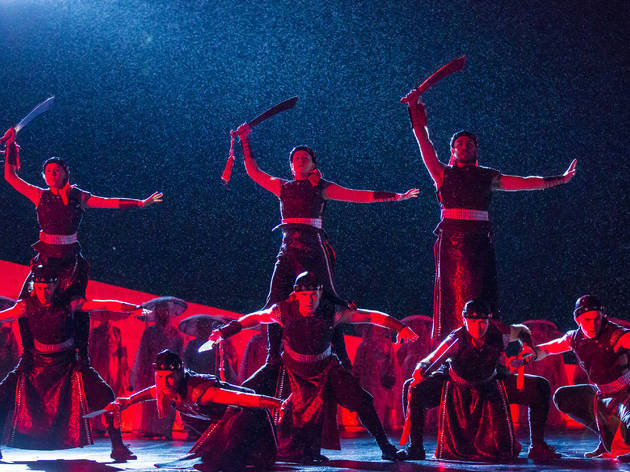 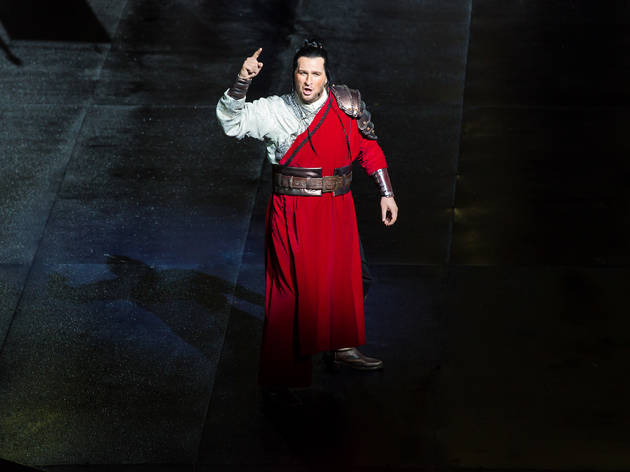 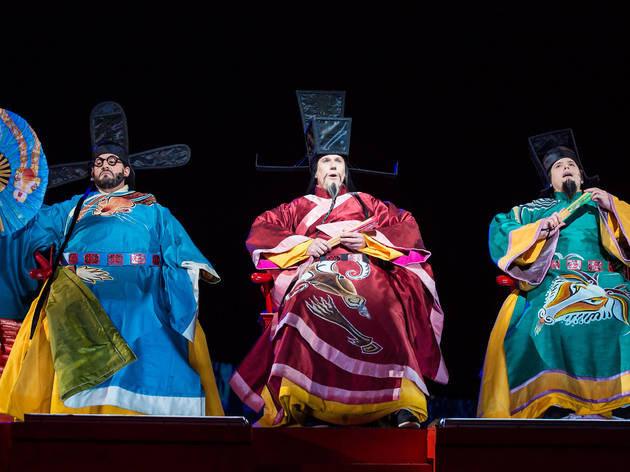 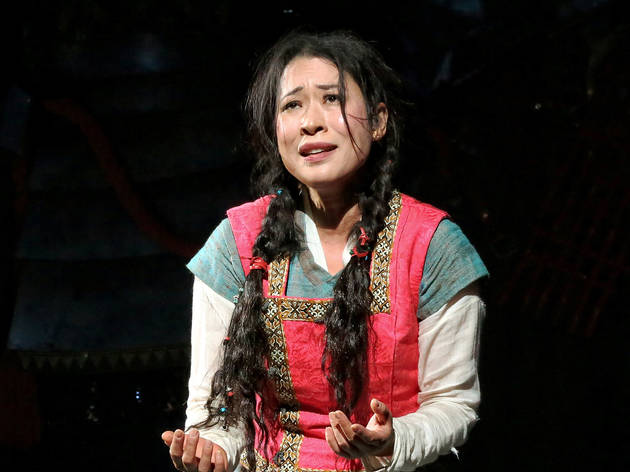 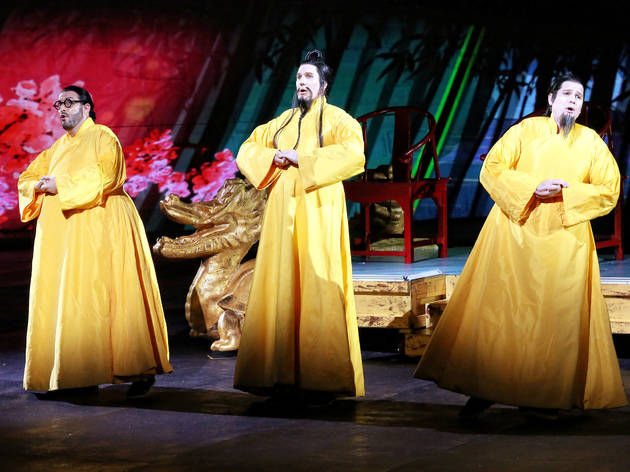 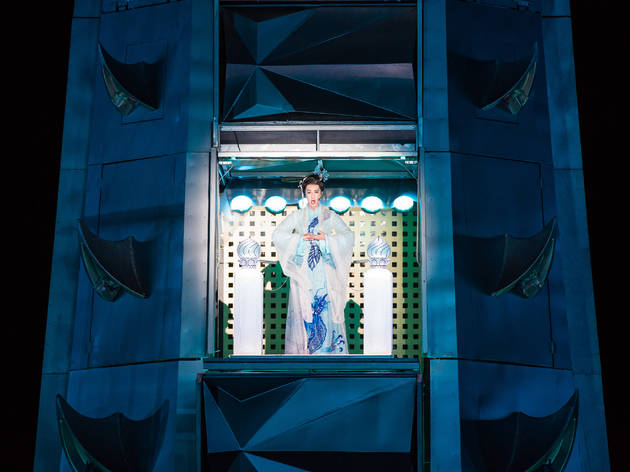 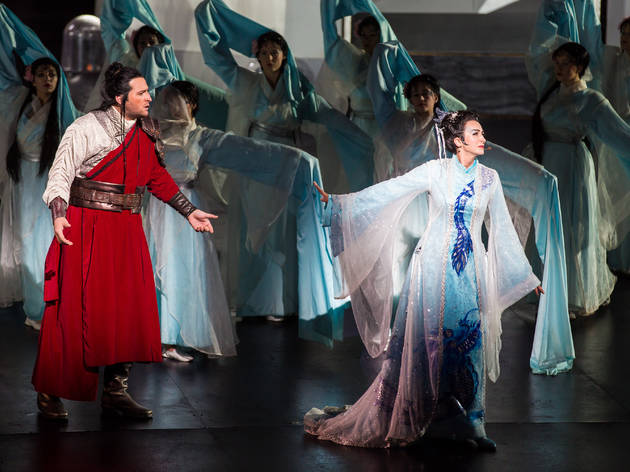 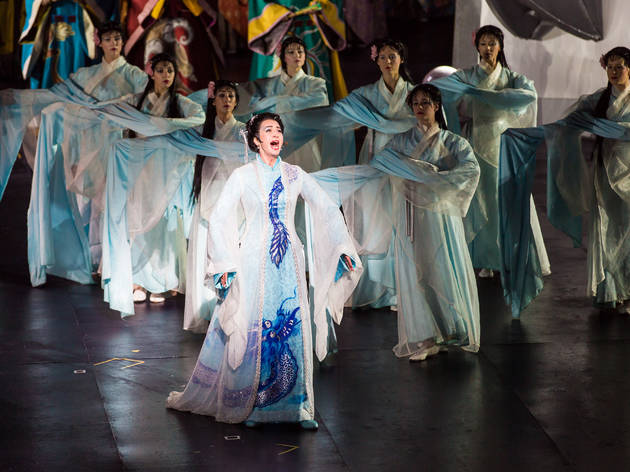 Read Time Out Sydney's guide to Handa Opera on Sydney Harbour – and do HOSH like a boss.

How do you solve a problem like Puccini’s famously difficult (and unfinished at his death) opera Turandot? Sure, it is one of the composer’s most head-to-toe gorgeous scores, and features the most famous aria in the canon, immortalised by Pavarotti at the 1990 FIFA World Cup. But the plot issues of Turandot have plagued it since its 1926 premiere – and in Opera Australia’s new outdoor production, not even fireworks, a 60-metre fire-breathing dragon and crane-assisted aerial hijinks can obscure them.

The plot, drawn from Carlo Gozzi’s 18th century commedia dell'arte play (which was in turn inspired by a 12th century work by the Persian poet Nizami) takes place in Ancient Peking, where the princess Turandot enacts revenge for an ancient crime by setting each of her prospective suitors three riddles, and then beheading them when they (inevitably) fail. When a foreign prince, Calaf, successfully solves Turandot's puzzles, she seeks to reneg on her deal – and he offers her a way out: if the princess can discover his name by morning, he will submit to the executioner's sword. Cue the roof-raising aria 'Nessun Dorma'.

So far, so fine. We’ve left out the bit where Calaf abandons his blind elderly father and loyal servant Liù so that he can woo the Princess – but you might forgive this as a quirk of reckless, romantic youth. You might also swallow the idea that Calaf falls for Turandot mere seconds after proclaiming her a murderous monster, thanks to a glimpse of her “white perfumed robe”. We’ve all been there.

What happens next is harder to swallow. And you will probably lose that loving feeling once you watch Calaf and Turandot stand by as Liù is tortured for keeping her master’s identity secret – and finally stabs herself to death.

You will understandably experience whiplash when the libretto leaps improbably from Liù’s suicide to Calaf and Turandot’s coupling, within mere minutes.

And since there’s nothing in the original libretto or in this production to make psychological sense of the love story between Calaf and Turandot, we’re left with the unpleasant sensation that we’re meant to be rooting for two entirely self-centred and superficial brats who, let’s face it, probably deserve each other – but maybe not a fireworks display.

Still, Chinese-born New York-based director and choreographer Chen Shi-Zheng forges ahead, with a big budget at his disposal, and some big voices to sell those gorgeous arias: (on opening night) Italian tenor Riccardo Massi, Serbian soprano Dragana Radakovic (making her Opera Australia debut), and Hyeseoung Kwon (who reprises the role of Liù, while she performed to perfection in Graeme Murphy’s production for Opera Australia in 2015).

The roles are all beautifully sung, though anyone who saw Yonghoon Lee sing Calaf in Murphy’s production will say that his impassioned performance makes Riccardo Massi look a little demure. The star of the evening is Kwon, who has the purity of voice and the acting chops to pull off the part – which also happens to be the only sympathetic character. In her hands Liù is the believable, warm, beating heart of a production that might otherwise leave you cool.

Style wise, this instalment of HOSH feels a bit like Disney-does-opera – right down to Turandot’s gown, which seems straight out of Frozen. Chen has delivered the most visually conservative of the five Handa operas, with set and costumes unequivocally pointing to ancient China (in contrast to, for example, HOSH Madama Butterfly, which transposed the action to contemporary Japan).

There’s also remarkably little pushback against some of the original opera’s Orientalist tropes: advisors Ping, Pong and Pang, for instance, are still caricatures better suited to Gilbert and Sullivan than a contemporary drama.

Special effects come by way of several crane-assisted aerial stunts, some old-fashioned fire-breathing, and video projections that are occasionally more screensaver than spectacular. The fireworks sequence, which has no logical place in the altogether un-celebratory drama of Turandot, is dropped in at the end of ‘Nessun Dorma’. The effect is self-congratulatory, rather than genuinely climactic or cathartic.

Opera Australia have got HOSH down to an almost foolproof recipe: take one opera with a catchy score and at least one hit aria; add international stars, a dance scene, a fireworks scene, and one giant stage prop. Shake in harbourside setting, serve alongside themed catering.

There’s nothing wrong with having a winning formula – but this production often feels more like a congruence of ingredients than a fully satisfying dish.