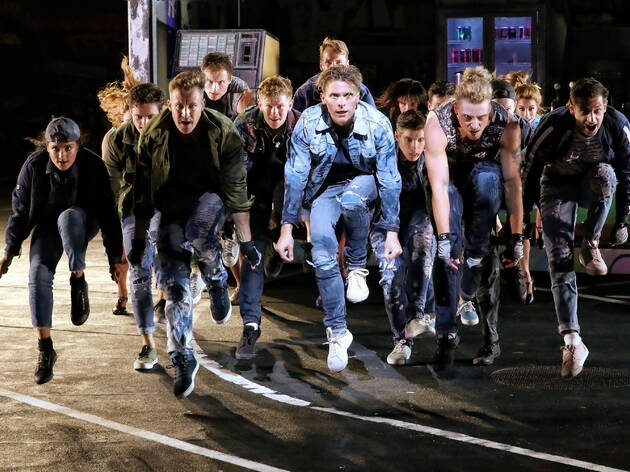 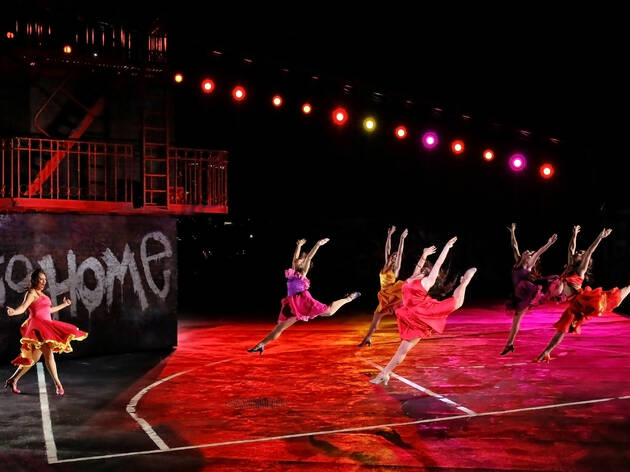 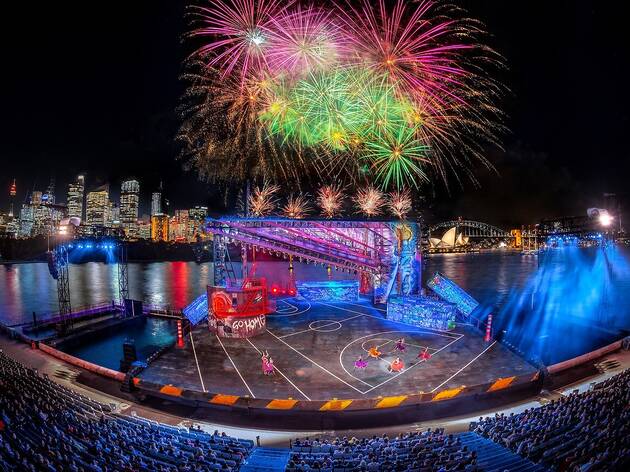 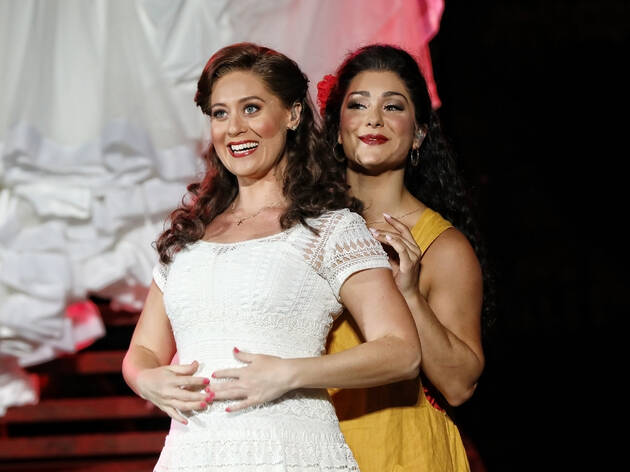 It’s taken eight years of Handa Opera on Sydney Harbour (HOSH), but it finally happened: a downpour on opening night. Of course, there’ve been some performances that have taken place in the rain or were called off, but openings have always happened under clear skies.

You’d think that West Side Story, the first musical to be performed on the harbour-side stage, mightn’t fare too well in wet conditions given the athleticism required in Jerome Robbins’ choreography. But it turns out not much can stop the committed ensemble of performers, who gave their absolute all performing under a downpour that lasted most of the first act. Yes, the women swapped their regular heels for safer plain black sneakers (of course their safety comes first, and these are the backup shoes for wet weather), but the dancing was still spectacularly realised. And in a number like ‘America’, which is all high kicks and swishing skirts? The rain actually adds a little something, as the dancers joyfully kick water high up into the air.

It’s enough to make you forget just how soggy you’re getting under your poncho.

(A word of advice: if it looks at all like it might rain, pick up a $5 poncho from a merchandise stand before the show starts.)

The opening night conditions make it a little hard for us to accurately judge the quality of dance – and dance is a key narrative element in the first act of West Side Story – but it’s clear that Robbins’ choreography, with its exuberant jazz-meets-ballet-meets-Latin style, translates wonderfully to the outdoor setting thanks to Julio Monge, who’s recreated and adapted it for this setting. And rain or not, what the ensemble did on opening night was impressive. We’d love to see just how impressive it is in ideal conditions.

The other elements of American director Francesca Zambello’s production are a little easier to gauge. Hers is a fairly traditional take – and thankfully has the least stunts of any HOSH so far; nobody flies in on a balloon and nobody swings from a chandelier – but one that proves the ongoing appeal and emotional pull of this musical, one of the greatest ever written.

The shape of Arthur Laurents’ book – which famously transplants a Romeo and Juliet tale into 1950s New York and concerns a war between two young gangs: the white Jets, and the Puerto Rican Sharks – is still brilliant, and the sense of mounting tragedy is perfectly balanced with song and dance numbers. But the dialogue itself has aged a little, and the cast sometimes struggle to ignite it in an outdoor setting so large.

The same can’t be said of Leonard Bernstein’s score – a pivotal work of musical theatre that superlatives simply can’t get close to capturing – which is both played and sung beautifully in this production, under conductor Guy Simpson.

There’s been an important conversation happening over the casting of white actors as people of colour, reignited by Julie Lea Goodwin’s casting as the Puerto Rican Maria. While the politics of her casting are problematic, there’s no denying the strength of her performance – it’s rare to hear a Maria of this quality, marrying musical theatre and operatic styles so confidently. Her acting has also improved drastically since she took on the role back in 2009, and she nails every side of Maria; from her girlish playfulness in ‘I Feel Pretty’ to her feistiness as she takes on her brother’s girlfriend Anita in ‘A Boy Like That’.

She has strong vocal rapport with Alexander Lewis as Tony, and their work together in ‘One Hand, One Heart’ and ‘Tonight’ is utterly captivating. Lewis could stand to dial down his intensity just a tiny bit, but he sings gorgeously and captures the all-or-nothing madness of a young person falling in love for the first time.

As his best friend Riff, Mark Hill is perfectly cast. He’s the kind of genuine triple threat you need in the role and a real leader for the Jets, especially in ‘Jet Song’ and ‘Cool’, which is one of the choreographic highlights.

But the show is all but stolen by Karli Dinardo as Anita – and any good Anita should steal the show; she gets the best choreography and is the character with her feet on the ground while everybody else is ten feet in the air with either newfound love or unquenchable anger. Dinardo is an Australian-born performer who’s been working in America for several years now and has played Anita in several productions overseas. It’s a gift to see her back home and she lights up the stage from the moment she starts dancing with the superb Waldemar Quinones-Villanueva (who plays Bernardo) in the ‘Dance at the Gym’ until she pulls out the vocal fireworks in ‘A Boy Like That’.

Of course, literal fireworks are mandatory for HOSH, but they feel more dramatically appropriate and tasteful here than in some other productions. In fact, Zambello’s entire production is tasteful, which is saying a lot when you’re working on this scale. Set designer Brian Thomson’s stage is painted as a basketball court, dominated by a huge freeway overpass that hangs above. It’s a mammoth space, but he and Zambello have made it feel surprisingly intimate by defining spaces and pushing all the action forward to the audience.

And it’s clear that Zambello wants the audience to feel this production in their guts, especially as the subject – racial intolerance and fear of the ‘other’ – has tragically lost none of its relevance. She makes one small step away from the West Side Story formula that we know and love to highlight the audience’s complicity in the final moments. But otherwise, this is a West Side Story that embraces all that made the musical irresistible in the first place. It’s even irresistible from under a soggy poncho.

Read our guide to Handa Opera on Sydney Harbour and find out how you can score $45 tickets to West Side Story.