13 ways to spend summer at the revamped Bondi Pavilion

Need a reason to check out the Pav’s fabulous revamp? Here’s a baker’s dozen

Hugging one of the world’s most famous sandy shores, Bondi Pavilion has been a familiar feature of the promenade since 1929. For almost a century, the Pav (as it’s affectionately known by locals) has faithfully served the community, and now, following a multimillion-dollar refurbishment, it’s ready for its next hundred years as one of Sydney’s most versatile arts and hospitality hubs. A top-to-bottom glow-up has not only refreshed all of the pavilion’s existing facilities, but also installed a range of cutting-edge exhibition spaces and top-of-class entertainment and dining venues. So from the beach to the bar, and even dining under the stars, this summer the Bondi Pavilion should be your go-to destination for a great day or night out.

Here are 13 ways you can make the most of the new and improved Bondi Pavilion this sunny season.

So you think you know Bondi? Well think again. Local historian Lawrie Williams lifts the veil on the rich and chequered history of this beloved beach suburb on this walking tour of the Bondi Basin, setting off from the Pavilion. Learn how this area evolved from a humble land grant used for grazing cattle to the world-famous Aussie beach destination it is today, while discovering quiet corners off the beaten track.

Get fit with community-run classes

You can spy plenty of impressive bods strolling the sands of Bondi, but if you want to be one of them, the community classes at the Pav are calling. From pilates to latin dance, yoga to taekwondo, there are a range of accessible fitness and wellness classes on offer, run by local experts. The Pav provides the space, all you have to do is provide the energy. 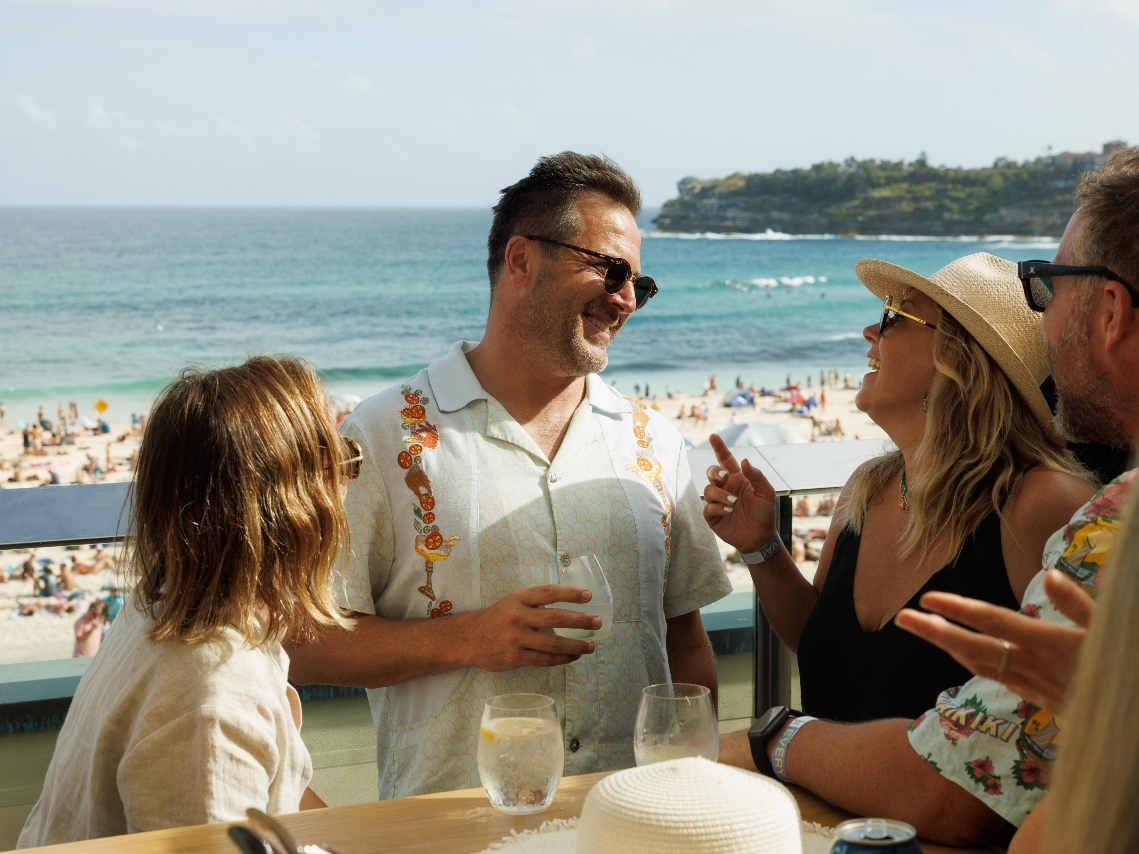 Satisfy your hunger at Glory Days

Located at the northern end of the colonnade, with uninterrupted views of the beach, Glory Days Bondi – brought to the Pav from Aaron Crinis of the Good Atelier (the team behind Glorietta, Glory Days Coffee and the Woolpack) – is the new laidback, all-day eatery channelling the sun, sea and sand vibes that are so distinctly Bondi. Tuck into café fare for breakfast, lunch and all those peckish moments in between, from 6am till 6pm, seven days a week. You’ll also find a special program of live entertainment on the terrace throughout the summer.

You may well be familiar with the much-Instagrammed views of Bondi from the famous Icebergs Pool Club, but did you know that one of the very best uninterrupted views of the beach can be found on the top floor of the Pav? Pair this jaw-dropper of a vista with refreshing bevs, live DJ sets and scrummy snacks (think buckets of prawns, kingfish ceviche and pulled pork tacos) and you have one helluva summer pop-up on your hands. Which is exactly what you’ll find every Saturday and Sunday from noon throughout the sunny season, upstairs at the Pav. 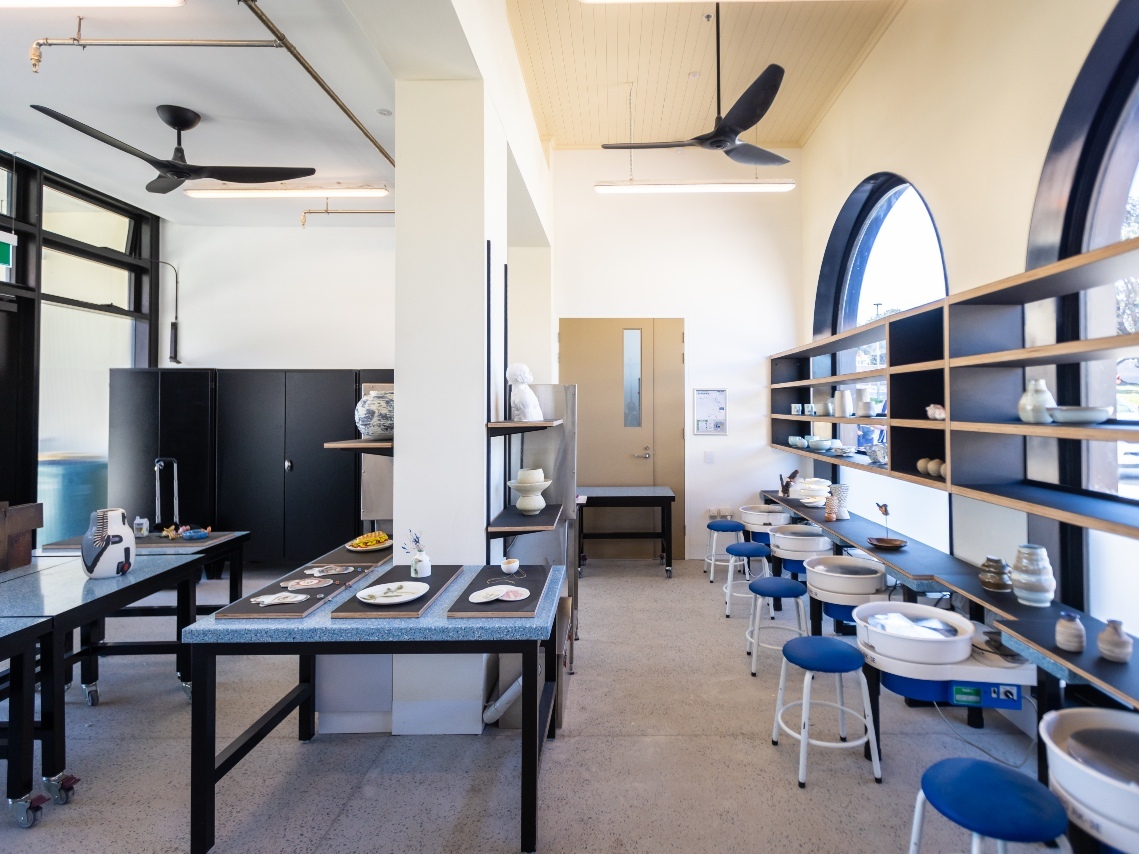 Whether you’re a seasoned potter or a newbie at the wheel, this light-filled studio at the Pav is the place to get hands-on with ceramics. Classes are scheduled throughout the year and are designed to be accessible for people of all ages and skill levels. Get to grips with hand-building, throw some shapes at the pottery wheel, and unleash your creativity with decorations and glazing techniques in a variety of relaxed one-off sessions. For those who are really fired up about clay, there are also foundation courses and ongoing workshops where you can up your skills.

Try the flavours of the coast at Promenade

Another tasty addition to the Pavilion’s hospitality offering is this new ocean-facing restaurant with a retro spirit, channelling the Pav in its ‘70s heyday. At Promenade, which opens in February, there’ll be a menu of coastal-inspired cuisines heroing local produce prepared with worldwide influences. And for those in need of a quick pick-me-up between ocean dips, Promenade also operates a Kiosk providing takeaway beverages and coffee and lite bites that are perfect for a snack on the sand. 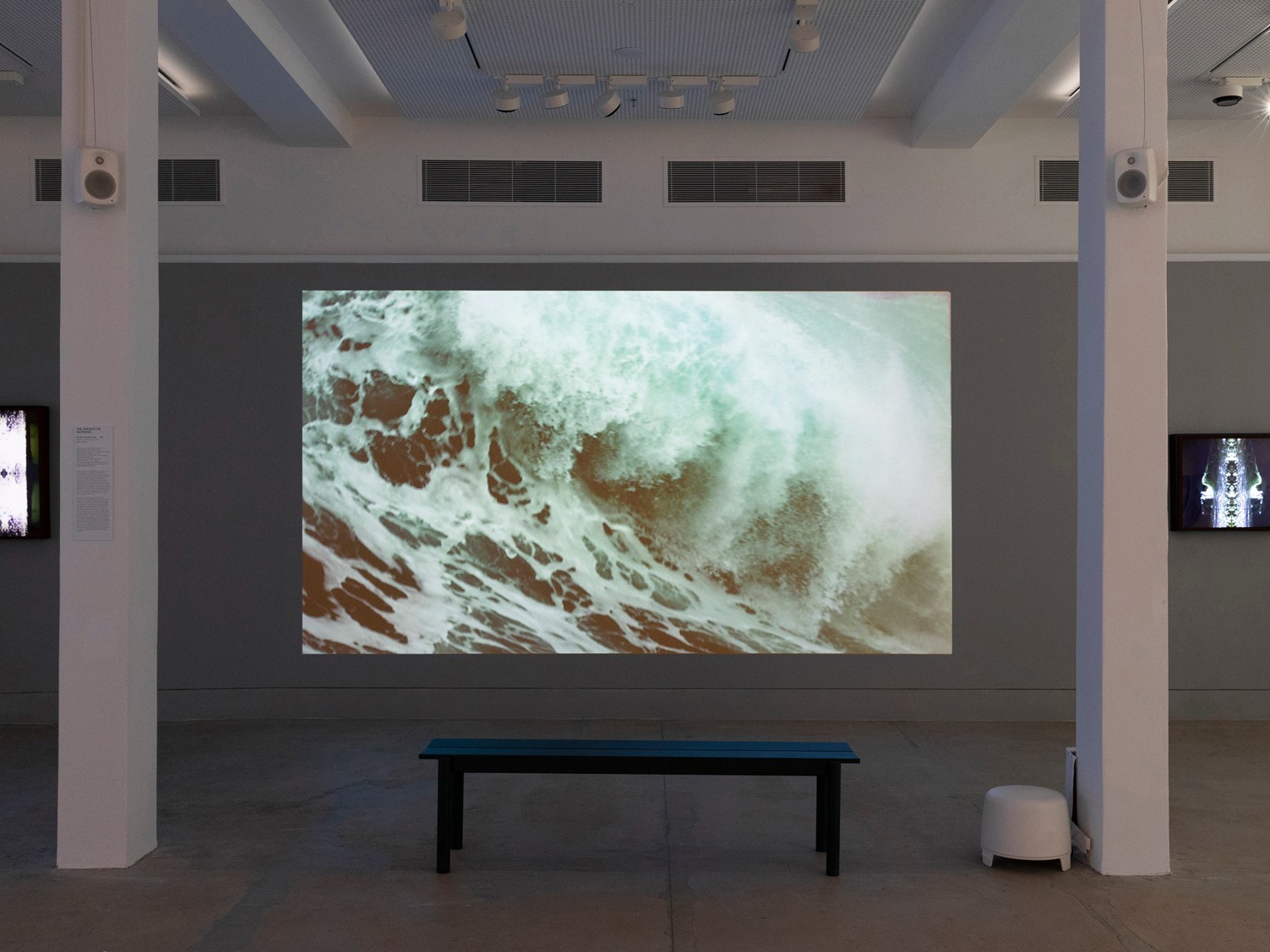 The experience of actually standing on a board as the water towers over you, braving that liminal moment between wipeout or catching the current, is something only experienced surfers truly understand. But you can now get an insight into the unique connection with the ocean felt by those who surf at the Pavilion Art Gallery’s summer exhibition. Liquid Mountains, which is showing until January 29, “considers the spiritual, the social and the sublime, as it seeks a greater understanding only possible from those poised on a board.” The gallery is open 10am-5pm daily, and entry is free.

Stock up on beachwear at Between the Flags

We’ve all been there: you’ve arrived at the beach but you’ve forgotten one of those seaside essentials. Well worry not, sun seekers – the Pav has you covered. Its new Between the Flags retail outlet has all the beach and surfwear you could want, from bucket hats to swimsuits, thongs to beach towels, and heaps more besides. Since first opening in 1994, this brand has carved out a reputation as one of the best lifestyle and beach apparel labels in Australia, so you know you’re getting quality as well as convenience when you make a purchase at the Bondi Pavilion store. 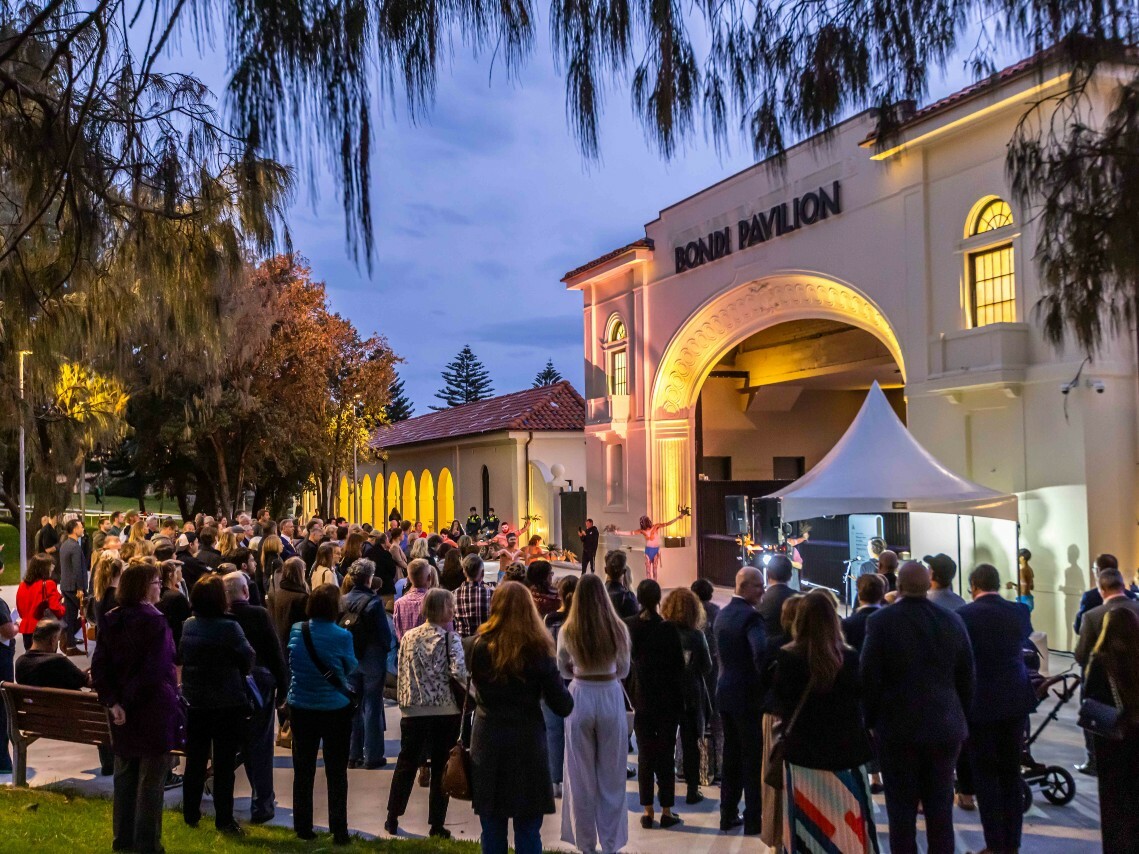 Monty Webber – surfer, writer, artist and film maker – has recently published 'Bondi Days', an account of the Bondi surf scene from the 1960s to the 2000s, and part of his forthcoming book The Autobiography of an Experience Junkie. A longtime contributor to Tracks magazine, Webber's writing focuses on the dysfunctional lives of Bondi surfers. At 6pm on Thursday January 19, Monty will speak in conversation with Tracks editor Luke Kennedy about Bondi, covering his life, from the beach breaks to the wipeouts. The event is free and includes light refreshments.

The Pavilion may have faced the sands of Bondi for almost a century, but for millennia before that the Gadigal people of the Eora Nation had a rich and complex culture here. Aboriginal elder, artist, educator and Bondi resident, Walangari Karntawarra, alongside the talented artists of the Diramu Aboriginal Dance and Didgeridoo, shares their heritage through an entertaining and interactive First Nations cultural experience and performance. Learn First Nations dance and song from experts, see examples of ancient artefacts and discover bush foods and medicines that still grow locally to this day.

Look back into millennia with Walangari’s Bondi Aboriginal Walking Tours

It may be one of the busiest suburbs in Sydney, but there’s still much to discover in Bondi, hiding in plain sight. Aboriginal elder and Bondi resident Walangari Karntawarra will help you see this area through new eyes during this gentle 90-minute walking tour. You’ll discover ancient Aboriginal Rock Carvings and traditional Aboriginal bush foods and medicines still growing wild and also hear about the history of Bondi, from its pre-historical geological formation and how the Aboriginal people used its resources, to its status today as one of the world’s most famous beaches. 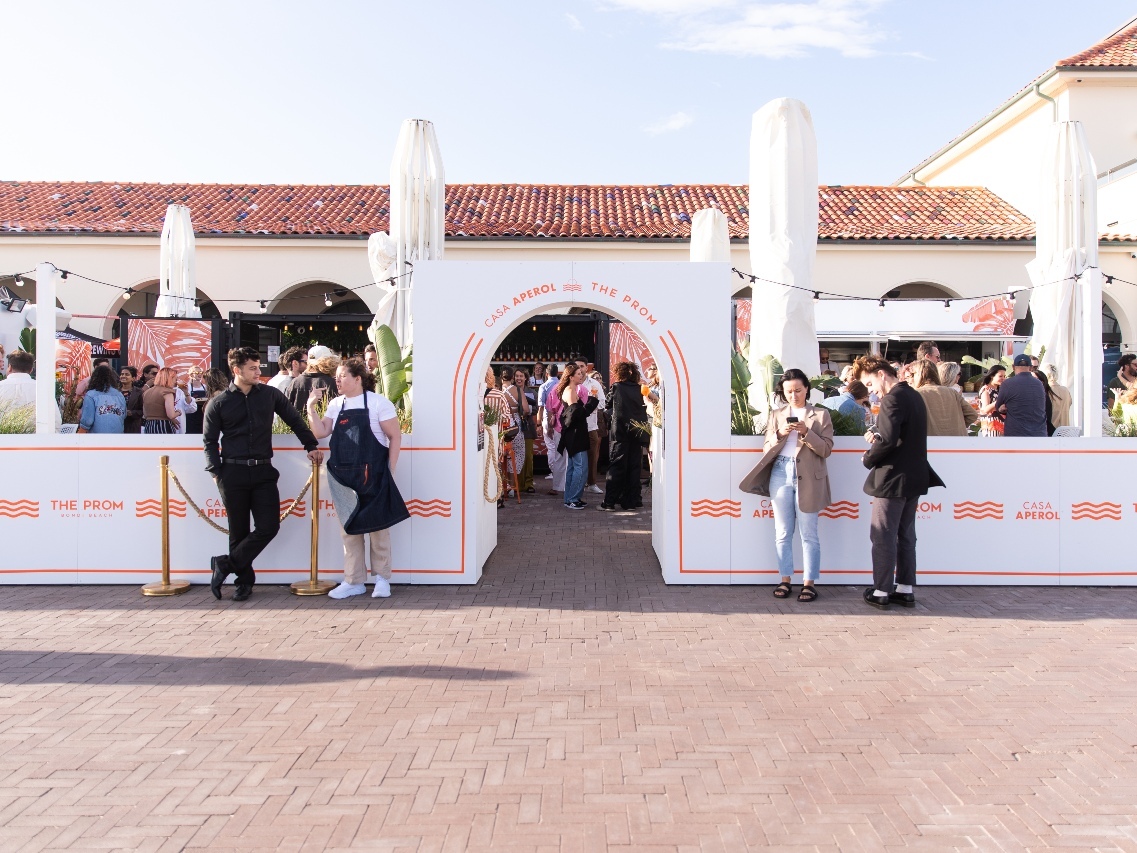 Every summer has its beverage trend, be that hard seltzer, frozé or boxtails. But there’s one evergreen summer sip that doesn’t look like going out of fashion any time soon: the ever-popular Aperol Spritz. These will be flowing every Sunday all summer long – alongside a menu of summer cocktails and Mediterranean-inspired snacks – courtesy of the Casa Aperol pop-up being hosted at Promenade. And it’s not just the drinking and eating that’ll be on point. Expect a pumping line-up of DJs who will be bringing all the right vibes for Sydney’s ultimate Sunday session. No bookings are required, so whether you want to settle in for the arvo or you just need a refreshing drink before heading back to the sand, Casa Aperol is the go.

Explore the hidden history of Bondi in the Bondi Story Room

As the centre of Australian beach culture, Bondi has attracted a lot of fascinating characters over the years. Indigenous peoples, the first surf lifesavers, female seaside pioneers, migrants, artists and surfing legends have woven their way into the history of this place. Find out about many of them via the Bondi Story Room, one of the unique attractions of the revamped Pavilion. An entire wall has become an interactive touchscreen map of Bondi where visitors can tap to learn about notorious beachwear inspector Aub Laidlaw, the tragic 'Bondi Mary' and 'Backless Betty'. The Bondi Story Room was developed in consultation with local writers and researchers and it's open every day on the ground floor.