With our Spidey-Senses tingling at the recent Spider-Man additions to Disney+, we have our friendly neighbourhood Spider-Man to thank for Marvel’s unfaltering popularity. And unless you’ve been living in an alternate Multiverse, you’d know the web-slinger is celebrating his 60th anniversary this year. So, what better time to chow down on a NYC-style slice at your local pizzeria? Why pizza, we hear you cry? Because Spider-Man will go down in history as the speediest pizza delivery boy ever.

Created by the inimitable Stan Lee and artist Steve Ditko, Spider-Man first appeared six decades ago in the pages of the anthology comic book Amazing Fantasy #15. Now Peter Parker, the loveable kid who does whatever a spider can, is part of the biggest movie franchise the world has ever seen. So chuck on your comfiest Spidey suit and watch your favourite movies, now streaming on Disney+.

It was during Tobey Maguire’s delightfully goofy and yearningly romantic tenure in the red and blue suit in Sam Raimi’s 2004 flick Spider-Man 2 – hailed by critics as one of the greatest Super Hero films of all time – that saw Parker delivering pizza. Working at the Big Apple institution Joe’s Pizza, he is given an ultimatum: deliver eight extra-large deep-dish pizzas across 42 crowded Manhattan blocks in only seven and a half minutes. Or you're fired. Ditching his scooter for his trusty webs, Spidey suits up and takes to the skies. He even stops to save a couple of kids along the way.

Whether your web-slinging proclivities lie with Maguire, Andrew Garfield or Tom Holland, it’s time to celebrate Spider-Man’s huge milestone. Here are our favourite New York City-inspired pizza joints slingin’ mouth-watering slices to chow down on in his honour. 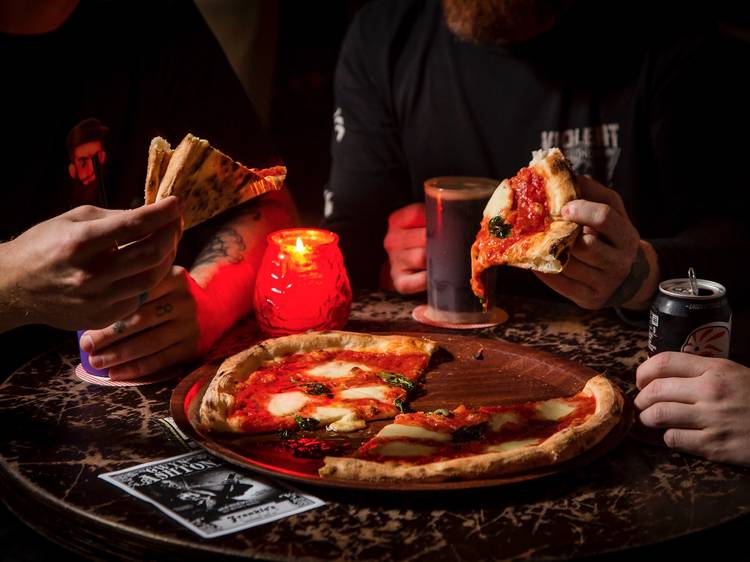 The heart of the business district is not where you’d expect to find an underground heavy metal pizza party, but Frankie’s Pizza by the Slice doesn’t much go in for the expected. There are postcards and old photos tacked to the walls; red and white tablecloths and candles in bottles; and they sure can bake the heck out of a pepperoni pizza. They’ll also sell you a slice of whatever is hot for $6, but it pays to order a full pie – you get to choose from a much broader selection, and cooking to order ensures the pie arrives just that little bit crisper and fresher. 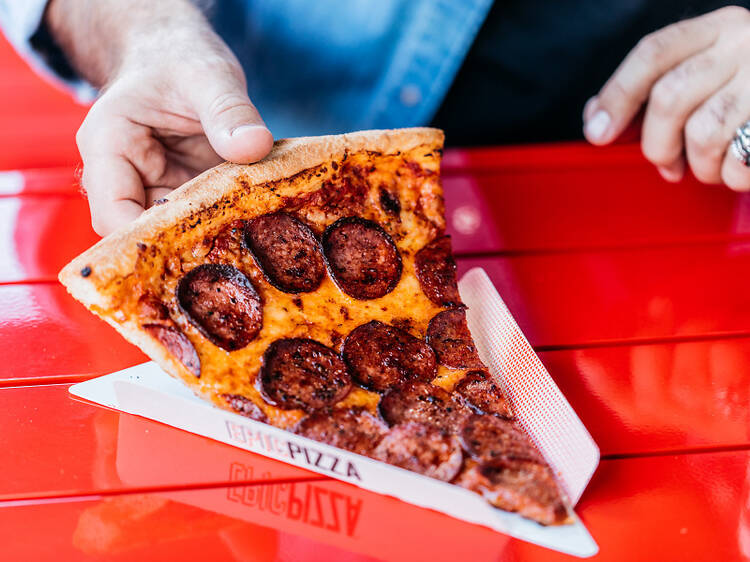 Enmore is now home to a New York-style slice shop, firing up 22- and 12-inch pies, with dough and cooking techniques taken straight from the Big Apple. These guys are proving the dough for 24 hours to improve the flavour and cooking down a rich tomato sauce to top every pizza. They also allow the oversized pizzas to cool before heating slices on a stone-bottomed oven for a crisper base. Meateaters will love the OK USA with American-style pepperoni and That’s Amore whole-milk mozzarella; while plant-based eaters can get around the vegan Don Pepe with vegan mozzarella, garlic, capsicum, mushroom, chilli, sun-dried tomato and vegan ranch. 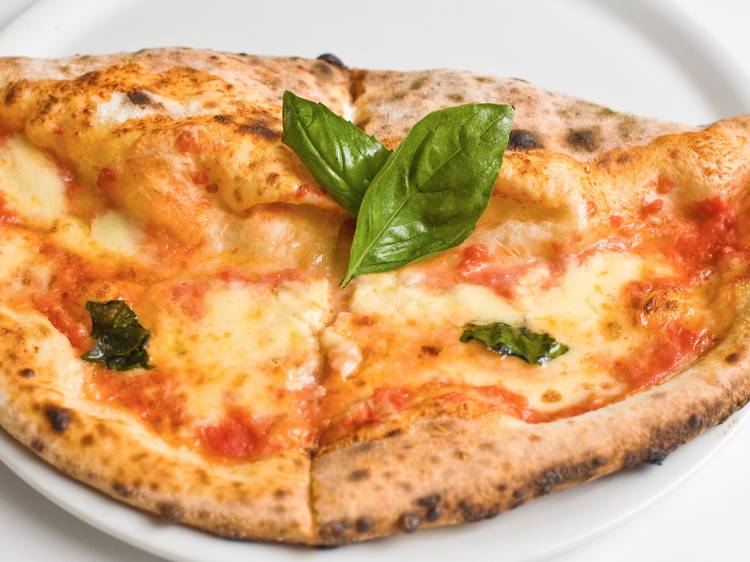 Here’s a fun fact: the shape you make when you fold a piece  of pizza in half to eat it is called a libretto. Yup, just like in the opera. And you know you’re eating a good pizza when you can fold with ease. The list here at Lucio Pizzeria is strictly classical (your margheritas, your marinaras, your diavolas), though there are a couple of house specialties, such as the Lucio. Named for chef and owner Lucio de Falco, it’s half a regular margherita – thin-based yet puffy and charred on the sides – and half a ham-and-ricotta calzone. 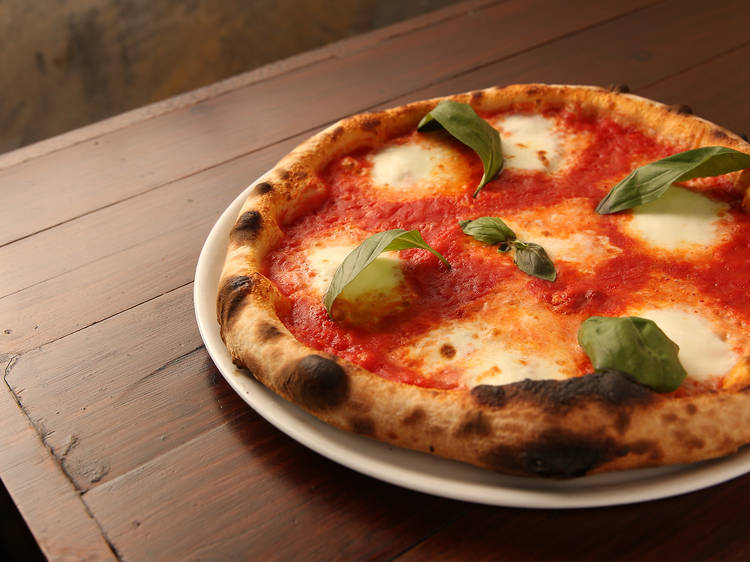 The lights are low, the chatter is jovial and the pizza is excellent at the Surry Hills arm of Bronte’s favourite pizza parlour. They have eight pizze on the menu that can be ordered bianchi (white) or rosso (red). The Brandi is as rigid as a military guard when it comes to following the rules for an AVPN-approved margherita: six orbs of DOP cheese, a vermillion tomato base and four fresh basil leaves on top. The careful layout looks like an edible quilt piece, and straight out of the oven the bases here have just enough structural integrity to get the food to your mouth without it dropping in your lap. 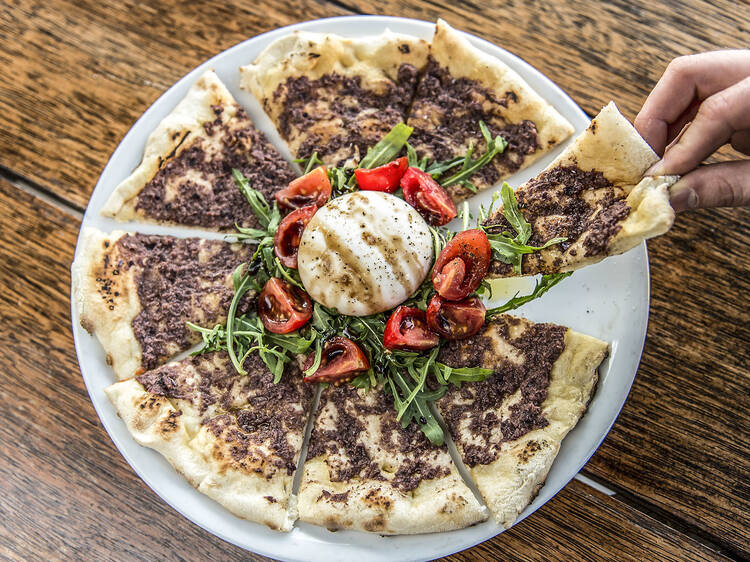 Located in the historical Walsh Bay arts precinct, Ventuno offers pizza with a side of spectacular water views. This contemporary Italian eatery does a mean slice of the good stuff, and there are ten options to choose from on the menu. It's near-impossible to pick just one, but if we had to it would be the Golosa. Topped with San Marzano, fior di latte, ham, Italian mushrooms, parmesan and – the pièce de résistance! – truffle pesto, it's a party in your mouth. Best of all, Ventuno is right near the Sydney Theatre Company, so it's the ideal spot for a sneaky bite to eat before you catch the latest production.