Oxtravaganza is when Darlo does Mardi Gras, as only Sydney’s LGBTQI+ hub can. Things will be looking a little different for Sydney’s most colourful annual festival, but for its fifth year Oxtravaganza is spilling over from one day into a two-week celebration and amplification of everything about Oxford Street and the suburbs that fabulously fringe it.

To find out more about the neighbourhood, and what has changed since last Mardi Gras, we spoke with the chair of the Darlinghurst Business Partnership, Stephan Győry. Stephan is the owner of the off-Oxford Street specialist record store named, conveniently, The Record Store. Having worked in music and vinyl stores in the area since 1996, Stephan has seen a lot of things change in Darlinghurst over the years – and some things that will never change.

“In this area there's a very strong gay and lesbian history. But the essence of that, beyond sexuality, is individualism, freedom and self expression. So that's why artists are drawn here, that's why young people are drawn here. And the shops, the businesses and the community reflect that, so I think that's what makes this place special,” he says.

The Record Store has been around for over two decades, and moved to its new location at the cusp of where Darlinghurst meets Surry Hills just two weeks before 2020’s lockdowns. At the store’s new location, on the corner of Crown Street and Campbell Streets, it's surrounded by vintage clothing stores, a bookshop, a small bar, and a gay cruising club (very Darlo).

Artists are drawn here, and the shops, the businesses and the community reflect that

Like the neighbourhood where the Record Store makes its trade, the product it sells has survived generations of change and challenges, and has become something formidably cool, even sought after. “Vinyl, it's been killed four times now, and it's still here,” says Stephan.

“If you want a relationship with music, you can't have it with Spotify, you know, and records are the last format left. Records, if you look after them, will last forever. We've got kids coming in who in lockdown have discovered their parents’ record collections, and then are bonding with their parents who are buying them turntables. Music speaks across all divides.”

While the record trade has found a new generation of collectors, all of the businesses in Darlo are this year losing a huge clientele.

“The parade is the biggest day for some businesses,” says Stephan. “It's not gonna be like a traditional Mardi Gras. We're not having any tourists, we don't have any international people.

“If you feel a connection to what Mardi Gras celebrates, then come to the area and make it your own. Come to a small bar, have dinner, go to a shop, you know, hang out. We'll be having drinks at our store regularly during the festival.”

Head to Oxford Street and surrounds between February 19 and March 7 for Oxtravaganza and browse some vinyl at The Record Store (34/277 Crown St) while you’re there. On Saturday, February 27 you can score special deals for Shop Till U Drop day (11am-6pm).

Oxtravaganza is just one of several Mardi Gras Festival events happening on Oxford Street and the pink mile that have been supported by the City of Sydney. Others include:

Promotion: Picnic Surry Hills
Pubs, cafés and venues are offering special Picnic menu deals and offers all weekend of March 6-7. Picnic in the Pubs will offer live music, entertainment and drink specials at haunts including Tilly May’s upstairs at the Trinity Hotel, the Carrington, the Shakespeare Hotel, the Dove & Olive and others. A limited-edition picnic blanket will be available for purchase from selected Picnic partners to support local community groups and charities. Mar 6-7.

Sing-a-long: Thirsty Thursdays at the Eternity Playhouse
Andrew Bukenya hosts this night of live music, feasting and revelry in the heart of Darlo as audience members and special guests are invited to get on the mike and sing showtunes. Miss Bev, Zara Stanton and Andrew Worboys will be part of this coming together of music theatre folks and fans. Eternity Playhouse, 39 Burton St, Darlinghurst. 7pm. Thu Feb 18.

Exhibition: Darlings and Dissidents
If you take a stroll along Oxford Street and its laneways and scan the QR codes you'll uncover photographs and information about the colourful history of the Golden Mile, from Indigenous peoples to razor gangs to the very first Mardi Gras. Darlinghurst. Feb 19-Mar 8.

Workshop: Queer Lyfe
This is a life drawing class where LGBTQIA+ performers are the models and anything goes. Bring your creativity and an open mind. Ching-a-Lings, Lvl 1/133 Oxford St, Darlinghurst. 7pm. $30. Wed Feb 24.

The Mardi Gras Parade on Sat Mar 6 is a ticketed event taking place at the Sydney Cricket Ground. Ticketed special events and viewing parties are taking place in and around the Oxford Street precinct. For Covid safety reasons the City of Sydney is asking that only ticket holders and reservation holders visit the area on the evening of Sat Mar 6. 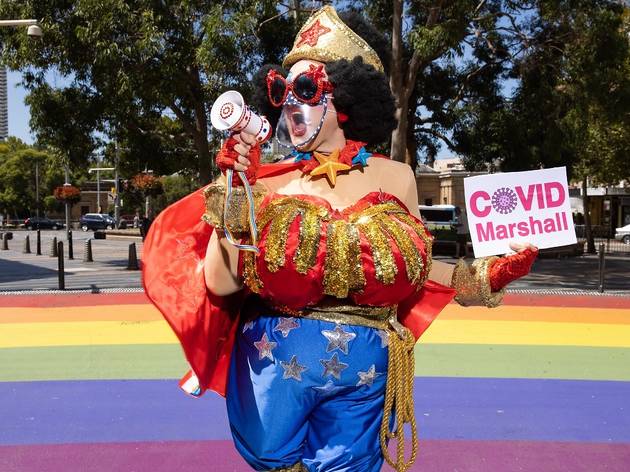