'This place is pure evil': Are you brave enough to enter Sydney’s most haunted bathroom?

The possessed plumbing in question is found within the infamous Gravedigger’s Cottage, a popular if not divisive stop on Q Station’s ghost tours. It’s so named, not because a gravedigger actually lived here (the 19th-century cottage was actually housing for doctors), but because it is flanked on two sides by the Quarantine Station’s cemeteries, and most chillingly, because the apparition of a man in a black cloak and wide-brimmed hat – the uniform of a gravedigger – has been sighted within the house on multiple occasions.

Shadowy spectres are not the most frightening thing that visitors to this ghoulish abode have encountered. The sensation of hands wrapping around the throat, of being pushed down from the chest, and of being submerged underwater, have been reported by countless people. Spiritual mediums and paranormal investigators believe an unknown woman was attacked and murdered within the cottage – drowned in the bathtub.

Hannagan knew very little of this ominous history as she entered the Gravedigger’s Cottage with her camera. Almost immediately, she got an unexpected surprise. “I sensed what felt like a thumb pressing under my chin. It was really quite painful so I had to run the hell out of there, swearing profusely,” she recalls. “There was definitely something going on with the floorboards, and by the end of the shoot, I felt prickly heat all over my body. I was running in and out of there like a madwoman.” 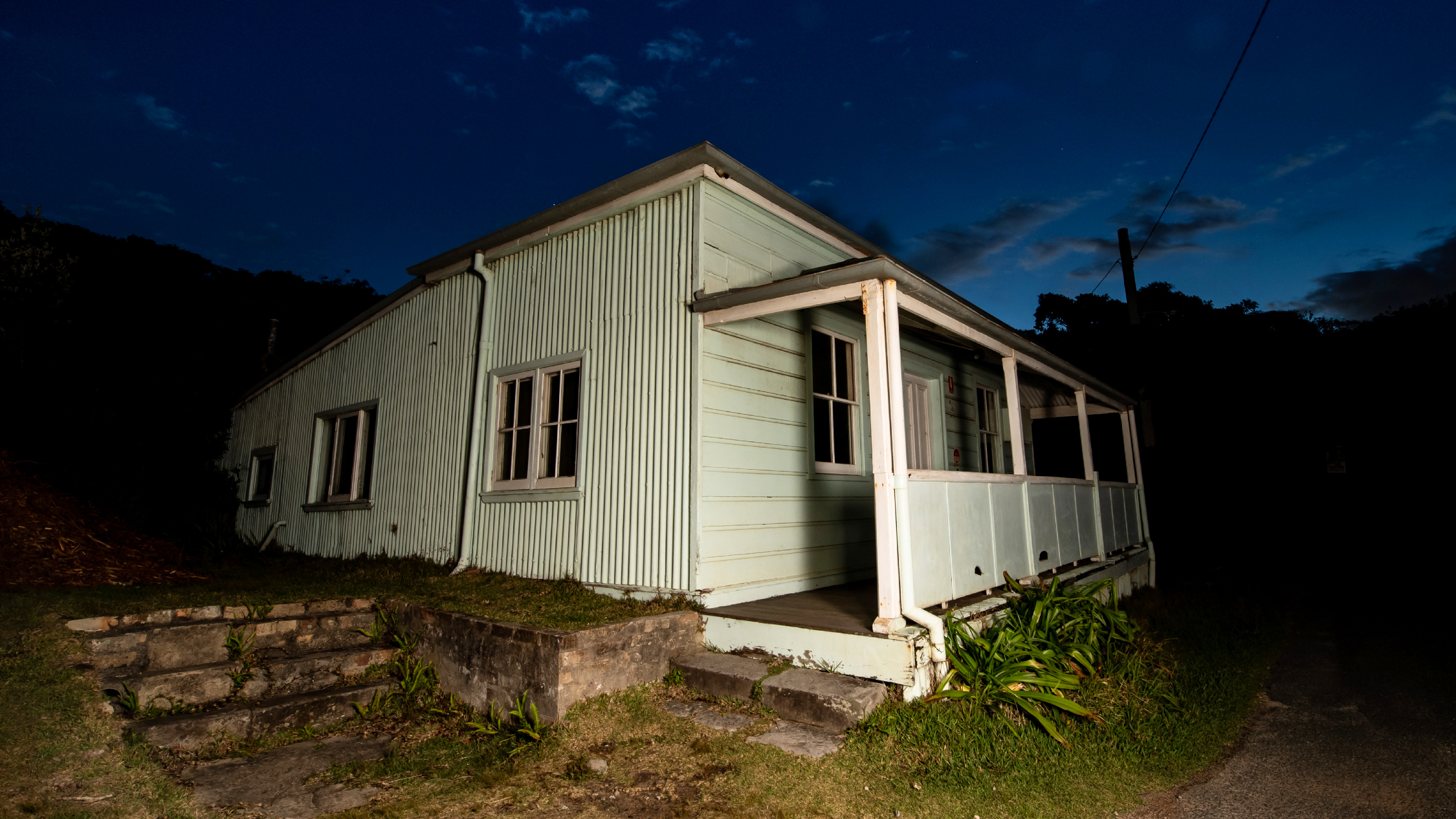 To the average person, this sequence of events would be downright blood curdling, but for ghost tour guide Melinda Minns, it’s just another day on the job. She’s seen reactions almost identical to Hannagan’s on numerous occasions over the five years that she’s worked at Q Station. “Just like so many others that come through, [Cassandra] picked up on the negative energy straight away,” Minns says with a knowing smile. “The energy is so strong, a lot of people on our tour will just walk in there and know immediately that something bad has happened here. I had one guy who walked into the bathroom, and before I’d said anything about it he said, ‘This place is pure evil.’ So many people have that same reaction.”

Including Minns herself, as she recounts in one particularly frightening experience she had while guiding a tour in the cottage. “I had a full group, and everything was going ahead quite normally. But then, all of a sudden, I felt like the floor was coming up towards me, like I was being pushed down. Then my hearing went – I could still hear people talking to me, but it was like I was underwater.”

In fact, so many people have had such strong physical reactions to the gravedigger’s cottage, from unexplained pains to panic attacks and even loss of consciousness, that it’s sometimes left off the ghost tour itinerary. “It all comes down to the guide making a call based on who is on the tour,” Minns explains. “If you have a lot of people who are clearly quite anxious or very nervous, you tend to think, ‘Ok, we might do another building instead.’”

I felt like the floor was coming up towards me, like I was being pushed down. Then my hearing went – I could still hear people talking to me, but it was like I was underwater

Not that this short-changes visitors who come to Q Station in search of the paranormal. Ghostly happenings have been reported throughout the complex, which sits perched on Manly’s North Head. Since the 1830s, ships suspected of harbouring disease have been stopped just offshore, so passengers and crew could disembark on Quarantine Beach and begin their 40-day isolation. Of the thousands who arrived at Quarantine Station, hundreds would never leave, including a sizable number during the last global pandemic, the 1918 Spanish Flu outbreak, which killed as many as 6,387 people in Sydney alone. All of that death, all of that suffering, has left an indelible mark on Q Station, believers say, with a range of hauntings – from a threatening shadow figure in the old nurses’ quarters to the handsy spectre of a flirtatious mortician known by guides as ‘Mr Slimey’ – reported throughout the grounds.

Skeptics might explain this hive of paranormal activity away as a marketing ploy to fleece would-be ghost hunters, but Minns and her fellow tour guides are careful not to imagine phantoms in every shadowy corner just for the scare factor. “You really do have to try and debunk things, because people get jumpy and there will be a tiny noise and they’ll go ‘Oh god, what was that?’. And sometimes, it was just the window. Sometimes, it was just someone walking past making the floorboards creak. We had one incident recently where a possum ran over the roof and scared the living daylights out of us. So we do try to explain as much as we can,” Minns says. “But when you get people independently experiencing the same thing in the same place, over time, then that’s something you can’t dismiss. That’s when it really makes you think that there’s something in here, that it can’t just be a coincidence.”

Q Station continued to be used as a quarantine facility until 1984, at which time the land on which it sits was acquired by the Commonwealth to preserve it as national parkland. Today, Q Station offers conference facilities, overnight accommodation, and of course its ghost tours, which include the fascinating details of this facility’s history. Or at least, the history that is officially documented. Minns concedes there are gaps in the records, but these can sometimes be filled by paranormal investigators who look to the spirit world for answers. 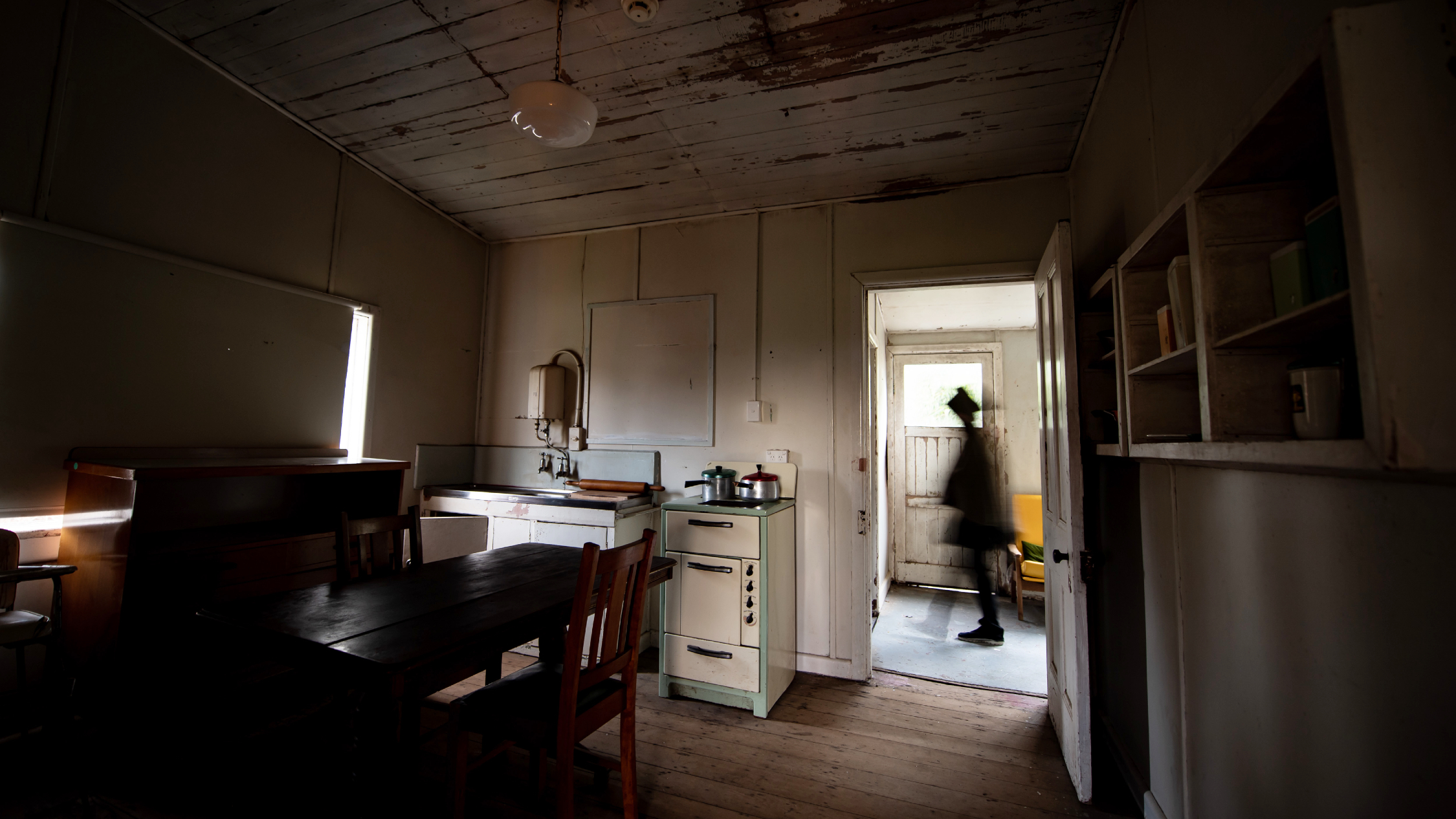 The kitchen of the Gravedigger's Cottage, where the spectre of Sam the gravedigger is most commonly seen | Photograph: Cassandra Hannagan/Time Out

The Gravedigger's Cottage is a case in point. While it is all but certain that a gravedigger would not have lived here – such menial workers would have called a tent home, rather than a two-bed house – very little is known about its former occupants. Investigators have used equipment such as a spirit box – a device that cycles through radio channels at random and can allegedly be used by the dead to communicate – to learn more from the great beyond, with some notable success. The spectre in the wide-brimmed hat, while seemingly foreboding, is a more tragic character in reality, who probably met his end within the cottage. His name is Sam and while he has not yet revealed the manner of his death, he has strongly refuted, in various ghostly ways, that suicide was the cause. The female presence in the bathroom has also been similarly reached, and has often been described as weeping, sat crouched in the bathtub.

Alongside these spooky histories, there are other, more sobering stories from Q Station’s past that have taken on a greater significance in recent months. Minns has spent the last few years recounting the all but forgotten history of the Spanish Flu epidemic, but as the world continues to struggle against the tightening grip of a similar once-in-a-century health crisis, the commonalities between the two have been increasingly startling for her. “Just like today, the doctors and nurses were on the front lines – particularly the nurses, who would have to work long hours and support these poor dying patients. They would be the only ones there to hold their hands as they passed, because they weren’t allowed visitors. It’s always been quite heartbreaking to think of what they would have gone through, but seeing the reality for medical professionals in the world today, especially in countries where hundreds are dying daily, it really does bring home what a remarkable, selfless thing it would have been to work here a century ago.”

Q Station is currently taking bookings for its ghost tours which run Thursday to Sunday. Tickets from $55 per adult.

You ain't 'fraid of no ghost? 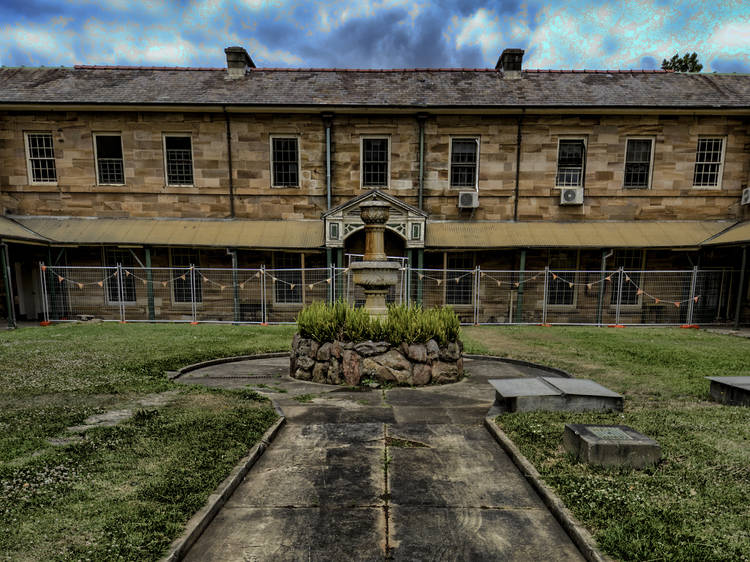 Haunted sites you can visit in Sydney

These former insane asylums, abandoned roads, converted gaols and chilly tunnels may not appear to be the stuff of nightmares in the sensical light of day, but one too many shadowy coincidences coupled with gruesome histories beg to differ.