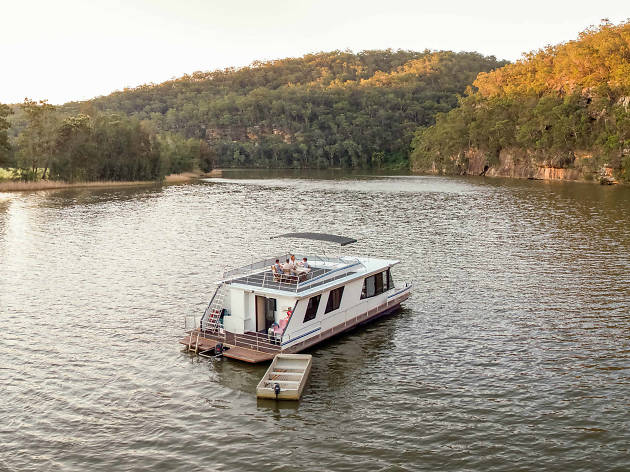 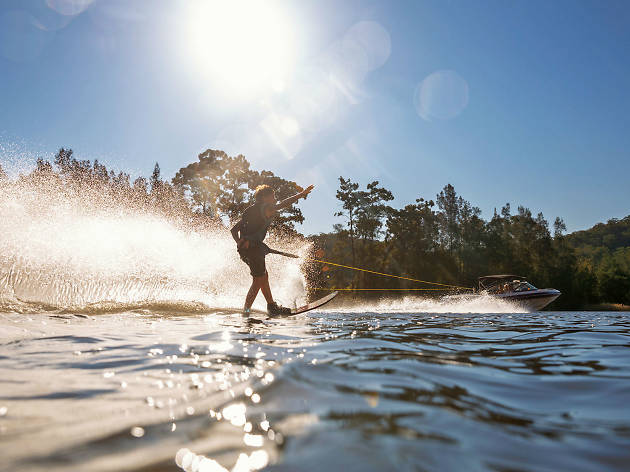 Wisemans Ferry is a great place to base your weekend away in the Hawkesbury. Less than 90 minutes’ drive northwest from the Sydney CBD, this historic little town was founded by a former convict, Solomon Wiseman, who in 1827 started a business ferrying passengers across the Hawkesbury River as part of the Old Great North Road between Sydney and Newcastle. Today, the free ferry service – the oldest in NSW – transports cars across the sleepy stretch of river 24 hours a day.

With a population of a mere 220, the town is surrounded by tall sandstone escarpments, nestled within the Dharug and Yengo National Parks. It’s here that you can hire a houseboat, take advantage of the river for watersports, and hike the convict trail to discover relics of the convict-built road. Here are our wise picks of Wisemans Ferry... 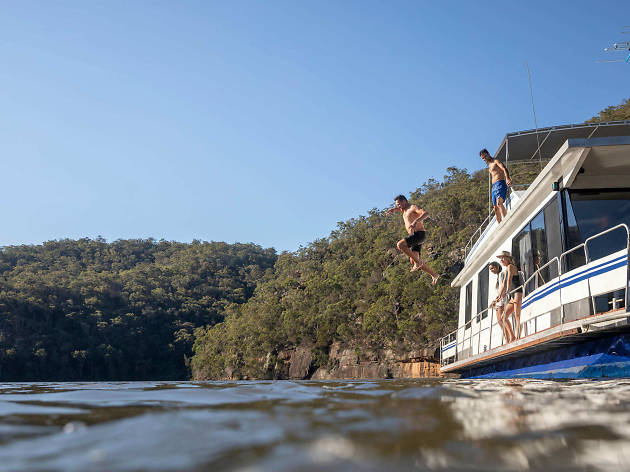 A houseboat on the Hawkesbury is one of those classic Sydney getaways everyone has thought about doing. But how does it actually work, do you need to be a practised mariner, and what’s it like? Able Hawkesbury River Houseboats have been renting houseboats since the 1980s and can rent you everything from a kayak up to a luxury houseboat for ten people. You don’t need any kind of licence to pilot a houseboat; you’ll get a full briefing on how to use it before you leave the marina, and they’ll also explain how far you are permitted to go in each direction (it depends on what size boat you rent). Banish those Cape Fear thoughts: staying on a houseboat is a wonderfully serene getaway, perfect for fishing, swimming (the larger boats have ladders into the water), and national parks to stop off and explore. Along the river you can also find opportunities for waterskiing and wakeboarding, golf courses, native birds and animals to spot, and more. If you don’t feel like leaving the houseboat they can organise catering for you, or a local fisherman to deliver a batch of freshly caught prawns.

So what are the houseboats like? There are ten different models and the smallest, an Aquavan 2-4 berth, has two couches that convert to double beds, cooker and barbecue, fridge, shower/toilet and small bow and stern decks – it’s easy to handle and a lot of fun for two people (or three-four who don’t mind a squeeze). That one starts at $420 for a night and $950 for six nights. At the other end of the scale is the Five Star Luxury Spa, which has five double bedrooms with ensuites and TVs; a heated ten-person deck spa; kitchenette with dishwasher; loungeroom, laundry, air conditioning, barbecue, and outdoor stereo system. That one will starts at $3,980 per night or $6,860 for six nights. Like everything, prices are seasonal, and the longer you stay the better the deals. 3008 River Rd, Wisemans Ferry 2775. 02 4044 0364. 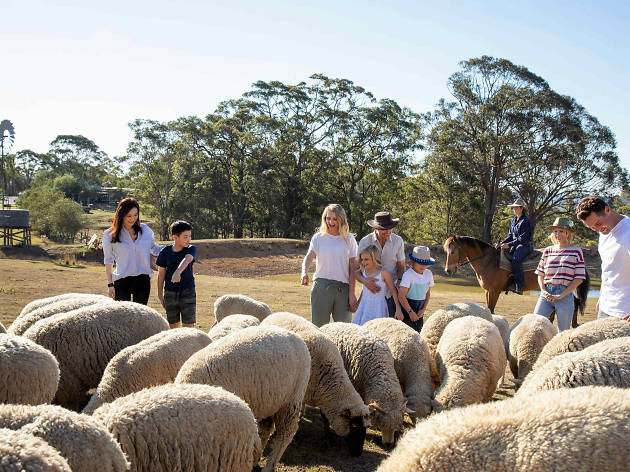 If you’ve ever craved the rustic life of a farmer you can get a taste of it at Tobruk Sydney. This sheep station and homestead is designed to showcase the outback homestead experience. A stockman on horseback greets visitors on arrival. There’s billy tea and damper around the campfire, followed by a working dog demonstration and a live sheep shearing demonstration. A hearty two-course lunch in the licensed Woolshed Restaurant is included with entry, followed by an afternoon of whip cracking and boomerang throwing demos – you’ll get to try your hand at both under the tutelage of experts.

Go one better and stay on the farm in a large country homestead suitable for up to 12 people or three families. The accommodation comes with large central dining and lounge rooms, three double bedrooms and bunkroom, fully provisioned kitchen, wrap-around balcony and barbecue facilities. The view from here takes in rolling hills, valleys and Blue Mountains peaks. Rates start at $70 per person per night (five-person minimum) and include access to the Outback Show (usually $39-$49). 5050 Old Northern Rd, Maroota 2756. 02 4566 8223. 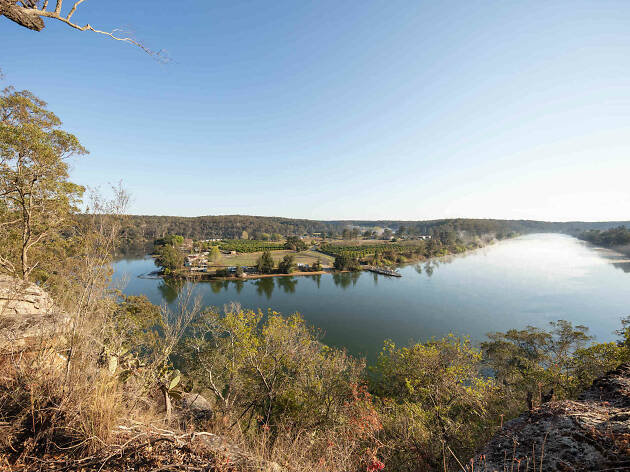 The 240km Great North Road was built between 1826 and 1836 to link Sydney and Newcastle. Hundreds of re-offending convicts, many in leg irons, toiled to build it, and relics of the original road – retaining walls, wharves, culverts, bridges and buttresses – remain at various spots along the trail, which begins in Five Dock and extends inland to Wisemans Ferry, Cessnock, Maitland and finally Newcastle.

From Wisemans Ferry, take the main ferry across and drive to the Thomas James Bridge, a small bridge that happens to be the oldest on mainland Australia (1830). On the other side is the start of the Devines Hill track – a scenic section of the Great North Road that is closed to traffic and affords a fascinating bike ride or two-hour walk. Climbing the hill you’ll encounter hand-cut drains, towering buttresses and walling, Hangman’s Cave and the site of an old stockade, culminating in an impressive sandstone bridge ruin, the 1930 Clares Bridge.

Further afield, the Bucketty Site is an excellent historical walk well worth the one-hour drive via Wisemans Ferry Road to the intersection of Geroge Downes Road and St Albans Road. Bucketty Site is an abandoned loop of the Great North Road, with many elements of the original convict road, culverts, the remains of a bridge, walling, road surface, side cutting and square-cut drains. 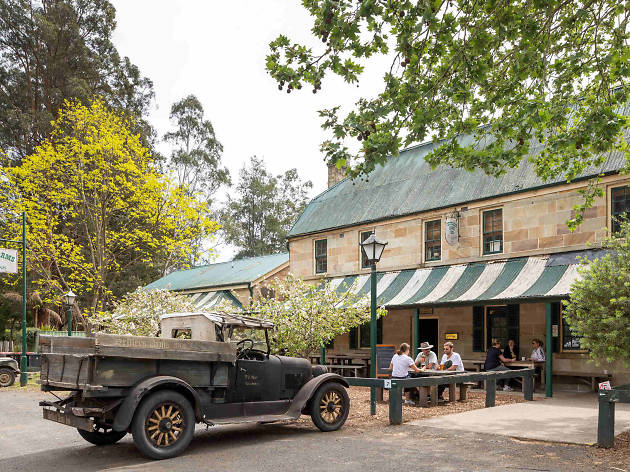 From the Devines Hill trail it’s a 25 minute drive along Settlers Road to the historic village of St Albans on the banks of the Macdonald River. The village was founded in the 1830s as a place where farmers could load their produce for shipping down the Hawkesbury River to Sydney, and in 1836 John Sullivan built the two-storey sandstone house facing the river. The inn became a stopover for Cobb & Co stagecoaches, and to this day offers accommodation in four quaint double rooms with ensuite overlooking the courtyard. The inn is open every day, with lunch available daily and dinner served Friday to Sunday, and live music in the rear garden on Sunday. Landmarks of interest in St Albans include the Macdonald River Bridge, the St Albans Anglican Church, Price Morris Cottage and the Courthouse and Police Lockup. 1 Wharf St,
St Albans 2775.