The 14 best airports in the world

Dreading your layover? Don’t. The best airports in the world are destinations themselves, with gardens, museums and more

The dreaded layover. What’s that, eight hours to kill? In an airport? Yikes. The romance of The Terminal quickly wears off in a blur of uncomfortable seats, stale sandwiches, and those internal discussions about whether it is okay to drink a beer at 8am in the morning. You’re at an airport, and time is an abstract concept. As for the rest? Luckily, not all airports are created equal; some are better than others.

The coolest airports in the world understand the needs of the modern traveller. Why wouldn’t they? There’s absolutely no reason why any airport worthy of the name shouldn’t be home to an indoor garden, an art museum, a massive waterfall or anything else. At the very least, it should have a wide variety of food and drink options and some pretty friendly staff, right? Right. Some of these airports are so awesome that they are becoming destinations in their own right, which is an extremely strange sentence to type. Eight hours to kill in the airport? Forget the booze; let’s get exploring. Here are the best airports in the world according to us.

RECOMMENDED: Full guide to the best things to do in the world

Best airports in the world 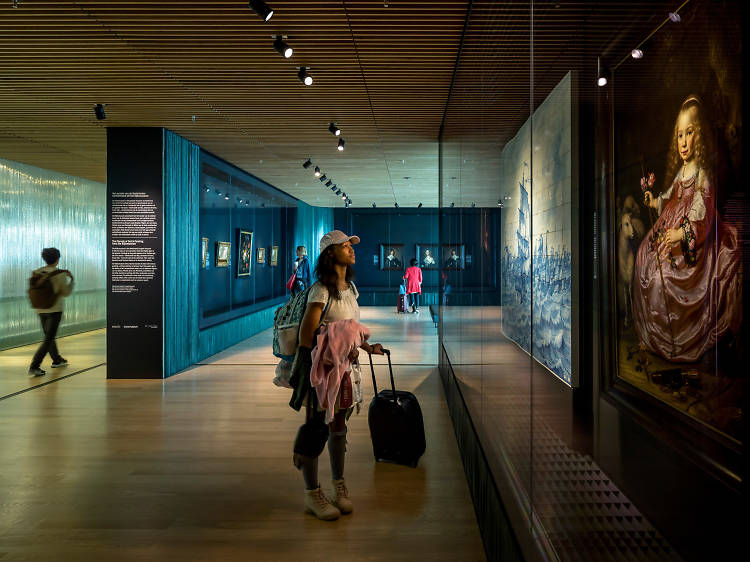 Millions visit the Rijksmuseum every year, but did you know you can also check out paintings from the Dutch Golden Age inside Schiphol airport? The museum has an annexe here, with pictures on regular rotation from its collection. This being an airport, you can also look at old planes: head to the Panorama Terrace at Departures Hall 1 to get close to the runway and inside an old KLM Fokker 100.

Discover the best things to do in Amsterdam 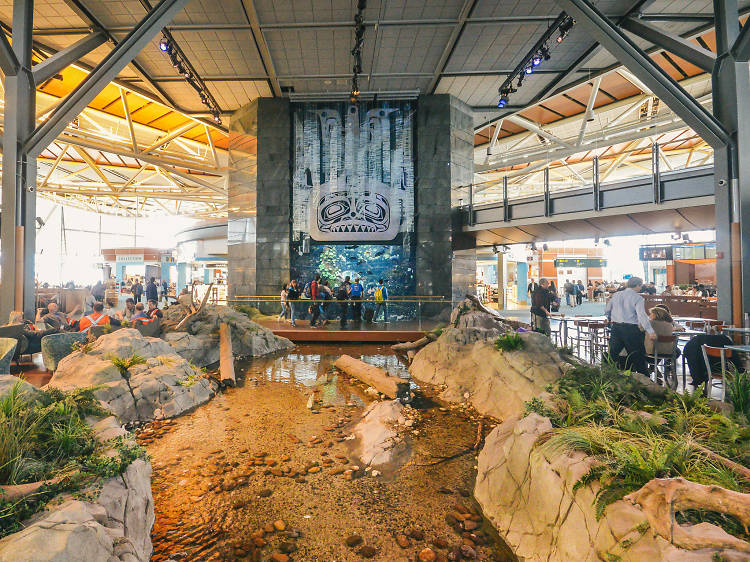 2. Get a dose of nature in Vancouver

You’ll find one of the largest living walls in North America on the exterior of Vancouver International Airport’s Arrival Terminal. Standing 18 metres high and a whopping 12 metres wide, the wall features more than 25,000 plants with a built-in irrigation and feeding system. Not enough nature for you? A permanent Vancouver Aquarium exhibit is home to more than 20,000 marine animals and plants native to British Columbia. That means wolf-eels, sea cucumbers and anemones in every shade.

Discover the best things to do in Vancouver 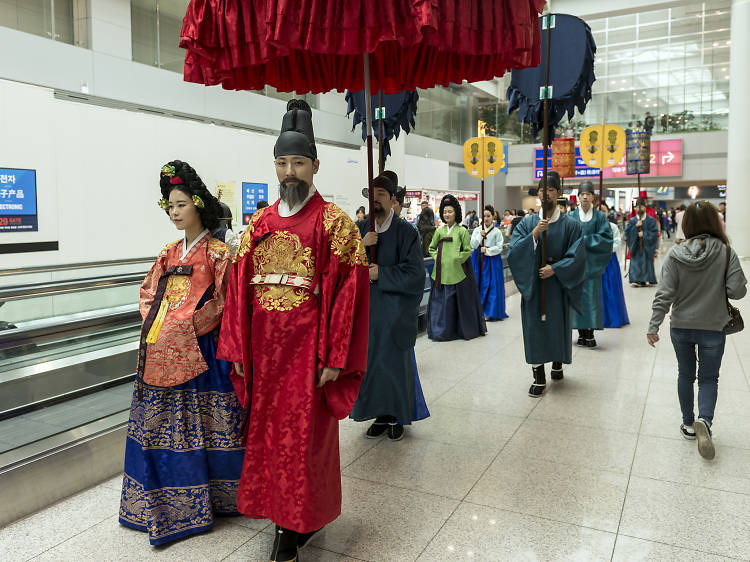 Those with extra-long daytime stopovers at Incheon International Airport can book on to free tours of the Seoul city region – but if you’re not here for that long, Korean culture will come to you instead. There’s a cultural performance every day of the year on the stage of the Millennium Hall in Terminal 1, along with classical or K-pop concerts five times a day. Over on the third floor of Terminal 2, a masked dance performance takes place three times a day.

Discover the best things to do in South Korea 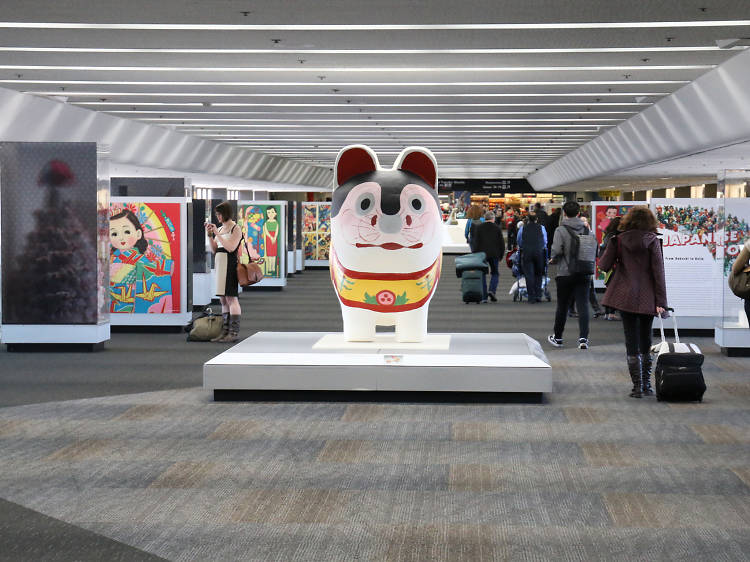 4. Catch an expo in San Francisco

Nothing makes the time go by like perusing some art, right? San Francisco International Airport (SFO), in collaboration with the SFO Museum and the San Francisco Arts Commission, displays a rotating collection of work and exhibits at the airport’s very own museum. Travellers can catch a documentary or short animated film in the ’video arts’ section, as well as occasional exhibitions. Head to the Departures Level of the International Terminal for free entry.

Discover the best things to do in San Francisco 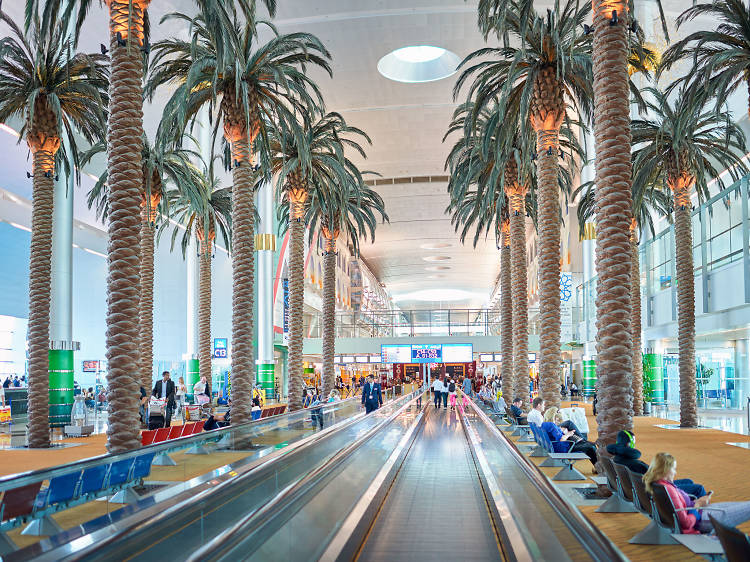 5. Netflix and chill in Dubai

Amazingly, the world’s busiest international airport rarely feels crowded – and with some of the fastest free, unlimited airport wifi in the world, Dubai International Airport is a great place to grab a burger and crinkle-cut fries (thanks, Shake Shack!) and watch a movie on Netflix. Afterwards, head to Terminal 3 to take a free shower and chill in the zen garden. Then mosey over to the Dubai International Airport Hotel, where you’ll find a gym, spa, jacuzzi and pool (though, sadly, these perks don’t come for free).

Discover the best things to do in Dubai 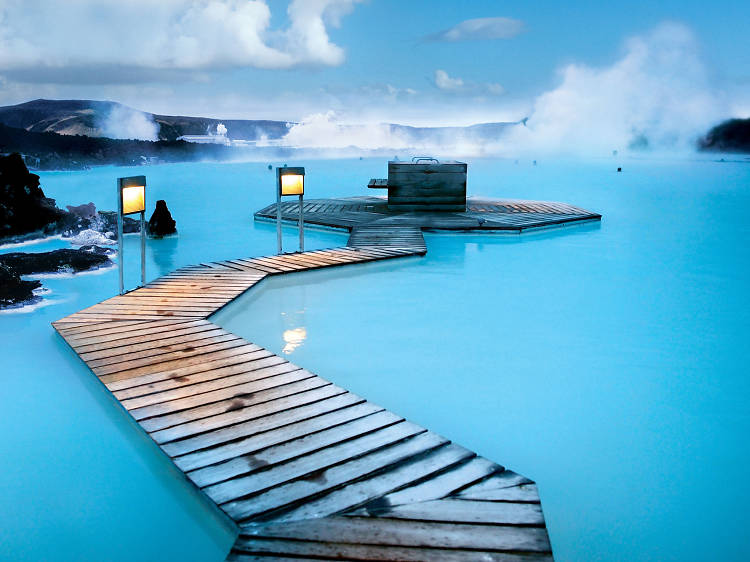 6. Take a dip in a volcanic lagoon in Iceland

Passing through Reykjavik’s Keflavík Airport? Here you’re only a 20-minute bus ride from the famous Blue Lagoon – so why not go for an early-morning soak? The airport is small, but you can’t beat its laidback vibe and incredible shopping. Sample Icelandic specialities at Nord, which serves fresh char fish and local beers, then hit the shops to get your hands on liquorice, a handmade wool sweater or products from the Lagoon.

Discover the best things to do in Iceland 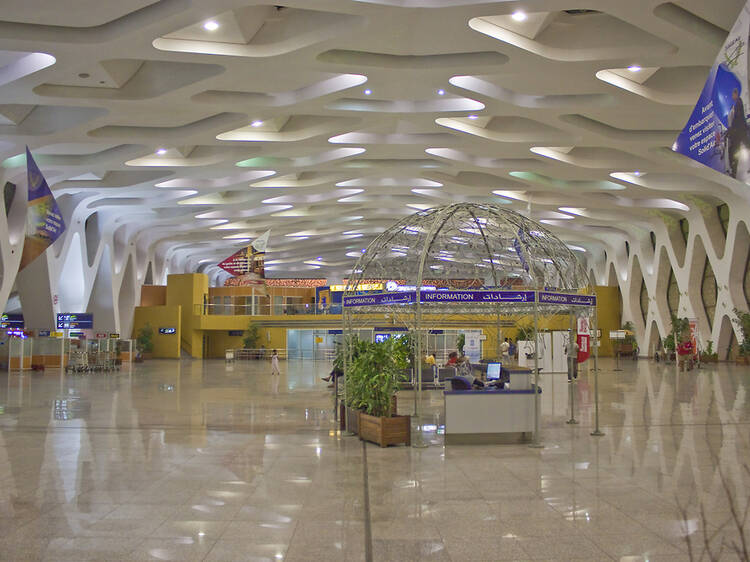 7. Discover a love for rhombuses in Marrakech

In a world increasingly enthralled by air travel (despite all the, you know, ecological damage), it remains frustratingly disappointing how few airports put serious effort into designing the buildings. We’re talking aesthetics, of course, and no such frustration exists at Marrakech’s Menara Airport. A frequent honours winner at ‘Most Beautiful Airport’ awards, this stunning structure was designed by Swiss architects E2A Architecture. You’ll get a new appreciation for rhombuses and triangles at this one, that’s for sure. 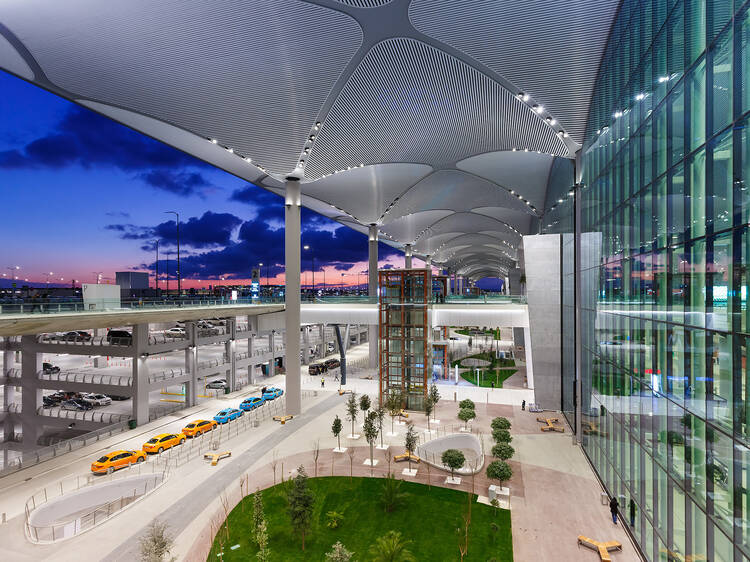 8. Get onboard with the hype in Istanbul

Opened amid much fanfare in 2018, Istanbul Airport was designed to announce Turkey to the world, a shimmering hub for the ever-beloved Turkish Airlines. It hasn’t been plain sailing of course, but Istanbul Airport is one of the best airports on the planet for long layovers and transit waits. The world’s largest terminal under one single roof offers plenty of opportunities to stretch the legs (gotta get those steps in), while the food and drink options are exemplary. The place is strikingly beautiful, so there’s plenty of beauty to stare at while you wait for that connecting flight. 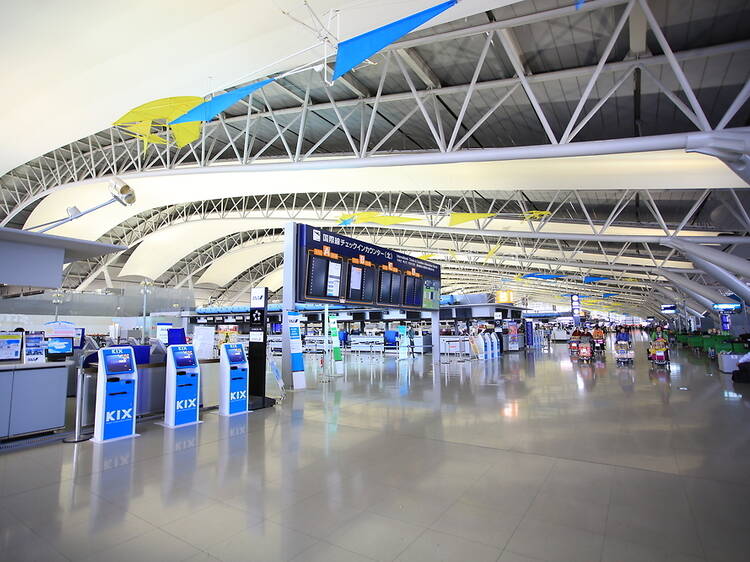 9. Enjoy an artificial island of excellence in Kansai

The closest international airport to Osaka, Kyoto and Kobe just so happens to be located on an artificial island in the middle of Osaka Bay, which should be enough to gain it significant attention straight away. Throw in a bevvy of awards for the world’s best airport staff, and the reasons to visit Kansai International Airport are stacking up. Kyoto is the most romantic city in Japan, after all. Kansai’s Terminal 1 was designed by Italian architect Renzo Piano and just so happens to be the longest terminal on the planet. 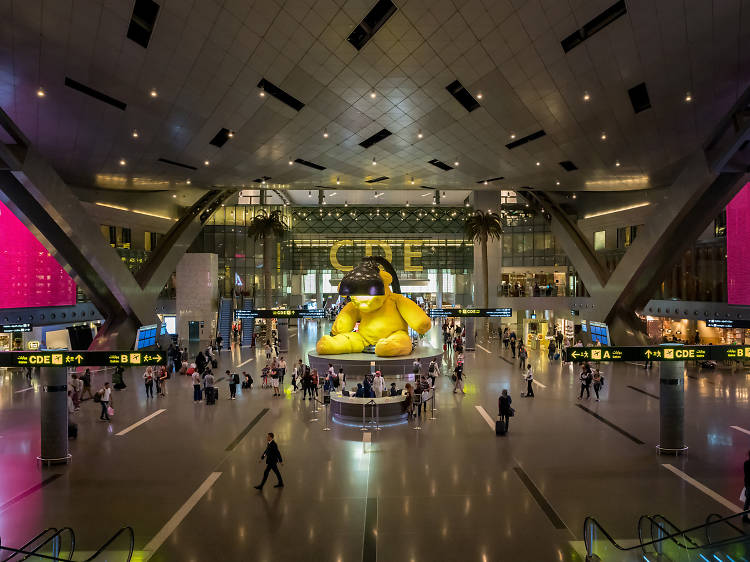 10. Boggle at epic artworks in Doha

Hamad International Airport in Doha is like something straight out of the future, with high-tech features including biometric check-in (which uses your face as your boarding pass). But perhaps most talked-about of all is the ‘Untitled Lamp Bear’, a giant sculpture by Swiss artist Urs Fischer in the airport’s grand foyer. 10 other in-your-face works are spread around the airport, including ‘The Playground’ by Tom Otterness.

Discover the best things to do in Doha 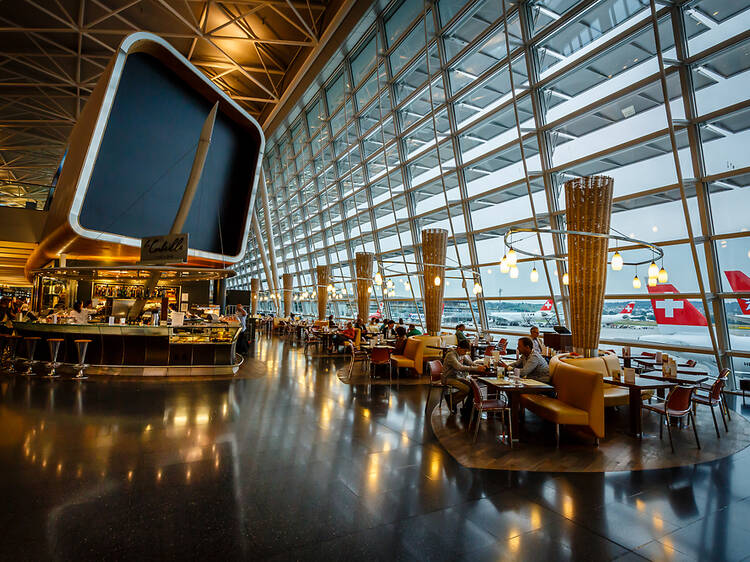 11. Embrace an award-winner in Zurich

What is it that makes Zurich International Airport so beloved? The answers won’t surprise you, as the airport ticks almost all of the efficiency boxes that Switzerland seems to check off in its sleep, from health and safety regulations to an ever-increasing roster of bars and restaurants. It is also one of the world’s frontrunners in the field of climate protection, although it does feel somewhat strange saying that about an airport. Zurich is an 18-times winner of the World Travel Award’s gong for Best Airport, which says a lot. 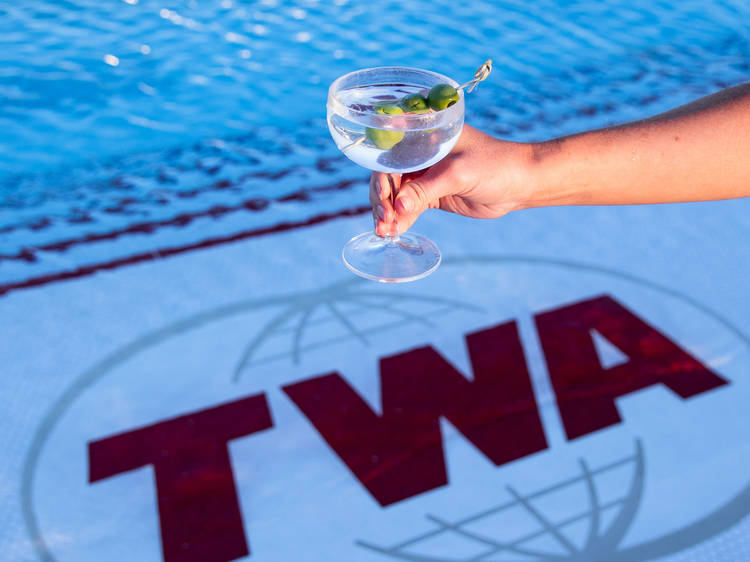 Just outside John F. Kennedy Airport’s Terminal 5 in the old TWA Flight Center building, the TWA Hotel is a retro-chic masterpiece. Its ’60s architecture makes it worth a visit alone (it was inducted as an official city landmark in the ’90s), but now the building also holds 500 hotel rooms – plus a whole room dedicated to the game Twister. But the real must-do is grabbing an Old Fashioned at Connie, the hotel bar within a refurbished Lockheed L-1649 Starliner aircraft. Like all plane trips, make sure to book well in advance.

Discover the best things to do in New York 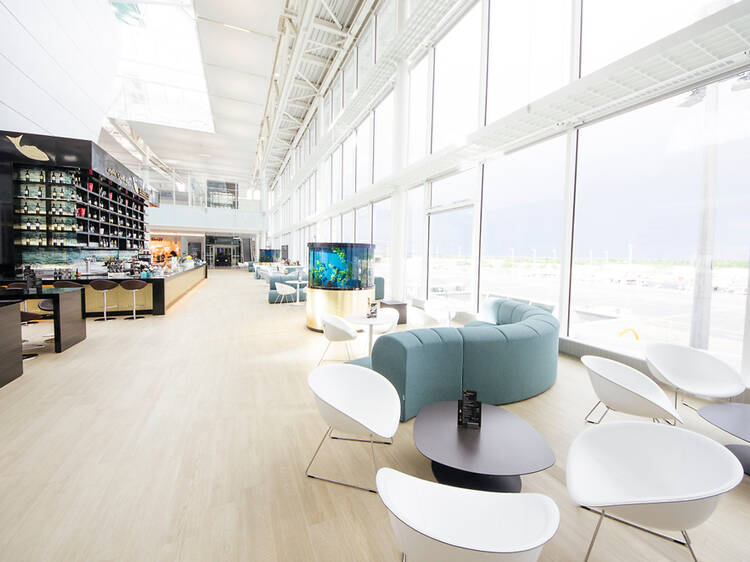 13. Shop till you drop in Munich

A city within a city with all the shopping one could need, Munich is one of the world’s great shopping airports. Why you need to do some shopping at the airport is another question entirely, but hey, you’re here now, might as well spend some of those Euros, right? There are more than 150 shops at Munich Airport, covering everything from the expected (souvenirs, duty-free goods) to Bavarian bread, hiking gear and more. A proper shop-til-you-drop experience, although don’t forget to get on the plane. 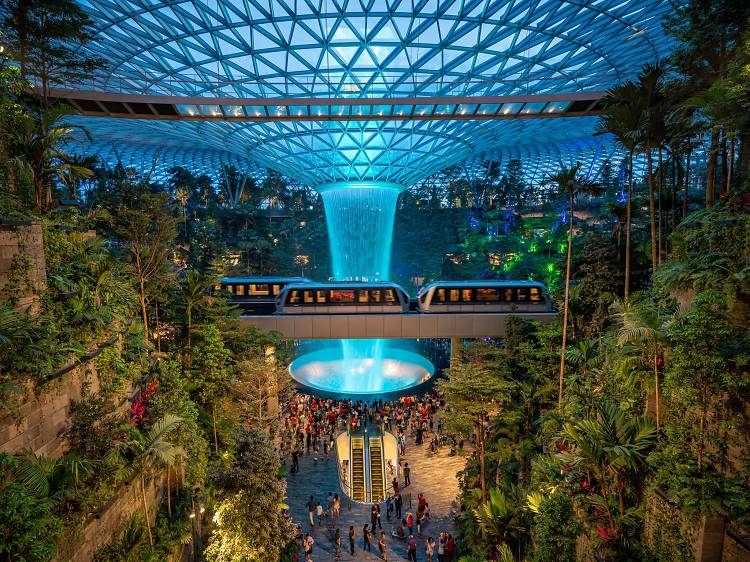 14. Get lost in an indoor jungle in Singapore

Changi is the airport of your dreams. It has so much to do, so many good restaurants and shops, that locals actually come here to hang out on the weekend, and travellers deliberately book an extra-long layover. In 2019 the airport opened the Jewel extension: its most impressive addition yet, including the world’s largest indoor waterfall and dozens of new restaurants. You’ll want to get up out of your free massage chair to visit the multi-level garden and food hub – though, word to the wise, it can get crowded. Store your luggage somewhere so you can wander free across the Canopy Bridge and through the Hedge Maze. Why can’t all airports be like this?

Discover the best things to do in Singapore 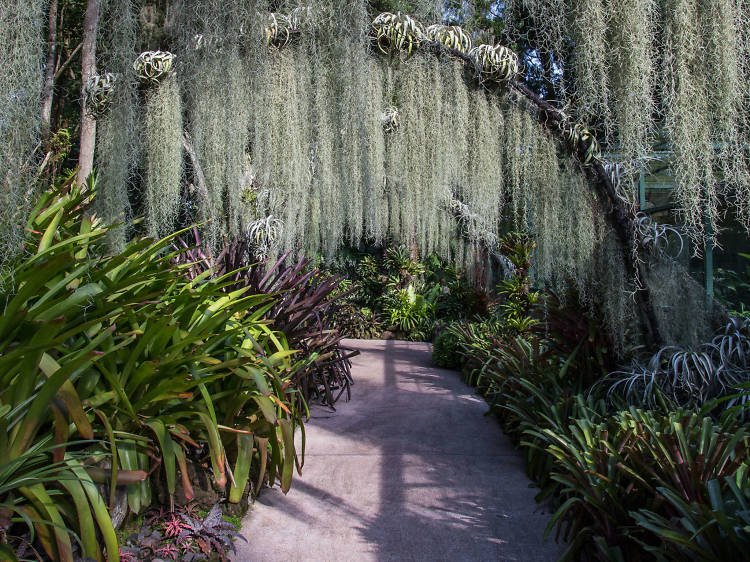 The best botanical gardens in the world

If you treat your tiny apartment like the Hanging Gardens of Babylon, it makes sense to get inspired by the great outdoors on your next getaway. And while you can get to grips with a region’s history through its museums and galleries, you’ll really see where it all started by getting up close to its native flora.