Here in Boston, we don't have too many months of favorable weather, which is why we never take a beautiful day for granted. While the city boasts plenty of great restaurants with outdoor seating, there's something wonderfully old school about going on a picnic. The best part? You don't need a reservation—just grab a blanket, pack up some food or order takeout and find your way to one of the most peaceful picnic spots in Boston. You'll find them hiding in Boston parks and gardens, outside of cultural landmarks and along the waterfront. The fresh air and city views are on the house!

Note: Not all public spaces are currently open. Check ahead before you go and stay safe by wearing a mask and practicing social distancing. 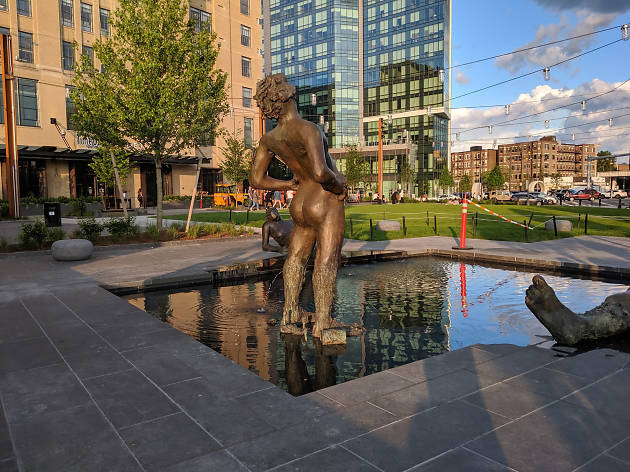 Like some variety when you go out to eat? Time Out Market Boston has you covered. Boston's first contemporary culinary hub boasts a tantalizing variety of curated food offerings, two top-notch bars and lots more — and everything's available to go. There are enhanced safety measures and a 6,000 sq ft, sun-splashed patio, but if you want the full-on picnic experience, you can plop down on The Green at 401 Park, the comfy lawn out in front of the Market, or just take your treats on a short walk to the Back Bay Fens or Comm Ave Mall.

The best picnic spots in Boston 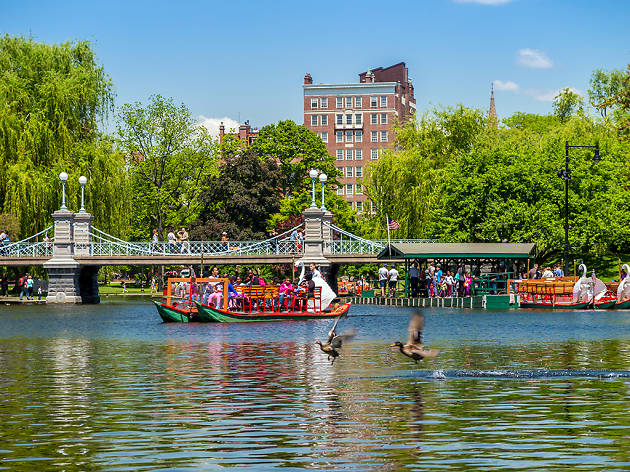 It doesn't get any more scenic than the Public Garden and Boston Common—the USA’s first botanical garden and first public park, respectively. Latter-day uses include festivals and rallies, concerts and fairs. Stop by any one of a number of quality eating spots nearby to grab provisions, e.g. chef-curated sandwiches from the Parish Cafe or gourmet Italian treats from Eataly. 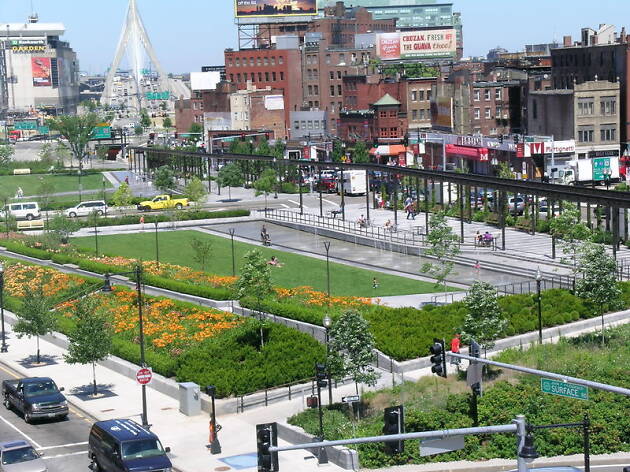 This verdant, mile-long ribbon of grassy parks and outdoor resting places invites the weary traveler (or office warrior) to stop and take a moment to appreciate the city’s fleeting sunshine. A variety of eating and drinking spots — some seasonal, some transient — keep visitors satiated. There are also periodic festivals, events, and parades located on or near the park. Grab treats from Quincy Market or the North End; maybe pizza from Galleria Umberto or provisions from Bova's Bakery. 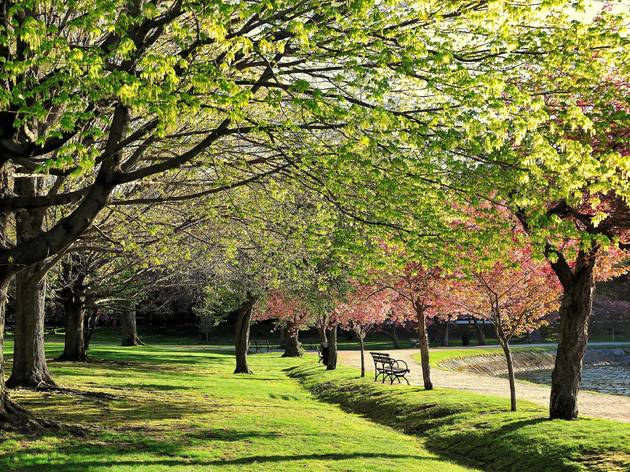 One of the world’s leading centers for plant study, as well as a lovely place to take a stroll on a nice day, the Arboretum was established in 1872 and is administered by Harvard University. The 281-acre park setting was planned and designed in collaboration with Frederick Law Olmsted. (As a National Historic Landmark, it's one of the best preserved of Olmsted’s landscapes.) Open to the public, this living collection of thousands of trees, shrubs, and woody vines is recognized as one of the most comprehensive and best documented of its kind in the world. Stop by any number of JP eateries—perhaps Ula Cafe or El Oriental de Cuba—and enjoy a calming bite in surrounded by greenery. 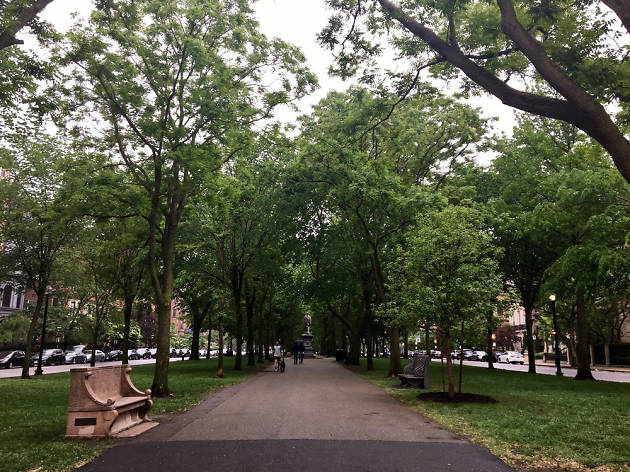 Part of the Emerald Necklace linking the Public Garden to the Back Bay Fens, this noble linear park is flanked by giant old trees, which provide shaded sanctuary during the summer heat. This is where the posh pooches are walked, and the beautiful people who frequent Newbury Street’s boutiques traverse, shopping bags in hand. Grab an authentic Italian spread from Eataly and make the short walk over to enjoy the Comm Ave Mall. 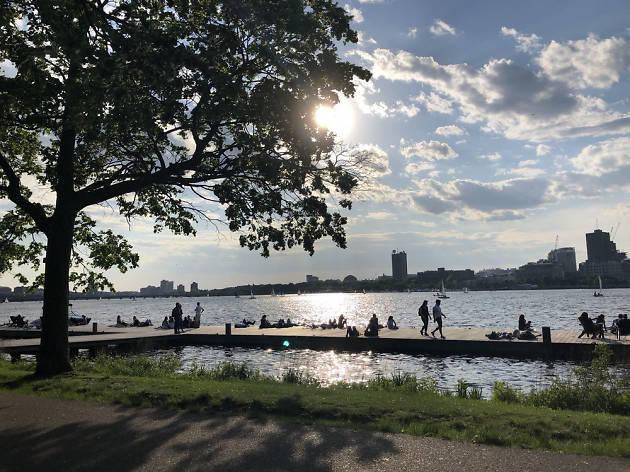 Technically, the Esplanade stretches for three miles along the Boston side of the Charles River, between the Museum of Science and the Boston University (BU) Bridge. When locals colloquially refer to the Esplanade, they're likely referring to the key stretch between Beacon Hill and the Back Bay, which becomes ground zero of the city's Fourth of July celebrations. This is a popular location for runners, but walking its paths by the river, watching as boats bob in the water, is a most soothing activity. Grab some lobster rolls from Saltie Girl or Greek treats from Gre.co and enjoy the view. 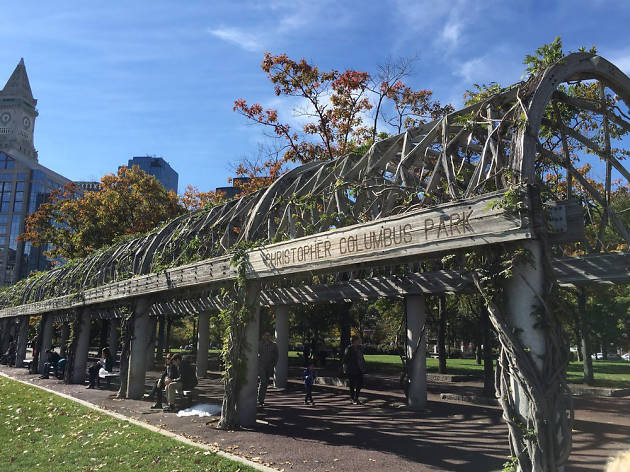 It might be small, but this harborside park is a focal point for the North End and the waterfront communities. Designated in 1974, before the Rose Kennedy Greenway sprouted from the girders and concrete of the Central Artery, it was the major green space for this area, complete with a lovely trellised avenue at its center and a lively playground. The park holds a commanding spot overlooking the harbor, and is flanked by Atlantic Avenue as it runs by the Greenway and turns into the North End. Several nearby bars and restaurants make it a popular thoroughfare. Pick up a pie from Pizzeria Regina or some savory tortas from Tenoch and check out the boats from the park. 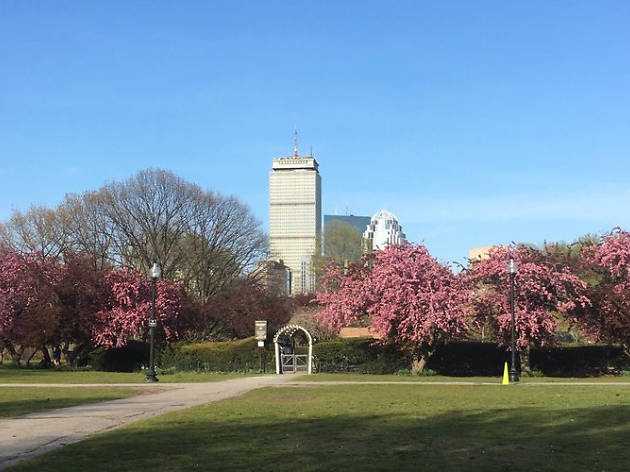 This pretty park is a reminder of the very thing that gave the Fenway its name: wetlands. It’s hard to believe that this was once tidal saltwater marshland connected to the Atlantic Ocean. But, as part of the massive landfill operation that created the Back Bay, it was cut off from the sea. As part of the Emerald Necklace development, Frederick Law Olmsted created a fresh water lagoon amongst the park’s shrubbery and trees. There are formal gardens like the Kelleher Rose Garden, where spring blooms bring color and fragrance. Throw a picnic in style by getting some best-of-the-city treats from Time Out Market Boston. Bring a few 'Gram-worthy sandos from BISq, or a savory umami bomb from Nu Burger.