The best Chicago theater of 2016

Despite offstage turmoil and uncertainty, Chicago stages offered no shortage of performances relevant and revelatory

What felt to many like a year of loss and endings was no easier on Chicago theater. Among the companies that produced their last in 2016 were a number of stalwarts. Mary-Arrchie Theatre Co. and Signal Ensemble Theatre had already announced their imminent ends before the new year began. Then, a few days before Christmas last year, Redmoon Theater announced it was ceasing operations. Oracle Productions, which took over Signal’s space this summer after being forced out of Lakeview by the same condominium redevelopment that displaced Mary-Arrchie and Strawdog Theatre Company (which is still operating while looking for a new home), would itself close abruptly before the year’s end.

Another storefront theater’s demise came with a degree of catharsis: Profiles Theatre shut its doors in June, just days after the long-anticipated publication of a Chicago Reader cover story in which a number of women and men came forward alleging a pattern of predatory behavior and abuse by the theater’s leadership going back decades.

Still other theaters reported a difficult autumn season, citing everything from the arrival of the Hamilton juggernaut to the Cubs’ championship run to election-season fatigue as factors that depressed attendance and fundraising alike. Commercial productions floundered in the fall; off-Loop survivors the Hypocrites cut short their season when the numbers failed to add up. Add the Neo-Futurists getting signature show Too Much Light Makes the Baby Go Blind pulled out from under their feet, and the city’s stalwart theater ecosystem began to feel even more precarious than usual.

Artistically, though, the bar remained high. Narrowing down a list of favorite shows of the year is as difficult as ever. If anything, it’s even more difficult, with add-on initiatives like Shakespeare 400 Chicago and the Greenhouse Theater Center’s Solo Celebration ballooning the city’s theater offerings far beyond the ability of even the most ardent individual theatergoer to see.

Well aware, and with much regret, that I missed a number of shows that might well have vied for a place on this list, I could only consider those scores of productions I personally saw this year. Despite the beefed-up international offerings of Shakespeare 400 and an especially fine year for Broadway in Chicago—including five-star entries Fun Home, The Book of Mormon and of course Hamilton (which needs no further hype nor help from us)—I've limited my list to the plethora of productions you could find only in Chicago. 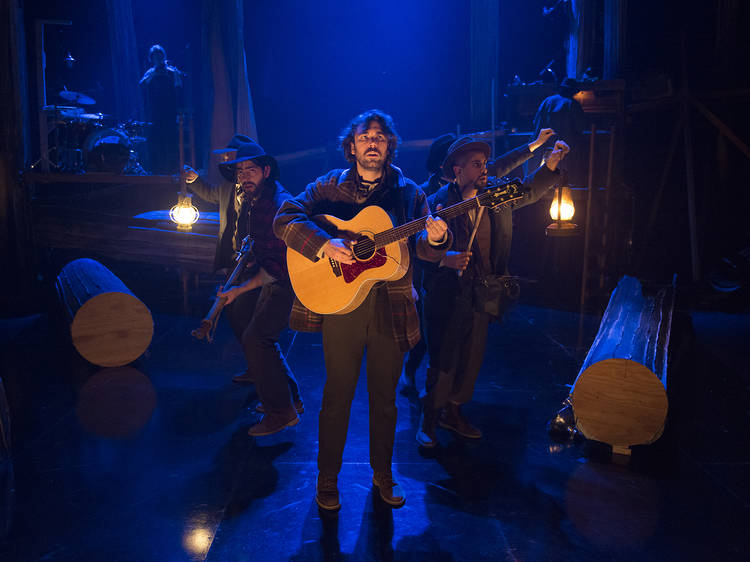 10. The Hunter and the Bear

A return visit by PigPen Theatre Co. capped a remarkable first year in Writers Theatre’s stunning new facility (more on that below). Premiering a new music-infused folktale, the seven ridiculously talented members of PigPen showed a new depth of maturity in the three years since their first appearance at Writers; for both PigPen and Writers, it showed the value of fostering long-term artistic relationships.
Read more

The Hypocrites’ fall season opener, a giddily clever fantasia that made newly empowered heroes of 19th-century literary heroines, garnered far less attention than it deserved. Rethinking the likes of the Brontës, Austen and Alcott has become almost a subgenre of its own. But Jaclyn Backhaus’s take, playful but not unserious, brought unexpected new light to the original stories, and Devon de Mayo’s inventive, inclusive production represented risk that rewarded those audiences who found it, if not the company itself.
Read more
Advertising 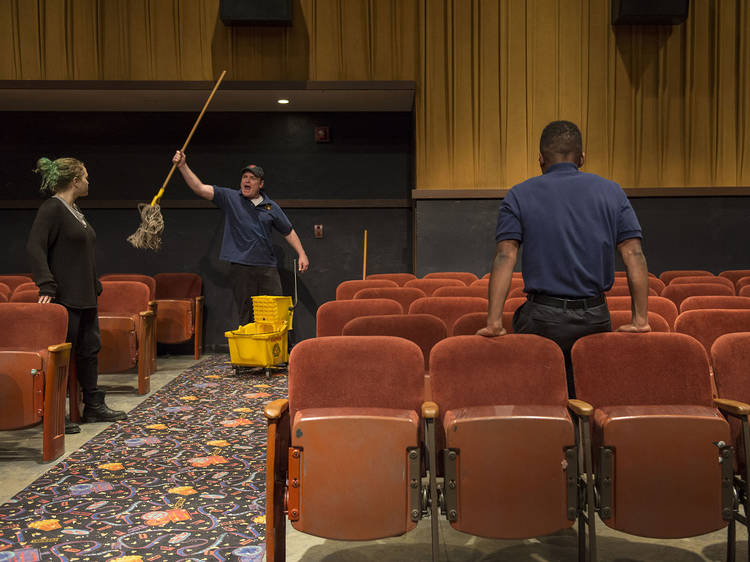 Annie Baker’s portrait of coworkers at a crumbling old movie house had already won the Pulitzer by the time Chicago got to see it. Steppenwolf’s production, helmed by Dexter Bullard, did the play justice. As slow-moving as it is just plain moving, Baker’s deceptively laconic, popcorn-sweeping action asks its cast to engage in repetitive motion and dynamic emotion. As Steppenwolf’s stunning central trio, Travis Turner, Caroline Neff and Danny McCarthy gave agile and empathetic performances.
Read more

For sheer adaptive ambition this year, not much surpassed Robert Falls and Seth Bockley’s five-hour stage transfer of the late Chilean author Roberto Bolaño’s sprawling, unwieldy and unsettling novel. It wasn’t a perfect translation—how could it be?—but the effort was admirable and impressive, with scenic designer Walt Spangler repeatedly transforming the space as strikingly as Falls and Bockley’s crack cast of 15 slipped into multiple characters and the production itself took on new forms (including among other sallies an extended film sequence). Chicago theater audiences, asked once again to give their attention to an experiment of epic scale, offered their trust and said, “More like this, please.”
Read more
Advertising 6. The Grapes of Wrath

Frank Galati’s 1988 stage adaptation of John Steinbeck’s iconic novel of the Great Depression became a seminal chapter in the history of Steppenwolf Theatre Company, the company’s first show to make it to London’s National Theatre and to Broadway, winning the 1990 Tony Award for best play. Director Erica Weiss’s summer production for the Gift Theatre reclaimed Grapes for a Chicago storefront scale, artfully cramming all of the American West into a 50-seat space. Weiss’s thoughtfully inclusive casting reaffirmed Steinbeck’s humanist themes for a 2016 in which “social justice” is a term of mockery in some corners; as the Joad family and their downtrodden peers, actors including Namir Smallwood, Jerre Dye, Kona N. Burks and Lane Flores offered resonant portrayals, accompanied by Diego Colón and Christopher Kriz’s Americana-tinged original songs.
Read more 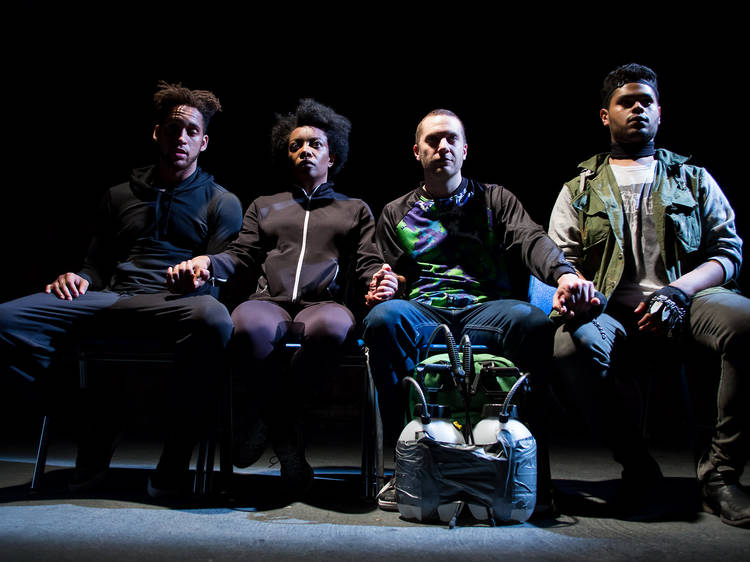 Splicing Chicago’s all-too-real violence epidemic with a comic-book-style vigilante aesthetic, Ike Holter’s premiere at Jackalope Theatre Company was a punchy street-level fantasy that was enhanced by sharply drawn characters (embodied with kinetic verve by Julian Parker, Sydney Charles, Andrew Goetten and Donovan Diaz). The superhero stylings of Marti Lyons’s staging also benefited from Michael Stanfill’s dynamic projections and Ryan Bourque’s ultra-athletic fight choreography, rivaling the summer-blockbuster thrills of any cinematic universe. Interlocking with his concurrent Sender at A Red Orchid Theatre and his upcoming The Wolf at the End of the Block at Teatro Vista, Prowess further cemented Holter as one of Chicago’s most vital young voices.
Read more
Advertising Lorraine Hansberry’s oft-neglected second play, the sole followup to A Raisin in the Sun that Hansberry saw to completion before her untimely death, is packed with very 1964 trappings but spoke all too clearly to 2016 concerns. Like The Grapes of Wrath, its questions of social justice bridged the decades to modern audiences; unlike Grapes, Brustein centered on a protagonist who wrestled with the competing pulls of cynicism and idealism. Anne Kaufmann’s imperative staging for the Goodman, populated by a searing ensemble cast, ultimately leaned toward the latter…we think.
Read more 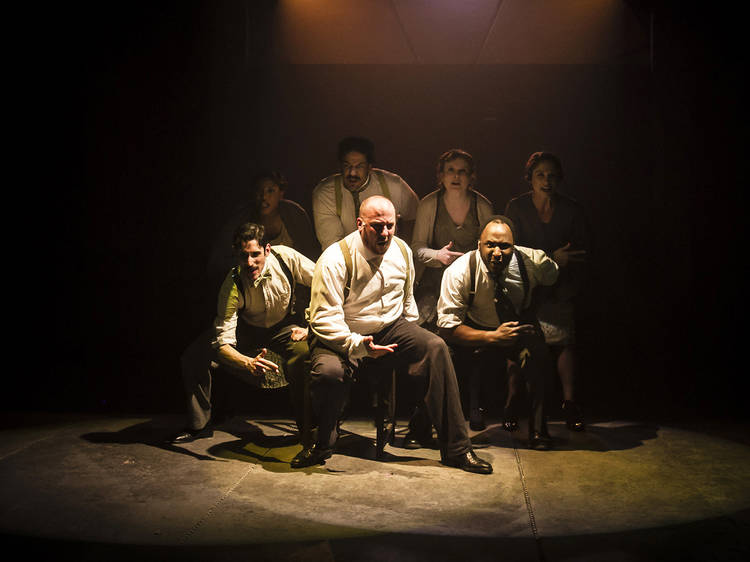 In a year in which empty populist promises to restore jobs likely forever lost to technological advancement swung the course of the country, what better environment for the return of Mr. Zero, the accountant driven to murderous rage after being replaced by a calculator? The Expressionistic antihero of Elmer Rice’s 1923 play, as musically reimagined a decade ago by writer Jason Loewith and composer Joshua Schmidt, found his way back to the Chicago stage in Geoff Button’s brutal, bracing revival, a triumph of moody atmospherics and masterful performances. If the Hypocrites ended 2016 on a down note financially, artistically they had a rich year indeed.
Read more
Advertising From last week’s release of Mayor Rahm Emanuel’s email correspondence to the president-elect’s privatization-happy nominee for education secretary, it feels like we’re inundated with opinions on public education from self-appointed experts with little experience in the field. I’d love to issue all such folks a prescription for indispensable youth troupe Albany Park Theater Project’s brilliantly immersive rendering of life in the trenches, as seen by those who live it every day—real-life high-school students. Working with Brooklyn-based theatermakers Third Rail Projects, APTP’s young artists gave audiences a remarkably rendered on-the-ground view of Chicago Public Schools from the inside out. If Learning Curve happens to get a remount next summer, perhaps we can send the mayor and the governor there on a double date.
Read more Tom Stoppard’s dense, dazzling dual-track play premiered in 1993, the same year Writers Theatre mounted its first production in a borrowed space in north suburban Glencoe. For this very English, very writerly play to be the inaugural offering in Writers’ equally dazzling new home felt all too right. Tugging equally at the head and the heart, interrogating mathematics and science as much as sex and death, Arcadia was an ideal ribbon-cutter for the company’s sparkling first year in the Studio Gang–designed facility; see also the aforementioned PigPen Theatre Co., a top-notch Bill Brown dusting off of Sondheim’s Company—well, there was hardly a bum note sounded at Writers this year. But back to Arcadia: artistic director Michael Halberstam adjusted the company’s embrace of the intimate to the new theater’s larger dimensions with precision care, and Writers recruited what seemed the ideal cast, including the consummate likes of Kate Fry, Scott Parkinson and Greg Matthew Anderson. The newly ensconced Writers showed off the right stuff right away.
Read more