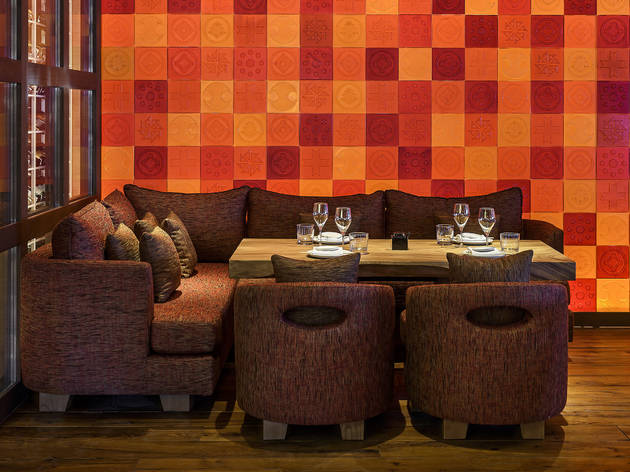 With two branches already: in Hong Kong and London, famous Japanese restaurant Zuma now has a third branch in Istanbul. The décor parallels that of the other branches, and all of the furniture, right down to the hand-made plates, is all brought from Japan. On the lower restaurant level, aside from the tables and chairs, there’s a sushi bar and a robata grill where food is prepared and served right in front of your eyes. If you aren’t there in a large group, that is where you should sit—where you can watch the food be prepared and learn from the chefs.   The menu is identical to the other branches, with the exception of a few dishes that have been adapted for Turkey. For example the Honetsaki ko-hitsujii no hat cho miso fumi, or ‘spicy curry lamb cutlet and cucumber with sesame seeds’ is specific to Turkey. Generally the menu is made up of little platters, salads, Zuma specials, tempura, soup and rice, vegetables, seafood, meat dishes, nigiri sushi, sashimi, maki rolls and other sushi rolls. Even if you don’t like sushi, you should give this place a chance. But if you’d still rather not, then you should try the robata grilled meats. And don’t forget about the Zuma cocktails.   During the day, when it isn’t too crowded, with the Bosphorus views and chill out music, you might find yourself feeling as though you’re in a zen garden. They also have set menus for lunch, but you’ll want to make a reservation if you’re planning on being there for dinner when the atmosp 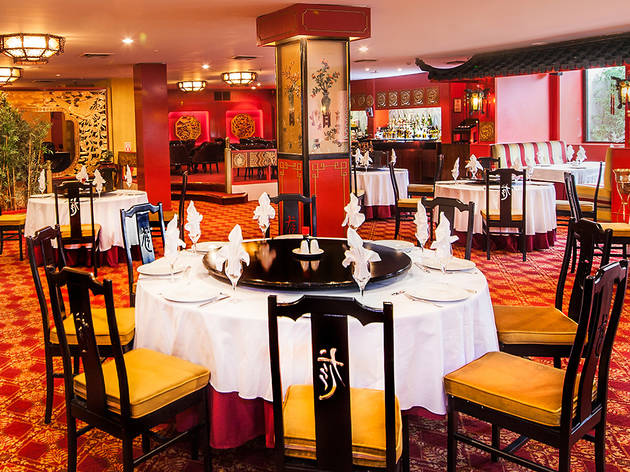 What has made Dragon so memorable over the years is the taste of their perfect food. Dragon also offers many of the typical dishes that are suited to everyone’s tastes including soup, dumplings, prawns, fish, duck, spring rolls, and rice. Peking duck, crispy duck with crepes, spicy beef and noodles, are among the customers’ favourites over the years. And with its garden overlooking the Bosphorus for the summer months, does Dragon need any more to entice you? 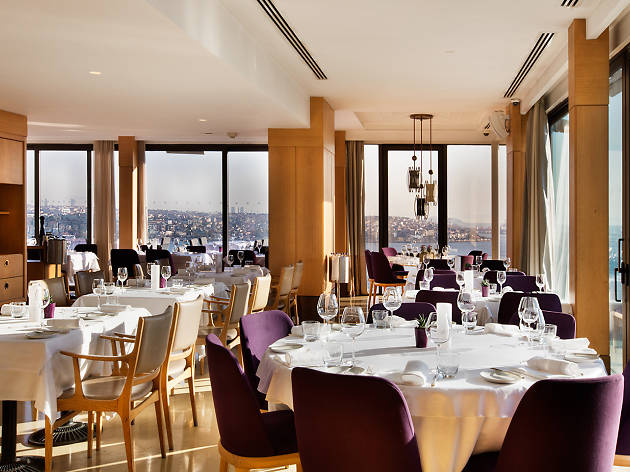 A winner of Time Out Istanbul’s Eating&Drinking Award, Vogue has been serving Istanbul from the top floor of BJK Plaza since 1997. With its minimalist decorations and unimpeded views of the Bosphorus, Vogue is one of Istanbul’s best.   The bar is open (and full) every day of the week and customers are served specially prepared snacks, and is a popular after work meeting point.   The menu changes every two to three months and features food from all over the world, which is served looking as impressive as it is delicious. Chef Ünal Yılmaz’s menu includes such entrees as pan-fried goose liver, cinnamon scallops, pastry-wrapped prawns; main courses includebresaola wrapped beef medallions, oven-baked ribs, grilled turbot fish fillets, pan-fried angler fish; and desserts include chestnut cake and sorbets.   During the summer months, they serve on their open terrace as well as the bar and restaurant. 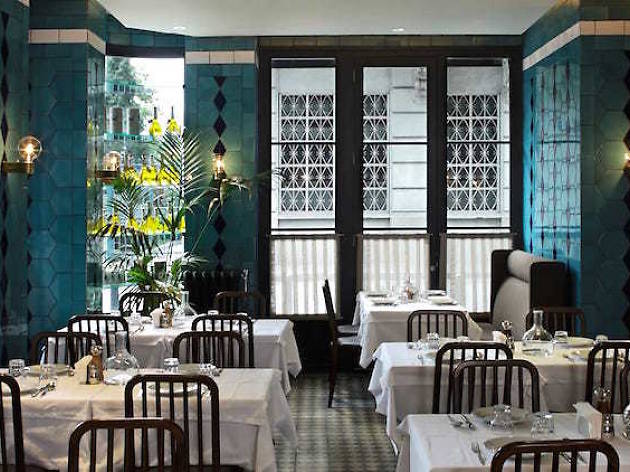 One of Istanbul's iconic restaurants and a popular lunch spot, Karaköy Lokantası is perhaps best known for its heavenly hünkar beğendi, a remnant of Ottoman palace cuisine made with slow-cooked beef on a creamy bed of mashed eggplant. At dinnertime, Karaköy Lokantası becomes one of the meyhanes in town with its outstanding meze. The fava bean purée is an excellent starter while the grilled octopus is our favourite main dish on the menu. Best enjoyed with a glass of rakı.

In 1945, when the weary days of the war were over, Beyti Güler and his father opened a modest roadside eatery in Küçükçekmece with four tables. The fame of their delicious döner kebap soon spread and the intimate affair became a 200-seat restaurant that was the talk of the town. In the late 1960s, Beyti Güler’s restaurant catered daily to Pan American Airlines, and during his first state visit to Europe, President Nixon ate Beyti’s döner in his private aircraft. To meet growing demand, Güler moved his restaurant to the upscale residential neighborhood of Florya in 1983. Güler continues to run his restaurant and holds the distinction of being the only man alive to have a kebab dish named after him. Though Beyti kebap is now served in meat restaurants and street food stalls throughout the country, it doesn’t really compare with the original, which is made from a cutlet of lamb wrapped around a loin, while its common namesake is usually made with mixed, kneaded meat. The restaurant is in close proximity to Atatürk Airport so it might be a good idea to taste Beyti’s beyti on the commute to and from your flight. 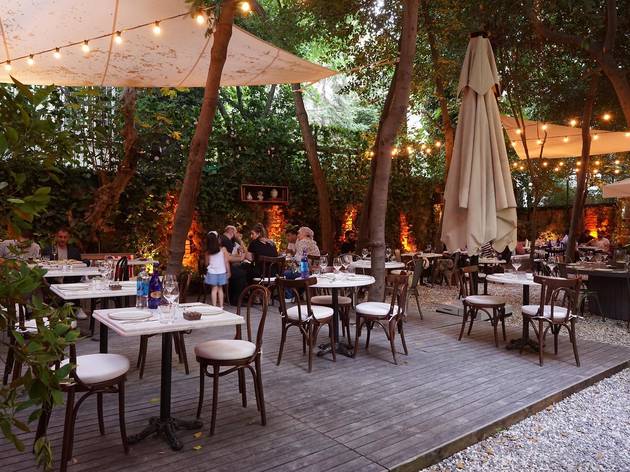 What is it? An enchanting garden-restaurant. Why go? To have some excellent food surrounded by the most romantic setting.  Emily’s Garden replaces a great Cihangir favorite White Mill that has moved to Akaretler. It has naturally also inherited its much loved garden. Judging from the outside one could easily be fooled to think this a minimalist cafe. However nothing can be further from the truth. Once we ascended the stairs leading into the space a comfortable space with a long bar and tables alongside it welcomed us. The real pleasure is to be found if you venture out a little further and follow the stairs down to the back to the enchanted garden. The place comes alive particularly at night with the glow of lights that hang from the trees. The venue is managed by Oğulcan Engin. The fact that this is a considerate establishment that prefers a no music policy so as not to disturb the neighbours was much enjoyed by us as it enabled us conversate with ease. A rare treat these days. As a main course filetto porcini di manzo (75 TL) was a very satisfying plate. 220 gram veal tenderloin is accompanied by mashed potatos with truffle oil and grilled vegetables. Amongst the pastas casa nostra (58 TL) was our favourite. With its tranquil athmosphere this is an ideal venue for closing a busy day. It is equally charming for breakfast and brunch. 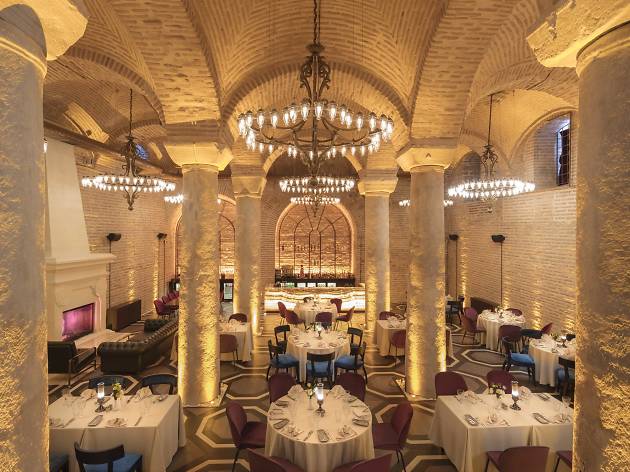 What is it? A chic restaurant that dwells inside a historic water cistern. Why go? To dine in an unforgettable setting. Head over to the Historical Peninsula’s Soğukçeşme Sokak for a dining experience unlike any other. Situated inside a 1500 year-old cistern, Sarnıç Fine Dining Restaurant is a bucket-list worthy spot for tourists and city-residents alike. This historic structure of a restaurant, with its giant columns and mesmerizing domed ceiling, provides an extraordinary ambience. As for the food, the restaurants Ottoman inspired menu is an absolute treat. We reccomend ‘The love story of Hero and Leander’ (40 TL), a traditional vegetable patty dish with a kinoa twist, topped with walnut stuffed meatballs and tsatsiki. Go for the ‘Magnificent salmon trio’(68 TL) for a plate of smoked salmon, salmon tartar and a fillet of teriyaki. As a main course, we suggest ‘the Venetian in the harem’ (140 TL), a truffle-oil infused beef medallion dish served with oyster mushrooms and goat’s cheese. You’ll also get the chance to listen to some live music while enjoying your food at this unique restaurant. 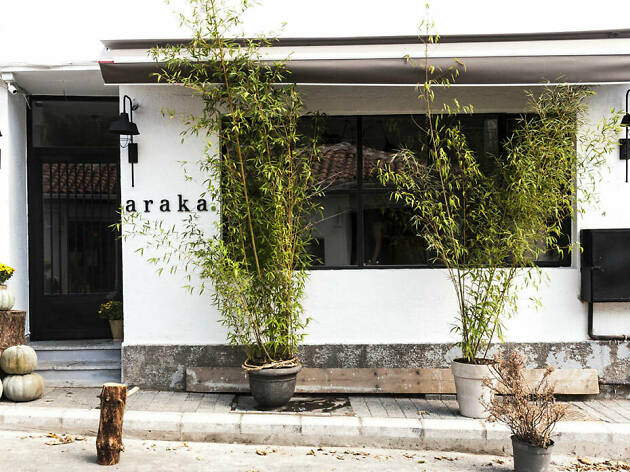 Some of you might remember Cihan Kıpçak from the fine-dining restaurant Gile, as well as from the gastro-pub Akali, which he opened with his older brother Çağlar. Now the duo has changed course for Galata, where they’ve opened their new bistro named Araka. Located behind the concept store selfestate, Araka serves a daily menu that Cihan Kıpçak defines as “light dishes with modern touches.” The bistro doesn’t yet have a bread oven, so for the time being, all of the breads are transported from Akali and paired with fillers like turkey ham, Emmental cheese and the Tunisian hot chili pepper paste harissa. The daily salads and sandwiches are all priced 18 TL. The arugula salad with red beets, goat cheese and a balsamic reduction and the cabbage salad with smoked ribs are sure to satisfy even those who usually turn up their noses at salads. The desserts are equally light, like the apricot jelly with mascarpone cheese and a chocolate base with only 5% added sugar. 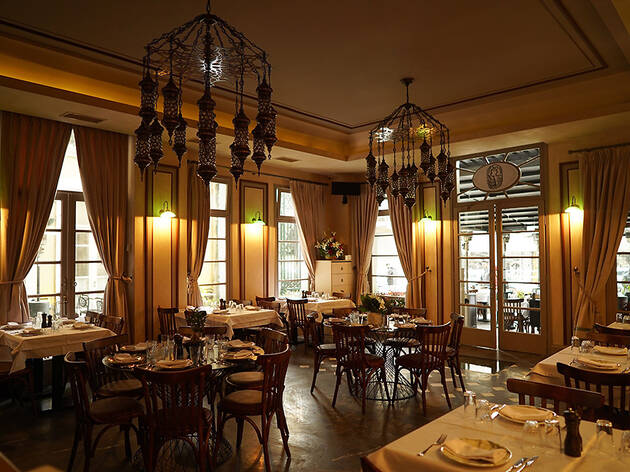 LÜSYEN RECENTLY OPENED in Karaköy’s Fransız Geçidi in the space formerly occupied by Bej. The name comes from a French woman who crossed paths with iconic figures such as Tevfik Fikret, Nazım Hikmet and İsmet İnönü and who was once involved with the playwright Abdülhak Hamid Tarhan. She even once shared a dance with Atatürk. Apart from the name, there is also a feeling of France in the air at Lüsyen. Inside the lounge, there is an elegant bar and a stage in the corner with a red floor. The marvelous chandeliers hanging from the ceiling and the long curtains on the windows evoke a cabaret-like atmosphere. The tables are huddled close together for the purpose of ensuring a sincere atmosphere. After their many years in the restaurant business, owners Mert Özsarıkaya and Doğan Akbaş have finally opened their own establishment with Lüsyen. While the decor and ambience create a European feel, the menu and the music remain traditional. They highlight that this is not a ‘new-generation’ meyhane, and have made a point to create a genuine atmosphere for live music. One of the mezes that got our attention was the aşk otu (20 TL), a dish similar to samphire. The basil spread with roasted pistachios (20 TL) and the ahtapot beğendi (50 TL), an octopus dish, are among the original dishes on the menu. The tuzda balık (320 TL) can be easily shared between four people. Lüsyen opens early for lunch but the real fun naturally starts in the evening. Based on the phone calls the waiters take thro