A new addition in Luang Prabang, the Azerai hotel makes for a good base when exploring this soulful Unesco-listed old town

Sometimes, the things you want the most are those hardest to get; for many travellers, that would be the chance to stay in an Aman resort. A regular figure in all the top hotel lists, Aman is preceded by an illustrious reputation, known for its storied locations, minimalist yet timeless designs, but also astronomical prices.

The good news is, Aman founder Adrian Zecha has a new hotel brand that could just be the antidote to your Aman lust without depleting your life savings. Named Azerai, the brand recently opened its first property in the Unesco World Heritage Site of Luang Prabang in Laos. Positioned as an affordable luxury, Azerai Luang Prabang’s simple elegance and liberal use of natural wood are a nod to Aman (or perhaps Mr Zecha’s personal style) – but beyond that, it’s a distinct hotel in its own right.

Despite being smack in the middle of the town’s heritage core, there’s a relaxed vibe here. Built in the style of French colonial architecture in respect of its locale, the hotel is handsome. Everything revolves around the swimming pool in the centre, shaded by a stunning 120-year-old Banyan tree. There’s also a bar and bistro facing the street, which serves a modern take on Laotian and regional cuisines highlighting local ingredients. 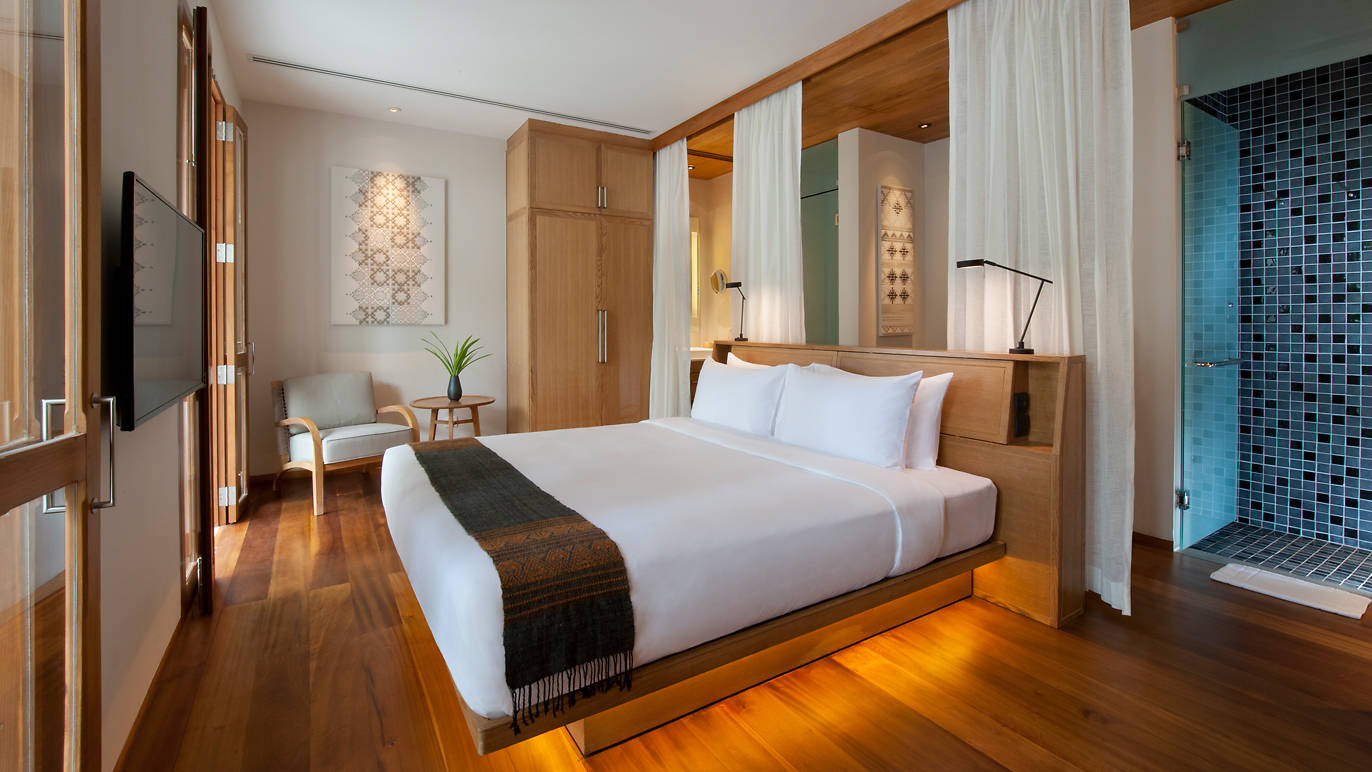 Overall at Azerai, the aesthetics are clean and linear. There’s a sense of restraint to keep flourishes to a minimal, focusing instead on functional designs to maximise space and encourage relaxation. The rooms open out to either a balcony overlooking the pool or a private courtyard, and they feature twin vanities, free WiFi, coffee machine, rain shower and a host of other amenities.

In terms of location, Azerai Luang Prabang is perfect. You’re not entirely removed from the town’s daily life: The hotel’s just across the junction from the main street, where you’ll find the daily night market and also the highest concentration of restaurants, cafés and temples. Mount Phousi is also right opposite. The 100m hill serves as the unofficial town centre; the view from the gilded stupa at the top is breathtaking.

From the hilltop, you’ll understand the appeal of this historic town. Luang Prabang is a narrow peninsula where the mighty Mekong and Nam Khan rivers meet, and it’s protected by a fortress of mountain ranges. This lush and fertile land was once the royal capital of the country, where Buddhist culture and spirituality flourished. In fact, the latter still defines much of life here, evident from the number of active temples in this small town (there are more than 30) and the perseverance of the daily alms-giving ritual. Saffron-robed monks still roam the streets, just as the coconut trees here loom taller than the man-made structures, many of which date back to the 19th century.

No doubt Luang Prabang is a living heritage. While many old towns in the region seem to transition into the modern age, Luang Prabang still feels like it’s stuck in time; this palpable sense of nostalgia is its best attraction. And at Azerai Luang Prabang, you’ll get the best of both worlds: direct access to this old world charm without losing the comfort of modern day conveniences.

Things to do in Luang Prabang

If you only visit one temple, make sure it’s Wat Xieng Thong. This elegant temple is one of the most important monasteries in Lao Buddhism. It also features some of the best preserved traditional temple art, particularly the glass mosaic works.

The morning market is best for sampling local dishes, such as the nem kao (steamed rice roll with meat and herb filling; similar to chee cheong fun) and the rich local coffee that’s served with a weak tea chaser. If you’re looking for the ethnic textiles and crafts Luang Prabang is known for, you’ll find a colourful variety at the night market.

Participate in the morning alms-giving ritual

This Buddhist alms-giving ceremony is a highly revered tradition where locals make offerings (usually food) to the monks. It’s important to be respectful: Always kneel while giving alms, and never intrude or interrupt the proceedings. The daily ritual usually starts at the break of dawn just before 6am.

The multi-tiered Kuang Si Falls are known for their unusual turquoise water. The cascading stream collects at several shallow pools which are perfect for swimming. Best explored as a half-day trip; don’t forget to visit the bear sanctuary on your way in.

A new attraction in Luang Prabang, the botanical garden is a showcase of the country’s rich flora. It also serves as an education centre on local medicinal plants and herbs, and there’s an idyllic café on site. The experience includes a leisurely boat ride along the Mekong river, which shuttles you back and forth from the reception centre in town.