My Account My Profile Sign out
My Account
Search
Worldwide Europe United Kingdom England London Inside the dollhouse: the secrets of one of London’s oldest mannequin factories
Advertising

Highams park has a secret. The suburb, which lies just above the north-eastern cusp of the North Circular, might seem sleepy and unassuming – there’s a big Tesco, a Screwfix and rows of duplicate detached houses – but it’s actually home to something much more unusual. Here, hidden away on a backstreet, lies Proportion London: an eerie, sprawling warehouse space that’s filled with torsos, disembodied limbs and plastic-wrapped heads.

Part mannequin factory, part London institution, Proportion has been an integral part of the capital’s arts and retail industry for nearly a century now, although you wouldn’t think it given its obscure location. Chances are you’ve already seen hundreds – even thousands – of its mannequins just from walking down the high street. The company’s faceless creations are everywhere: frolicking in the windows of chains like Marks & Spencer, Primark and Topshop, as well as in the more lavish displays of Alexander McQueen, Vivienne Westwood and Burberry. 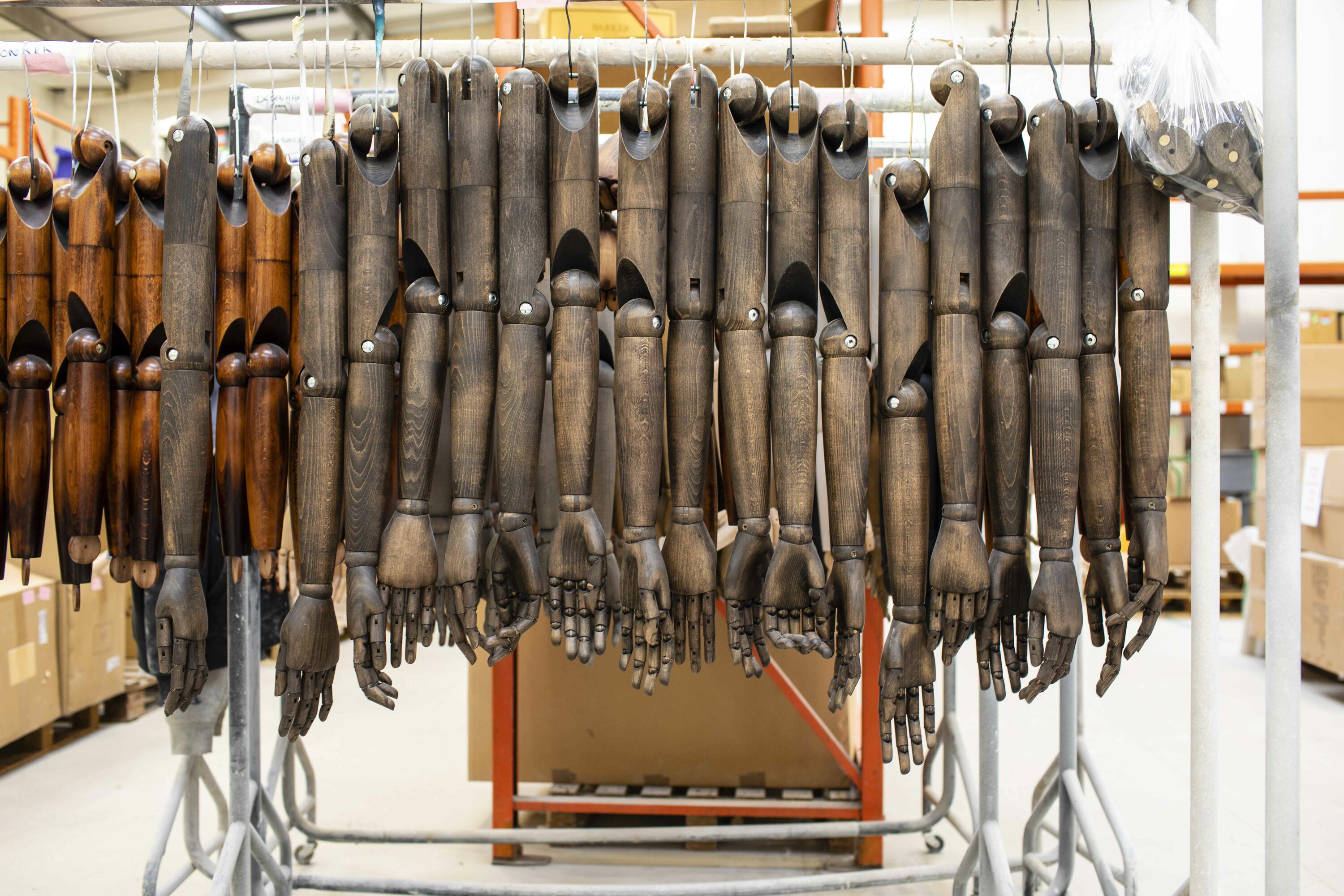 Their looming presence isn’t just limited to shop displays. Name any major UK fashion exhibition from the past few years and it’s likely that Proportion was involved in some way (its mannequins have been a key part of V&A shows, from the recently launched ‘Christian Dior: Designer of Dreams’, to 2015’s Alexander McQueen tribute ‘Savage Beauty’ to last year’s Frida Kahlo exhibition, ‘Making Her Self Up’).

In the ’80s retailers tended to opt for larger hair

‘Our client base is incredibly diverse,’ says Jade Wheeler, Proportion’s marketing manager. ‘We craft figures for world-leading exhibitions at museums such as the Victoria and Albert Museum and The Metropolitan Museum of Art… We’re yet to be defeated by a brief.’

The company has been the trailblazer of the mannequin world since it was founded in France in 1867. Back then, it was known as Siegel & Stockman, and prided itself on its lovingly handcrafted models made from fibreglass and papier-mâché, which it would then sell to couture houses and dressmakers’ showrooms. The company began trading in London in the 1920s, eventually changing the name of the British branch to Proportion in the 1990s. It moved its official factory base to a former tram depot in Walthamstow in 2002. 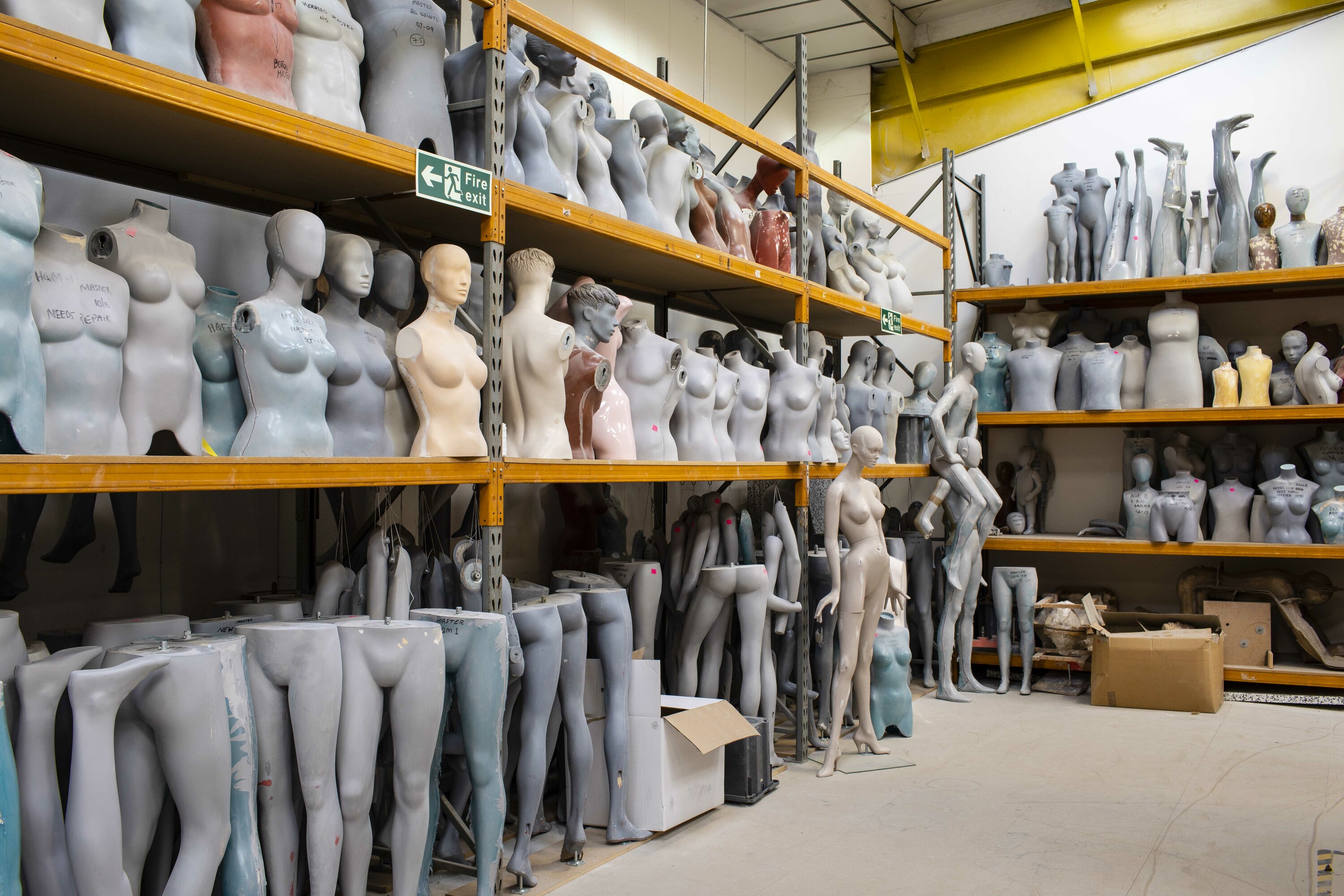 Today, Proportion conducts its business entirely from its Highams Park manufacturing warehouse, which it moved to in 2015. It’s an easy-to-miss spot, guarded by steel palisade fencing, warning signs and industrial roller shutters – almost as if it was purpose-built for keeping secrets. When I visit the site on an icy morning, I nearly walk straight past it

Despite the abundance of space, Proportion remains a relatively small company, explains museum sales manager Hannah Kralev, as she takes me on a guided tour through the cavernous rooms. She talks through the manufacturing process: each stage has its own room, which tends to be inhabited by one person, some random fibreglass body parts and echoes of soft, distant jazz.

A giant Hagrid with a bulbous belly particularly stands out

‘It takes several different departments to make a mannequin, starting with design, through to sculpting, model making, mould making, lamination then finishing and spraying,’ explains Wheeler, who joins the tour. ‘The development process can take weeks or months, depending on the complexity of the product.’

The tour of the factory begins on the top floor. As well as being the home of the design, moulding and development process, this upper part of the building is dominated by corridors of stored mannequin moulds. These are mostly made up of headless, slender female torsos, which appear in their hundreds, as well as the odd outlier (a giant Hagrid, complete with a bulbous belly, is one that particularly stands out among the slimmer models). According to Kralev, the company has to make several copies of its original designs in case any are lost or damaged. They’re then stored in dark, motion-sensor-lit corridors. It certainly makes for an uncanny set-up on a gloomy winter morning. 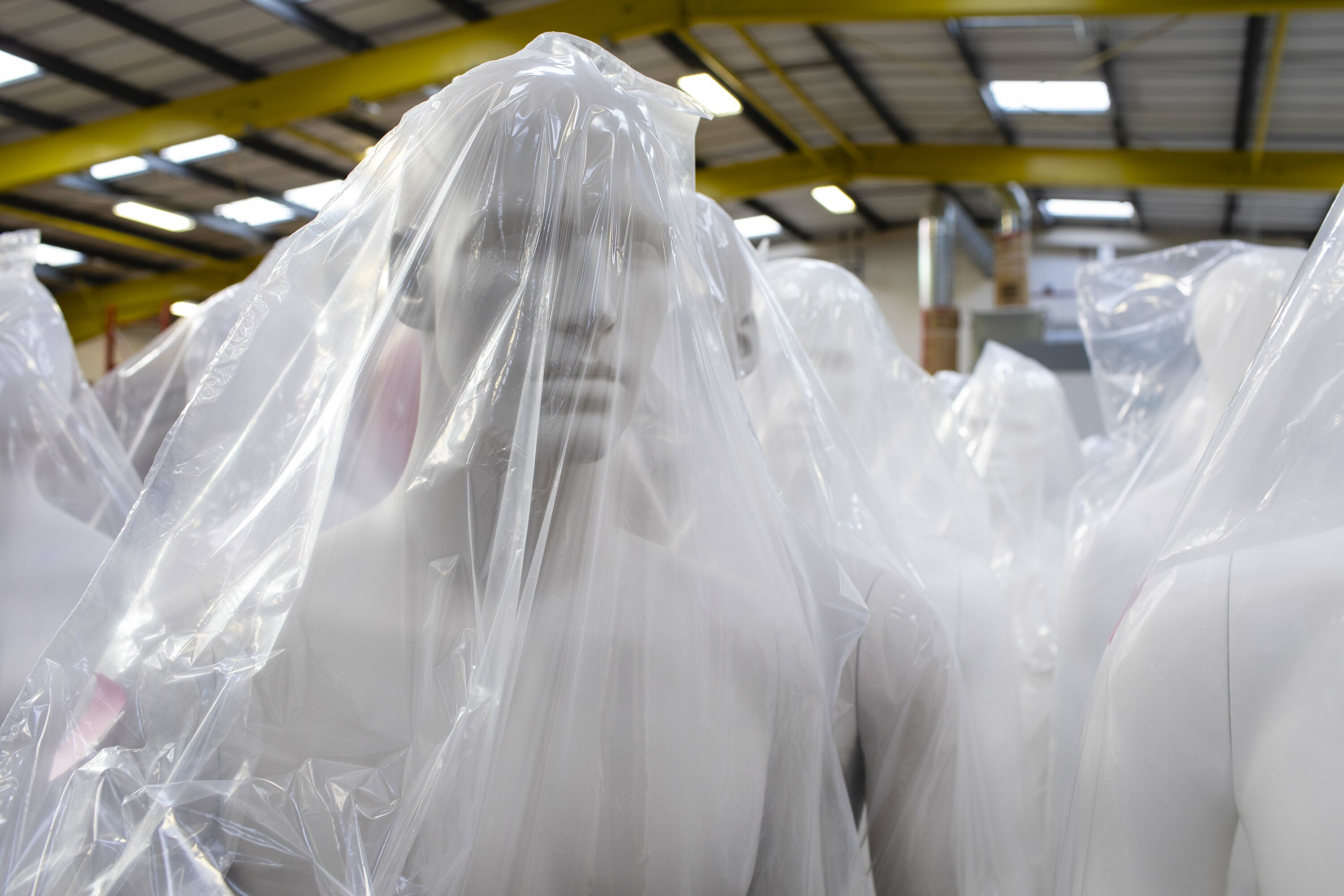 Downstairs, the factory draws its focus to the papier-mâché process. A staff member stands solemnly in one room, carefully layering recycled paper and eco-friendly paste across one of the moulds, before placing it in the ‘oven’, which is a warm room where the designs are left overnight. They are then refined, finished in the client’s desired style, packaged and shipped off.

As we head back upstairs, I notice a pile of smiling women’s heads in the far corner, wrapped tightly in plastic. I decide it’s best not to ask about those. Somewhat predictably, the majority of mannequins I see in the factory are tall – the average height for a female model being between 5'8" and 5'11" – and svelte, with flat stomachs and lithe limbs.

It’s a strange feeling, looking at all these toned, perfect bodies huddled together. I find myself regularly checking my posture. At one point, I even catch myself gazing longingly at a pair of discarded legs with impossibly small but enviably graceful feet.

Proportion is quick to note that it does offer a range of sizes. Clients can order a wide variety of different models including a maternity range, plus-size versions, children, men and more abstract figures. In one of the more haunting rooms, a mannequin head with a towering neck and no attached body watches me silently from above a cupboard. 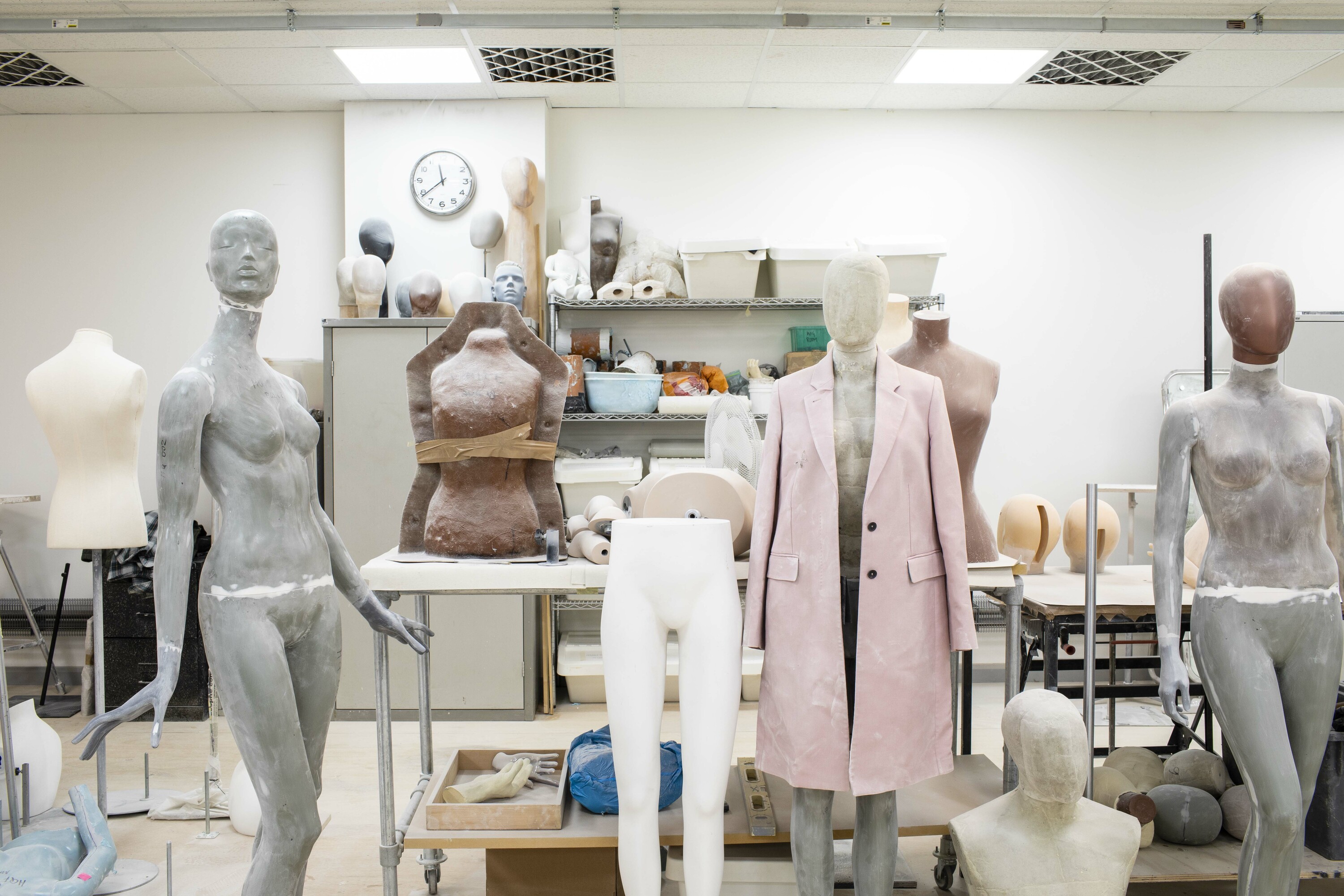 I’m told that the only real change in demand through the years has been about the face: in the ’80s retailers tended to opt for more lifelike features with larger hair, but that has died off in recent years. Now, the more abstract the better. ‘Trends come and go,’ says Wheeler. ‘Our collections are made to suit the ever-changing demand.’

Eventually the tour comes to an end and it’s time to step outside of this strange world of featureless figures and ominous, long-limbed creatures. As the door shuts, and the cold light of day illuminates the industrial backroads of Highams Park, it reverts back to being just another warehouse on just another street – its mysteries lying hidden away.

Wanna know what else is made in London? 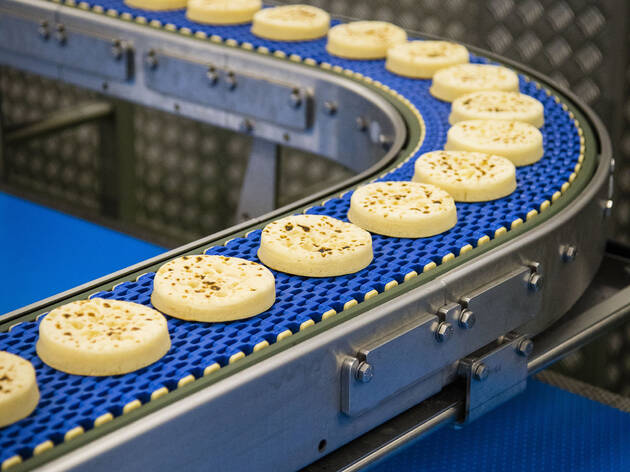 It’s not much to look at from the outside – just a giant grey corrugated metal shed with a huge, bright orange Warburtons sign. But inside, it’s a different story.