It comes to something when a museum can lay claim to having been opened as Queen Victoria’s last public engagement. In 1899, the current premises of the V&A enjoyed that privilege. It has gone on to become one of the world’s – let alone London’s – most magnificent museums. It is a superb showcase for applied arts from around the globe, appreciably calmer than its tearaway cousins the Science Museum and Natural History Museum on the other side of Exhibition Road. All three museums would be must-visits in another city, but it is the sheer beauty of the V&A that keeps it closest to our heart.

The details? There are some 150 grand galleries over seven floors. They contain countless pieces of furniture, ceramics, sculpture, paintings, posters, jewellery, metalwork, glass, textiles and dress, spanning several centuries. You could run through the highlights for the rest of this guide, but key artefacts include the seven Raphael Cartoons, painted in 1515 as tapestry designs for the Sistine Chapel; the finest collection of Italian Renaissance sculpture outside Italy; the Ardabil carpet, the world’s oldest and arguably most splendid floor covering, in the Jameel Gallery of Islamic Art; and the Luck of Edenhall, a 13th-century glass beaker from Syria. The fashion galleries run from 18th-century court dress right up to contemporary chiffon numbers, while the architecture gallery has videos, models, plans and descriptions of various styles.

Over more than a decade, the V&A’s ongoing FuturePlan transformation has been a revelation – more than 85 percent of its public spaces have been restored and redesigned. The completely refurbished Medieval & Renaissance Galleries are stunning, but there are many other eye-catching new or redisplayed exhibits: they were preceded by the restored mosaic floors and beautiful stained glass of the 14th- to 17th-century sculpture rooms, just off the central John Madejski Garden, and followed by the Furniture Galleries – another immediate hit. The ambitious Europe 1600-1815 Galleries – centred around a stunning four-metre-long table fountain, painstakingly reconstructed from 18th-century fragments – collect European clothes, furnishings and other artefacts. Or there’s the Toshiba Gallery of Japanese Art, exhibiting 550 works running from the sixth century AD to the first Sony Walkman and an origami outfit by Issey Miyake. On a smaller scale, the Ceramics Galleries have been renovated and supplemented with an eye-catching bridge; and the Theatre & Performance Galleries took over where Covent Garden’s defunct Theatre Museum left off. Newer additions include the museum’s ‘Rapid Response Collection’, which features examples of contemporary design and architecture reflecting important news events, while the major temporary exhibitions – Alexander McQueen, David Bowie and Frida Kahlo – are frequently blockbuster sell-outs.

Summer 2017 saw the opening of a new entrance, directly into the heart of the museum from Exhibition Road, through the porcelain-tiled Sackler Courtyard to the purpose-built Sainsbury Gallery. It’s a fitting introduction to a fabulous museum. 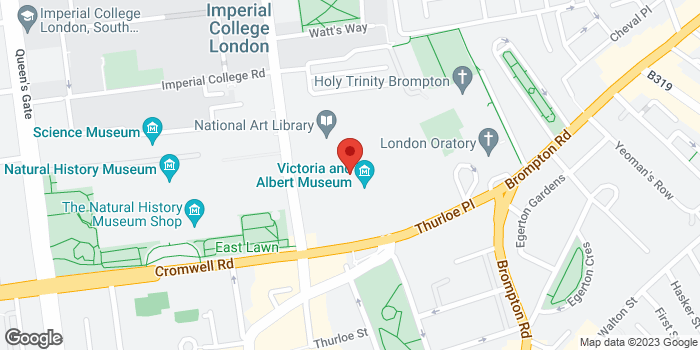 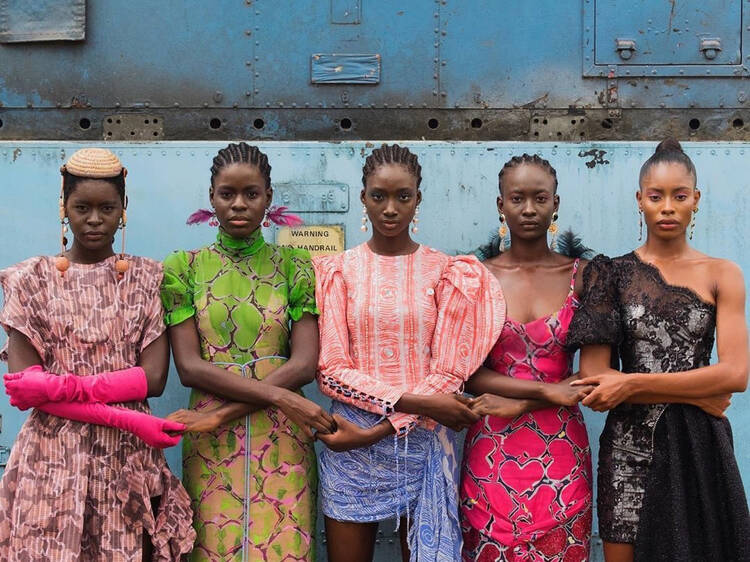 The V&A’s ambitious new exhibition is a triumphant attempt to complete the near-impossible task of capturing an entire continent through its fashion. Incorporating textiles, design and still and moving images, ‘Africa Fashion’ takes visitors on a compelling journey from the 1960s to the present day in a bid to reshape existing geographies and narratives of style. It feels like a glorious celebration. There’s joy in the key points that punctuate the show: a brilliant pink outfit of trousers and kinetic cape by Imane Ayissi from 2019 bams you straight in the eye as you enter. The second floor is dominated by Artsi Ifrach’s Maison Artc ‘A Dialogue Between Cultures’, with its organza, ribbon and plastic-fishbone crinoline, dress and mask at the top of the stairs, while James Barnor’s gorgeous Kodachrome photographs hail us like old friends in an embrace of colour. But there’s also pleasure in the quieter examples: a salt-crystal necklace by Ami Doshi Shah, Ibrahim Kamala’s loving 2022 photographic homage to trailblazing designer Chris Seydou’s 1980s ensemble, the assurance of Gouleh Ahmed’s images of non-binary people. While these moments accrue, there’s never a sense of being overwhelmed by content, there’s a confident restraint, a balance between the headliners and the new kids on the block which always keeps things fresh and unflagging. Identity and Blackness are core here, and while there’s a political dimension working through the narratives and choice of contemporary design 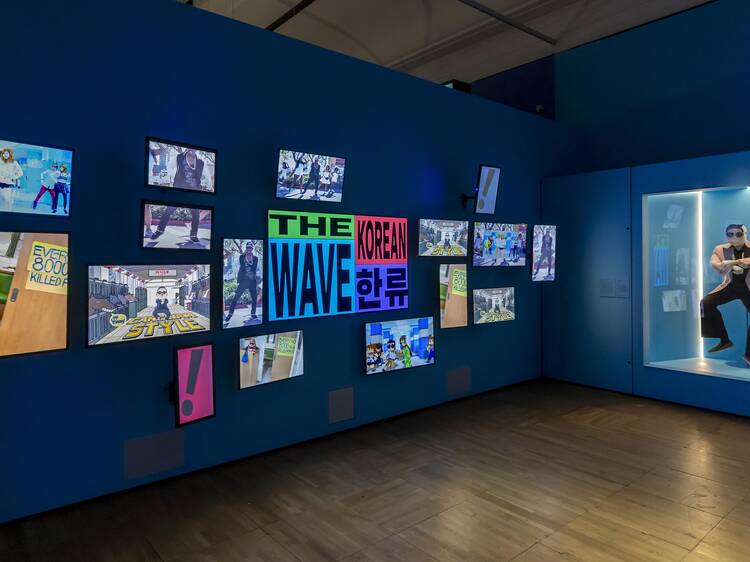 The V&A’s latest exhibition starts with an immediate bombardment of wild, joyous neon, video, and the all-too familiar melodies of ‘Gangnam Style’. Psy’s viral dance craze is a brilliant example of ‘Hallyu’, the South Korean pop-culture phenomenon that has ignited imaginations across the globe. This blockbuster exhibition is a sensitvely researched, mind-boggling and ambitious attempt to record its explosion in recent years, through everything from cinema and television to music, fashion, beauty and tech. To start, propaganda leaflets and documentary photographs guide us through a concise Korean history lesson from the Joseon dynasty to the 1950 Korean War and into the country’s abrupt embrace of technology. Here, powerhouses like LG and Samsung are part of a constant stream of innovation that filters into every area of life. There’s a cultural optimism here that’s summed up well by artist Nam June Paik’s 1986 installation ‘Mirage Stage’; vast towers of video screens buzz and flicker, creating loops of early internet nostalgia to signal the start of the revolution in digital communication. Be it TikTok, music videos, or early 2000s mobile phone formatted ‘Webtoons’, this is how Hallyu was propelled to the rest of the world, allowing it to fuse with Western influences. But it’s always a carefully tread line. The Squid Game boiler suits are displayed next to traditional hanbok costumes, and a 1990 photograph shows Korean filmmakers protesting for the protection of their domesti 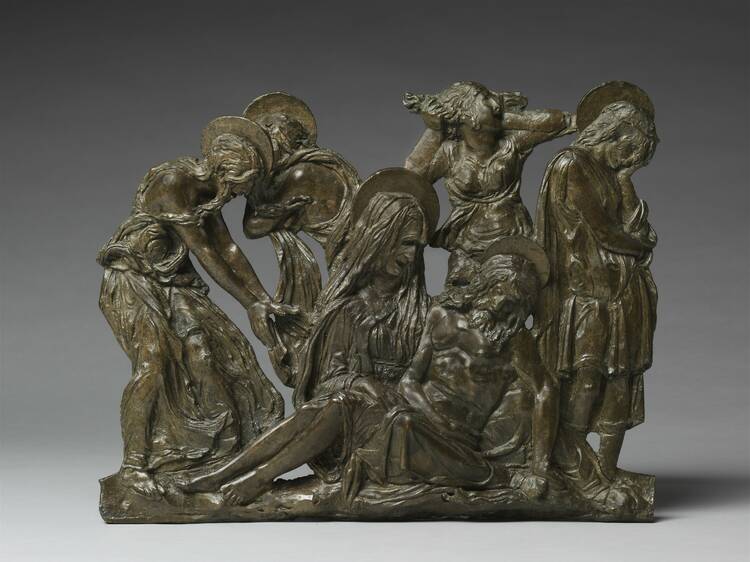 One of the greatest sculptors of our times finally gets a major UK exhibition for the first time. Renaissance master Donatello’s exceptional talents will be showcased in this show which will explore his impact on a crucial time in the history of art and feature many works that have never been on display in the UK including Donatello’s early marble David and bronze Attis-Amorino from the Museo Nazionale del Bargello, Florence.